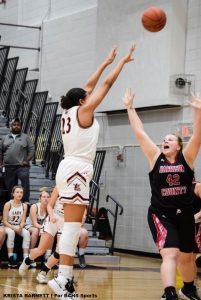 LETTING IT FLY – Freshman center Jhaven Meade, who dominated the paint all game long, got this shot attempt off just in front of Harrison County’s Gracie Hughes. Meade finished her night with 15 points, 7 rebounds and 7 blocks.

PARIS – Over her last seven games, Lady Colonel junior guard Lyndsay Johnson was in a shooting slump that every player experiences during a season. From high school to collegiate as well as the professional level, it will happen. And the only way to come out of a shooting slump, is shoot the basketball. Last night, inside Russ Day Gymnasium, Johnson did that and some.

Behind Johnson’s season-high 21 points, the Lady Colonels advanced to Saturday’s

Kentucky 2A Section 5 Championship game after eliminating Harrison County 61-41, avenging last season’s loss to the Fillies in this same tournament.

With the victory, Coach Bill Watson’s team will now have a shot of making the 2A State that will be held inside the SportsCenter in Owensboro next week with a win over a very good Vikings team from Rowan County (8-7). Rowan is led by freshman guard Haven Ford, who surpassed the 1,000 point mark during their 72-45 runaway victory over 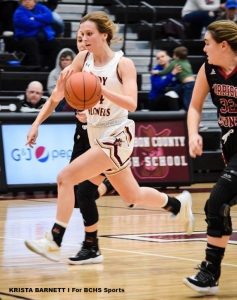 CATCH ME IF YOU CAN – After getting the steal, one of her 6 on the evening, Lady Colonel junior Lyndsay Johnson blew by two Harrison County defenders on her way to two of her season-high 21 points during her team’s 61-41 victory last night over the Fillies. Johnson scored more points over the first three quarters than what she did in her last four games combined.

Pendleton County last night during the first game. One thing to note, both teams have faced and lost to a common opponent here recently in Rockcastle County. The Lady Colonels dropped their decision to the Lady Rockets by 3 points (57-54) and the Vikings lost by 8 (58-50).

Both teams started this 2A Section 5 semifinal game in different directions.

A three from junior guard Elizabeth Allison and a pull-up jumper by sophomore guard Gabrielle Hatterick, saw Coach Kim Marshall’s Fillies race out to a 7-2 lead.

Bourbon, once they settled down, came charging back behind the scoring of Johnson, junior guard Hannah Hamelback and freshman Jhaven Meade. Watson’s team closed the quarter on an 8-3 run to get even with the Fillies at 10-all.

The second quarter turned into the Johnson show.

A three by Allison pushed the Fillies in front 13-10. Moments later, Johnson started her scoring spree.

Three straight trips down the floor led to buckets by Johnson off of Harrison County turnovers. The first was a follow up basket and then she hit a nice layup off an assist from Meade. “LJ” ended her mini scoring run with a three from the left wing. Tack on McLain Murphy’s five straight points and just like that, Bourbon held a 22-16 advantage.

Harrison got to within 24-20 but Johnson answered that by ending the half with back to back baskets to give her team a 28-20 lead at the break. “LJ” finished the half with 14 points, which was pretty impressive, considering the fact that she only scored 18 points in her last four games combined. 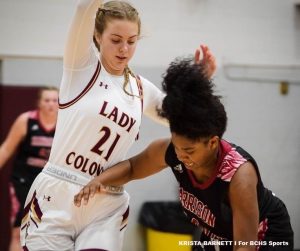 PLAYING THAT “D” – Bourbon County junior McLain Murphy made it tough for Harrison County’s Sylvonya Williams to find a teammate after playing some up close and personal defense on the Fillies’ senior guard.

During the third quarter both teams played pretty evenly until the Lady Colonels closed the period on a 6-2 run to push their margin from 32-27 to 38-29 heading into the final eight minutes of action. That run was highlighted by a driving lay-up by Jaydyn “Shorty” Goodwin and consecutive scores from Johnson.

The fourth quarter was all Bourbon.

An old fashion three-point play by Murphy, followed by a short jumper from Meade, increased Bourbon’s run that expanded over two quarters to 14-2. From there, the Lady Colonels kept pouring it on as Harrison, after receiving two straight threes from Katelin Ecklar, closed it to 46-35, never threatened the Lady Colonels the rest of the way as Watson’s team cruised home for the 20 point win and end their four-game losing skid to the Fillies. 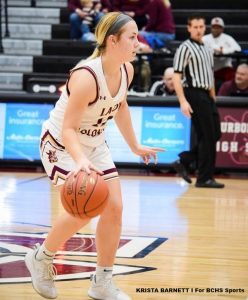 “Thought we were good again defensively and played with a lot of energy,” Coach Watson said afterwards. “Difference in tonight and earlier games is we made some shots. Hopefully, it will bode well for us down the road.” The Coach added that they also received some great minutes from their bench.

To go with her 21 points, Johnson had 7 rebounds, 6 steals and 4 assists to fill out her

Allison paced the Fillies with 12, Ecklar had 11 and Hatterick finished with 9 points. Rounding out HC’s scoring were Gracie Hughes with 4, Sylvonya Williams 3 and Kara Hines 2.