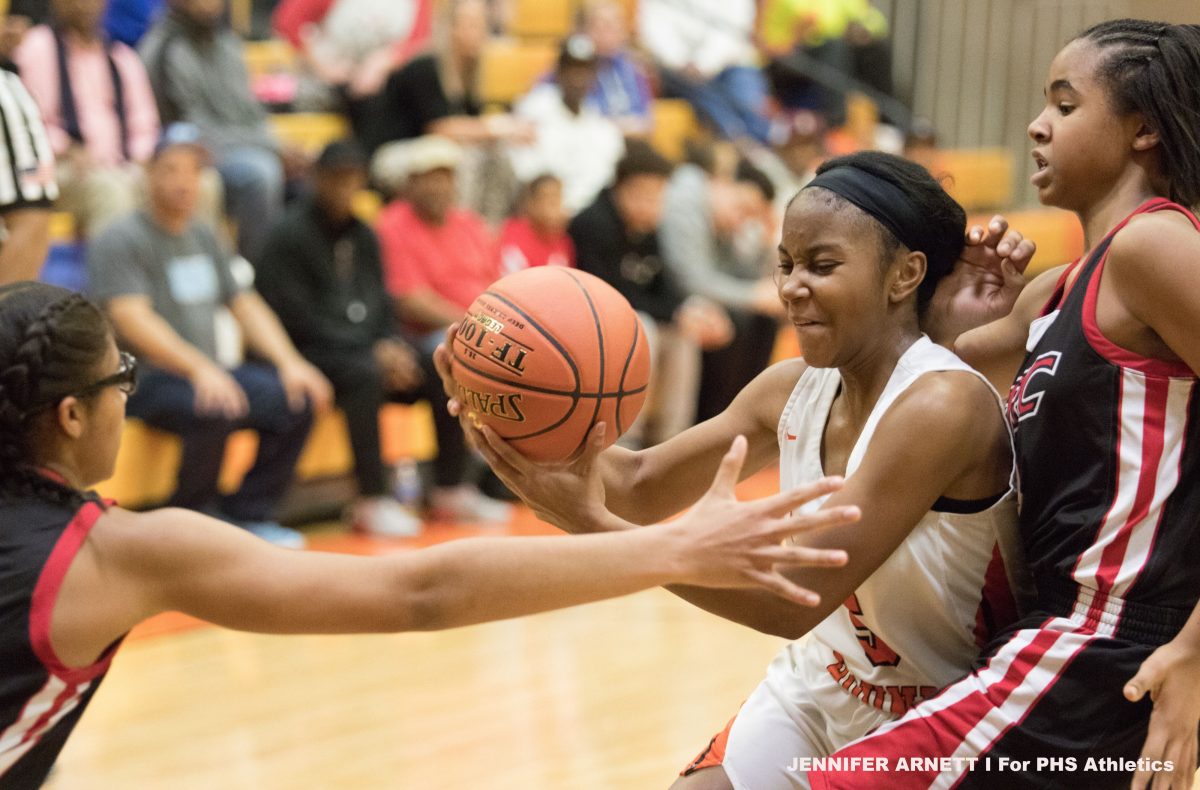 HOLDING ON – Ladyhound sophomore guard Asja-li Garrard tried her best to maintain possession of the basketball while getting pressured by GRC’s freshman Brianna Byars and seventh grader Ciara Byars.

It’s Been 12 Years Since The Ladyhounds

PARIS, KY – In a game that went back and forth for the entire 32 minutes, the Paris Ladyhounds used a late fourth quarter run that held up at the end, giving Coach Aaron Speaks’ team their first victory over George Rogers Clark in 12 years, as they snapped a 28-game losing streak to the Lady Cardinals. The last time Paris beat GRC on the basketball court, it came back on January 11, 2008 when the majority of this year’s players weren’t even enrolled in school. 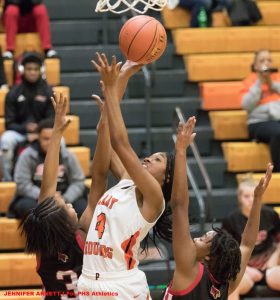 Clark, despite missing their top player in Northern Kentucky University commit Kennedy Igo, who was resting her ankle, still had enough firepower on the floor to fight back against the Ladyhounds, who were just trying to hold on.

A quick lay-up from senior Shelbi Wilson, followed by a long jumper by seventh grader Ciara Byars, saw the Cardinals close the gap to 42-41 after sophomore Tyra Flowers hit 1 of her 2 free throw attempts.

Clark, following a timeout, had the ball in their possession with 10 seconds remaining. A charge call on GRC’s Flowers gave the ball back to Paris. With 4.9 seconds showing on the clock, the Ladyhounds had a chance to ice it but Tye, Paris’ best free throw shooter, missed both of her attempts, leaving Coach Robbie Graham’s team with a chance to steal it at the end.

Wilson, racing down the floor after the missed free throws by Tye, launched a last second desperation shot just inside the three-point line that would bounce hard off the backboard and in doing so, it sent Paris’ bench and fans into a frenzy as they celebrated the huge win over the 3-time defending 10th region champions. 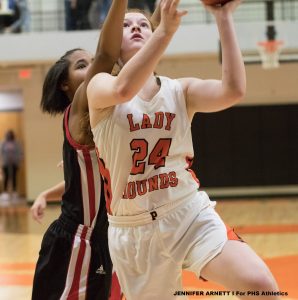 “I’m extremely proud of how hard we played tonight. Obviously this is a huge win for our basketball program. But it’s also a huge confidence booster for us,” said Coach Speaks afterwards in a very excited Ladyhound locker-room. “When you lose to a team 28 straight times, it makes it hard to get your team to buy in and believe that they can win a game against a team of this caliber. Our team bought in and believed tonight. I’m very proud of them.”

Paris improved to 13-1 overall and 2-1 in district play as they prepare for the upcoming All “A” 10th Region Tournament that will get underway tonight at Robertson County. The Ladyhounds will play Augusta tomorrow evening.

GRC grabbed the early 3-0 lead but Paris responded in a big way to close the quarter on a 16-6 run that gave them the lead after one at 16-9. Three made three-point baskets one each by Sanaa Jackson, Zoe Strings and Asja-li Garrard, highlighted the Ladyhound run.

Paris moved out to their biggest lead of the evening when Tye nailed a three 32 seconds into the second period to give her team a 19-11 advantage.

Clark, who came into the contest ranked No.2 in the inaugural 10th Region Media Poll, but No.1 in the Coaches Poll, decided it was time to wake up.

A baseline three from Brianna Byars jumpstarted the Cards on a 13-2 run that saw the freshman score 9 of her team’s 13 points in a span of three minutes as GRC moved in front 24-21. 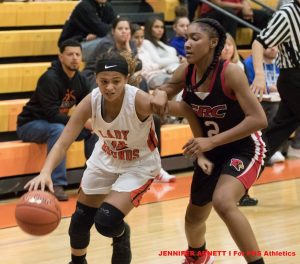 TRYING TO GET FREE – Paris’ freshman Chloe Kemper, using her off-arm, tried to get some separation between her and George Rogers Clark defender Trinity Gay while making her way to the basket.

A pullup jumper by Strings made it 24-23. Wilson’s free throw at the end made it 25-23 Cardinals at the break.

Clark opened the third frame with three quick points to push the margin to five at 28-23 as their run expanded to 17-4 over two quarters.

Normally, in the past, this would be the time Paris would just throw in the towel and succumb to the Cardinals. But not on this night.

Behind the play of freshman Jamie Cowan, the Ladyhounds answered Clark’s run with a huge run of their own that saw them erase the five point deficit by turning it into a five point lead at 35-30. Cowan scored six points during her team’s 12-2 run. Speaks’ team would go on to lead 36-32 heading into the final eight minutes.

Strings’ three point play helped Paris maintain their four point advantage at 39-35 with 3:32 showing on the clock. A free throw by Wilson made it 39-36. Chloe Kemper’s free throw and Tye’s lay-up pushed Paris’ lead out to 42-36, setting up the final minutes of the game.

Strings paced the Ladyhounds with 12 points, 8 rebounds, 5 blocks, 4 steals and 3

assists. Cowan totaled 10 points and 5 rebounds, while Jackson scored 7 points and grabbed 8 rebounds. Tye finished with 7 points and Garrard’s line saw her with 5 points, 4 rebounds and 5 assists. Chloe Kemper came off the bench to add one point and 3 rebounds.

Bri Byars led GRC with 14. Wilson had 10 and Flowers scored 8. Rounding out their scoring were Ciara Byars with 5 and Trinity Gay 4. 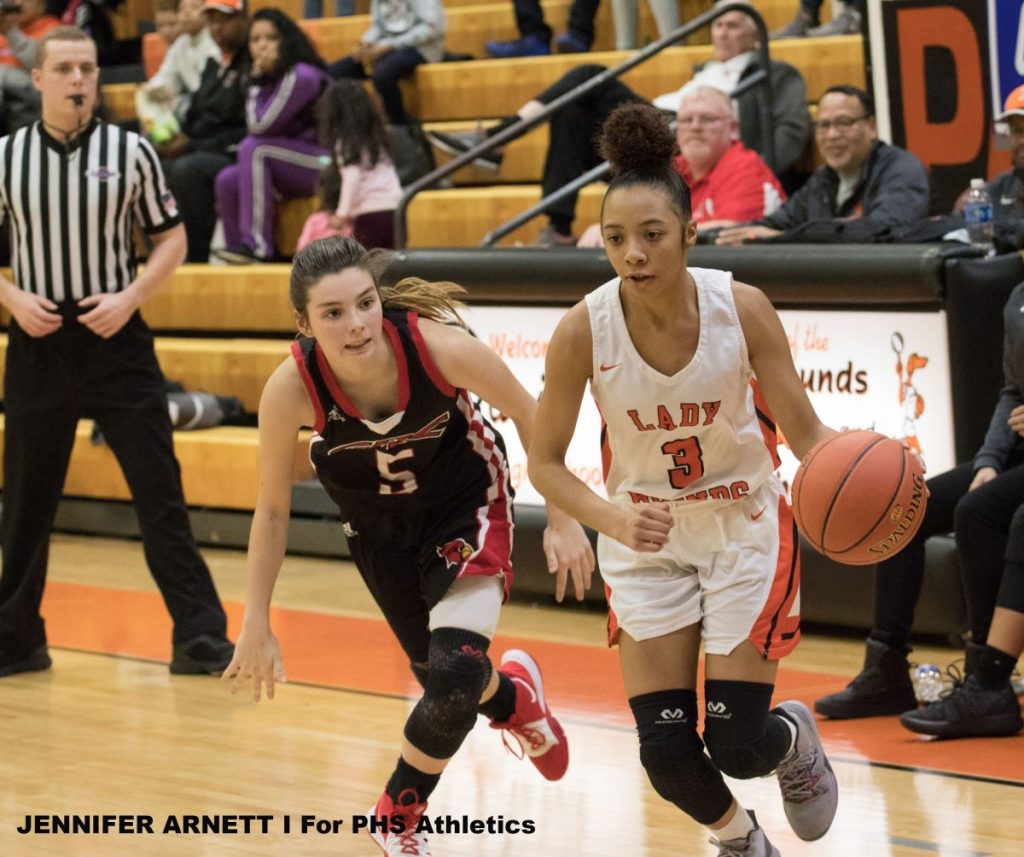 TYE HEADING TO THE RACK – After getting past the defensive pressure of Clark’s Erica Berry, Ladyhound junior guard Chez Tye made her way to the basket for a lay-up that gave Paris a 42-36 lead.