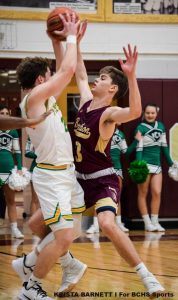 PLAYING THAT TOUGH DEFENSE – Bourbon County Colonel junior Jack Huckabay applied the defensive pressure on Rowan County senior Devin Davidson, which made it tough for him to find an open teammate. 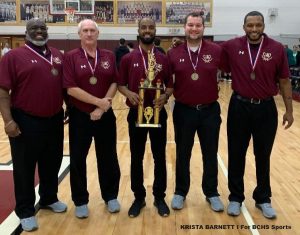 At 7:00 (CST) Inside The Sportscenter

PARIS – It wasn’t pretty by no means but when it comes to winning a championship, it doesn’t matter if it’s pretty or not, because all that really matters is that you win the game. Last week, in front of a charged up crowd inside Russ Day Gym, Coach Lamont Campbell’s Bourbon County Colonels held off a scrappy Rowan County Vikings team to capture the 2020 Kentucky 2A Championship Section 5 Title for the second year in a row. Bourbon (15-2) knocked off their 16th region counterpart 57-53.

With the win, Bourbon will now have a shot at winning a state 2A title when they arrive in Owensboro, Kentucky today. The Colonels will face Section 8 Champion Lawrence County (10-6), who defeated Magoffin County 86-79, at 7:00 (CST) this evening inside the Sportscenter.

When asked about their state opponent Lawrence County, Coach Campbell said that they are your typical Eastern KY Mountain team. “They will be physical and play hard and run their stuff well. They like open sets with dribble drive motion. They aren’t very big or deep but they hang their hats on their top six players.” The Bulldogs are led by senior Tyler Maynard (21ppg), sophomore 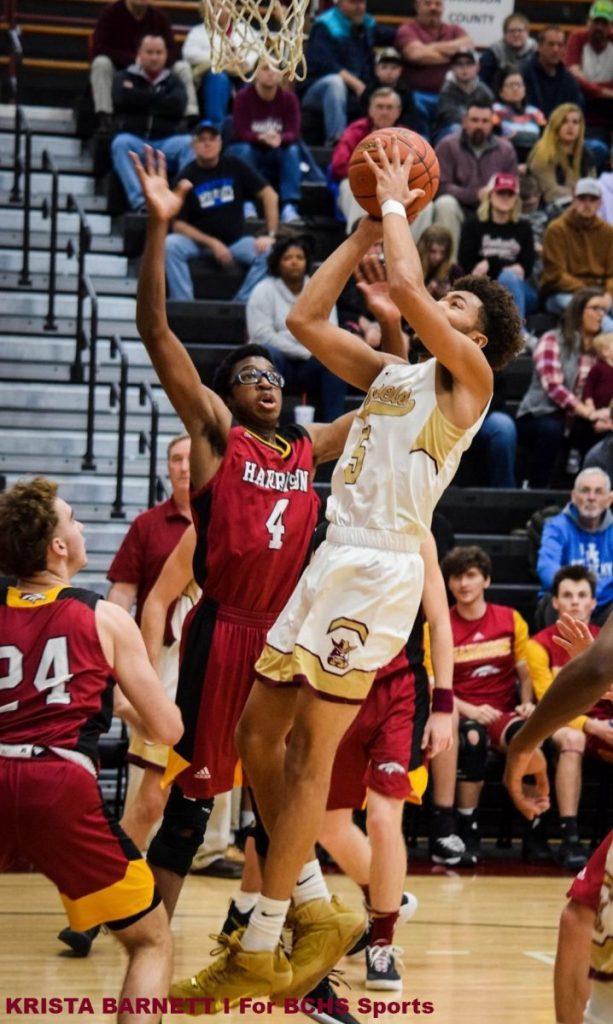 “We expect to continue to be who we are. We want to get after them and make them uncomfortable,” said Campbell. “We want to take things away that they are comfortable with doing as we have done to all of our opponents all year. I think our speed and athleticism is something they haven’t seen yet so, we will continue to be who we are even in this atmosphere of games.”

The winner of the Bourbon/Lawrence matchup will face the winner of Section 6 Champion Lexington Catholic and Section 2 Champion Calloway County on Saturday at 3:00 (CST). The boys’ Kentucky 2A State Championship game will be held on Sunday at 3:00 (CST). All games will be played inside the Owensboro Sportscenter, a historic arena that’s the home of the Kentucky Wesleyan College Panthers and the Owensboro Catholic High School Aces.

Mason Moore led Rowan with a game-high 27 that included 4 three-point goals. Moore was followed by Chase Aiderman with 17.

Coach Campbell had this to say in a text message after his team’s narrow hard fought victory over a Vikings team that wouldn’t go away. 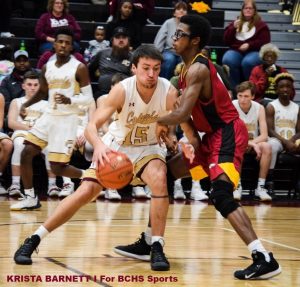 LOOKING TO GET BY HIS OPPONENT – Colonel junior forward Parker Estes tries to make his move around the Harrison County defender during his team’s 89-49 victory over the Thorobreds. Estes finished his night with 14 points.

“I think overall, we will continue to grow and win games against different opponents and different styles. Rowan is well coached and disciplined. They did things to us to make us adjust. I’m proud of our guys for sticking with the fight and pulling it out. Now we get ready for Owensboro.”

Adding to that, the Coach went on to say that it was a good win for his team and that it feels good to be a part of history again. “Last season we won and became the first ever Section 5 2A Section Champions and now to be the first ever back to back Section 5 champions is huge for our guys and it’s great for our community and our school.”

Bourbon advanced to the Section 5 title game by blowing away rival Harrison County (2-12) in the semifinal round 89-49.

The Colonels led 22-18 after the first quarter and extended their margin to 43-29 at the break, as the junior Huckabay led the Colonels during the first half with 13 points that saw him hit 4 three-point goals.

Campbell’s team took total control of the game in the third frame when they outscored the Thorobreds 25-6 to move their lead out to 68-25 heading into the final eight minutes, as 9 different Colonels scored during the period.

The fourth quarter was nearly a splitting image of the third as Bourbon outscored their 10th Region foe 24-14 to cruise home with the 40 point win. The 89 points scored was also a season high. 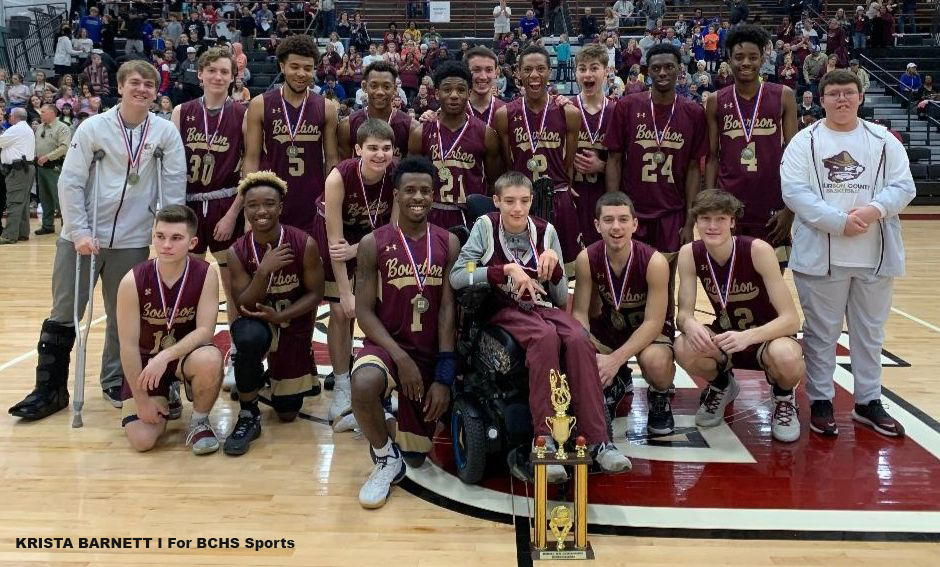 KENTUCKY SECTION 5 CHAMPIONS – The Bourbon County Colonels celebrated after winning the Kentucky 2A Section Championship when they defeated Rowan County 57-53 on Saturday evening inside Russ Day Gym. Bourbon opened the tournament by knocking off Harrison County in the semifinal round. They will now play Lawrence County tonight in the opening round of the 2020 Kentucky 2A Championship in Owensboro.