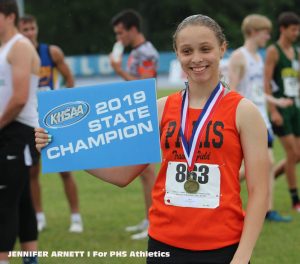 DEFENDING STATE CHAMP RETURNS – Taesha #sweetfeet Speaks will start this season out as the defending state champion in Class A in the indoor 60m, as well as the outdoor 100 and 200 meter dash. She’ll face a tough field Saturday at the Wildcat Classic that will take place inside the University of Kentucky’s Nutter Fieldhouse.

Paris’ Taesha Speaks Was A

PARIS – It’s been a long time since someone from this area can say they had the season that Taesha Speaks had for the Paris Ladyhound Track Team as a freshman.

Last season’s accolades included outdoor KHSAA State Titles in the 100 and 200 meter dash, as well as the indoor state 55 meter dash title. She was a state indoor runner-up (400m dash) and a two-time state outdoor semifinalist after anchoring the Paris 4×100 and 4×200 relay teams that won region titles, to a fourth place finish at the Class A State. She became the first Paris athlete to win two state titles in a single state meet in 33 years, and she currently holds school-records in six individual events. Taesha was also part of four region titles and helped her Ladyhound track team bring home their first region track trophy in 37 years.

Yes, it was a very good year for Taesha Speaks but now, unlike a year ago when she flew under the radar – not anymore, because people will be gunning for her, just like she was gunning for them that saw her defeat the defending state champion in the 100m dash at the Class A meet.

When asked, does she feel any extra pressure being the reigning champion, Speaks had this to say. 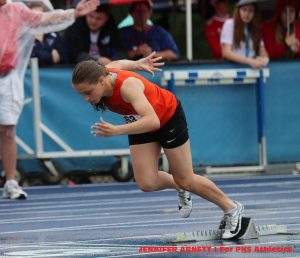 NEW MEET RECORD – During her first competition of the 2020 season, Ladyhound sophomore Taesha Speaks broke the meet record at the University of Findlay Dave’s Running High School Series in the 200 meter dash. The previous record time of 25.81 was set by Jessica Jones of the Maximum Ouput Track Club (Detroit, MI) back in 2002. Taesha, who is pictured here taking off in the 200 meter dash at last season’s KHSAA State Meet, ran a 25.57, blowing away the field by nearly an entire second.

“There is definitely a lot of pressure because the bar is set pretty high from last year. Everyone has their own expectations. Winning state as a freshman and running fairly good times near the end of the season and throughout the summer, adds pressure because after you do something one time, your expected to do it again. I constantly have people coming up to me talking about how they feel the season will go, or how they are expecting a lot out of me and my team for this season. I’m young and still have so much to learn, so it definitely adds pressure.”

Now that everybody will be watching, Speaks knows that she doesn’t want to be that person that doesn’t live up to their high expectations. With that being said, she’s even more driven now by working out harder during the off-season, which got her here in the first place.

“I’ve been training since August. I’ve done a lot of work with my form, coming out of the blocks, and my endurance because I have goals for the indoor and outdoor season.”

For indoor, she said that one of her main goals is to qualify for the New Balance Nationals in New York, and to also run a personal best in the 60 and 55 meter dash. As far as outdoor, she would like to break 25 in the 200, PR in the 100, and place high in relays and individual events at state with her teammates.

Well, she’s accomplished one of her goals already after running a personal best and new school-record 7.82 to win the 60m dash at the University of Findlay Dave’s Running High School Series that took place Sunday inside the Malcolm Athletic Complex in Findlay, Ohio to jumpstart her 2020 season. She also won the 200m dash in a new school-record time of 25.57, besting her best time of 26.33. Both times are currently ranked No.1 in Kentucky regardless of class and her 200 time broke the meet record that had stood for 18 years.

Realizing she’s a household name around the state, how is #sweetfeet, who carries a 4.0 plus GPA, handling the newly found notoriety?

“God says “Humble yourself before the Lord, and he will lift you up.” I try to apply these things to my life because without God, none of this would be possible. I know that there are always other people out there working just as hard. Running in middle school and last year nobody expected me to be beating some of the older girls that I was beating, and I know they have the same mindset as I did.”

But that’s how Taesha has been throughout her young career … humble. No crazy celebrations after a huge win like some may do. No talking down an opponent. No stare downs. No nothing. She just goes about her business and win. Sometimes you may get a smile but the majority of the time, you get a person that loves what she’s doing and doesn’t take anything for granted and gives nothing but her absolute best!

And when it comes to giving thanks, her answer shouldn’t surprise anyone.

“As I said previously, I would like to thank God because without him, none of this would be possible. He’s provided me with a great support system, coaches, and family and I am so grateful for that.”

And everyone is grateful for you Taesha “Sweetfeet” Speaks because there’s an entire community behind you. Keep running fast!

The field house will open at 10:30 am on Saturday. The competition will begin at 12:00n (eastern time), and a “rolling time schedule” will be followed throughout the meet. Doors open at 11:00 am for spectators. The indoor track is located at the Nutter Field House, 1401 Sports Center Drive, on the campus of the University of Kentucky. 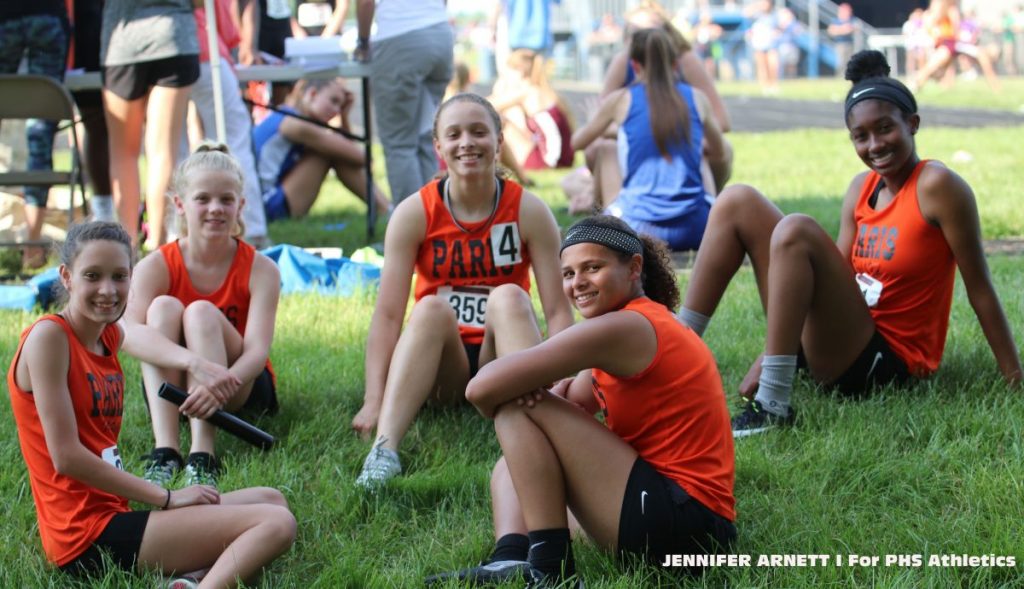 CHILLIN’ WITH HER TEAMMATES – During a break in action during last season’s Region 5 Meet that was held at Lexington Christian Academy, Taesha Speaks and a few of her teammates had a “chill session” just before their next event. Speaks said that she would love to see her relay teams win state titles this year. Pictured in the photo from left to right are Amiyah Speaks, Briley Cline, Taesha Speaks, Chloe Kemper and Zoe Strings.