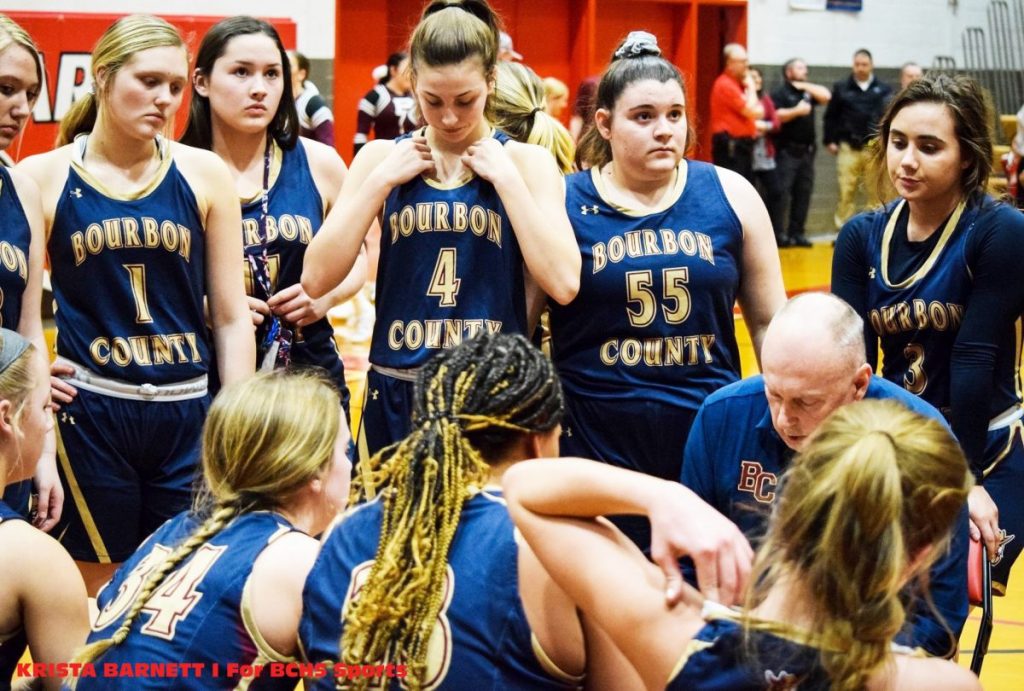 BACK ON TRACK – Lady Colonel Head Coach Bill Watson talked with his team during a recent game earlier this season. After losing 6 of 7, Bourbon has now won 3 in a row heading into their game with Bracken County on Friday night. If Watson’s team can beat GRC and Paris next week, they will share the top seed in the district with GRC.

The Four Combined For 53 Of

Bourbon (13-9, 3-1), who had lost 6 out of 7 games prior to their current win streak, assured themselves of no worse than a third place finish in the district, with an outside chance of getting the top seed with a win over GRC and Paris next week, where a coin toss would decide the top seed team for the upcoming 40th district tournament.

“We persevered through some foul trouble,” said Lady Colonel Coach Bill Watson in a text message. “But anytime you get four players in double figures that’s a good sign of our balance.”

Junior forward Savannah Parker paced the Lady Indians with a game-high 19 points and 4 rebounds. Freshman Shae Harris totaled 11 points, while eighth grader Reaghan Oney had 9. Hayden Barrier, also an eighth grader, scored 6 points but she did pull down a team-high 9 rebounds. Other scoring saw Allie Dillon with 2 points and 1 point each came from Ella Routt and Emily Williams.

According to Coach Watson, Shorty and Jaycee (Goodwin) teamed up to do an outstanding job defensively on Barrier, holding the 10th Region’s second leading scorer to 6 points.

The loss snapped Montgomery County’s three-game win streak but more importantly, it left Coach Dustin High’s very young team with the fourth seed in the district as their record dropped to 9-12 overall and 0-5 in district play.

Bourbon held a 12-10 lead after the opening quarter and extended their margin to 22-11 on a Hamelback three. Montgomery, behind the scoring of Parker and an old fashion three from Barrier, closed the gap to five by the end of the half at 28-23.

Both teams stayed even throughout the third frame before the Lady Colonels opened the gap over the final eight minutes.

Down by as much as 11, MC closed the gap to five at 50-45 on a three from Barrier but only to see Johnson nail a huge three for the Lady Colonels to push their margin back out to eight. From there, Coach Watson’s team cruised home for the 10-point win.

The Lady Colonels will be back at home Friday night when they take on the Lady Polar Bears of Bracken County (3-18) and will stay at home on Saturday evening to play host to Fleming County (10-11). They will entertain George Rogers Clark (12-8, 4-1) on Tuesday night and end next week with a short road trip over to cross-town rival Paris (18-3, 2-2) next Saturday.