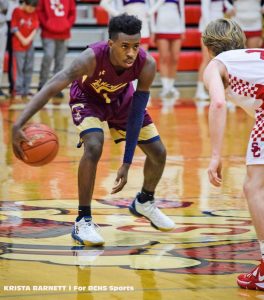 JUST GIVE ME A SECOND – Colonel senior guard Nakyir “Scrap” Joyce took a moment just before he would make his move on the Scott County defender during his team’s 88-79 victory over the host Cardinals Tuesday night. Scrap scored 13 points on the evening. 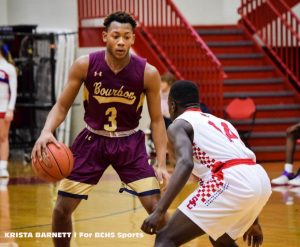 THEY CAN’T CHECK ME – While staring down Scott County’s senior Silas Emongo, Colonel senior Amirion “AJ” Joyce prepares to make his way around the Cardinal defender as he sliced and diced his way around Scott County all evening long in scoring a game-high 32 points.

Rematch With GRC Will Be Tuesday Night,

With District Top Seed On The Line

GEORGETOWN, KY – After missing back-to-back games because of an ejection during the closing minutes of the 2A State Championship game, Colonel leading scorer Amirion “AJ” Joyce returned to the court Tuesday night and greeted host Scott County (9-12) by pumping in a game-high 32 points in leading his team to a nice win over the perennial power 88-79. 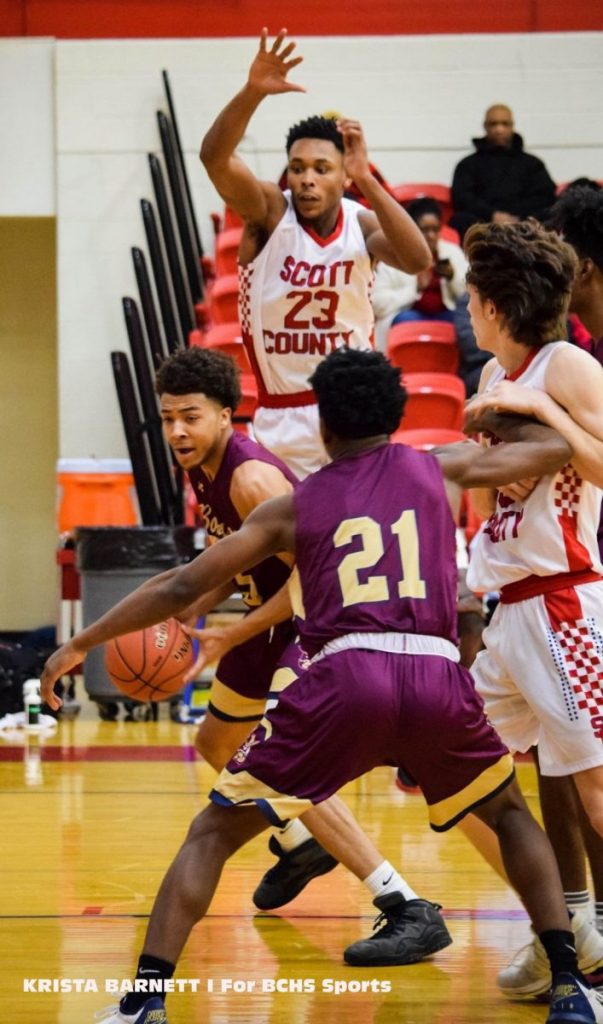 I’M GETTING TO THE RACK – Colonel senior Nathan Mack, while getting some help from fellow senior Nakwan “Bone’ Joyce, who was holding off a Scott County player, was determined to get off this shot attempt just in front of the Cardinals’ Jeremy Hamilton. Mack finished with 12 points and 7 rebounds.

“It was good to get AJ back. You know the bench has a weird way of making players better,” said Coach

Lamont Campbell over a text message. “Sitting out allowed him to look at the game with a different perspective. He really played well yesterday and not even attempting a 3. I’ve tried to stress to him all year that scorers have to get to the free throw line and he did that tonight. He will continue to get better as the season winds down.”

Bourbon, down 12-2 early to Scott County, tied the game at 12-all before emerging in front at 18-17 after one. The teams went back and forth over the second eight minutes before the Colonels, after five lead changes, held on to their one point advantage at 34-33 to go into the halftime break.

Senior forward Brycen Collins came alive for BC in the third frame scoring 10 of his 14 points that included two treys and a dunk, with one of those threes coming at a crucial time that slowed down the Cardinals momentum.

The fourth quarter saw both teams go to battle but it would be the Colonels standing tall at the end thanks to AJ Joyce and Nathan Mack, who capped off a nice Bourbon run with a dunk. Campbell’s team closed the game by knocking down free throws to pull away with the 9-point win. They finished the night hitting 27 of their 33 attempts from the charity stripe.

“This was another good battle to use to prepare for the post season,” Campbell said. “We’ve played a few 11th region teams this season and have gone 7-1 against them. Those are always good measuring sticks. I also thought we really played well playing with a good pace. We scored 88 points with (4) guys scoring double figures. That’s a positive no matter who the opponent is.”

The Colonels played their first game without AJ Joyce when they played host to the Patriots of Richmond Model (5-14) last Thursday evening. Unlike the GRC contest, Bourbon wouldn’t need their leading scorer on this evening as they rolled to the easy 24 point victory. Behind Brycen Collins’ 20 points and 5 rebounds, the Colonels blew past the Patriots 80-56.

The Bourbon County Colonels, freshly off their runner-up finish at the 2A State Championship in Owensboro, returned to the court last week and suffered their second consecutive loss when district foe George Rogers Clark (17-5, 4-0) knocked them off 77-65 that saw them pull away from Bourbon in the final quarter. The Colonels would, however, play the game without the services of Amirion “AJ” Joyce, who was serving a two-game suspension after being ejected late from the 2A title game against John Hardin. 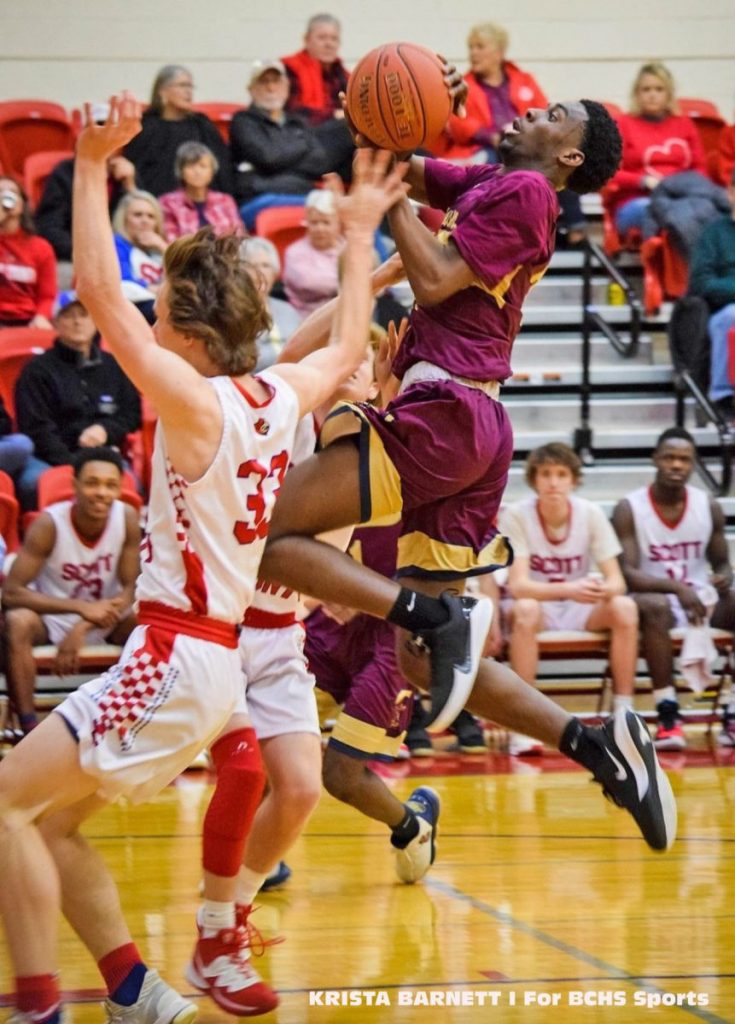 IN CONTROL OF THE SITUATION – While doing a juggling act in midflight, Colonel senior Mukonkole “Koko” Lukonga, somehow, put up this shot attempt despite the presence of two Scott County players for two of his 8 points on the evening.

With the victory over the Colonels, GRC, although voters knew that Joyce didn’t play, felt that the Cardinals were still better than Coach Lamont Campbell’s squad and moved the team from Winchester to the No.1 position in the 10th Region with Bourbon following a close second.

“I kept Bourbon as the No.1 team on my ballot,” said the Sports Doctor. “When AJ’s on the floor, he makes a huge difference.”

Senior guard Nakyir “Scrap” Joyce paced the Colonels with a career-best 28 points that saw him hit 10 of his 18 field goal attempts, as well as a 7 of 9 performance from the free throw line. Brycen Collins, who went 3 of 4 from behind the three-point line, followed with 14 points and 6 rebounds, while fellow senior Nakwan “Bone’ Joyce tossed in 10 points. Other scoring came from Nathan Mack with 4, Jack Huckabay 3, and 2 points each from Parker Estes, Amari Faulkner and Koko Lukonga.

Bourbon was scheduled to play Pikeville tonight but the Panthers canceled the game because of illness to their team. Campbell’s team will be back in action on Tuesday night for their rubber match against George Rogers Clark inside Russ Day Gym. A win by GRC will give them the top seed in the upcoming 40th District Tournament, however if the Colonels win and then knock off Paris (7-11) on Saturday (February 8th), they’ll tie GRC for the top spot and a coin toss at the district meeting will determine the top seed. Sandwiched in between the GRC and Paris game will be a trip to Campbell County (10-12) on Thursday night, February 6th.