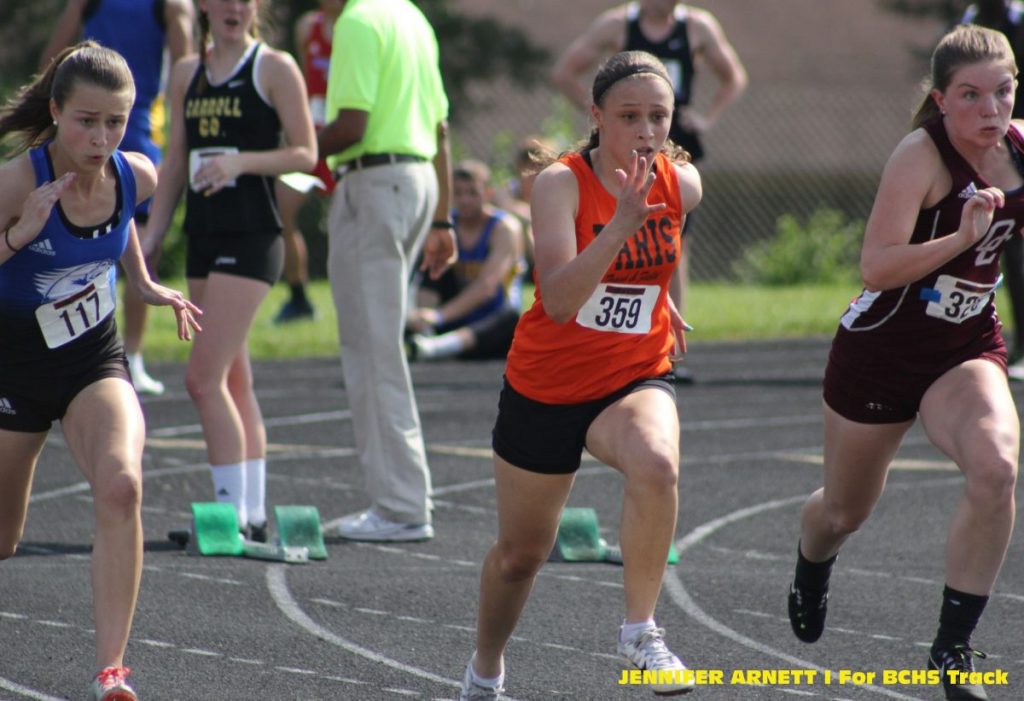 #SWEETFEET IS GETTING CLOSE – After sprinting to a time of 25.19, Tashea Speaks, shown here at last season’s outdoor Region 5 meet, just missed qualifying to the New Balance Nationals Indoor Meet in the 200m dash. Qualifying standard time is 25.14 and Taesha had a 25.19. She’d have a few more races to see if she can lower her time to make it to New York, in the 200 and 60 meter dash.

During The One Mile Run

LEXINGTON, KY – The 2020 Indoor Track And Field season has officially started for our local athletes at Paris and Bourbon County, and after a few dynamic showings at the 2020 prestigious Wildcat Classic, it should be a great indoor season for some that could lead them on a path to winning a KTCCCA Indoor State Title in their event come March.

After a sensational showing at the University of Findlay’s Dave’s Running Series in Ohio, Speaks followed that up with a brilliant performance at the Wildcat Classic that saw her not only keep her respect in Class 1A, but finally earned the respect as one of the top sprinters in the state, regardless of class following her showing inside a packed Nutter Fieldhouse on the campus of the University of Kentucky last Saturday.

Speaks started her day by placing third in the 60m dash in a time of 7.87, which was just off her season best of 7.82. Male super sophomore Veronique Ninamou won the event in a state leading time of 7.75, with Sacred Heart senior star Iaunia Pointer placing second in a time of 7.87.

In the 200m dash, Speaks, after trailing the state top two sprinters for the majority of the race, caught and then passed Ninamou down the stretch to place second in the event. In doing so, she beat the Louisville Male sprinter for the first time ever during their battles over the past three years. Pointer edged Speaks at the finish line, winning in a state leading time of 25.09. Speaks ran her personal best time of 25.19. Ninamou, who placed third, ran a 25.44.

“Isn’t she amazing,” said Ladyhound Coach Brian Washington, after Taesha’s performance. “I don’t think she realizes what she’s doing. She’s one of the top sprinters in the state and she will only get faster when it’s all said and done.” 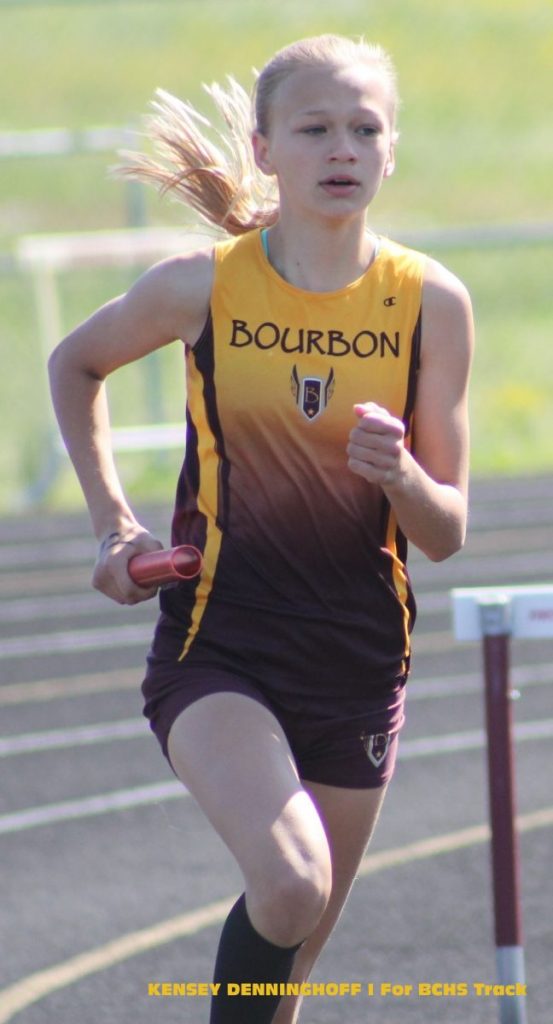 LOOKING FOR A SHOT AT THE NATIONALS – Bethany Simpson, shown her during an outdoor meet last season, is currently in the running for making a trip to the New Balance Nationals Indoor Meet that will be held inside the new balance track and field center at the armory in NYC in March.

Another outstanding performance came from Bourbon County Lady Colonel eighth grader Bethany Simpson, who stunned the field after placing second in the one mile run. Simpson lost to Louisville duPont Manual freshman star Jessica Secor, who ran a sensational time of 5:13.09. Simpson, competing against 88 other runners, was only one of two middle schoolers to place in the top 10. Her time of 5:22.31 is currently ranked fourth in the state and No.1 for middle school runners. It also broke the school indoor record. Not bad for someone who doubles her time with the girls basketball team at Bourbon County during the winter.

“We didn’t start practicing for indoors until two weeks ago,” said Colonel Coach Matt Perraut. “I brought my team here just to see where they stood with their times and Bethany puts up a great time. I believe she’s an amazingly talented athlete all the way around. We could put her in almost every event and she would do well, but this mile time is spectacular. I can see her possibly sub going 5:10 this year!”

Simpson said that the race felt really good. “It didn’t feel like I was going that fast.” Her Mom Shelly added, “I know she was really excited and looking forward to when she’s in real track shape to see what she can do! Beating Drew’s (Perraut) time (5:09) is now on her radar!”

The next best placer on the day saw Lady Colonel junior runner Ximena Tamariz place 5th in the two mile run. Her time of 12:22.56 is now ranked as the 7th best time in the entire state, which includes all classes.

Colonel seventh grader Jesus Mendoza-solis placed 7th out of 151 participants in the one mile run. He would be the only middle school runner to place in the top 120.

Paris Ladyhound sophomore Riah Oliver, throwing for the first time this season, finished seventh in the shot put that saw her go up against 70 throwers. Her toss of 29-09 was the best throw out of small school participants and the best throw for the sophomore class.

Other Highlights On The Day

Lady Colonel Sophomore Tori Young, freshly off an injury she suffered during XC season, placed 37th overall in the 400m dash, running a time of 1:06.20.

Paris freshman jumper Katy Chumbley had a great day during the long jump competition by finishing in 17th place out of 72 jumpers. She was the second best small school jumper, as well as having the second best jump for a freshman on the day with a leap of 14-0.25 feet. 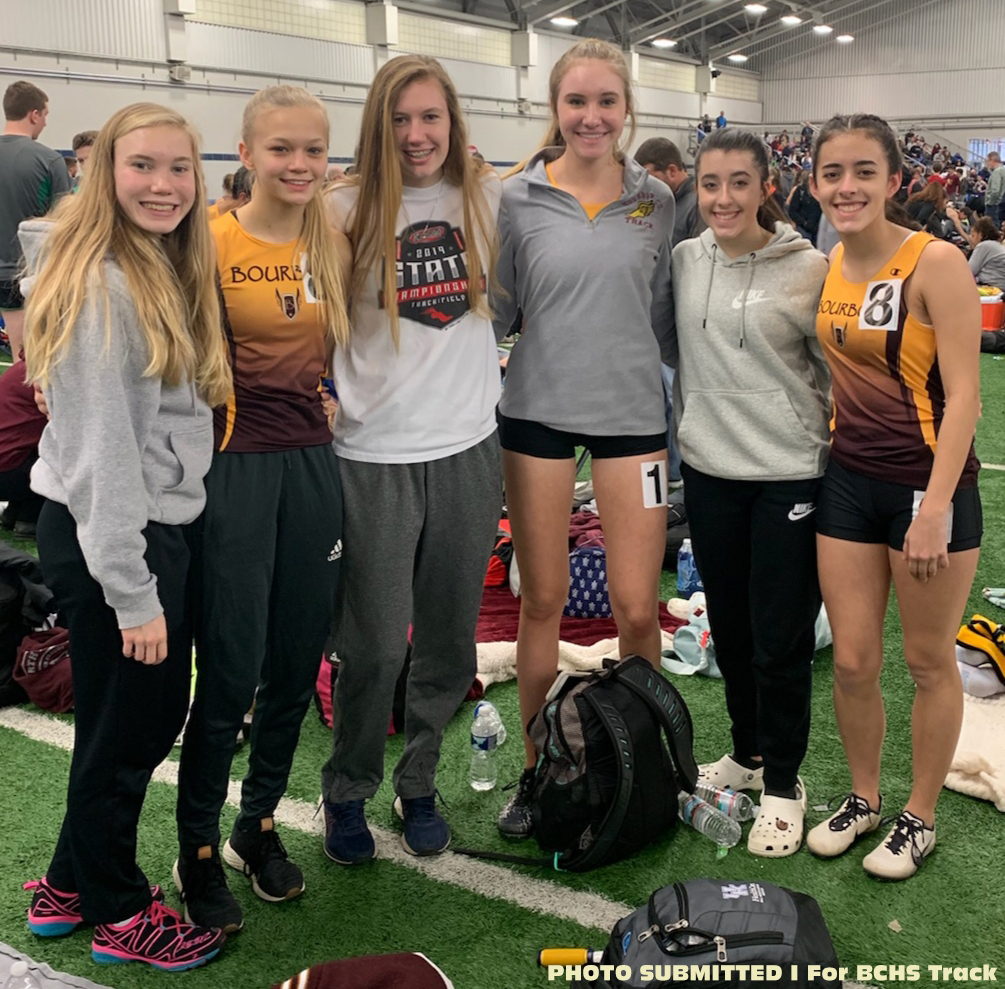 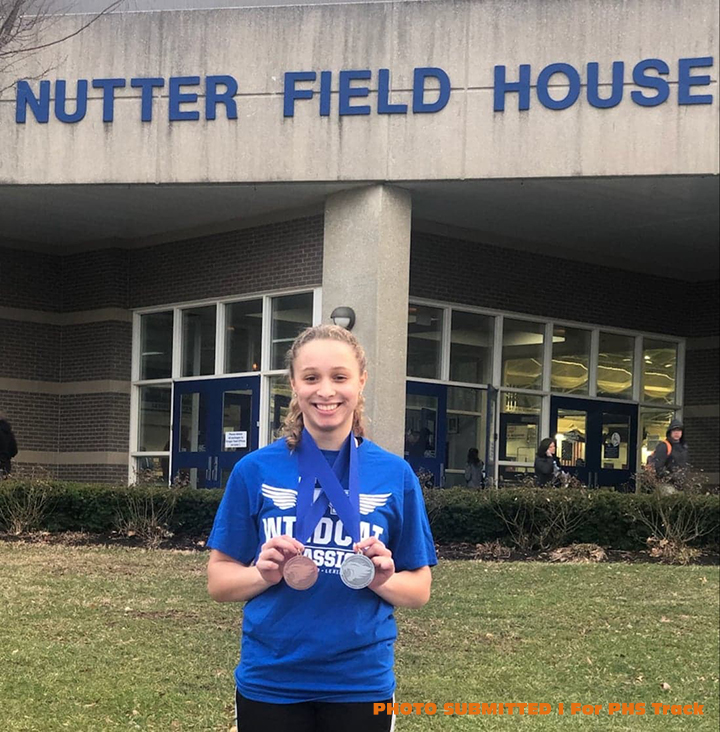 SPEAKS DIDN’T DISAPPOINT – Sprinting against an elite field, Paris sophomore Taesha Speaks placed second in the 200m dash and third in the 60m dash to bring home two medals at the Wildcat Classic that was held last weekend at UK’S Nutter Field House.