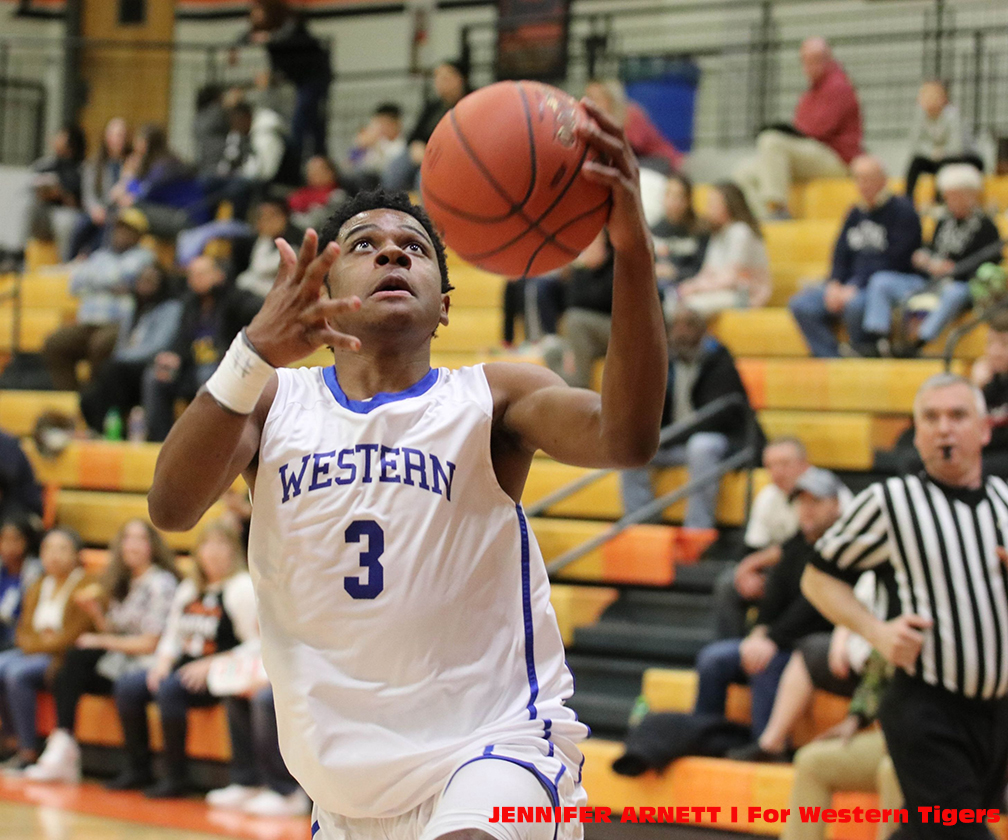 CLARK LED THE WAY – Western Tigers’ Jamaun Clark went up for this uncontested lay-up for two of his game-high 23 points to lead the Tigers to their first victory in over 50 years. Clark filled out his stat sheet with 6 steals, 5 rebounds and 3 assists.

With 23 Points And 6 Steals

PARIS, KY – For one night only, the Paris Greyhounds went back in time.

With the school paying tribute to the former all black school that was located just blocks away from Paris High School, Coach Terence Brooks’ Western Tigers escaped with a tough 58-52 victory over Coach Sam Elsbernd’s Pendleton County Wildcats’ team that just wouldn’t go away.

With a lot of the Paris Western alum in the stands watching, the Tigers, behind the play of senior guard Jamaun Clark, raced out to a quick 17-8 first quarter lead. Clark scored 11 of Western’s 17 points in the frame. The other points came senior forwards Caleb Johnson and Matthew Barber, as well as senior forward Logan Moncado. His put back basket gave the Tigers their 9 point advantage. The basket by Moncada, who made his first official start, was his first made field goal of the season.

Pendleton stayed within striking distance with the Tigers thanks to the second quarter scoring of Clay Monroe. The senior guard scored 9 points during the period that included two made three-point goals. The latter coming when the Tigers, on a made baseline three by sophomore guard Cameron Lilly, pushed their lead to 31-20 with under a minute go. Monroe’s three made it 31-23 Tigers at the break.

The third quarter saw Pendleton overtake the Western Tigers 36-35, following back to back threes from Noah Barnard and Monroe, but the Tigers were still able to catch the Wildcats by the end of the quarter when Johnson answered with a driving lay-up and put back goal that closed the third with the score tied at 39-all.

After both teams traded baskets for baskets to start the first few minutes of the fourth frame, the Tigers, leading 46-44, picked up some breathing room at 51-44 behind the scoring of freshman guard Jakari Ransom, who did most of his damage at the free throw line following a technical foul on the Wildcats’ bench to end his personal 5-0 scoring run.

Instead of giving up, where they easily could’ve, Coach Elsbernd’s Wildcats made a final run at the Tigers that saw them close the gap back to two at 53-51. During their mini run, senior forward Brett Booth score 7 straight points.

From that point on, twice the Wildcats (11-18) had a chance to tie or take the lead but wide open looks at the basket by Monroe and Tredyn Thomas wouldn’t fall. 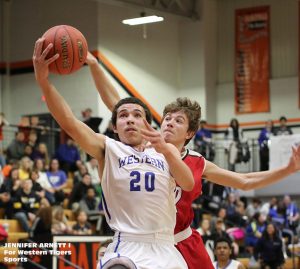 JOHNSON SOARING FOR TWO – After getting the steal, Tigers senior Caleb Johnson geos in for two points just in front of the Pendleton county defender. Johnson finished his night with 12 points and 4 rebounds. 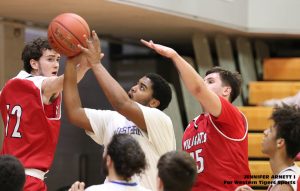 RANSOM FIGHTING THROUGH TRAFFIC – Freshman guard Jakari Ransom, despite the presences of several Pendleton County defenders, was very determined to get this shot attempt off while making his way to the basket during the final quarter. It was Ransom’s late fourth quarter spurt that gave the Tigers the cushioned they needed to pull out the win.

The Tigers held on at the end behind the free throw shooting of Clark and Lilly, as they closed the game on a 5-1 run to leave Redwine Gym with the 58-52 victory, giving the Western Tigers, the 1953 National Basketball Tournament Champions for Black High Schools, their first victory since the 1960’s.

Clark paced the Tigers with a game-high 23 points. He also added 6 steals, 5 rebounds and 3 assists. Johnson, before fouling out in the fourth quarter, finished with 12 points, 4 rebounds and 3 steals. Lilly and Ransom scored 7 points each and Barber had 5. Moncada score 2 points, while the Tigers’ leading scorer Ricqiece Washington, who was still battling a sickness, totaled 2 points.

The Paris Greyhounds (10-17) will conclude their regular season tonight when they make their third trip to the state capitol this season to face Western Hills, who are coached by former Greyhound Coach Geoff Cody. Paris previous two trips to Frankfort saw them lose to Franklin County and Frankfort.

The Hounds will start post season play Tuesday night when they tangle with host George Rogers Clark in the semifinal round of the 40th District Tournament in Winchester.