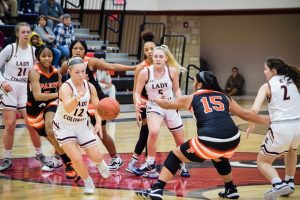 FIGHT TO THE FINISH – Bourbon County sophomore Jaydyn “Shorty” Goodwin was the first to get to this loose ball just in front of Paris’ Jazmin Jackson during the Lady Colonels’ 39-35 district tournament win over the Ladyhounds on Monday night in Winchester. Others coming in for some action are Paris’ Asja-li Garrard, Sanaa Jackson and Chez Tye, along with Bourbon’s McLain Murphy, Makenzie Kincade and Bella Mitchell.      PHOTO BY KRISTA BARNETT

McLain Murphy Was Balling Out And

Hannah Hamelback Was Being Hannah

WINCHESTER, KY – Monday night, inside the new George Rogers Clark Arena, Coach Aaron Speaks’ Paris Ladyhounds and Coach Bill Watson’s Bourbon County Lady Colonels went to battle for the third time this season in the one that counted the most. At stake was a trip to last night’s championship game of the Girls 2020 40th District Basketball Tournament and a bid to next week’s 10th Region Tournament that will be played in Campbell County starting on Monday.

After both teams helped GRC build a new edition onto their already beautiful new gym, the Lady Colonels made just enough shots to hold off a Paris team that couldn’t hit the side of the barn, nor the ocean as they struggled from the field all night long in dropping the district tournament game 39-35. It also marked the second time over the past three years that Bourbon has eliminated their rival from post season play after splitting their regular season matchups.

Speaks’ team made just 12 of their 67 shot attempts that included a 3 for 22 performance from behind the three-point line. Bourbon didn’t fare much better as Watson’s squad made only 14 of their 42 shot attempts and 1 of 10 from three-point range, while hitting only 10 of their 21 free throw attempts. Paris was 8 of 14 from the line.

“It just wasn’t our night offensively,” said a very disappointed Coach Speaks afterwards. “I thought we executed our defensive game plan very well, we just couldn’t put the ball in the basket on the offensive end and that was the difference in the game.” The Coach went on to say that he thought both teams played extremely hard but give Bourbon County credit, because “they took advantage of their opportunities when they had them and we didn’t.”

Coach Watson, who saw his Lady Colonels reach the district championship game for the fifth time in six years, said that it was a gut check win for his team. “Paris is really good and well coached. It will be many more battles like this in the next several years.” The Coach went on to praise the play of freshman center Jhaven Meade and junior guard McLain Murphy. “Jhaven was huge in the game defensively and I thought McLain was huge in the fourth without scoring.”

Meade finished her night with a triple double that saw her with 10 points, 11 rebounds, while blocking 10 Ladyhound shots as she made life miserable for their rival all night long inside the paint. Murphy tossed in a game-high 16 points, as well as recording 10 rebounds and 6 steals. Junior Hannah Hamelback, although in early foul trouble, bounced back to have a big night with 7 points and 10 rebounds. Other scoring saw Jaydyn “Shorty” Goodwin and Makenzie Kincade with 2 points each and eighth grader Caylie Baker had 1.

Despite the loss, the Ladyhounds still lead the overall series between the two rivals 78-35. 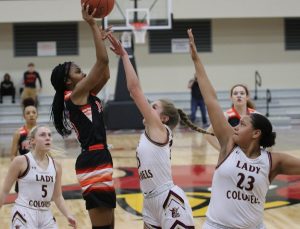 DRAWING A CROWD – Asja-li Garrard, the Ladyhound sophomore guard, got off this baseline jumper despite being surrounded by three Bourbon County defenders that included Makenzie Kincade (#5), Hannah Hamelback, who was applying the most pressure and Jhaven Meade (#23).        PHOTO BY JENNIFER ARNETT

The Lady Colonels jumped out to a quick 6-0 lead thanks to four made free throws and a put back bucket by Meade. Paris finally got on the scoreboard at the 2:00 mark on a Chez Tye layup and then closed the margin down to two at the end of the quarter on a basket from Nia Kenney. The Ladyhounds finished the opening frame making only 2 of their 21 shot attempts.

Bourbon extended their lead to five (13-8) early in the second quarter following an old fashion three point play and driving layup from Murphy. Paris, behind the play of freshman Jamie Cowan, answered with an 8-0 run to pull in front 14-13 with under a minute remaining in the half. Murphy’s runner at the buzzer gave Bourbon a 16-15 halftime lead.

The third quarter saw Murphy still leading her team as BOCO pushed their gap out to eight on two different occasions (24-16, 29-21) before Paris closed the period with consecutive baskets by Cowan that helped them get to within four at 29-25 heading into the final quarter.

Watson’s team upheld their lead throughout the fourth frame thanks to Meade, who was having her way in the paint over the smaller Ladyhounds. Meade’s six straight points helped her team increase their advantage to 35-27 at the 4:09 mark of the period.

Back to back threes from Sanaa Jackson and Cowan and a running layup by Tye, saw Paris tie the score at 35-all.

Following a Lady Colonel turnover, one of 28 on the evening for BC, Paris had the chance to take the lead but Murphy came up with a big steal of her own that led to a basket at their end of the floor when Hamelback followed up Murphy’s miss shot attempt that gave the Colonels a 37-35 lead with under 20 seconds remaining.

Paris had three chances from there to get even with their rival or win the game, but two miss shots and a turnover, one of 20 on the night, did them in, as Shorty Goodwin calmly nailed two free throws at the end to seal the deal for Bourbon.

Bourbon County (19-12) will face six-time defending champ George Rogers Clark (18-10), who blew away Montgomery County in their district opener 78-28, tonight in the 40th District Championship game. GRC won both regular season games by scores of 56-35 and 71-40. Game time is set for 7:00 in the new GRC Arena located in Winchester, Kentucky. 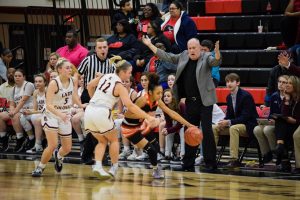 DON’T LET HER BY YOU – Lady Colonel Coach Bill Watson reacts after he saw his defenders Jaydyn “Shorty” Goodwin and Makenzie Kincade let Paris’ Chez Tye slip past them during fourth quarter action of Bourbon’s 39-35 victory over Paris in the opening round of the 40th District Tournament that started Monday night at George Rogers Clark.         PHOTO BY KRISTA BARNETT