HARDIN GOT IT DONE – Lady Colonel eighth grader Laiken Hardin, shown here pushing the ball down the court against Mason’s Macey Littleton, came off the bench to give her team a huge lift when she finished with 10 points and 8 rebounds, with most of her work coming during the crucial first half when Bourbon had trouble making shots.         WARREN TAYLOR I Bourbon Schools Media Relations

With A Trip To The Title Game On The Line

ALEXANDRIA, KY – With his top guns struggling to put the ball in the basket against Mason County, Coach Bill Watson’s Bourbon County Lady Colonels needed someone to step up and give them a lift, or it would be another early exit for the team that was making its fifth trip over the past six years to the 10th Region Tournament.

Although it was an unlikely hero, someone did step up for Bourbon.

Eighth grader Laiken Hardin gave the Lady Colonels the spark they needed in the first half that helped her team pull out a 42-35 victory over the Lady Royals. The victory would be the program’s first region tournament win since eliminating Pendleton County during the 1994 tournament. Only people around back then were the school’s current athletic director and assistant coach Wendy (Rankin) Mahanna, who was an assistant coach on David Poe’s staff that season, and the Doctor of Sports.

“Happy to still be playing,” said Coach Watson, whose team will be eyeing their first trip to the region championship game since 1989 with a win. “I think defeating Campbell earlier gives our girls some confidence in our ability to win on their home floor. Will be a challenge, but we are looking forward to it.”

The Lady Camels first-year Coach Nolan Boone said that Bourbon County has been one of the top teams in the tenth all year long. “We know them, and they know us. Each team has an identity of playing extremely hard, so it’ll come down to execution.”

The first semifinal game this evening will have No.1 Bishop Brossart (24-5) going up against 3-time defending Region Champion George Rogers Clark (20-10) at 6:00. Brossart won the regular season meeting between the two in Winchester 55-54. 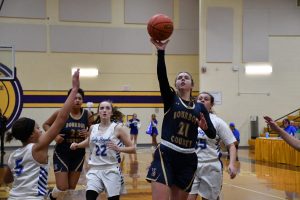 With Bourbon trailing 9-4, Hardin decided that it was time to put her team on her back.

A late three by Hardin made it 9-7 after one quarter of play. A bucket by Mason’s Mylin Henry made it 11-7 just 40 seconds into the second frame. Bourbon answered on their end of the floor on a put back from Hannah Hamelback and a rightwing three by Hardin that gave BC their first lead of the night at 12-11. The Lady Royals moved back in front 13-12 on Rachel Payne’s basket just inside the circle. Not to be outdone, Hardin’s layup pushed her team back into the lead at 14-13 and it would be a lead they never relinquished from that point on as the first half came to an end.
Bourbon’s leading scorer McLain Murphy found her groove in the second half and so did 6-3 freshman Jhaven Meade, as well as the junior Hamelback as they decided to take the load off the eighth grader.

BC opened the third with five straight points to push their margin out to 19-13. A three by Mason’s Hannah Adkins made it 19-16 before the Lady Colonels closed the quarter on a 10-2 run to increase their advantage to 29-18. Murphy led her team during the period with 7 points, Meade had 4 and Hamelback 2.

Over the first three quarters, neither team made a trip to the free throw line but in the decisive fourth quarter, the Lady Colonels would spend the majority of their time at the charity stripe.

The first four minutes of the fourth, Bourbon only hit 3 of their 9 free three attempts, which gave Mason County some hope, although they still trailed the Lady Colonels by 11 (34-23) with under five to go following a driving lay-up from Jaydyn “Shorty” Goodwin.

A 6-0 Mason run got it to 34-29 at the 1:58 mark. Murphy would then step to the line and hit four straight as Bourbon’s lead went back to nine at 38-29. A three from Haley White made it 40-35 but Hardin would then cap off her best night in a Colonel uniform by calmly sinking two free throws at the end that got it to the final seven point margin. Watson’s team finished the final frame making just 11 of 21 of their free throws, which kept Mason in the game.

Overall, it was another rough night of shooting the ball for Coach Brad Cox’s Lady Royals, although one should give some credit to Bourbon’s defense, who didn’t make it easy by challenging nearly every shot attempt by Cox’s team. Mason came into the contest averaging 70 points per outing, while hitting 26 treys over their final three regular season games. 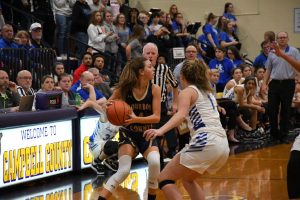 NEEDING SOME HELP – Lady Colonel Laiken Hardin looked for an open teammate after being stopped by Mason County’s Jayden Walton. Although Hardin may have been cornered on this play, it was her first half heroics that got Bourbon going, which eventually led them to their first victory in the 10th Region Tournament in 26 years.           WARREN TAYLOR I Bourbon Schools Media Relations

Bourbon was led by Murphy’s 14 points, 8 rebounds and 3 steals. Hardin totaled 10 points and 8 rebounds. Meade just missed a double-double with 9 points, 20 rebounds and 3 blocks. Despite her slow start, Hamelback finished with 6 points and 11 rebounds, while Shorty Goodwin contributed 3 points.

Payne led the Lady Royals with 12 points. Macey Littleton followed with 8 and 5 points each came from White and Adkins. Henry’s 3 and Nariyah Harrison’s 2 points rounded out their scoring.

“Very happy with the win! Laiken stepped up and kept us in the game offensively in the first half. Jhaven was awfully good again on the glass and McLain finally got on track in the second half,” Coach Watson said afterwards. “Tremendous effort from players on floor and our bench was outstanding, helping us out with calls because it was so hard to hear in the gym.” 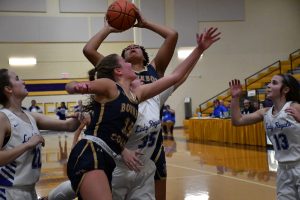 MEADE OWNED THE BOARDS – After pulling down one of her game-high 20 rebounds on the evening, Bourbon’s 6-3 freshman center Jhaven Meade is now looking to score just in front of three Mason County defenders #22 Hannah Adkins, #35 Haley White and #13 Macey Littleton, as well as teammate Hannah Hamelback, who finished her night with 11 rebounds. WARREN TAYLOR I Bourbon Schools Media Relations