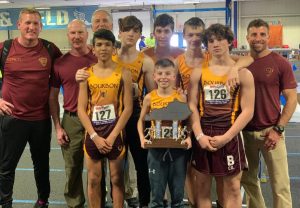 At The 2020 KTCCCA State Indoor

Jefferson County Traditional won the team title with 62 points. Bourbon had 44 points, as they tied with Louisville’s Farnsley Middle School for the second spot. Raceland Middle was fourth with 41 points and Clark County’s Campbell Middle rounded out the top five with 25 points. 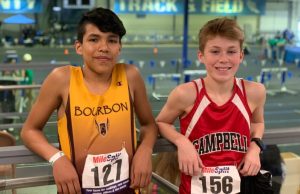 Staying with the middle school level, Lady Colonel eighth grader Bethany Simpson sacrificed her chance of winning multiple state titles to help out her team. Simpson’s very grueling day saw her compete in four events during the middle school meet that morning and then she returned later that afternoon to participate in three more events with the high school team. When her day was all said and done, Simpson was part of (1) state title and (3) state runner-up finishes as she helped the middle school and high school Lady Colonels to third place in the overall team standings. Her state title was part of the girls’ middle school 4×400 relay team that also included Ashley Gambill, Addison Felty and Alana Puscas. 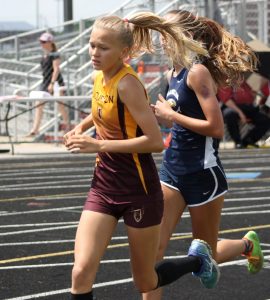 SHE CAN DO IT ALL – Lady Colonel eighth grader Bethany Simpson played a huge role on the middle and high school team during last week’s KTCCCA State Indoor Track and Field Meet.

Other highlights for Bourbon saw sophomore Anna Hunsinger win the AA State Pole Vault Title, which took place inside the Whelan/Nault Vault Center located in Shelbyville, Kentucky. Hunsinger defeated Brianna Isa, a freshman out of the Christian Academy of Louisville, as both cleared 9 feet but Hunsinger won the title because she had the least amount of misses up to the height of 9 feet, 6 inches that neither athlete cleared. You can read more about Hunsinger’s state title in this week’s Bourbon County Citizen sports section.

Freshman Kylie Hernandez finished as state runner-up in the Class 2A 800 meter run. She was also part of the state runner-up 4×400 and 4×800 high school relay teams. The 4×4 team included Makayla Felty, Jennifer Wilson and Tori Young, while the 4×8 team had Ashley Gambill, Felty and Katie Boshears joining Hernandez.

As expected, Ladyhound sophomore sprinting phenom Taesha Speaks, who will be competing at the New Balance Nationals Indoor meet this week in New York, defended her state indoor 55m title by blowing away the field in a time of 7.36 seconds, which was the fastest time clocked for the day regardless of class. Speaks is currently ranked second in the state in the 55m, 60m and 200  meter dash. 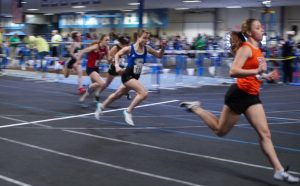 SPEAKS DEFENDS HER TITLE – Paris Ladyhound sophomore Taesha Speaks outdistanced second place finisher Karis Applegate from Bracken Cunty to win and defend her Class 1A 55m dash title. Speaks’ time of 7.36 seconds was the fastest 55m time of the day, regardless of class. STACEY SPEAKS I For PHS Track

Other Paris highlights saw freshman jumper Katy Chumbley place fourth in the long jump and fifth in the triple jump, where she recorded a personal best leap of just under 31 feet. One thing to note, Chumbley was the only freshman to score points in both events, as her and Speaks helped the Ladyhounds to seventh place in the overall Class 1A team standings.

Below is every participant from Bourbon and Paris, high school and middle school that scored during the state indoor meet. 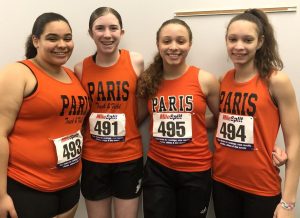