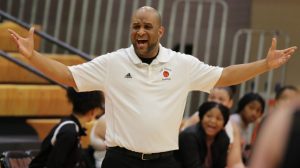 GIVE ME SOMETHING – Ladyhound fourth year Coach Aaron Speaks disagreed with a call that was made by an official during an earlier game this season. Speaks led his Paris team to a 25-6 record, their most wins in a season in 16 years. JENNIFER ARNETT I For PHS Athletics

To Their Best Season In 16 Years

PARIS, KY – Although his team’s season didn’t end the way Coach Aaron Speaks would’ve liked, it still turned out to be their best season in 16 years after the Paris Ladyhounds finished off their 2019-2020 campaign with a 25-6 record. Those 25 wins was the most in the 10th region and the third most wins in a season by a Ladyhound team.

Paris managed to win majority of those games without their star player Zoe Strings, who missed 17 of the team’s 31 games, and for that reason and few others, the Ladyhound fourth-year coach walked away with Coach of the Year honors in the 10th Region, as well as the KABC Coach of the Year in the region. To lose such a top notched player that earned first team all-region honors and honorable mention all-state, one could see why it didn’t come as a surprise that the Paris coach won both awards.

Speaks, his staff, along with the players, have put in countless hours to get the program back to being respectful after it was near “rock bottom” just five years ago, where it saw teams schedule Paris just for a win. Today, those same teams will not play them, which is a testament on how far the program has come under Speaks and his staff in a short period of time.

“I just want to take the time to say thank you for all the kind words and congratulations that people sent my way after winning both awards,” Speaks said over a Facebook post. “I really appreciate it … it means a lot. It’s truly an honor to receive such an award. I’m blessed to have an awesome dedicated coaching staff and a great group of young ladies, who have worked extremely hard this season. Again, thank you all!” 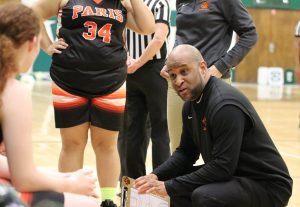 Some of the things that were accomplished by this past season’s team: picked up the program’s 700th win; first undefeated season at home (14-0) since 1977 and the first Ladyhound team to go undefeated at Earl Redwine Gym; ranked as high as No.1 in the KHSAA RPI 10th Region Rankings; finished 4th in the final 10th Region Media and Coaches Poll; second most regular season wins (25) in the history of the program; most points scored (1,679) in a season since 2003-2004; knocked off George Rogers Clark for the first time in 12 years, ending a 28-game losing streak to the Lady Cardinals; snapped a 12-game losing streak to the Mason County Lady Royals; coached two players that scored their 1,000 point within the same season.

With every player on his roster returning for next season and with the return of Strings, next year, although Speaks has beefed up his schedule big time, could be the season this program has been eyeing for a long time. They, along with several other teams in the region, will have a legitimate shot at winning the region title.

“I like our chances,” Speaks said. “But I’m pretty sure that other coaches in the region like their chances as well. We will have to earn it.”

Deserving honor(s) Coach Aaron Speaks. Congratulations to you, your staff and team for a job well done!

Editor’s note: You can see the story inside today’s Bourbon County Citizen’s sports section, in the print or the online edition at www.bourboncountycitizen.com 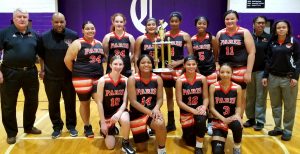 CLASSIC CHAMPIONS – The Paris Ladyhounds hoist their championship trophy after winning the first annual KySports.tv Girls Christmas Classic that saw Coach Aaron Speaks’ team beat host Caverna 47-42 in the title game back in December. Speaks was named the 10th Region Coaches Association’s Coach of the Year, as well as the KABC 10th Region Coach of the Year. IVAN K. RICE I doctorofsports@aol.com