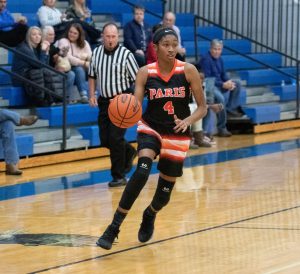 STRINGS LEADING THE WAY – Ladyhound junior guard Zoe Strings controlled the basketball during her team’s victory over Lexington Christian Academy back in December. On this afternoon, Zoe scored her 1,000th career point to become the 19th Ladyhound player to reach that milestone in their career. JENNIFER ARNETT I For PHS Athletics

“I’m Proud Of What My Team Accomplished,

But I Wanted To Be Out There”

PARIS, KY – Stats wise, Paris Ladyhound junior guard Zoe Strings was well on her way to having one of the best seasons ever by a Ladyhound basketball player before a serious ankle injury ended her season after playing in just 14 games.

Prior to her season ending injury that took place in the semifinal round of the 2020 All “A” Classic 10th Region Tournament against Bishop Brossart, before that Strings missed three games after suffering a concussion she sustained following a nasty spill during the title game against host Caverna in the Kysports.tv Girls Christmas Classic that saw Strings still walk away with the MVP award and her team the Classic Title.

Missing 17 of Paris’ 31 games, Strings, who joined the Ladyhound 1,000 point club back in December, still managed to be among the leaders in every category in the girls’ 10th Region, being the only player in the region to do so until her name had to be removed from the list because of lack of games played. She finished her shortened year averaging 13.0 points per game and 6.9 rebounds per outing. She also had 66 steals, 46 assists, blocked 45 shots and led the team in field goal percentage (45.1), three-point field goal percentage (37.0) and free throw percentage (72.2).

With Strings on the floor putting up huge numbers that saw her on a collision course of breaking school-records for assists, steals and blocks in a single season, the Paris Ladyhounds were well on their way to having a memorable season but without their leader, Paris’ promising season came to an end in the semifinal round of the 40th District Tournament against cross-town rival Bourbon County.

“It was extremely tough having to watch my team from the sidelines,” Strings said in a text message. “There were so many big games I wish I could’ve played in. I’m still extremely proud of my team and all that they accomplished, but I wish I could’ve helped them down the stretch.” Aaron Speaks’ team would go on to have the best record by a Ladyhound team since 2004 and the most wins in the region with 25. 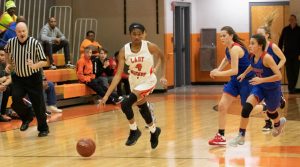 STRINGS JOINED AN ELITE CLUB – Zoe Strings, shown here running the offense during Paris’ victory over Montgomery County at Earl Redwine Gym, became the first Ladyhound player to be named First Team All-Region and to the All-State Team during the same season since 2012. JENNIFER ARNETT I For PHS Athletics

Despite missing so many games, the silky smooth Strings did enough to get the attention of the coaches in the region and around the state as post season accolades started coming her way.

Zoe was named to the All 40th District Team, First Team All-Region and here recently, she was recognized on the Herald Leader’s All-State Honorable Mention team, becoming the first Ladyhound player (Alexis Tye) since 2012 to accomplish all three feats within the same season. The one that stood out the most for Zoe was being named to the all-state team.

“I’m grateful to those who considered me when voting,” Strings said. “I know it may have been easy to forget about me since I didn’t play the second half of the season.”

Coach Speaks was also happy for his star player that he called a team player first who never worried about individual stats.

“I think Zoe being voted Honorable Mention All-State by other coaches from all over the state is a great honor and a huge accomplishment. We all know how valuable she is to our basketball team but to see how other coaches feel about her speaks volumes to how great a basketball player she really is. Not only did she achieve this accomplishment, she still remained ranked all season long in every stat possible that was kept within the 10th Region all while missing more games than she played. It’s no surprise to see Zoe mentioned with some of the best players in the state, while remaining humble with every accomplishment that she makes. The Coach went on to say that not only is Zoe a great basketball player but she’s an even better student and human being. “I’m very proud of Zoe and I’m truly blessed to have the opportunity to be her basketball coach. Just imagine if she had played an injury free season.”

Moving forward, Zoe said that she has been rehabbing and trying to get herself back in shape in hopes of returning for, what appears to be, a very shortened track season.

“Due to the Coronavirus outbreak we may not have a track season, but I will still be trying to strengthen my ankle and get myself back in shape just in case we do.”

Do what you do best Zoe Strings and that’s work hard! 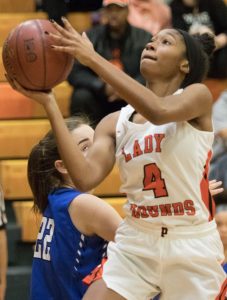 HAD A CHANCE TO BREAK SEVERAL SCHOOL-RECORDS – Zoe Strings’ hot start to her season, put her on a collision course of breaking school-records for assists, steals and blocks in a single season, but her season ending injury kept her from attaining those accomplishments, as well as moving into the top five on the Ladyhounds all-time career scoring list. JENNIFER ARNETT I For PHS Athletics

Editor’s note: You can see the entire story, on Paris’ Zoe Strings, inside this week’s Bourbon County Citizen’s sports section, in the print or the online edition at www.bourboncountycitizen.com