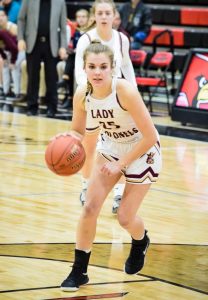 BREAKOUT YEAR FOR HANNAH – Prior to her junior season, Hannah Hamelback totaled 240 points and 158 rebounds over 59 games. This past season, she finished with 270 points, grabbed 264 rebounds, with 138 of those coming on the offensive end to lead the team, in just 33 games. In addition, she went to the free throw line 143 times, after going to the charity stripe just 112 times her freshman and sophomore season combined.
KRISTA BARNETT I For BCHS Sports

Turned Herself Into A Baller

By Putting In The Work

PARIS, KY – Many could’ve easily won the basketball award that is given out annually by the Doctor of Sports, but after seeing the breakout season that Bourbon County Lady Colonel junior forward Hannah Hamelback had on the court, her pick as the 2020 Doctor of Sports’ “Breakout Player of the Year” was an easy choice, although others were worthy but none stood out more than H&H.

Each year, sports writers witness a performance that someday they’ll look back on as the moment that a star was born. Hamelback had plenty of those performances, as she displayed significant growth from her previous years with the Lady Colonels, after posting huge numbers night after night. Her ability to do what she did on the basketball court more than offset the loss of three key seniors from their 2018-2019 team that produced the program’s all-time second leading scorer.

Given that Bourbon had just lost three of their best players off a 21-12 squad following her sophomore season, Lady Colonel Head Coach Bill Watson came to Hannah and told her that she will be filling big shoes this season and that she needs to be focused. 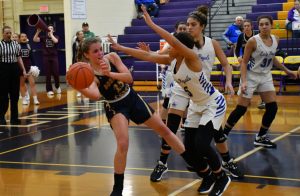 AVOIDING THE PRESSURE – After pulling down this rebound, Lady Colonel junior Hannah Hamelback tries to slip a pass past Mason County’s Mylin Henry during the opening round the 10th Region Tournament. Hannah finished her night with 6 points and 11 rebounds to help her team win their first region tournament game in 26 years. WARREN TAYLOR I Bourbon Schools Media Relations

“I took pride in knowing I would be someone to look out for this year,” Hamelback said over email. “My personal goals never changed. Since the beginning, it’s been the same for me – never settle for satisfaction. Keep pushing until you can’t push anymore. Even then, keep going.”

Hannah, a former dancer, took her own words to heart and went out and finished off her best season in a Lady Colonel uniform, while leading them back to the region tournament and another 20 win season.

“I have always taken basketball seriously. I quit dancing, something I was really good at and loved, to play and focus on basketball. This year, I was finally given the opportunity to show everybody how serious I take the sport, to my teammates, my coaches, and myself. I felt I had something to prove being a first time starter. I was more focused for this season than I have been for anything in my life, and seeing the results made everything worth it.” 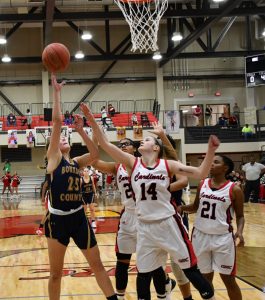 GOING UP – Bourbon’s Hannah Hamelback found enough separation between her and GRC’s Kennedy Igo and Brianna Byars to get this shot attempt off in the championship game of the girls 40th District Tournament. Hamelback led Bourbon on this evening with 15 points and 4 rebounds. WARREN TAYLOR I Bourbon Schools Media Relations

Coming into her junior year, Hannah totaled 240 points and 158 rebounds over 59 games. This season alone, she finished with 270 points, while grabbing 264 rebounds, with 138 of those coming on the offensive end to lead the team, in just 33 games. She also added 50 steals, 24 assists and went to the free throw line 143 times, after going to the charity stripe just 112 times her freshman and sophomore season combined. Big difference? You better believe it!

“As the year progressed, she kept improving and improving,” said Coach Watson. “We felt she was capable of what she did, but she really became comfortable in her role. Hannah caused some matchup problems for opposing coaches as she became more of an offensive threat. She became a leader for our team and that was just as important as what she did on the floor!”

In the end, it was Hamelback who elevated her game to another level to help her team win and because of that, recognition started coming her way. She was named to the regular season All-District Team and All-Region Tournament team. Now, she can add the Doctor of Sports’ “Breakout Player of Year” award to her list of accolades following her superb season. 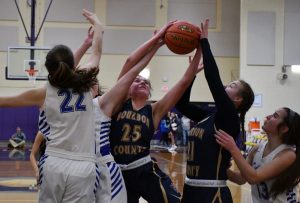 THIS IS MY REBOUND – With nothing but determination, Lady Colonel junior Hannah Hamelback battled two Mason County players as well as teammate McLain Murphy to pull down this rebound against the Lady Royals. Hamelback finished her season with double digit rebounds during Bourbon’s last 7 out of 9 games, including 11 on this night against Mason County. WARREN TAYLOR I Bourbon Schools Media Relations

EDITOR’S NOTE: You can read Hannah’s entire story in this week’s Bourbon County Citizen that will be on the newsstands and online at www.bourboncountycitizen.com tomorrow, 4-9-2020.