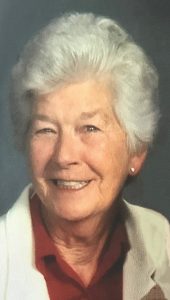 Lois Ann Sullivan Anderson, 85, widow of William “Bill” Adolph Anderson, died Friday, June 5, 2020 at her home in Paris, KY.
Born in Georgetown, KY, she was the daughter of the late Virgil L. and Julia Roberts Sullivan.  She was a lifetime resident of Paris, KY where she was a homemaker and a member of the Catholic Church of the Annunciation, Paris, KY.

In addition to her husband and parents, she was preceded in death by four sisters, Mildred Ryan, Jean Kenley, Dorothy Turner, Ethel Anderson and one brother, Carl Sullivan.

Pallbearers will be Shannon Sullivan, Jason Sullivan, David Wagoner, Jonathan Anderson, Gus Koch and Lawrence Anderson.
The funeral arrangements were entrusted to the Lusk-McFarland Funeral Home, 1120 Main St., Paris, KY 40361.
The online guestbook is at www.lusk-mcfarland.com and a 24 hour information line can be reached by calling 859-987-4387.