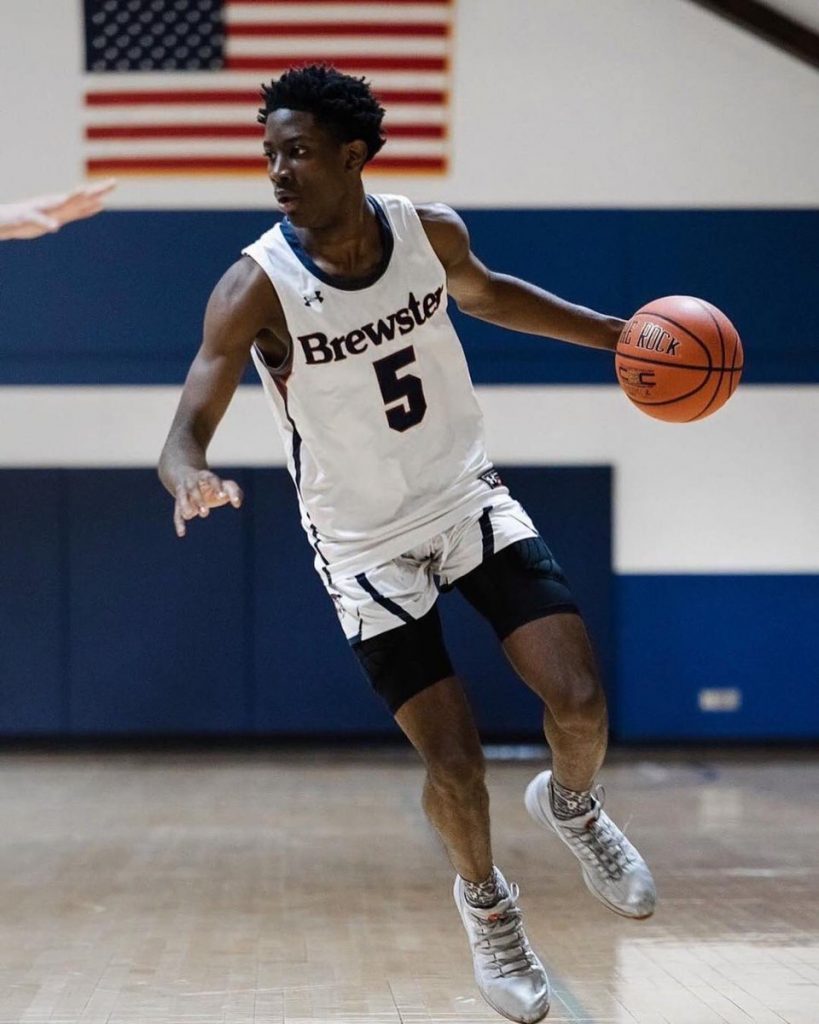 He’s seen him in the EYBL and also in New York in a tournament Nike puts together for different neighborhood teams.

“Terrence is a good kid. He knows our kids and I have had a lot chances to see him play. Very, very well mannered dude and very talented,” Wehye said.

Wehye says it is not absurd to think that Clarke could be John Calipari’s best recruit since John Wall, a former overall No. 1 NBA draft pick.

“I mean John Wall was big and fast but John Wall was not able to score like a Terrence Clarke. He can score that basketball,” Wehye said. “He can still do it even when you know he’s going to try and score.

“My biggest thing is he can pass but he has to make sure he passes the ball a little bit more (at Kentucky)  unless they let him play the 2. Then you have what we call in New York a certified bucket.

“Tough kid. He wants to win a lot. Sometimes you see him get frustrated because he wants to win. My experience with him he was not a bad kid in my eyes. He just competes.”

Clarke is not a New York player — he’s from Boston and played at Brewster Academy in New Hampshire — but Wehye says he has the characteristics of many New York players.

“A major college coach told me once he wanted guys from the east coast on his team, especially from New York,” Wehye said. “There is a lot of good weather on the west coast but in New York it snows, rains. You have to take the train to get places.

“There are a lot of things you have to do in the east that makes it rougher coming up  and gives you that edge. Terrence has that. It helps guys. That’s what happens when you come from the east coast. To me, that’s just another plus for Terrence.”

If that’s not enough to excite Kentucky fans about the 6-7 Clarke, a consensus top five player in the 2020 recruiting class, let Wehye add one more thing.

“The biggest thing to excite you even more about Terrence is I still think he can be more of a juggernaut defensively with his length because of his versatility. I know coach Cal will challenge him with that and when he does that, then he’s going to be dynamic on both ends of the court,” Wehye said. “You can’t say that about many players but I think you will be able to about him.”

* * *
Frederick Douglas junior defensive back Ty Bryant doesn’t need a history lesson when it comes to University of Kentucky football because his father, Cisco Bryant , was a receiver at Kentucky from 1983-85.
The 6-0, 175-pound defensive back admits the UK offer is very attractive because his father went to school there and a lot of people connected with the UK program still know him. But he’s also seen the rise in popularity in UK football in recent years under coach Mark Stoops.

“We are getting a lot of phone calls (from college coaches) about him. A lot of high level schools are evaluating him. He’s got plenty of schools that love him, including some top echelon teams.”

In addition to Kentucky, Bryant has offers from West Virginia, Tennessee, Maryland, Marshall, Cincinnati and Dartmouth.

One reason college coaches like Ty Bryant is his speed. McPeek says he’s not exactly sure of what his 40-yard dash time would be but estimates it would be 4.5 or better.
“He is really fast. He has good hips and flexibility that college coaches look for,” McPeek said. “They also like that he is a very sure tackler.

“We really have not used him offensively the last two year but he could be a good wideout, too, because he has really good hands. I think he’ll play a lot bigger role this year for us because he’s such a talent that you have to find ways to use him more.” 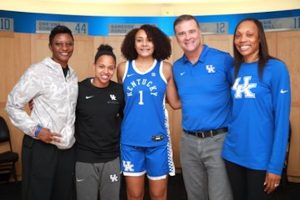 Despite her lofty national ranking, Kentucky coach Matthew Mitchell warns that next year will still be an adjustment for freshman Treasure Hunt.

With the success that All-American Rhyne Howard has had in two seasons at UK, expectations are already astronomical for incoming freshman Treasure Hunt — who has a higher recruiting ranking than even Howard has and is the highest ranked player coach Matthew Mitchell has signed at UK.

“With expectations you  can look at a player’s size, speed, agility, explosiveness and athleticism and know where they are on scale of physical talents and gifts,” Mitchell said. “I just like to go from sort of a blank canvas approach for any player, including Treasure.”

Mitchell sits down with every freshman player multiple times to inquire about what they want to become as a player, person and student. That won’t change with Hunt once he gets her on campus in late July.

“She is a supremely talented prospect that we believe has gifts and talents to make a big impact as a freshman,” Mitchell said. “But you couldn’t tell with Victoria Dunlap, Adia Mathis, Maci Morris and now with Treasure just how good they would be. You just don’t know until it happens.

“Adia was ranked as the 125th best player in country in one recruiting service and 67th in another. She had unbelievable talent and as a freshman was able to handle practice and the role she settled into. She became an All-American, two-time SEC Player of the Year.”

That led him to remember Jennifer O’Neill, the first McDonald’s All-American he signed. She had a “difficult” freshman season before becoming a “top level” player who made the WNBA.

“Both Adia and Jennifer had different rankings, different struggles but both went on to be great players and pro players,” Mitchell said. “It’s just hard to say how any player, no matter how highly ranked, will do until you see how they handle their freshman year.”

The 6-1 Hunt has the right pedigree. She also was a McDonald’s All-American and is a top 10 recruit. She averaged 24.7 points, 5.3 rebounds and 3.2 assists per game for Hamilton Heights Christian Academy in Chattanooga. She’s a five-star signee with experience in some of the nation’s most prestigious events.

“We are going to work really hard to make sure she thrives as a freshman,” Mitchell said. “If she plays up to her abilities, she can make an incredible impact and we hope she does. But you have to give any freshman, even one as talented as Treasure, a chance to get here and see how she adjusts before you proclaim that she can do this or that.

“Treasure was a significant recruiting event for us. We are planning on her being a major player and know she has all the tools to do that. But you just have to be patient and give her time to adjust and everybody adjusts at a different pace.”

“Grateful to God he is with us and still the beset dad and husband we could have on our team,” his wife, Jenna, posted on Facebook Saturday.

(Mitchell made his comments about Hunt in an interview before he knew he would need surgery.) 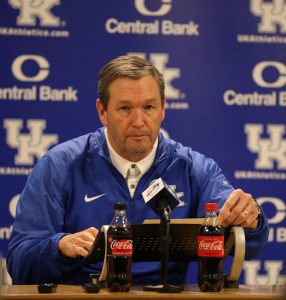 A recent ranking put Kentucky’s Mitch Barnhart among the Southeastern Conference’s worst athletic directors, something that Allison Tamme  — the wife of former UK all-SEC tight end Jacob Tamme — certainly did not agree with.
“Mr. Barnhart is an incredible man of integrity, compassion, heart and intelligence. He invites one of our Swings for Soldiers families into his (football stadium) suite every year with his own family and treats them like they are also,” Tamme said. “ I could write a novel about all of the wonderful things he has done in the 17 years we have known him, but I will stop there.”

Allison and Jacob Tamme have raised over $1 million dollars to build home for wounded military personnel with Swings for Soldiers, a golf scramble/charity auction that is annually held in July. Barnhart has been a regular participant in the event as well as a supporter of those the event has helped as Tamme noted.

Allison said COVID-19 has forced plans to be altered for this year’s event.

“Right now we have a tentative date, nothing is set in stone yet pending COVID,” Allison Tamme said. “Hoping to make an announcement soon.”

Younger University of Kentucky basketball fans likely don’t even know who Louie Dampier was even though he’s in the Naismith Hall of Fame and could be the best shooter ever to have played for the Wildcats. He was part of Rupp’s Runts with Pat Riley, Larry Conley and Tommy Kron that reached the 1966 national title game. When he graduated from UK, he had 1,575 points — the third most in UK history at the time behind only Cotton Nash (1,770) and Alex Groza (1,744). And remember there was no 3-point shot or freshman eligibility then.
His shooting prowess continued in the professional ranks. During the 1968-69 ABA season, Dampier made 199 3-pointers for the Colonels. It took 26 years for another pro player to make more. An even crazier number is that Dampier made 13 percent of the 3-pointers made in the ABA in that one season. He made 198 3’s the next season and 103 in 1970-71. That meant he had 500 3’s in three seasons and he had a record 794 3’s in 10 ABA seasons when he scored 13,726 points but also had 4,044 assists. He also hit a then professional record 57 straight free throws during the 1970-71 season 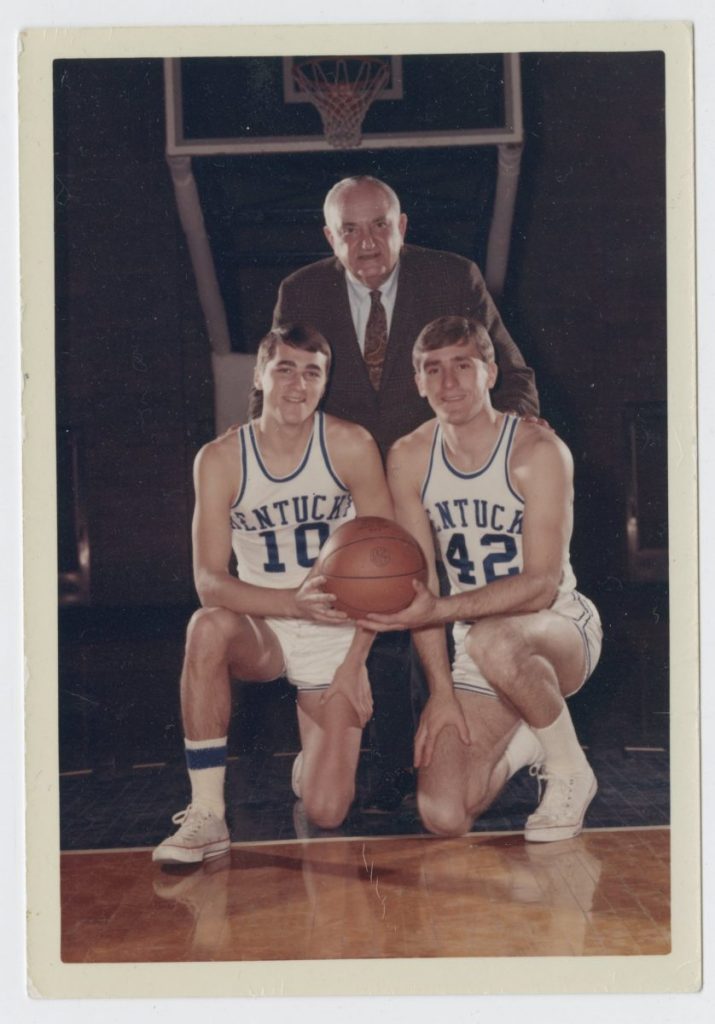 Louie Dampier, left, with former UK teammate Pat Riley and coach Adolph Rupp, is one of the best shooters ever to play at UK or in professional basketball. (UK Athletics Photo)

“One time after practice at the Louisville Gardens, I’m talking to the guys at center court and Louie begins shooting in the deep corner about 19-20 feet,” Keathley said.  “As I’m talking, Louie keeps hitting shot after shot. Every one out of three or so you can hear the swoosh of the net. The backspin is creating big time string music. So much so that my team begins to notice Louie not missing and we all just turn and watch.
“I didn’t see him miss for what had to be 3-5 minutes of continuous shooting in the same deep corner spot. By the way, he did this while wearing a huge Denver Nuggets jacket (he was an assistant coach for one year with the Nuggets). He never took it off.

“Once he realized we were watching he said, ‘Sorry Coach, I didn’t mean to interrupt what you were doing.’ Walked out never missing a shot.”

Quote of the Week: “It just shows how he has elevated the program. You can judge a coach’s career off what his individual players have done. He has had the best punter (Max Duffy), running back (Benny Snell), best defensive player (Josh Allen) and some of the best offensive linemen here,” center Drake Jackson on why UK coach Mark Stoops is getting more national credit.

Quote of the Week 2: “He’s a dude that is active. He can really finish around he rim catching alley-oops or whatever. He’s very good running the court. He’s really active and that will make him a very, very good player,” Our Savior Lutheran (N.Y.) coach Peter Wehye on Kentucky basketball signee Isaiah Jackson.

Quote of the Week 3: “Hey NCAA what are we doing? You’re telling 1000’s of athletes they can’t even volunteer THEIR time with THEIR coach to prepare for THEIR sport that they haven’t played in over 3 months?? Yet, we’re giving the green light to winter sports?? Common sense must take over,” Kentucky volleyball coach Craig Skinner’s reaction on social media to his players not being able to work out on campus this summer even though basketball players can.