He Will Be Harrison County’s 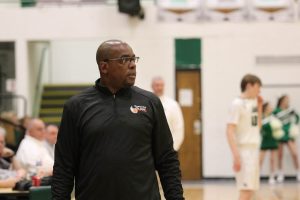 BROOKS IS MOVING ON – After seven seasons with the Paris Greyhound basketball program, Terence Brooks has accepted the position as Harrison County High School’s new boys basketball coach. He inherits a Thorobred team that finished 5-25 this past winter. JENNIFER ARNETT I For PHS Athletics

CYNTHIANA, KY – Thanks to a phone call this morning, the rumor circling around the 10th Region for days, is now official.

“For the past three years, I’ve been looking to move on to a bigger school. I feel like Harrison County will present a challenge for me but I happily accept the position as their next basketball coach.”

Brooks, after a four-year coaching stint coaching the Berea College women’s team, returned to Paris in 2013 to help revive the struggling Greyhound program. Before his arrival, the Hounds went six straight seasons without reaching double digits within the win column.

Brooks, a 1985 graduate of Paris High School, where he helped the program reach their last 10th Region Championship game, revived the Greyhound program and took it to a level it hadn’t seen since the Cory Dumphord, Alvin Sims, Juan Byars and Chez Marks days.

Under Brooks, the Hounds won three 40th District Titles in arguably the toughest district in the 10th region and one of the toughest in the entire state. They also advanced to the region semifinal three times. Their biggest accomplishment came during the 2016-2017 season when his team won the Kentucky All “A” Classic Statewide Championship for small schools, knocking off the top four teams in the state tournament that year.

Brooks, who previously coached the Paris Ladyhounds before leaving for Berea, finished his seven years with the boys program with a 124-84 overall record, with 36 of those losses coming over the past two seasons. His overall record at Paris while coaching the boys and girls was 229-155. He led the Ladyhounds to the 2004 10th Region Title and six All “A” Classic 10th Region Titles, including a state runner-up finish in 2008. 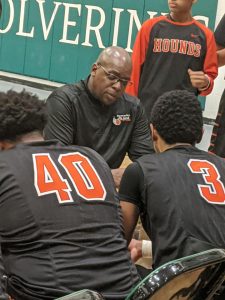 HIS LAST VICTORY – Coach Brooks talked to his team during a timeout this past season in a win over Western Hills, his last victory as the basketball coach at Paris. During his seven seasons, his teams won three district titles, reached the 10th Region semifinal three times and won 124 games. JENNIFER ARNETT I For PHS Athletics

Brooks will take over a Harrison County program that finished last season with a 5-25 record under Coach Larry Kendall, who stepped away from his position after eight seasons with the team. One of their wins was a 64-61 triple overtime thriller against Brooks’ shorthanded Greyhounds on the Hilltop. Two years ago, the Thorobreds won the 38th District Tournament Title, which advanced them to their seventh straight 10th Region tournament. This past season was the only season the Breds did not make it out of district play under Kendall, who finished with a 96-154 overall record.

Coach Kendall shared his announcement about leaving the program on his Facebook page back in June.

”Had a meeting with my players and I’ve announced my resignation as boys’ basketball coach effective June 30th. It has been a 25 year commitment of life altering sacrifices both good and bad! I always attempted to make the right decisions for everyone concerned and hopefully, we made people better! Very fortunate to have coached several fantastic players, great people and learned a lot about life and coaching from several great coaches. Thanks to the Harrison County Board of Education and our school administration for your support and providing me the opportunity to serve our student athletes.”

After coaching the smallest school in the 40th District (George Rogers Clark- 6A, Montgomery County- 5A, Bourbon County- 4A), Brooks will now have the satisfaction of coaching the biggest school (Harrison County- 4A, Pendleton County- 3A, Nicholas County- 1A, Robertson County- 1A) in the 38th District … although that wasn’t the reason he decided to leave his alma mater. His Paris teams finished with a 21-5 record against schools from the 38th and they were 27-21 challenging schools from the 40th but only 1-13 the past two seasons after the Greyhounds lost 19 seniors leading up to those two years.

Brooks, who made the announcement to his current Greyhound team earlier today, will be introduced to his new team on Monday during a meet and greet at Harrison County High School.

Brooks told his Paris team that he has always talked to them about their dreams and goals and what they need to do to accomplish them. “I told them to keep working hard and take advantage of the opportunities that’s presented to them and always be ready for a challenge and understand what it takes to reach their dream and goals.” He went on to say that he would like to thank Paris High School and the administration for the opportunity they gave him to lead the program over the past seven years and wish his former team nothing but the best. 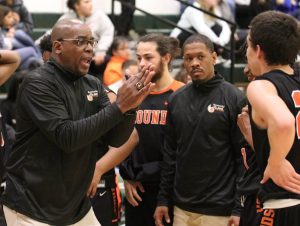 JUST GET IT DONE – Coach Terence Brooks shouted instructions to his team during a recent game this past season. His team finished the year with a tough loss to eventual district and region champion George Rogers Clark in the semifinal round of the 40th District Tournament. JENNIFER ARNETT I For PHS Athletics

Knowing that it was not an easy decision to make, after talking to Coach Brooks over the past few weeks, here’s hoping for a successful run for him on his new coaching journey.

“You got this Smoove!”

SIDE NOTE: Ironic as it may be, but Coach Brooks’ first game as a head coach came against Harrison County back on December 15, 1999 when he was an assistant coach for Coach Judy Cox’s Paris Ladyhounds. With Cox setting out with a one game suspension, Brooks guided Paris in their game against Mac Whitaker’s top ranked Fillies. 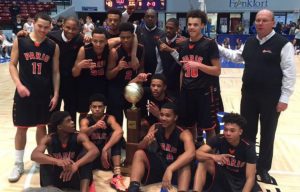 WHAT A RIDE – Coach Terence Brooks is pictured here with his 2017 Greyhound basketball team after they won the Kentucky All “A” Statewide Basketball Tournament inside the old Frankfort Farnham Dungeon Civic Center. Brooks’ team left no doubt after defeating the top four teams (Elliott County, Owensboro Catholic, Lexington Christian Academy, Newport Central Catholic) in the field to win the title.
JENNIFER ARNETT I For PHS Athletics