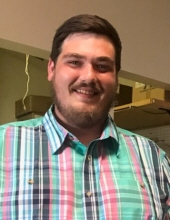 A native of Georgetown, KY, he was the son of James Anthony Arnold and Robin Denise Massey Arnold. He was a sales manager at Georgetown Pool Supply and a member of the Bourbon County Marching Band during which time they were named National Champions.

Hunter was raised in the Centerville United Methodist Church and also Baptist. He was a member at Leesburg Christian Church where he was a part of the praise and worship team.

Funeral services will be conducted at 1:00 PM, Wednesday, July 22, 2020 at the Leesburg Christian Church, 6005 KY-1842 Cynthiana, KY by Rev. Sammy Harris. Burial will be in the Jacksonville Cemetery.