Who Missed Most Of Her Track Season

PARIS, KY. – Let’s be honest. Obviously, the Coronavirus Pandemic that is known as COVID-19, was and still is, easily the top story of the year in 2019-2020, after it stopped the KHSAA State Basketball Tournament, as well as spring sports, leaving several teams and individuals from this area missing a chance at winning the Top Sports Story/Person of the Year.

Because of COVID-19, several teams that would’ve certainly been among the top 12 aren’t shown because they never got the chance to compete. Those teams were the Lady Colonels Softball Team, Paris Ladyhounds Track Team, Lady Colonels Track Team and Bourbon’s Baseball and Bass Fishing Team. As far as individuals that do appear (either the top 12 or honorable mention) but could’ve been much higher are Kaylyn Barnett, Brycen Collins, 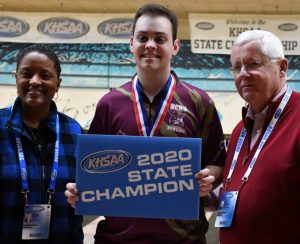 Bethany Simpson and last season’s Top Sports Story winner Taesha Speaks, who was on pace of doing something extremely special on the outdoor track before things had to shut down.

With that being said, when looking back at the short sports year for our local schools (Paris, Bourbon County and BCA, or anyone with ties to those schools) when it was all said and done, only one could prevail and Bourbon County junior bowler Wesley Yazell stood taller than the rest and that’s the reason why the Doctor of Sports choose Yazell as the Top Sports Story/Person of the Year. Yes, others were worthy but when one can label you as the best in the entire state, it’s a prestigious accomplishment that needs to be taken very seriously!

Yazell stunned the field to win the 2020 KHSAA State Singles Bowling Title that was held at the Executive Strike & Spare in Louisville. His previous two trips at state saw an early exit but this time around, the big-time bowler would be there for the long haul and it showed after he electrified the crowd by missing a perfect game by one pin that moved him into the top seed of the stepladder.

He started his day by bowling a 693 series (236, 247, 210) in the opening round that was good enough for fourth place heading into the elite eight. While there, he vaulted to the top after bowling the 299 that gave him an automatic bid into the championship game. Yazell met McCracken County’s Elliott Wilson for the title and 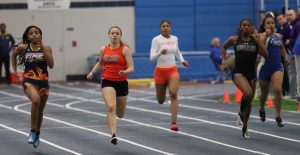 SPEAKS WAS ON PACE TO BREAKING LONG STANDING STATE RECORDS – This past spring season should’ve been one to remember for Paris Ladyhound sophomore sprinter Taesha Speaks. After a remarkably indoor season that saw her complete the season as the second fastest sprinter in the entire state (regardless of class), Speaks capped off her indoor season by qualifying to the prestigious New Balance Indoor Championship. Yes, Speaks was well on her way to breaking the state 1A outdoor record in the 100 meter dash that has stood for 40 years, and the 200 meter dash, which was set in 2007. She was the defending region and state champion in both events.                                                  JENNIFER ARNETT I For PHS Athletics

once he calmed his nerves and settled down, Yazell did his thing by knocking off Wilson 228-211 to win the biggest bowling prize for a high school bowler in Kentucky, a state title.

It’s not every day one can say they are a state champion but on February 6th, 2020 in Louisville, Kentucky, Wesley Yazell added his name among the “elite athletes” in the City of Paris and County of Bourbon, knowing that he is now part of a “fraternity of state champions” from this area.

“To win a state championship for me and my school is an amazing feeling,” said Yazell, who also won the Region 7 Championship as well as the Region’s Bowler of the Year. “I am very happy I was able to represent Bo 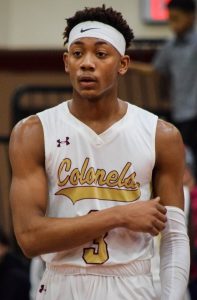 TWO SPORTS STAR – Bourbon County Colonel senior Amirion “AJ” Joyce was a Mr. Basketball Candidate and he also broke a few school-records on the football field while playing for the Colonels. KRISTA BARNETT I For BCHS Sports

Wesley’s Coach Johnny Yazell, who just happens to be his Dad, had this to say about his son winning the state title.

“I just love the passion Wesley has for the game. His drive is unmatched. Watching him achieve his dream of a state title gives me a sense of pride and a feeling I will never forget because I know how hard he worked to improve his game and how determined he was to reach his goal of a state championship.”

Coming in second was Paris Track star Taesha Speaks, who finished off a phenomenal indoor season that saw her qualify to the National Indoor New Balance Championship, while being ranked as the No.2 sprinter in the state of Kentucky.

When asked about not competing at the New Balance Nationals and missing out on her outdoor season, Speaks responded by saying, “God has a plan for everything, so I just have to stay faithful and continue trusting him, and what he is doing.”

(Most Wins In The 10th Region)

EDITOR’S NOTE: To see the entire story and the honorable mention selections, make sure you pick up a copy of today’s (07-23-2020) Bourbon County Citizen newspaper.