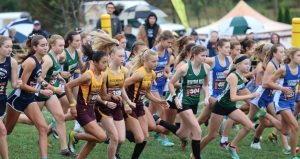 IF THEY GET A CHANCE – With so many talented runners returning, if they get their chance to compete, this could be the year the Bourbon County Lady Colonels Cross Country team win the program’s first state title. They will be led by senior Ximena Tamariz, junior Makayla Felty and freshman Bethany Simpson.                                       JENNIFER ARNETT I File Photo

PARIS, KY – If the Governor or the Health Officials don’t stop it, the 2020 fall high school sports season in the state of Kentucky will start in two weeks, while football will start its regular season in three weeks. And if they don’t, many of us will see one of the best cross country runners in the history of this town participate for Coach Matt Perraut’s Bourbon County Lady Colonels. The KHSAA has approved cross county to start their official fall practice on Monday, August 24th and the first date of competition is set for Monday, September 7th, unless something changes in the near future.

Heading into this already not normal season, freshman sensation Bethany Simpson will be one of the top long distance runners in the entire nation, after being ranked as the 27th fastest freshman in the latest Milesplit USA Rankings. Simpson is the second fastest freshman in Kentucky, trailing only Maddie Strong out of Scott High, who ironically beat the Bourbon star during last years’ 2A KHSAA XC State High School Championship as the top middle school finisher.

As an eighth grader, this up and coming runner placed 6th at the KHSAA 2A State Cross Country Championship, after placing 14th as a seventh grader. She was the Region 4 Runner-up, the second fastest eighth grader to finish the 5K state race and was named All-State for her fine showing. While competing at the KTCCCA Indoor Track and Field State, she sacrificed her chance of winning multiple state titles to help out her team. Simpson’s grueling day saw her compete in four events during the middle school meet in the morning and then returned later that afternoon to participate in three more events with the high school team. When her day was complete, she was part of (1) state title and (3) state runner-up finishes as she helped the middle school and high school Lady Colonels to third place in the overall team standings.

Simpson will be one of several talented runners that will return for the Lady Colonels XC Team that finished fourth in the state twice out of the past three years, placing fifth a year ago.

Looking to join Simpson this fall will be the likes of seniors Ximena Tamariz, Maddie Perraut and Lilly Page, juniors Makayla Felty, Katie Boshears, Abby Smith, Jocey Young and Tori Young along with sophomore Kylie Hernandez. Leading that crew will be Felty, who earned her first state medal a year ago after placing 9th at the 2A State KHSAA XC Championship. She was the second fastest sophomore to finish the 5k race, losing to the eventual overall individual state champion and was selected to the 2A XC All-State Team.

Here’s hoping these young ladies will get their chance to shine this season, a season that looks ever so promising.

Editor’s Note: You can read the entire story inside this week’s (8-20-2020) Bourbon County Citizen Sports Section.