A Berth To The Final Four

Will Also Be On The Line

CARLISLE, KY – There’s no secret that Covid-19 has played a role with the majority of the high school football teams in the state of Kentucky and Nicholas County can fall right in line with those teams.

It’s been a long, tough, and sometimes overwhelming road for Coach Robert Hopkins’ 2020 Nicholas County football team, but now that the dust has settled, the Bluejackets, despite playing only four games over the past 66 days, are still in the haunt for a shot to win the school’s first ever state football title. 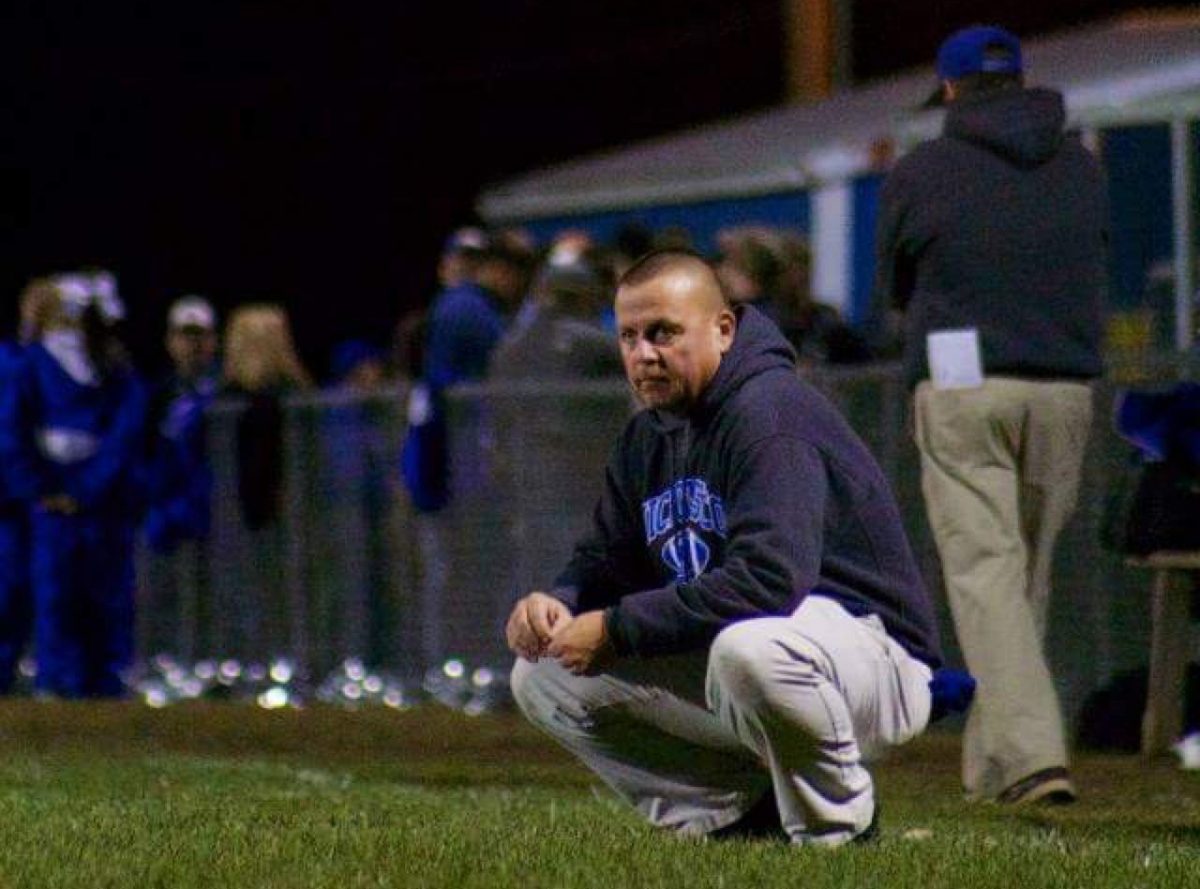 FORMER PLAYER, NOW COACH – Robert Hopkins, who played under the legendary Ben Pumphrey, has been the head football coach at his alma mater for the past 19 years, leading his team to back-to-back regional appearances for the first time in the history of the program. CHARLOTTE HOPKINS I Photo Credit

“We are excited to be still playing football,” said Coach Hopkins through text message. “But it has been a roller coaster of a year with Covid and all the protocols you have to do.”

After losing a triple overtime district game to Bishop Brossart back on October 3rd, the team from Carlisle didn’t play their next game until Halloween Eve when they tangled against their longtime rival the Paris Greyhounds. They would then take on district foe Bracken County the following week, before missing two straight weeks before facing Paris in the opening round of the 1A playoffs. Following their win over the Greyhounds, up next was a trip to Alexandria, where Hopkins’ squad was scheduled to face regular season district top seed Bishop Brossart, who gave the Bluejackets their only setback on the season. Although Nicholas wanted to play the game, Brossart had to forfeit the contest just hours before kickoff because of Covid-19, giving the Jackets, the back-to-back district champions, a smooth ride into tonight’s Region Championship game at Williamsburg.

“We are disappointed that we didn’t get our rematch with Brossart and we feel for their program,” said Hopkins.

Despite all of the Covid issues surrounding their program, the Coach knows that Williamsburg will be a tough team to beat and his team must come ready to play.

“They are a really good football team and will be good for a few years since they are young. We know we have a challenge ahead of us but are excited to be playing.”

Just like Nicholas, Williamsburg didn’t dodge Covid-19 either after playing only 7 games (4 games in 42 days) leading up to their second straight region championship game, where they lost a 36-34 thriller to Paintsville a year ago in this round.

Bowen’s main receiver will be Gavon Thomas, the 2020 District 8 Class A Player of the Year. The senior has caught 37 passes for 849 yards and 13 touchdowns, averaging 121 receiving yards per game.

On defense, according to their team’s KHSAA stats, their leading tackler is junior linebacker Chris Howard. The Jackets defense has intercepted 8 passes with 3 coming from sophomore Cade Hatcher and 2 each by juniors Colin Powers and Javon Powell.

Jerry Herron is the head Coach of the Yellow Jackets, guiding them to back-to-back appearances in the Class A State Championship game in 2013 and 2014, losing a 28-27 heartbreaker to Mayfield in the 2014 title game. Herron, in his 15th season with the Williamsburg program, was named the 2020 District 8 Class A Coach of the Year.

“This season has been like no other in my career,” the Coach said through email. “We have had four games cancelled on us this season and playing just our 8th game in the Regional finals. But these young men have improved a lot this season on and off the field.”

“Coach Hopkins does a great job and has a coachable team that is very disciplined and makes few mistakes.”

The Bluejackets will be led by a strong senior class, along with several outstanding underclassmen.

Senior scatback Seth Tincher heads the Bluejackets’ rushing attack, picking up 657 yards on 97 carries, while scoring 9 rushing touchdowns. In addition, look for senior workhorse Spencer Neace to provide a punch running the ball as well. He rushed the pigskin 63 times for 463 yards and 9 touchdowns. 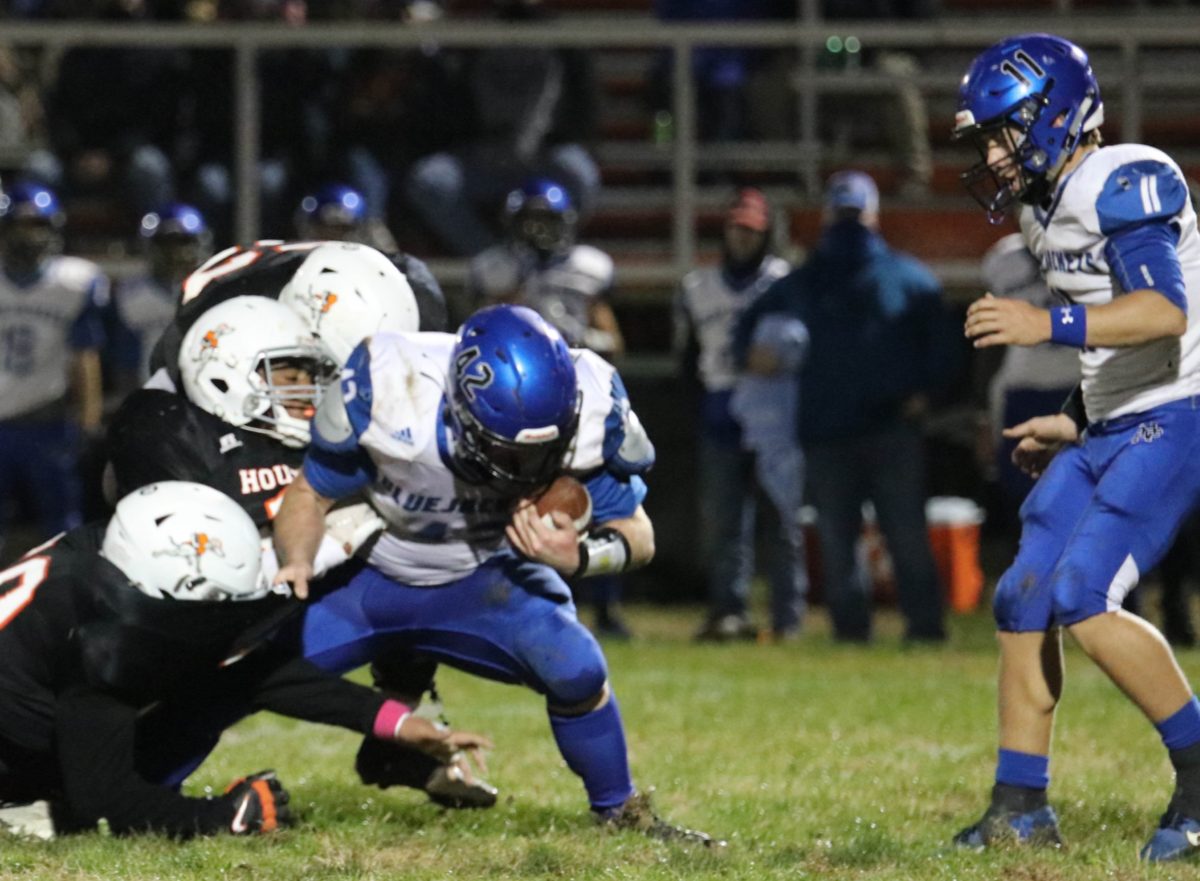 TRYING TO BREAK FREE – Nicholas County’s senior fullback Spencer Neace tries to break loose from two Paris Greyhound tacklers during their regular season matchup that was played at Blanton Collier Stadium on Halloween Eve. At the time, it would be the Bluejackets’ first game in nearly a month.  JENNIFER ARNETT I Photo Credit

On defense, junior Viston Hudson is the team’s top tackler with 52 total hits. Behind him is Tincher with 48, senior Landry Gray 35, Switzer 30, senior Ethan Adams 24, and junior Andrew Watkins 23.

As a team, the Jackets have recovered 13 fumbles (3 by freshman Carter Fryman) and intercepted 10 passes, with 4 picks coming from Switzer.

When talking about his senior group, who became the first senior football class at Nicholas to advance to consecutive region title games, Coach Hopkins had this to say.

“They have come a long way from their freshman year and they have worked extremely hard and they have made memories that will last a lifetime.”

Obviously, the senior class would like to make more memories by advancing to the program’s first state semifinal game. With defending state champion Pikeville losing last week to Hazard, it opened the door for many teams in Class A, including Nicholas County, who would’ve charted the long bus ride on Mountain Parkway, instead of making the road trip down 1-75.

Regardless of where they are headed, the Bluejackets are happy to still be playing football as they set their sights on a victory at Williamsburg.

Take it away Coach Hopkins.

“Pray for a winter mix and a wet track for their speed and let us mules Waller in the mud.” 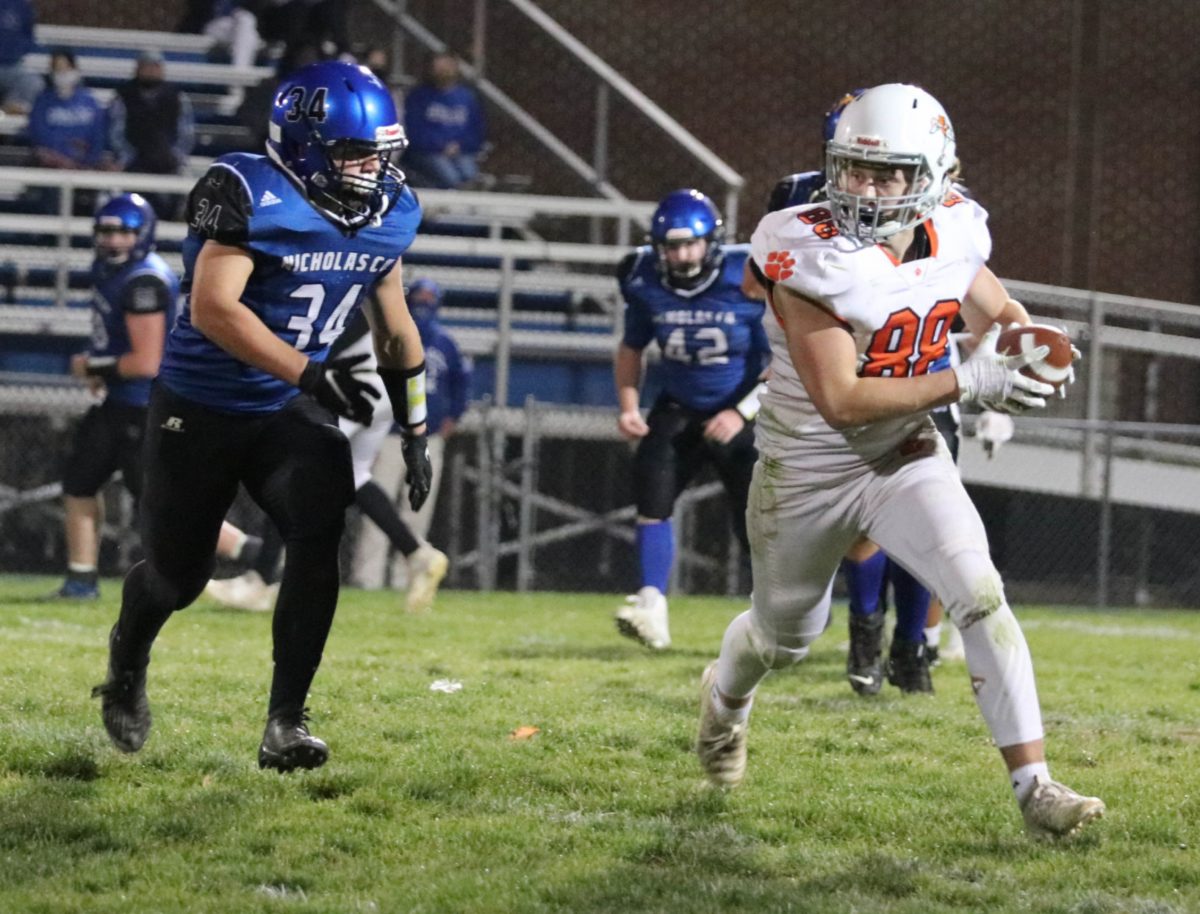 LOOKING TO MAKE THE STOP – Bluejackets freshman Carter Fryman moved in on Paris receiver Gabriel Arnett during their playoff game that was played in Carlisle two weeks ago. Nicholas’ past two out of three games that they’ve played over the last two months have come against Paris. JENNIFER ARNETT I Photo Credit

Forecast tonight in Williamsburg … 80% chance of rain and 44 degrees.

The last time these two teams met was during the 2010 Class 1A playoffs, with Coach Herron’s Yellow Jackets rolling over Coach Hopkins’ Bluejackets 54-20 in a game that was played at Williamsburg.