The Doctor Predicts Who Will Be This Year’s

LEXINGTON, KY – The road to Kroger Field is finally here as 12 teams punched their ticket to the 2020 UK Orthopaedics/KHSAA Commonwealth Gridiron Bowl, after several shockers and near upsets highlighted last week’s state semifinal action in all six classes.

Missing in this year’s field or two juggernauts in 8-time state champion Belfry, along with Johnson Central, who played in the last five 4A state title games.

Returning to the finals, however, are tradition rich Trinity, Male, Bowling Green, Boyle County and Beechwood, as well as Owensboro, who will have a Paris connection on their sideline.

Jeff Reese, a former football player, coach, and manager for the Paris Greyhounds when his dad Randy Reese coached the Hounds back in the 80’s and late 90’s, has been an Assistant Coach on the Owensboro Red Devils coaching staff for the past 15 years. Owensboro, after racing out to a 21-0 lead, held on to oust last season’s 5A state runner-up Frederick Douglass 28-27.

Reese, who was part of two state championship teams at Paris that won 38 games in a row, is now in his second state title game with Owensboro.

“Our kids played with tremendous heart. There were so many unnoticed big plays by so many guys,” said Coach Reese, after the Red Devils avenged last season’s loss to Douglass in the semifinal round. “Our defensive coaches did a masterful job of slowing down an uber-talented offense and I’m really proud of our offensive line, who faced as tough a challenge as you’re going to find. They battled toe-to-toe for 48 minutes and Coach Houston did a masterful job getting them prepared.”

Reese went on to add that if there was any question about whether Gavin Wimsatt, Owensboro’s dual-threat quarterback that’s been recruited by many big time D-1 colleges was worthy of all the hype, well, he left no doubt against arguably one of the best teams in the state.

“He put us on his back and willed us to a win against one of the more talented teams I’ve seen in 28 years of coaching.”

Owensboro will face six-time state champion Bowling Green Saturday afternoon at 3:00 for the 5A State Title.

Below is a look at the Doctor of Sports’ predictions on who he feels will be your next state champion in all six classes.

On a side note, the Doctor predicted 8 of the 12 games played last week correctly.

Kentucky Country Day Bearcats (10-1) vs. Paintsville Tigers (9-2) – Someone will win their school’s first state football title when these two teams kickoff the state finals tomorrow morning. Paintsville has reached the finals three times, including last season’s 43-0 loss at the hands of Pikeville. This is KCD’s first appearance in the title game.

Lexington Christian Academy Eagles (10-1) vs. Beechwood Tigers (9-2) – The last time these two teams played each other for a state championship, it was back in 2007 when both were playing in Class A.

Beechwood, a 14-time state champion, won that contest 38-35. This LCA team, however, is better than that LCA team and after the Tigers struggled to get past West Carter last week, I think they will have all types of problems stopping Coach Doug Charles’ Eagles.

Ashland’s semifinal victory over 7-time state champion Belfry, the defending champs, really stood out, but the Panthers are undefeated for a reason. This should be a dandy of a football game.

Boyle County Rebels (10-0) vs. Franklin County Flyers (9-1) – This matchup will have an 8-time state champion going up against a team that will be making their first appearance in a state title game. Obviously, the Rebels knows what it takes to a win a state title and would love to erase last year’s heartbreaking 21-20 title game loss to Johnson Central. However, to do that, they must beat a team that has earned some respect throughout this year’s playoffs.

Franklin County blast Louisville Central at Central and then surprisingly, took out last year’s state champ Johnson Central in the mountains. Yes, the Flyers are battled tested and they will not fear the Rebels. I’ve seen Boyle in person and they’re really good, but on paper, so are the Flyers. This one will be too close to call. 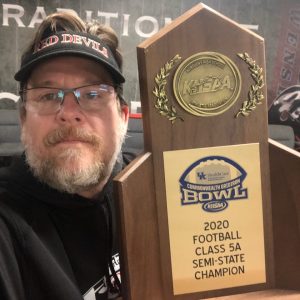 Owensboro Red Devils (12-0) vs. Bowling Green Purples (9-2) – Both teams have faced some awfully good competition throughout the shortened season and both teams eliminated the two teams (Douglass and Covington Catholic) that played in last season’s 5A title game. The Purples are no strangers when it comes to winning state titles with 6 on their resume with their last coming in 2016. The Red Devils have played in 5 state title games, winning it all in 1986 while in 3A.

Can Owensboro’s future Mr. Football candidate Gavin Wimsatt, just a junior, be the difference? And who was better, Frederick Douglass or Covington Catholic? We’ll find out soon.

For the sixth time, Trinity and Male will play each other for a state championship. The Shamrocks beat the Bulldogs in the final last season 28-6 but Male won the title in 2018 but not against Trinity.

These two teams are also responsible for what many call today the best state championship game ever played when Trinity beat Male in a shootout at old Cardinal Stadium 59-56 to win the 2002 state 4A title.

Trinity is really good and they’re the best team in the entire state after giving up just six touchdowns all season, with two of those scores coming from Male, who lost to Trinity 43-14 during the regular season.

The Shamrocks, winners of a state-record 26 championships, have won 9 of the 13 6A state title games played, while Male has won 2 6A titles and 8 overall.