Both Teams Played Saline And CCHE

MILLERSBURG, KY – After a pause to their season because of the Coronavirus Pandemic and orders of the Governor, the BCA Lions finally returned to the basketball court last week to play two games. Prior to the stoppage of play, the Lions last took the court back on November 19.

On January the 12th, BCA traveled to Somerset to take on the Saline Saints and although they have been off for a while, it didn’t show against the Saints as the team from Millersburg was clicking on all cylinders. 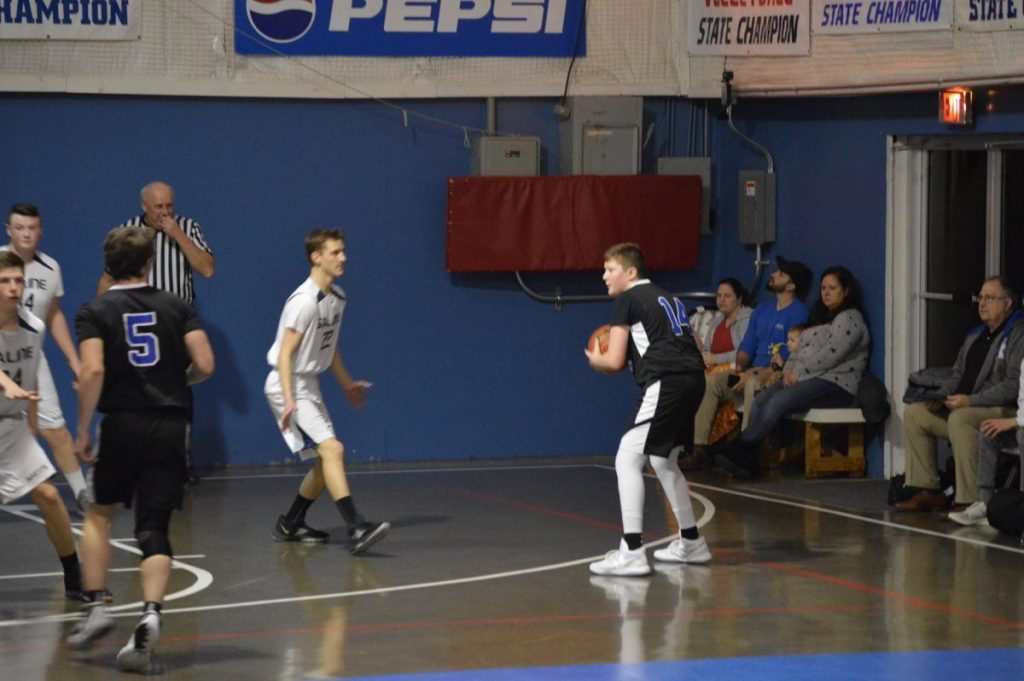 BIG NIGHT FOR COLTON – BCA’s Colton Debruler (#14), just a seventh grader, looked for an open teammate during the Lions’ win over the host Saline Saints. Debruler finished his night with 14 points that saw him hit four three-point field goals. GLENDA STANFIELD I For BCA Sports

The Lions started off scoring at will by taking a 25-7 first quarter lead and then increased their margin to 54-11 at the break. The third quarter saw BCA start Warren Slattery and Colton DeBruler, who are on the 14U team. Regardless, BCA still outscored the Saints in the second half 33 -17 to win going away 87-28.

The Lions were led by Tanner Crawford with 18 points and 13 boards. Colton Debruler, just 13 years of age, was red hot and finished with 14 points, going 4 for 7 from behind the three-point line. Others scoring saw JD Taylor with 12 points, Waylon Martin 9, W. Slattery 8, Montana Stanfield 7, Kyle Claypool 6, Oliver Slattery 6, and Sam Pendleton with 3 points. Brett Willoughby finished with 4 points and 11 rebounds.

Also on the evening, the BCA Lady Lions Volleyball team lost 2 out of 3 to the Saints.

Back on January 15th, BCA again traveled to Somerset but this time they would take on the top ranked Cumberland Christian Home Educators for the second time this season after they met back in November in Millersburg before the shutdown.

That showdown saw BCA play the Hawks close before fading down the stretch. This time around, CCHE showed the Lions why they are the two-time defending Christian Schools State Champion.

The first quarter was a good battle with BCA jumping out to a 16-11 first quarter lead. In the second frame, the Hawks found their offense and outscored BCA 16-7 to take a 27-24 lead at the break. The second half is where the wheels fell off for the Lions.

LETTING IT FLY – BCA junior guard JD Taylor pulls up for this jumper over a CCHE defender. Taylor finished his night with a team-high 14 points. GLENDA STANFIELD I For BCA Sports

CCHE outscored BCA 40-25 over the final two quarters to take a close game and blow it wide open as they pulled away for the 67-48 victory.

Leading the Lions was JD Taylor with 14 points, while Tanner Crawford added 10. Oliver Slattery had 9 points and 10 boards. Sam Pendleton scored 7 points before fouling out, Brett Willoughby came off the bench to chip in 6 points and 6 rebounds. Waylon Martin finished with 2 points and 5 assists. Montana Stanfield and Kyle Claypool also played but failed to score.

The loss dropped the Lions’ record to 2-2 on the season.

The 14U Lions also struggled with the Hawks losing the same night, but the JV and Varsity girls’ volleyball teams won their games against the Hawks.