Will Have Their Rematch Against Paris Tonight

Inside Earl E. Redwine Gymnasium At 7:30

PARIS, KY – Coach Bill Watson’s Lady Colonels snapped a three-game losing streak on Saturday afternoon when they put together a furious second half rally to take down visiting Madison Central in a game that was scheduled just 20 hours before it was played. Bourbon was all set to travel to Madison County to face Berea on Saturday but because of Covid, the Lady Pirates had to cancel the game, leaving Coach Watson (again) scrambling to find a game for his team. 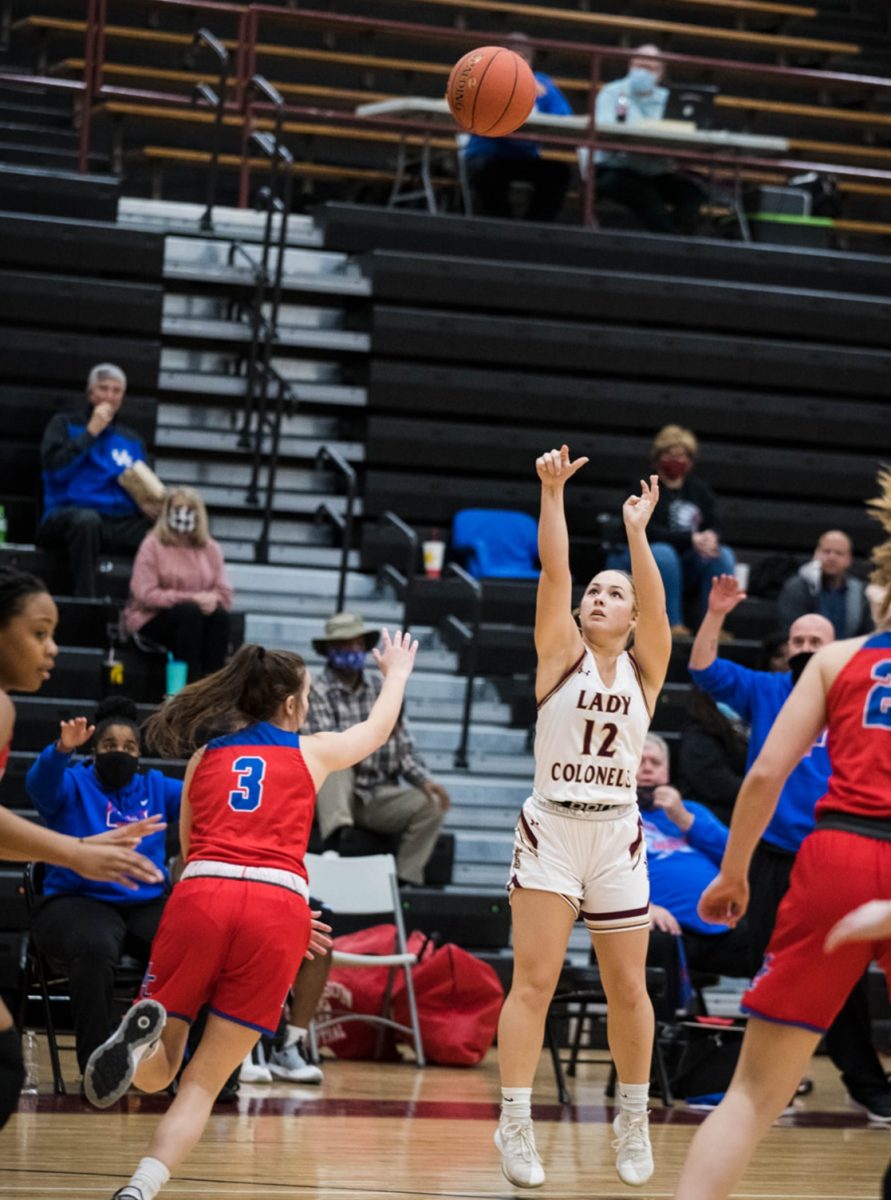 Bourbon, after having a few games canceled because of the snow, lost to Campbell County before bouncing back two days later for the win over the visiting Lady Indians to complete their shortened two game week.

Tonight, Watson’s team (6-7, 0-3) will make the short trip crosstown to take on the Ladyhounds (9-3, 3-1), who won the first meeting between the two 55-44 inside Russ Day Gymnasium back on February 9th. They will then return to their home gym for their next three games this week when they take on Bath County (tomorrow might) where they will honor their four seniors. Madison Southern will come to town on Thursday and Spencer County will be here on Friday night.

Bourbon County trailed the Lady Indians 29-24 at the break but whatever Coach Watson said to his team during halftime worked, because they returned from the locker room to outscore Madison Central 36-13 in the second half to pull away with the 18 point victory.

The Lady Indians jumped out to a 7-4 lead before the Lady Colonels moved in front 9-7 on a lay-up by senior McLain Murphy at the 4:04 mark of the opening quarter. Both teams would go on to double their production over the final four minutes, leaving Bourbon in front 19-14. Senior guard Lyndsay Johnson led Bourbon over the first eight minutes with 10 points, while freshman guard Bailey Hensley led the Lady Indians (7-8) with 11 points.

After shooting the ball well in the opening frame, Watson’s team did the opposite in the second quarter when they failed to hit a field goal, missing all 10 of their attempts, although they did manage to hit 5 of their 8 free throw shots.

Central, behind Hensley, who finished the first half with 17 points, outscored the cold shooting Colonels 15-5 during the period to grab a 29-24 halftime lead. 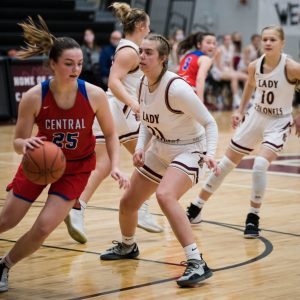 LOOKING TO CUT HER OFF – Madison Central freshman Bailey Hensley, who led all scorers with 26 points, tried her best to get around the defensive pressure of Bourbon’s senior McLain Murphy. KRISTA BARNETT I For BCHS Sports

The third quarter saw Bourbon find their range again after they connected on 8 of their 11 field goal attempts, including made three-point field goals from Murphy and freshman Laiken Hardin.

A three from Hensley, who wreaked havoc against the Colonels all afternoon long, moved MC’s lead out to 34-28 with 6:11 remaining in the third.

Murphy’s three and Johnson’s jumper got things started for the home team as they closed the period on a 14-2, helping their team to a 42-36 lead going into the fourth quarter, where they continued their hot shooting and stifling defense to pretty much shutdown Hensley and the Central offense as they won the final frame 18-6 to pull out the 60-42 win.

ALEXANDRIA, KY – The Bourbon County Lady Colonels made the road trip up North last Friday night to face the Lady Camels of Campbell County, who eliminated the Colonels from the region tournament a year ago. 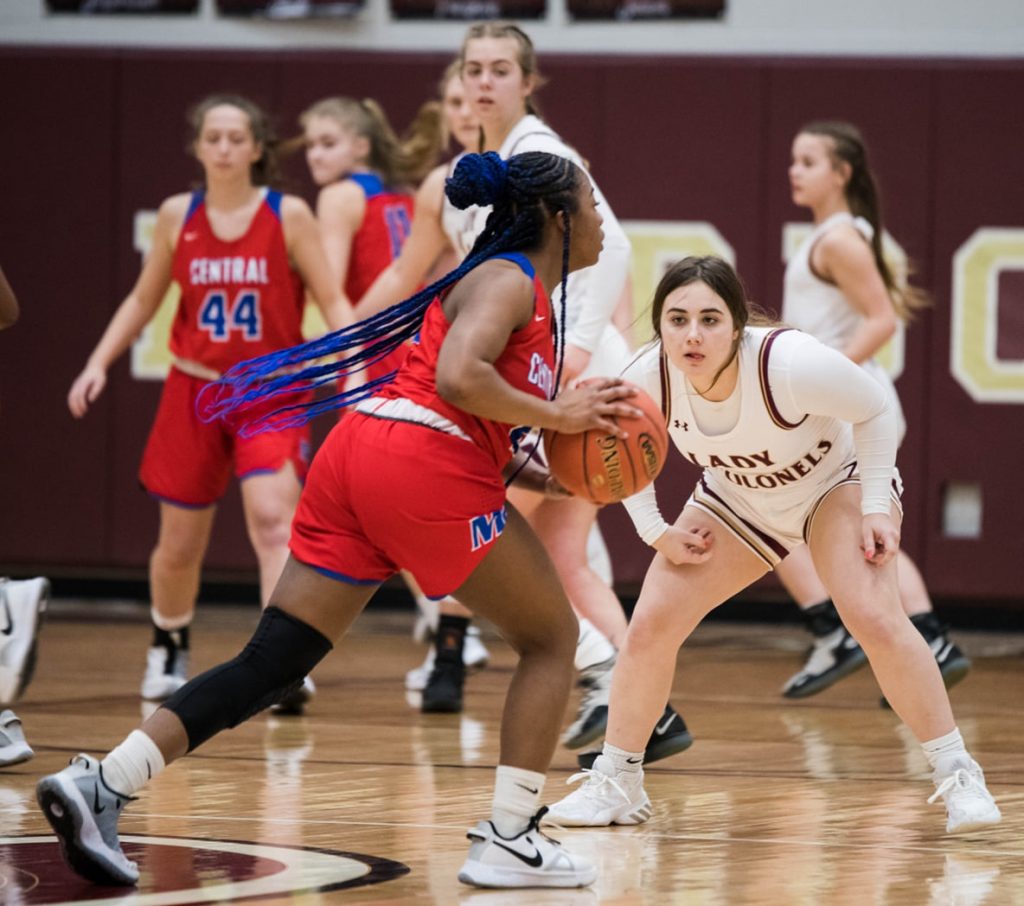 LOCKED IN – Senior Jaycee Goodwin kept a close eye on Central’s Eve Carter just before she would make her move towards the basket. KRISTA BARNETT I For BCHS Sports

Bourbon got off to a great start by leading the host team 16-11 after the first quarter but the Camels, behind all-region guard Kylie Koeninger and senior Emma Taylor, outscored Coach Watson’s squad 15-9 in the second frame to pull ahead at the break 26-25.

The third quarter saw both teams battle to the closing seconds of the frame before the Camels did just enough to extend their lead to 44-39 heading into the final eight minutes.

Bourbon, who had their chances to win the game but poor free throw shooting that saw them make only 10 of their 23 attempts, allowed the Lady Camels (6-9) to cruise home for the 69-59 victory. Campbell, actually won the game from line after they made 30 of their 39 attempts, outscoring the Lady Colonels by 20 points at the charity stripe.

Johnson paced the Lady Colonels with 19 points, 3 rebounds and 4 assists. Shorty Goodwin followed with 17 points, 5 rebounds, 5 assists and 2 steals. Also reaching double figures was Hamelback who added 12 points and 7 rebounds. Murphy finished with 5 points and a team-high 8 rebounds. Rounding out their scoring saw Hardin and Baker with 3 points each. 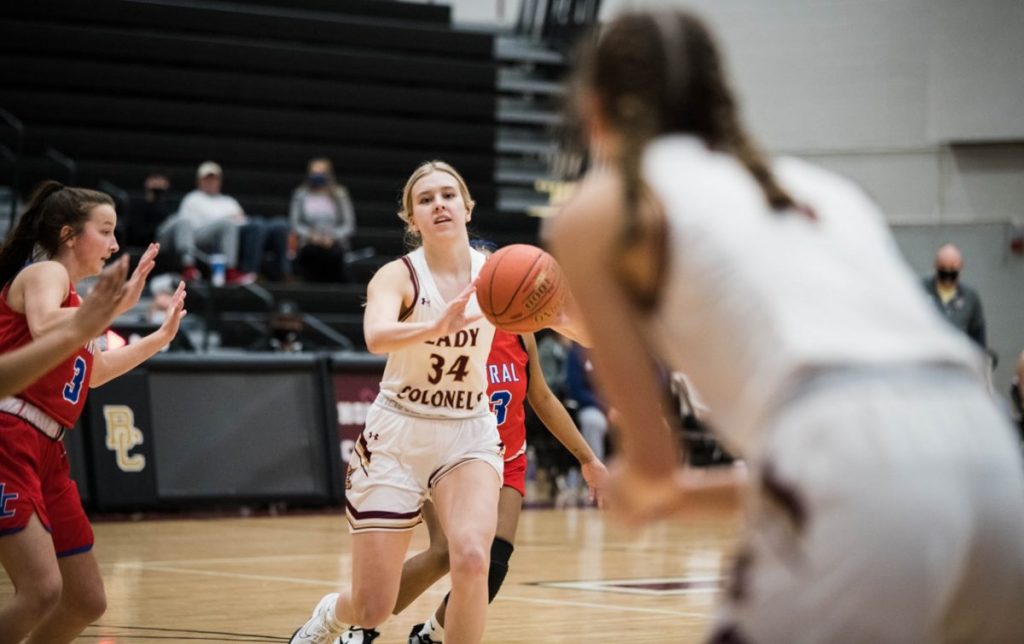 DISHING OFF THE ROCK – Lady Colonel senior Lyndsay Johnson, who paced her team with 17 points and 3 assists, released the basketball in the direction of freshman teammate Laiken Hardin during their team’s 60-42 victory over Madison Central Saturday afternoon. During their loss at Campbell County last Friday night, Johnson again led her team with 19 points, 3 rebounds, 4 assists and 2 steals.  KRISTA BARNETT I For BCHS Sports