PARIS, KY – Coach Aaron Speaks’ Paris Ladyhound basketball team capped off a nice week by winning two games inside Earl Redwine Gymnasium this past weekend when they had to rally back to hold off a young and incredibly talented Montgomery County team on Friday night and then in easy fashion, blew past visiting Louisville Ballard on Saturday afternoon to improve their record to 9-3 on the season. 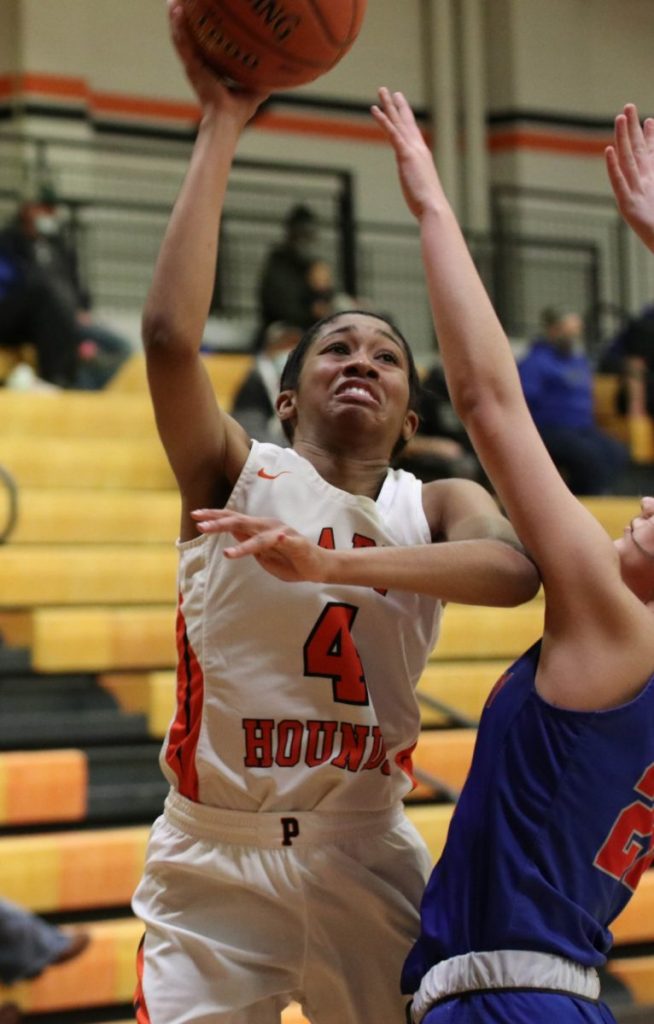 STRINGS GOING UP – Ladyhound senior Zoe Strings tried to get some separation between her and Montgomery County defender Hayden Barrier as she made her way to the basket to score two of her game-high 22 points during Paris’ district win over the Lady Indians. JENNIFER ARNETT I For PHS Athletics

Paris will now set their sights on a key district game tonight inside Redwine Gym when Coach Bill Watson’s Bourbon County Lady Colonels make the trip crosstown. Paris won the first meeting between the two just two weeks ago thanks to junior center Nia Kenney’s career-night that saw her finish that evening with 15 points and 17 rebounds, giving the Ladyhounds their first victory inside Russ Day Gymnasium in 11 years. Game time is set for 7:30.

Scoring their most points in a game since December 7th, 2019, the Paris Ladyhounds raced out to a 19-1 lead and never looked back as they rolled past the visiting Bruins of Ballard 74-30 on Saturday afternoon in Paris.

Ballard’s first field goal of the game came at the 5:50 mark of the second frame when senior guard Makayla May nailed a three that helped the Bruins start the second period with a 7-0 run.

How did the Ladyhounds respond after Ballard closed the margin to 21-10? Knocking down the three ball.

Back, to back, to back threes from Tye, sophomore Jamie Cowan and Jackson pushed Paris’ lead out to 29-10 and from that point on, Paris continued to pour it on with some great shooting. Speaks’ team made 11 three-point goals for their most made threes in a game since 2006.

The Ladyhounds led 35-16 at the half and then extended that margin to 51-24 after three quarters of action. The fourth quarter saw both teams empty their bench but Paris still continued their hot shooting as they outscored Ballard during the final frame 23-6 to win going away.

Tye, who has been in a shooting slump, found her touch on Saturday. She was 5 for 5 from the three point line and 3 for 3 at the free throw line, as she finished her day with 20 points, 7 rebounds, 3 steals and 2 assists. 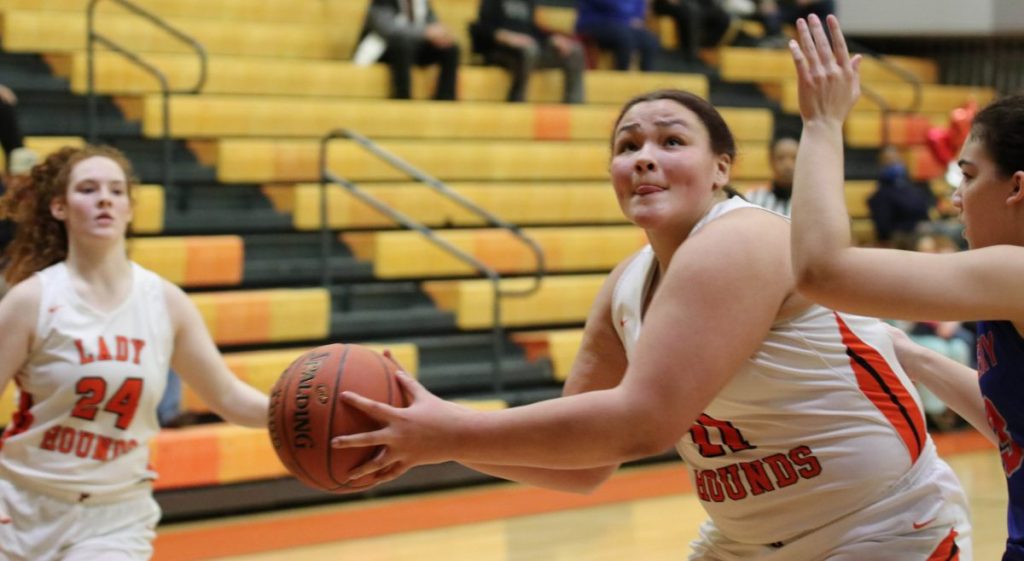 Cowan added 8 points, pulled down a game-high 11 rebounds and dished out 7 assists, with most of those heading in the direction of Tye.

Nia Kenney continued to make her presences known after she finished with 7 points and 8 rebounds. Eighth grade guard Tori Dumphord rounded out Paris’ scoring with 3 points thanks to an old fashion three-point play.

Coming into their district contest last Friday night against visiting Montgomery County, Coach Speaks knew that his team would have problems slowing down a Lady Indians team that knew how to score the basketball. With both teams playing limited amount of the games over the last month, MC one game since January 25th, and Paris 3 games since January 20th, it was Coach Dustin High’s team that started off the game as if they’ve never missed a beat.

Thanks to the scoring of sophomore Shae Harris, who finished the first with 9 points, and made threes by freshman sensation Hayden Barrier and freshman sharpshooter Allie Dillon, the Lady Indians (8-3, 1-3) put up 21 points in the opening quarter, while Paris, behind Tye and Kenney, could managed only 15 as MC led 21-15 after one. 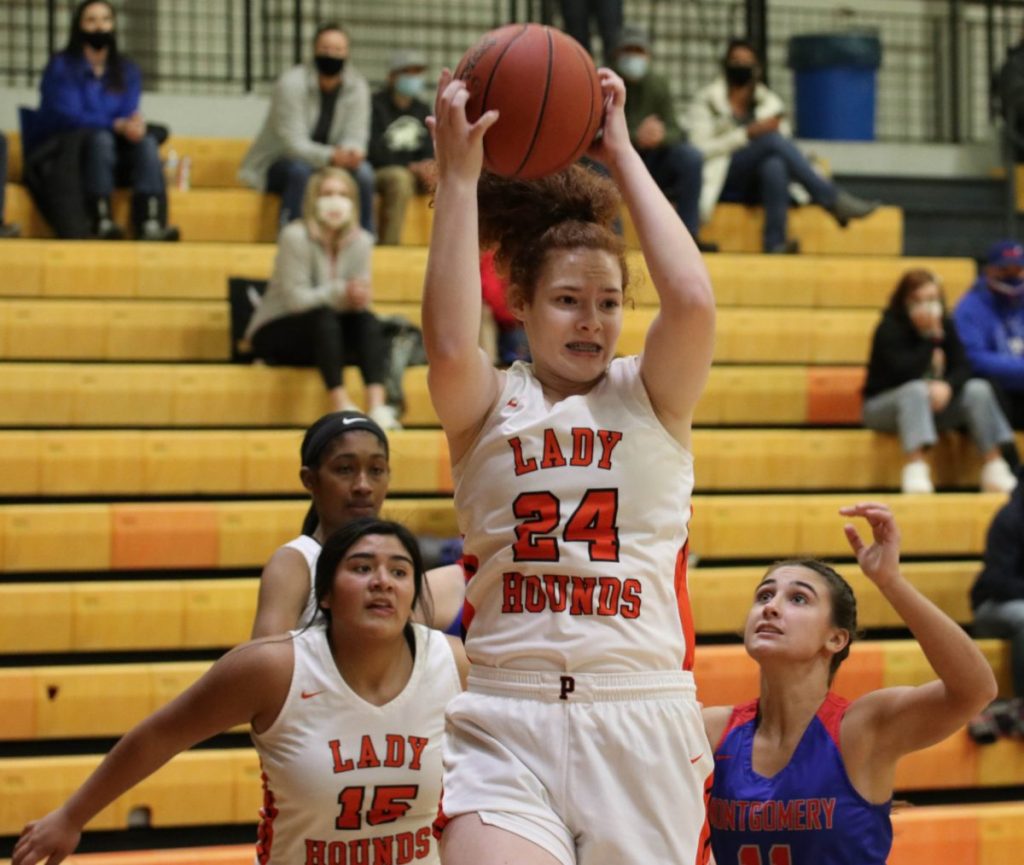 PULLING IT DOWN – Determined, Ladyhound sophomore Jamie Cowan pulled down this rebound just in front of teammate Jazmin Jackson and Montgomery’s Reaghan Oney. JENNIFER ARNETT I For PHS Athletics

Impressive numbers for High’s team, considering the 21 points were the most points given up during any quarter by Speaks’ defensive-minded team all season long.

Montgomery’s lead grew to 24-16 midway through the second quarter on consecutive made baskets by senior Kennon Owens. The Ladyhounds, who started to turn it up on defense, answered by closing the quarter on an 8-2 run with six of those points coming from Strings.

The Indians, after putting up 21 in the first frame, was held to 6 in the second frame but they still took a 27-24 halftime lead over the Ladyhounds.

Five straight points to start the third moved MC’s lead out to 32-24 just two minutes into the third.

Again, Paris, behind Strings, answered by ending the quarter on a 12-1 run that ultimately pushed them in front at 36-33 heading into the final eight minutes of regulation play.

The fourth quarter saw both teams battle back and forth as Montgomery got even with the Ladyhounds on two different occasions thanks to the scoring of Barrier and freshman Reaghan Oney. However, it was Paris that made the plays down the stretch to pull out the eight point district win.

Strings finished the fourth quarter with 9 points, including a 6 for 6 performance at the free throw line, with most of those coming within the final minutes of the game. Jackson also came up big during the period by adding 7 points that saw her knock down a three to give Speaks’ team their biggest lead of the night at 51-41 with under four minutes remaining.

Strings led Paris with 22 points, 5 steals, 3 assists and blocked 2 shots. Jackson had 12 points and 4 rebounds. Tye concluded her evening with 9 points, 4 rebounds and 4 steals. Cowan totaled 7 points and 6 rebounds. Kenney had 5 points and 3 rebounds, while Jazmin Jackson rounded out their scoring with 2 points. 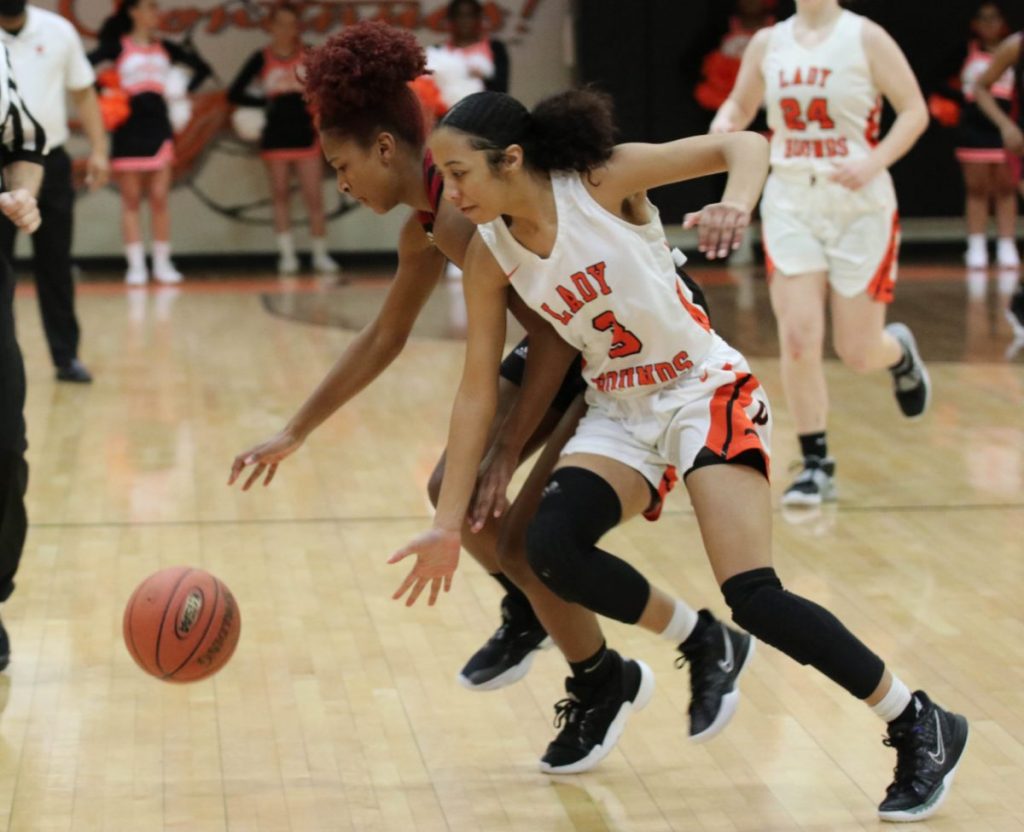 FIGHTING FOR POSSESSION OF THE ROCK – Ladyhound senior Chez Tye battled the Ballard player for the loose ball during Paris’ blowout win over the visiting Bruins that saw Tye hit five three points goals on her way to 20 points. JENNIFER ARNETT I For PHS Athletics

Harris, who had the huge first quarter, led Montgomery with 11 points and 7 rebounds. Barrier tossed in 10 points and Oney had 8. Other scoring saw Dillon with 7, Savannah Parker 6, Owens 5 and Ella Routt 2.

The Ladyhounds will travel to Nicholas County tomorrow night to face Coach Greg Letcher’s Lady Jackets (5-5) and then on Friday night, they’ll make the journey to Mt. Sterling for their rematch with Montgomery County in what could turn out to be a particularly important district game for Paris. Speaks’ team will conclude the week with a Saturday afternoon affair against Lloyd Memorial (5-11) inside Redwine Gym.