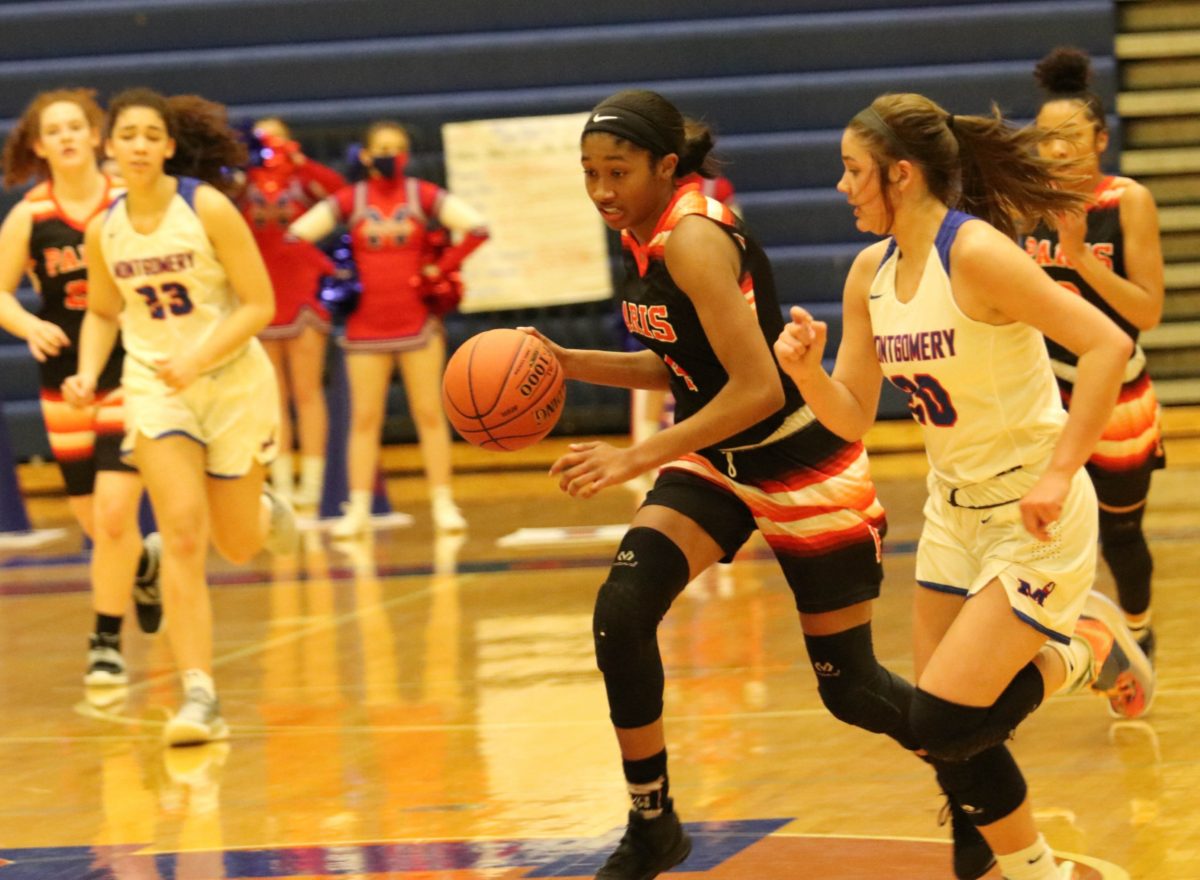 ON THE MOVE – After getting the steal, Zoe Strings took off with the basketball while Montgomery’s Hayden Barrier applied the defensive pressure. Strings led all scorers with 16 points, while Barrier paced her team with 11 points. JENNIFER ARNETT I For PHS Athletics

MT. STERLING – Going into last night’s encounter against host Montgomery County, a lot was on the line for Coach Aaron Speaks’ Ladyhounds, as well as Coach Dustin High’s Lady Indians. At stake for Paris was a chance to lock up the top seed in the upcoming 40th District tournament, which would’ve been their first since joining the 40th back in 2006, and for Montgomery County, a chance to finally stay away from rival George Rogers Clark in the opening round of the post season tournament.

Paris, who defeated Montgomery County a week ago in Paris, was hoping to pull off the regular season sweep but the up and coming (wait, they’re already here) talented Lady Indians had other ideas and they kept Speaks’ team from achieving that accomplishment.

Montgomery, using a huge first quarter run that Paris couldn’t overcome, prove to be the difference in the game as the Lady Indians, inside the MCHS Arena, took down the Ladyhounds to lock up the No.3 seed in the district, while Paris moved into the No.2 slot, setting up the ultimate matchup that will count the most next month inside Earl Redwine Gym in the semifinal round of the 40th District Tournament.

Five quick points by senior guard Zoe Strings gave the Ladyhounds the early 5-2 lead with 6:00 remaining in the opening quarter. Needleless to say, it would be Paris’ final points of the frame.

A driving lay-up from freshman guard Reaghan Oney, jumpstarted the Lady Indians on a quarter closing 13-0 run that was capped off by a made three and floater from fellow freshman Hayden Barrier, who is the daughter of former Miss Kentucky Basketball winner Beth (Vice) Barrier. 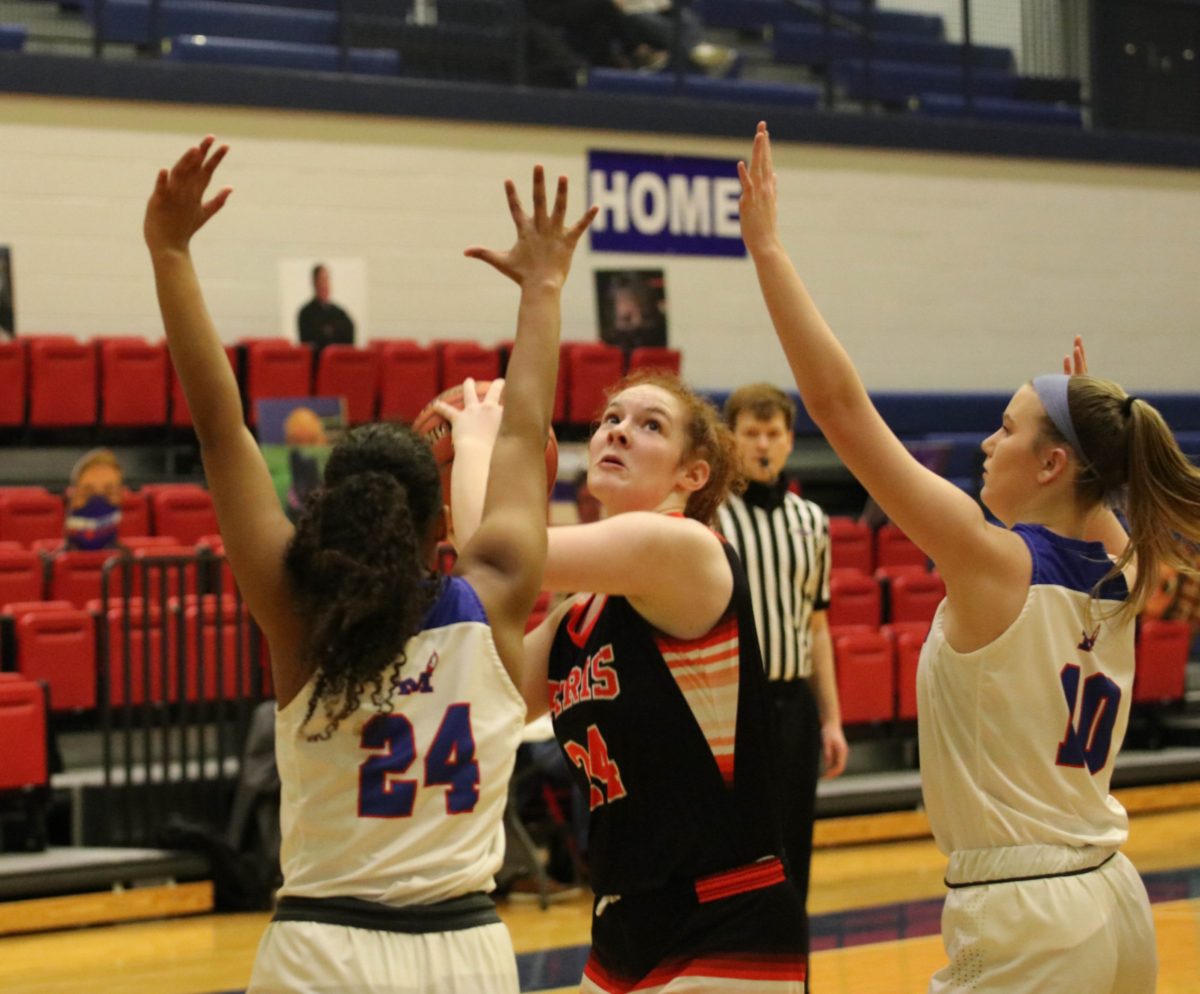 TRAPPED – Jamie Cowan tried her best to get this shot attempt off jus in front of Montgomery County’s Kennon Owens (#24) and Allie Dillon (#10). JENNIFER ARNETT I For PHS Athletics

Two free throws by Sanaa Jackson saw Paris close the deficit to 15-7 before Montgomery, behind senior Savannah Parker and Oney, responded with a 14-4 run to push their lead out to 29-11 at the 2:20 mark of the second period.

Paris managed to cut the lead back to 11 thanks to made three-point baskets from Jackson and Strings but MOCO still went into the halftime break leading 30-19.

The third quarter saw Speaks’ team make a push at the Lady Indians by closing the once 18 point margin down to six on two different occasions but Montgomery, who might’ve bent but didn’t break, stayed in control.

Back-to-back treys from Jackson and senior Chez Tye, along with a free throw by Strings saw Paris get to within 36-30. Allie Dillon’s three and Kennon Owens lay-up that was surrounded around a made three from Strings, helped MC take a 41-33 lead into the final eight minutes.

Montgomery opened the fourth with five straight points to extend their margin to 46-33. From that point on, the Ladyhounds had to play catchup but High’s team made sure they didn’t catch up by making the plays they needed to make, including four straight free throws down the stretch by sophomore Ella Routt, to pull out the 13 point win.

Barrier, despite getting into early foul trouble, paced the Lady Indians with 11 points. Shae Harris and Parker totaled 10 points each and Oney, who pretty much “owned” Paris all game long, scored 8 points. Rounding out their scoring saw Owens with 6, Dillion 5 and Routt 4. 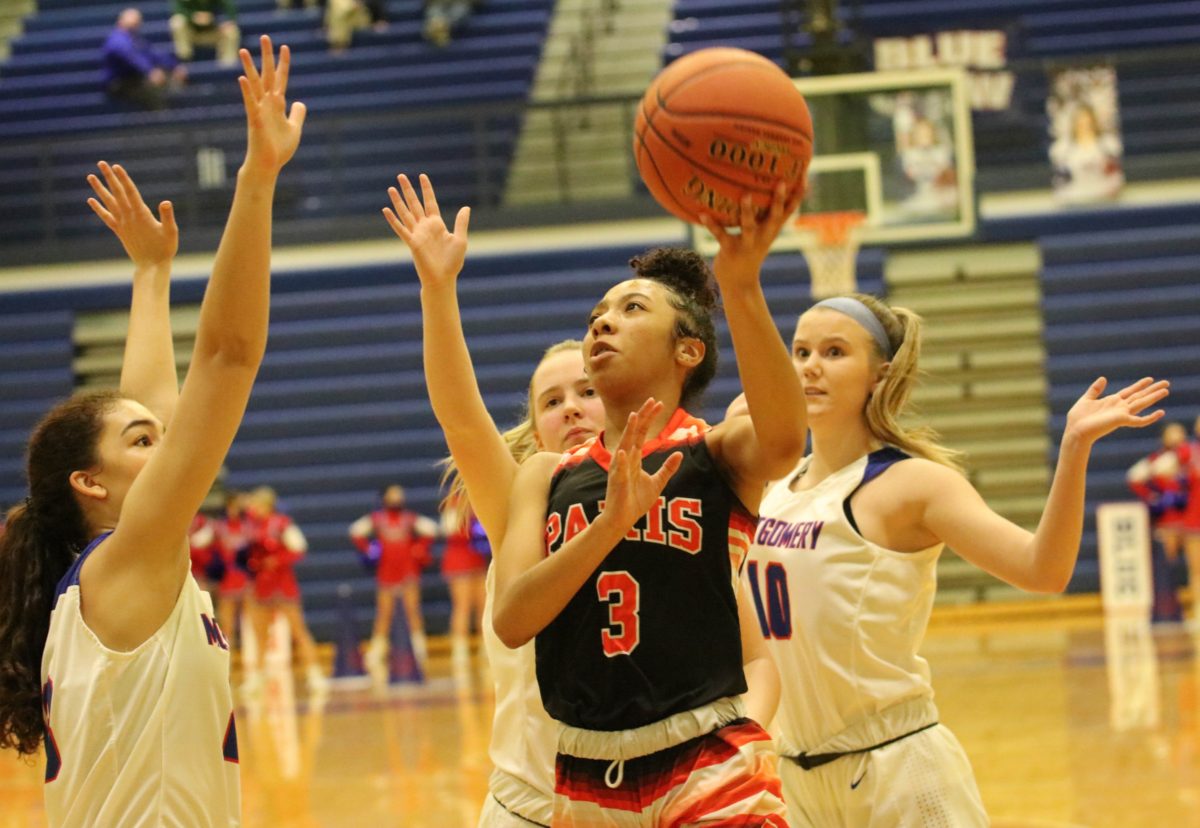 DRAWING SOME TRAFFIC – Ladyhound senior guard Chez Tye goes up for this lay-up attempt despite being pressured by three Montgomery County defenders. JENNIFER ARNETT I For PHS Athletics