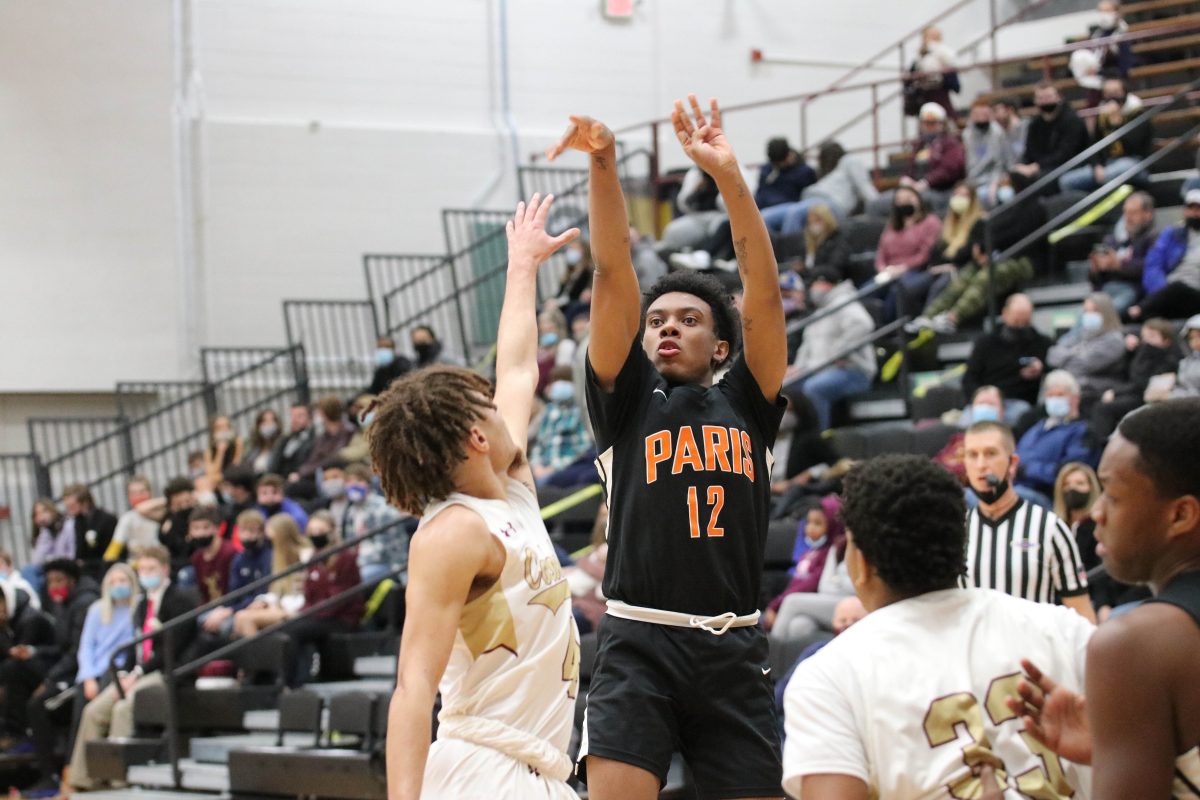 SHOOTER IN MOTION – Ricqiece Washington got this shot off just in front of Bourbon’s Jeremiah Jones during their meeting inside Russ Day Gym last week. Last night against Bracken County, Washington hit 11 of his 20 field goal attempts including a 3 for 6 performance behind the three-point line. JENNIFER ARNETT I For PHS Athletics

BROOKSVILLE, KY – One can most certainly say that it’s been a very tough shooting year for Greyhound senior guard Ricqiece Washington, the lone holdover, with the exception of Jakari Ransom, from last season’s Greyhound team that did see a lot of action.

Last night in Brooksville, Washington found his shooting touch and in doing so, he helped Coach George Baker’s team end an 8-game losing streak, while avenging an earlier season 21-point loss to the Bracken County Polar Bears in the opening round of the All “A” Classic 10th Region Tournament that saw the Bears lead the Hounds by as much as 36 points on that evening back in January.

The win, Paris’ second of the season, will now give them a little momentum heading into tonight’s clash against cross-town rival Bourbon County (3-11, 1-3) inside Earl Redwine Gymnasium. The two teams met last Friday evening at Bourbon with Coach Lamont Campbell’s team, behind the effort of senior forward Parker Estes, pulled out the 81-64 victory. The Colonels will come into the contest with three straight losses, including losing 8 of their last 9 games with their only win coming against the Greyhounds. The Colonels, thanks to five-straight wins over their rival, lead the overall series 95-90. Bourbon once led the series 90-76, before Paris won 14 straight to get even. Game time is set for 7:30.

The Greyhounds jumped out of the starting blocks quick to race out to a 23-11 first quarter lead, as Washington scored 13 of his 31 in the frame that included making three three-point goals.

The Hounds increased their margin to as much as 29-12 in the second quarter thanks to the shooting of seventh grader Malachi Ashford, who knocked down two treys. The Polar Bears did regroup to close out the half by outscoring Paris 15-9 to trail going into the halftime break 38-27. 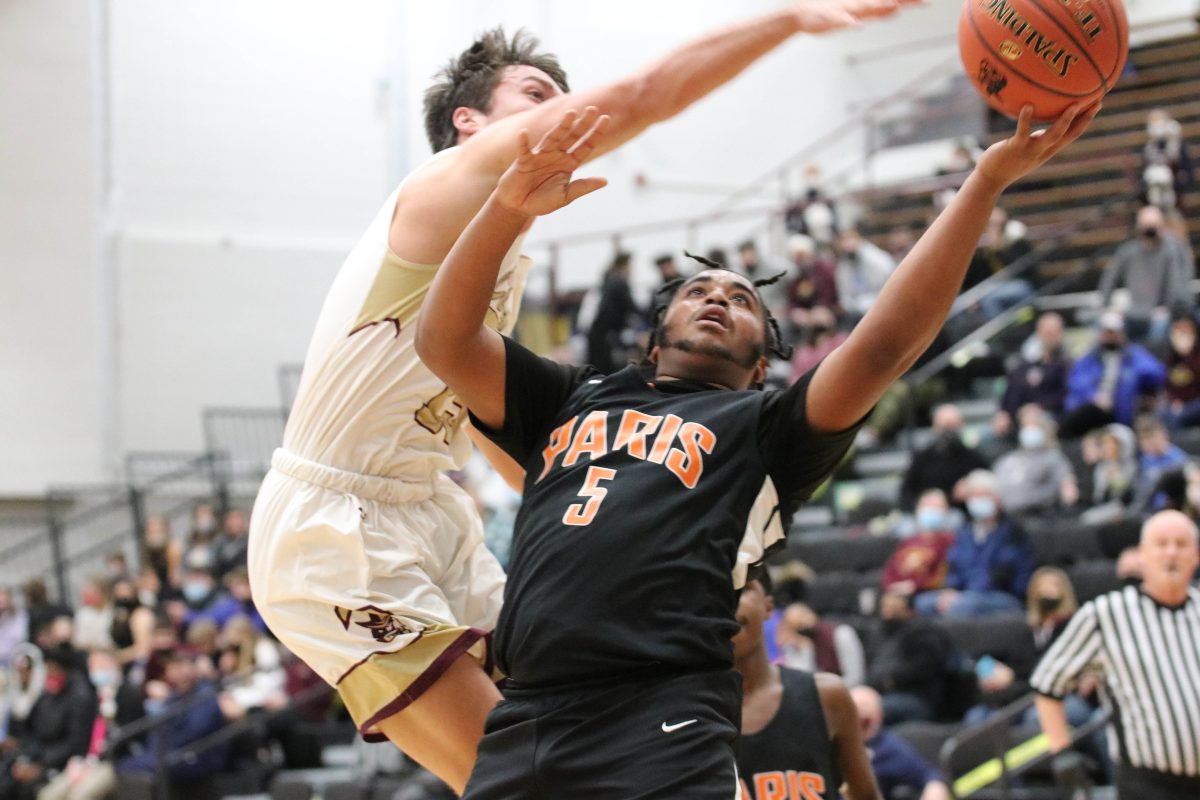 DEFENDING HIS BASKET – Jakari Ransom, shown here trying to get off this off-balanced shot over Bourbon County senior Parker Estes, had 12 points, 6 rebounds and 3 steals during Paris’ win over Bracken County last night. For the Hounds to defeat Estes, who dominated the Greyhounds the last time around, and the Colonels, Ransom and his teammates must duplicate their performance from yesterday evening in Brooksville. JENNIFER ARNETT I For PHS Athletics

Baker’s team kept up the pressure and the scoring when juniors Kentarrion Downey and Walker Spaulding got in on the act to combined for 10 of the Hounds’ 20 third quarter points that helped them stay in front of the host team 58-47 after three quarters of action.

During that third frame, junior guard Cameron Lilly’s made three and Washington’s five-points, helped Paris push their margin back to 11 after the Bears closed the gap to six. Freshman guard Blake Reed, who was held to just two points in the first half, finished the quarter with 12 points on four made three-point baskets.

The fourth and final frame belonged to Washington and Ransom, as well as the strong free throw shooting of Lilly, while Reed did his best to keep his team within striking distance of the incredibly determined Greyhounds.

Bracken (6-16) losers of six in a row and 9 of their last 10, closed the margin to one midway through the quarter but Baker’s team didn’t fold to the mounting pressure and eventually, behind some lights out shooting from the free throw line that saw them hit 10 of their 11 attempts, built their lead back out to as much as 13 before cruising home for the nine point win. Washington led Paris in the fourth with 10 points, Ransom had 4 and Lilly had 4.

Coach Adam Reed’s squad didn’t help their cause any after going just 6 of 14 from the charity line in the fourth. Reed, however, continued his hot shooting with 12 more points during the frame to finish with a team-high 26 points. Senior Nathan Jefferson added 12 points for the Polar Bears and 8 points each came from sophomores Garrett Reynolds and JuShod Commodore. 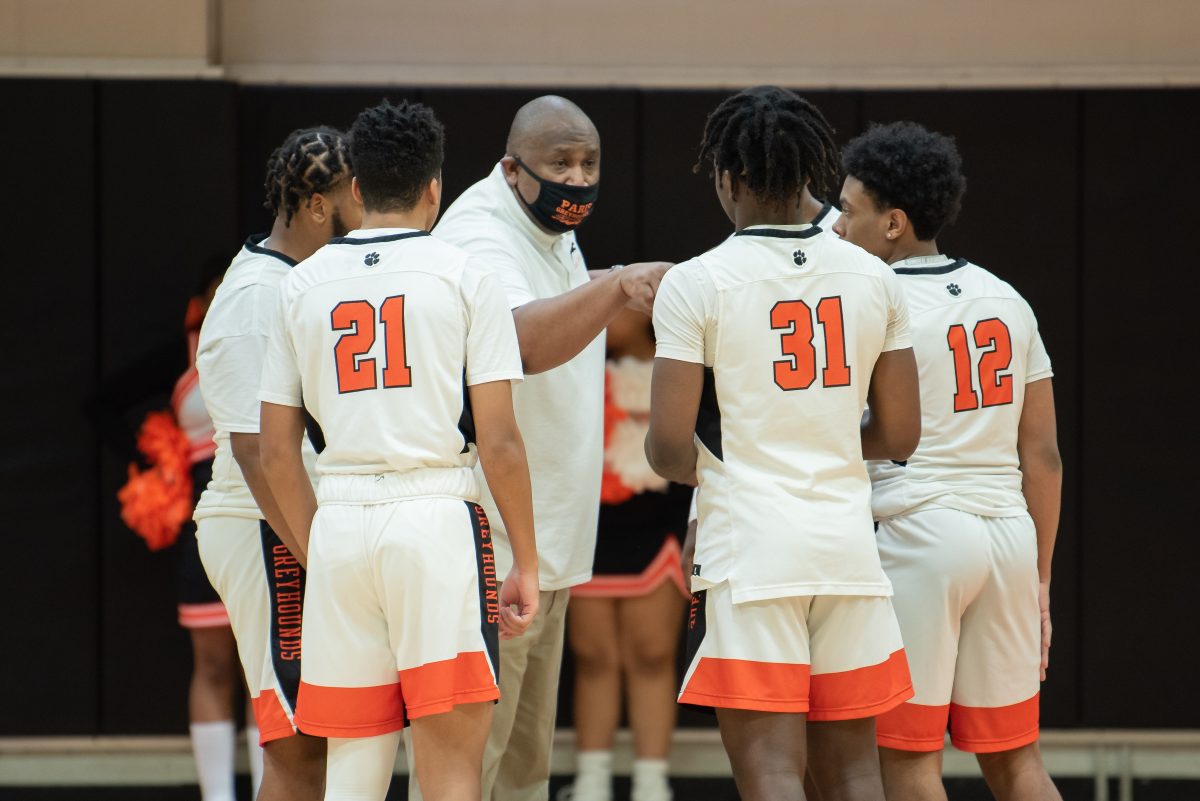 LOOK GUYS – Greyhound Coach George Baker talked things over with his team during a timeout. Baker saw his Hounds snap an 8-game losing streak last night and he’s hoping they can keep up their winning ways tonight when they play host to Bourbon County. WHITNEY GRAY I Paris Schools Media Relations

4 assists and 3 steals to go along with his 31 points. Ransom finished with 12 points, 6 rebounds and 3 steals. Downey added 11 points and 5 rebounds. Lilly had 7 points. Spaulding totaled 6 points, 5 rebounds and blocked 3 shots. Other scoring saw Ashford with 6 and  Cortayion Smith 5.

The 78 points were also the most points scored by a Greyhound team since February 7th, 2018 when they scored 81 in a win over Harrison County.