The sophomores combined for 68 points

and 37 rebounds over the two games

PARIS, KY – With the district tournament set to get underway in less than two weeks, Paris Ladyhound Coach Aaron Speaks wanted his team to face some good competition to conclude their 2020-2021 regular season before heading into post season play. And they would do just that. 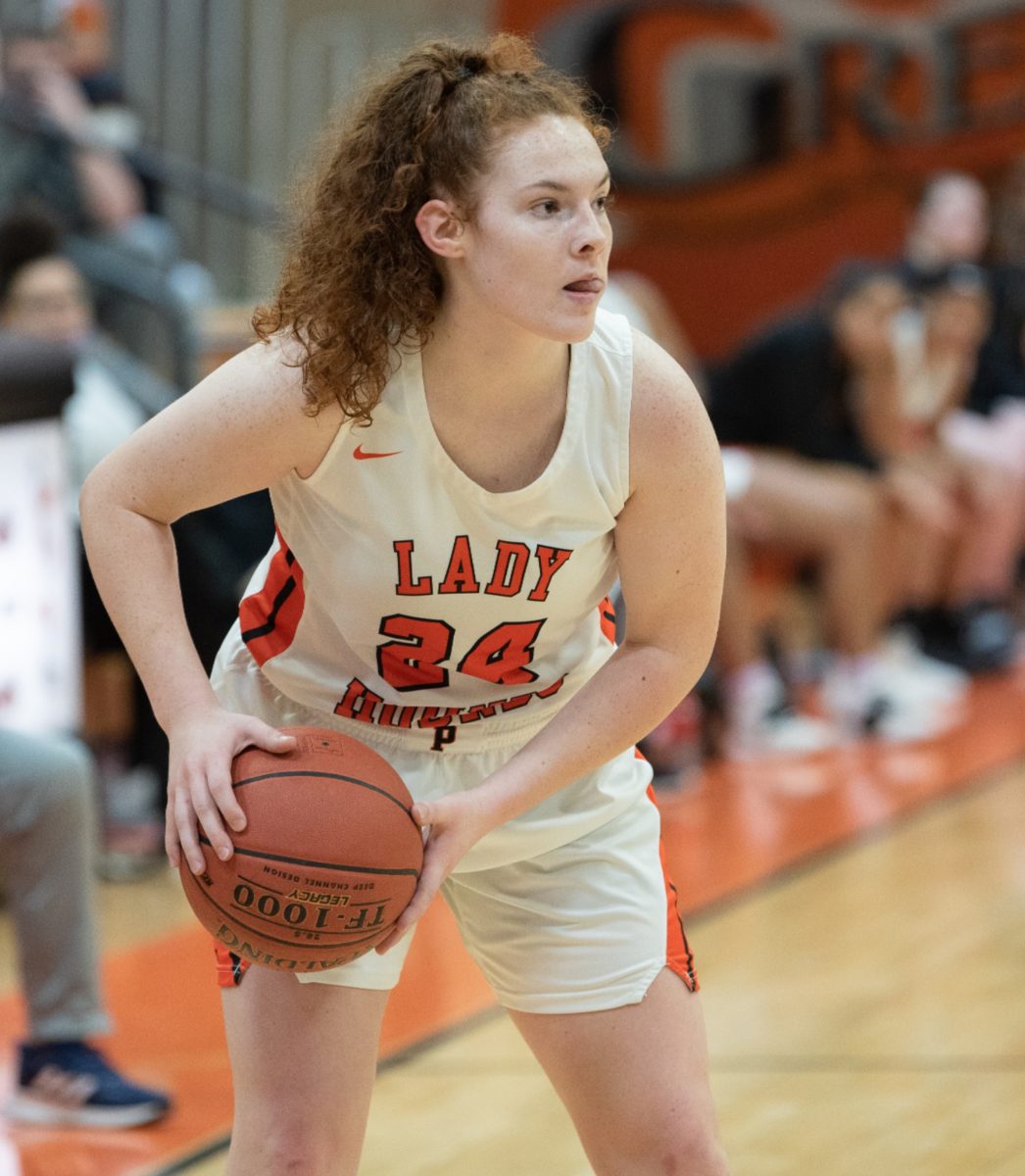 COWAN GOT BUSY – Sophomore forward Jamie Cowan two big nights had her totaling 33 points, 29 rebounds and 4 steals. She also hit 9 of her 13 free throw attempts, after coming into this week’s action shooting 46% from the line. WHITNEY GRAY WIGLESWORTH I Paris Schools Media Relations

Scott housed Miss Basketball Candidate Mya Meredith, along with University of Tampa commit Sophia Allen, although Meredith was injured and did not play, Scott was still a formidable opponent. Rowan was led by future Miss Basketball Candidate Haven Ford, a sophomore, who came into the game averaging just under 26 points per outing, as well as fellow sophomore Katie Chandler. The two combined for 51 points during their victory over the Lady Flyers.

“We wanted to try to schedule some difficult and challenging games late in the season. So with star players such as Mya, Sophia, and Haven, I knew Scott and Rowan would check the boxes for that,” Coach Speaks shared over a text message. “Unfortunately, Mya was out but Sophia and Haven were as advertised.”

Thanks to the play of sophomores Jamie Cowan and Sanaa Jackson, who both struggled earlier in the season scoring the basketball, the Ladyhounds, playing both games inside Redwine Gym, defeated Scott High on Monday night and then capped off their week with a nice win against the Lady Vikings on Wednesday evening.

The Paris Ladyhounds opened the game missing their first 13 field goal attempts, however their only saving grace is the fact that the normally hot shooting Lady Vikings, were just 2 of 10 from the field.

Trailing 7-1 late in the opening frame, Paris closed the quarter with a 6-0 run to get to within one of the Vikings at 7-6. Their first field goal came at the 1:28 mark on a made three from senior Zoe Strings. All seven of Rowan’s points came from sophomore Katie Chandler.

Speaks’ team blistered the nets in the second quarter, making 8 of their 11 attempts. The frame was highlighted by the scoring spree of Sanaa Jackson, who made five of those field goals on her way to 11 second quarter points. The Ladyhounds’ defense stepped it up a notch as they held the Vikings to just 10 points as the home team left the floor with a 26-17 halftime lead. Jamie Cowan added 7 points during Paris’ 20 point quarter. 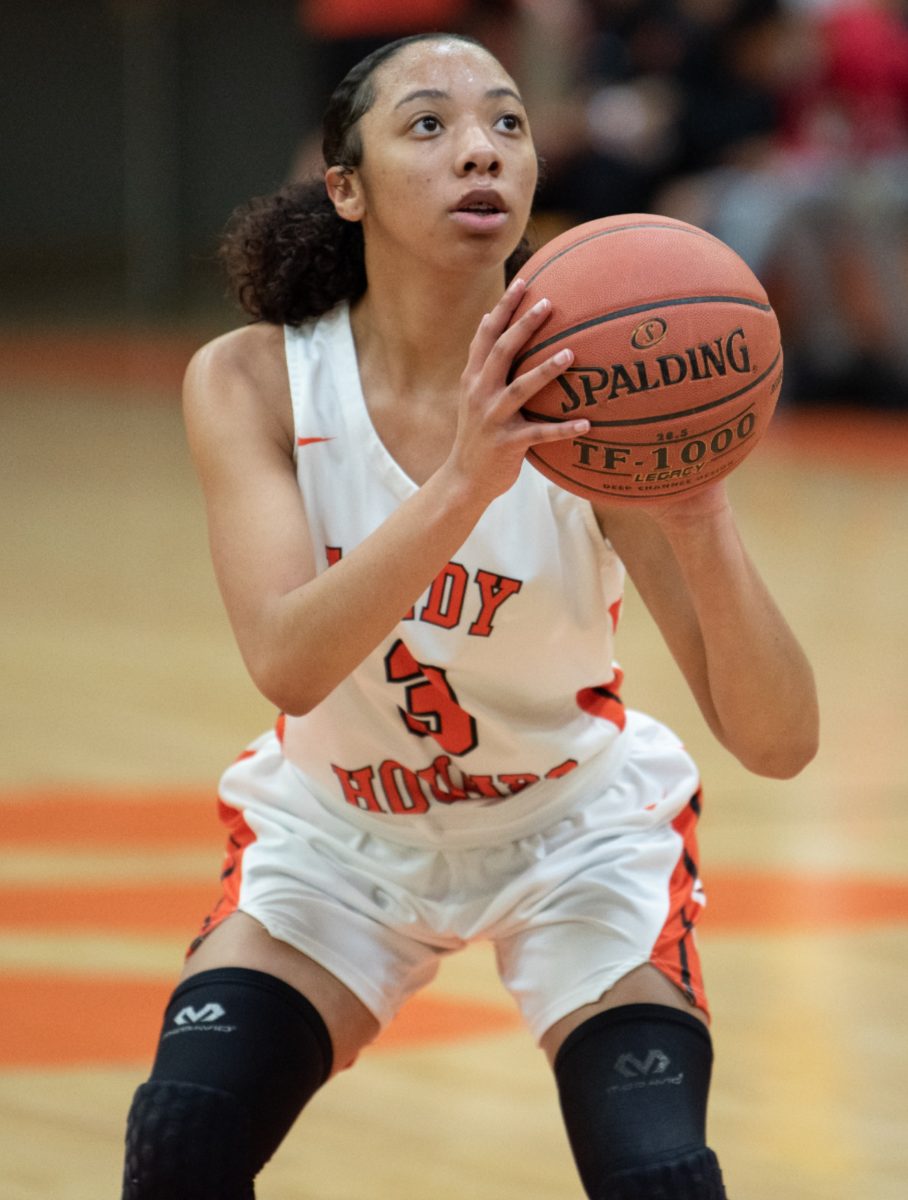 TYE WAS DEADLY AT THE LINE – Senior guard Chez Tye’s totals for the two games saw her with 24 points, 7 rebounds, 8 steals and a 13 of 14 performance from the free throw line.
WHITNEY GRAY WIGLESWORTH I Paris Schools Media Relations

Three consecutive made threes by three different players that weren’t named Haven Ford, saw the Lady Vikings go on a 13-0 run to push ahead of the Ladyhounds 33-29. Tye’s made three and two made free throws each from Tye and Cowan moved Paris back in front at 36-33. Rowan answered when Ford and Chandler went to work over the final two minutes of the period to help their team tie the score at 39-all heading into the final eight minutes of regulation.

The fourth frame became a free throw marathon as each team lived at the line. Paris finished the quarter making 8 of their 13 attempts, while Rowan made 6 of their 10 attempts.

Strings’ three to start the period gave the Ladyhounds a 42-39 lead. Two straight baskets from Hailey Rose moved the Vikings back in front at 43-42. Back-to-back driving lay-ups (with one being an and one) by Jackson saw Paris regain the lead at 47-43. From there, the Ladyhounds, behind the play down the stretch of Cowan, never trailed again as they cruised home for the victory, outscoring the Lady Vikings the rest of the way 9-6.

“We didn’t shoot the ball as well as I would have liked but we were able to keep ourselves in the game with our defense,” Speaks said afterwards. “I also think Zoe did a phenomenal job in defending Haven and making things difficult for her.”

Ford finished her evening with 12 points and Chandler added 14.

Cowan, who has been on a tear here of late, paced the Ladyhounds with 18 points and 16 rebounds. Jackson followed her with 17 points, 6 rebounds, 5 assists and 3 steals leaving the Paris Coach to say this about their play.

“We’re starting to get some great play out of Jamie and Sanaa. They were huge for us against Rowan and has been the last three games. When they play like that we’re a much better team.”

Other stat highlights saw Strings with 11 points, 5 rebounds and 6 blocked shots. Tye added 9 points and 4 steals, while Nia Kenney scored one point and pulled down 3 rebounds.

Although they were playing a Scott High team without the services of leading scorer Mya Meredith, Coach Speaks knew that his team would still have to play well against a Lady Eagles (14-7) team that still brought enough ammo to Redwine Gym.

Paris jumped out of the gate quick with the 17-9 lead after one quarter of play. Strings, Jackson, and Cowan did the most damage for Speaks’ team during the opening eight minutes.

Scott, behind Allen and some stifling defense, caught up to the Ladyhounds before the half would come to a close at 24-24, with Allen leading the way with 7 points in the frame. 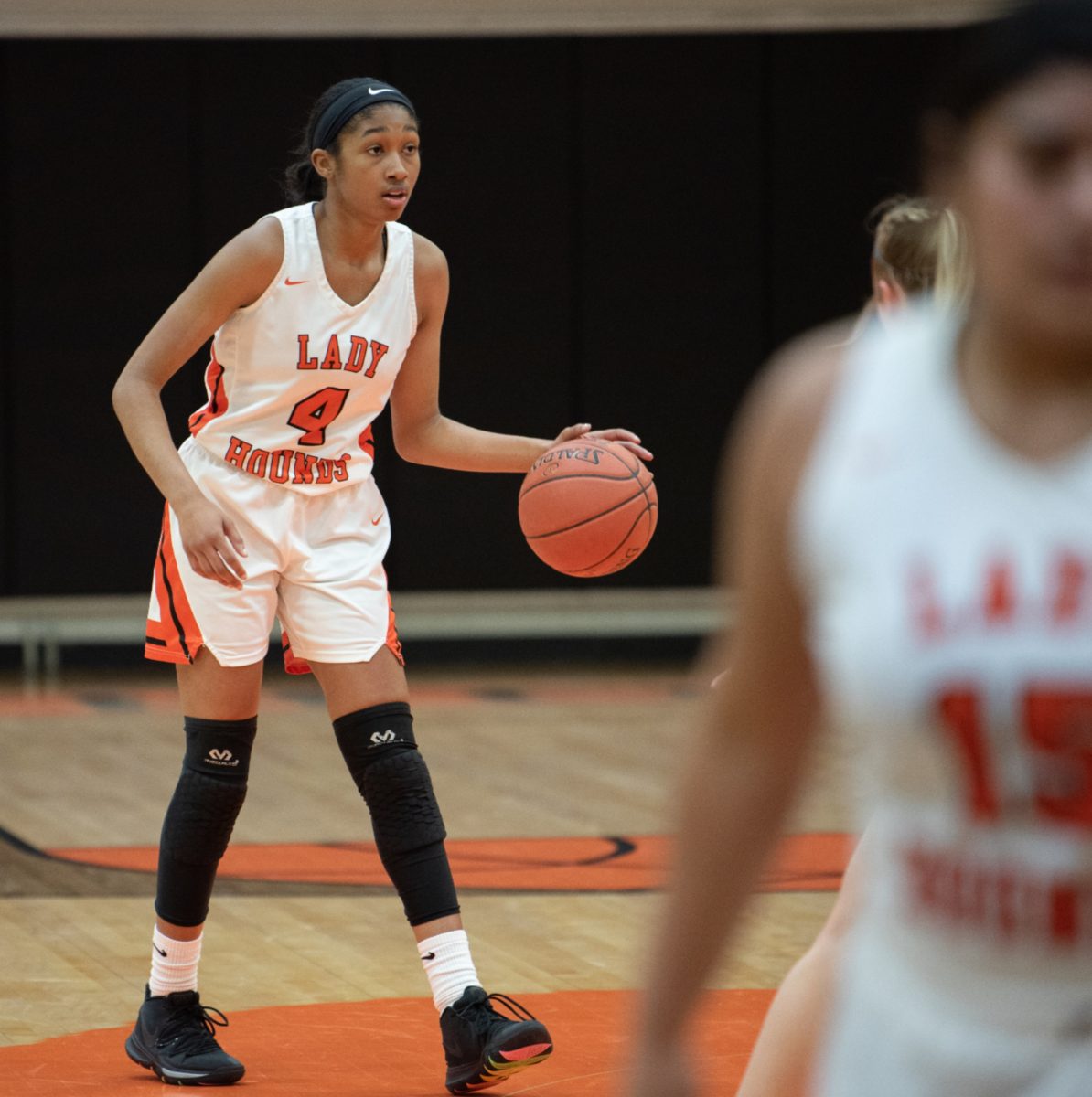 Five straight points from Jackson, helped Paris move out to a seven point lead (37-30) midway through the third, before Scott, behind the scoring of Macy Campbell and Allen, closed the quarter on a 7-2 run to get back to within two of the Ladyhounds at 39-37.

A three from Jackson and four straight points by Cowan, saw Paris increase their lead to 46-39 three minutes into the period. Back came Scott.

Led by Allen and Ava Coleman, the Lady Eagles responded with an 11-1 run to push ahead 50-47. Paris, thanks to Tye, raced back into the lead at 55-54 and then held on from there behind some clutch free throw shooting of Tye and Jackson over the closing seconds of the game to pull out the win.

“It was a great team win over a very good team and everyone contributed in some manner,” said the Paris coach following the game.

Allen led Scott with 21 points and 13 rebounds. Campbell tossed in 11 points and 10 rebounds, while Coleman added 9 points and 5 rebounds. Madelyn Wilson totaled 6 points and 11 rebounds as the Eagles won the battle on the boards 43-31. 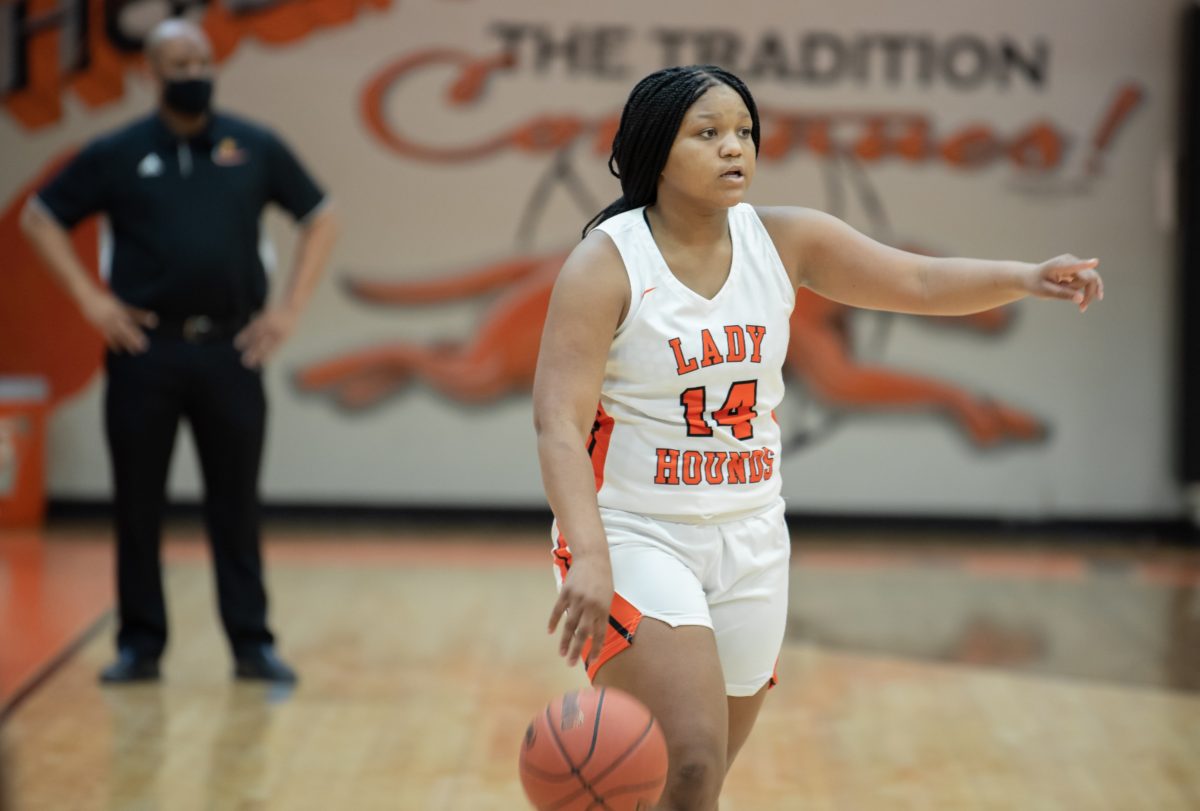 The next time the Ladyhounds (14-4) take the court, it’ll be in the 40th district tournament against Montgomery County (12-3) on March 17th. The post season tournament will be played at Paris.

Paris defeated Montgomery 57-49 inside Redwine Gym back on February 18, but only to see the Lady Indians, a week later in Mt. Sterling, avenge the loss by taking down the Ladyhounds 54-41.