They concluded their regular season

with a victory over Frederick Douglass 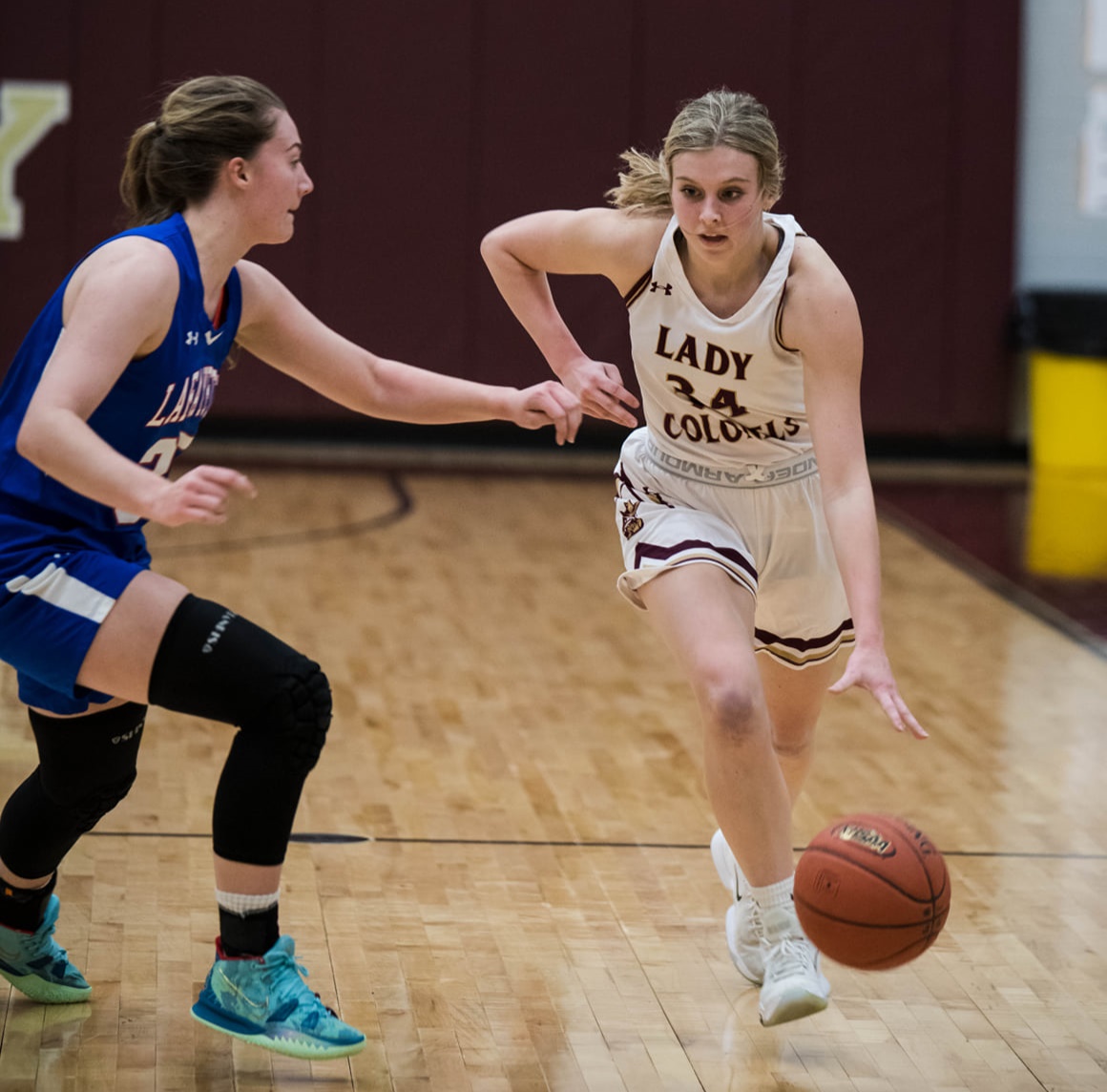 PARIS, KY – There’s no secret that the 2020-2021 basketball season has been like no other with all of the Covid and weather cancellations that saw teams scramble each day to pick up a game. Coach Bill Watson did that and some trying to find teams to play his Lady Colonels with some coming on a one day notice. And the Coach will be the first to tell you, it wasn’t easy.

This week, his team capped off their regular season by playing four games in five days against some very quality opponents that included the likes of Lincoln County, Montgomery County, Lafayette, and Frederick Douglass. When it was all said and done, the Lady Colonels opened their week with a win and concluded their week with a win but losing the two games in the middle, although they had the advantage in both games before squandering leads down the stretch.

Overall, the Lady Colonels played 8 games in 12 days, leaving the Coach pleased with their effort.

“A unique stretch because of a unique year,” the Colonel coach shared over a text message. “We were really running on fumes. Proud of our kids for gutting out that stretch and getting the win at the end. We did lots of good things.”

A driving lay-up from Frederick Douglass’ junior Bradley Price gave the Broncos the early 2-0 lead 19 seconds into the game. That, however, would be their first and only lead of the game.

Freshman Laiken Hardin’s made three jumpstarted Bourbon on a 12-0 run that was capped off by a made three by senior McLain Murphy. Another three from Murphy and consecutive buckets by junior Jaydyn “Shorty” Goodwin and senior Lyndsay Johnson saw Watson’s team increase their margin to 19-6, before Douglass closed the quarter scoring the final five points to get back to within single digits at 19-11. 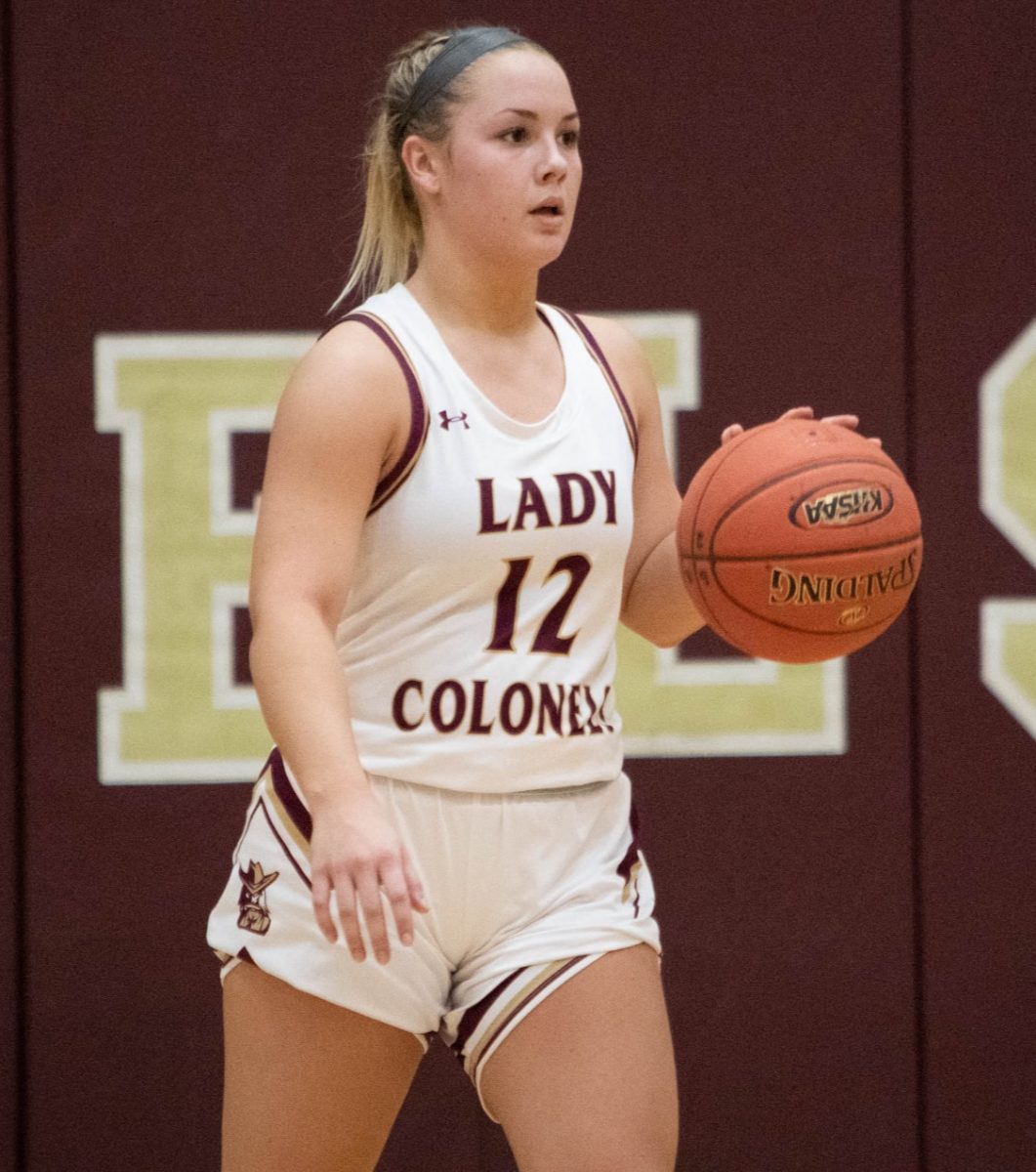 Bourbon pushed the lead by to 13 (25-12) early in the second frame behind the scoring of Johnson and senior Hannah Hamelback. Again, Douglass responded with another late quarter surge to close the gap to three (26-23) just seconds before Lady Colonel freshman Caylie Baker finished off the half with an old fashion three-point play that enabled her team to take a 29-23 lead into the halftime break.

The third quarter was nip and tuck all the way with Bourbon never gave up their lead but FD stayed close. By the end of the frame, a 6-0 run by the visitors from Lexington left them trailing the Lady Colonels by two (38-36) heading into the final eight minutes.

A three by Johnson and free throws from Shorty Goodwin and Murphy helped BC push their advantage to 44-36 just two minutes into the frame. After the Broncos got to within five at 44-39, the Lady Colonels pushed the margin out to nine (48-39) following made baskets by Johnson and Shorty Goodwin. From there, the game would be decided from the free throw line.

Making 9 of their 11 attempts, Douglass crawled back into the game late by trailing by three points at 53-50 and with the ball.

With their team needing a stop, Watson’s team would get it when Shorty Goodwin took the ball from the Douglass player in the backcourt and following a Colonel timeout, Johnson hit one of two from the line to secure the win for BC.

Johnson paced Bourbon with 12 points, 8 rebounds, 5 steals and blocked 2 shots. Shorty Goodwin had 11 points, 3 rebounds, 5 assists and 3 steals, while Murphy matched her with 11 points. Hardin finished with 10 points and 5 rebounds. Hamelback had 7 points, 6 rebounds and 2 blocks. Baker closed out the scoring with her 3 points, as well as 3 rebounds.

Bourbon raced out to a quick 6-0 first quarter lead before Coach Allison Denton’s Generals, behind junior guard Anaya Brown, settled down to close the frame on an 11-4 run to grab the 11-10 lead after one quarter of action.

Lafayette continued their huge run in the second quarter when they opened the period with a 13-2 run just seconds after Bourbon regained the lead at 12-11 on a lay-up from Hardin. After being down by six, Lafayette answered with their 24-6 run, which allowed them to take a 26-17 lead into the halftime break.

Kylie Noble’s made three to start the third pushed the Generals margin out to 29-17. Two made threes from Murphy and made triples by Johnson and Hardin, helped Bourbon close the gap to 34-32. Catherine Jacobs’ trey during the closing seconds moved Lafayette’s lead out to 37-32 going into the final quarter.

Lafayette increased their lead to as much as 12 on two different occasions in the fourth to finish off the Colonels with the 10 point win. Bourbon got to within seven points late but didn’t have enough down the stretch to overtake the Generals. 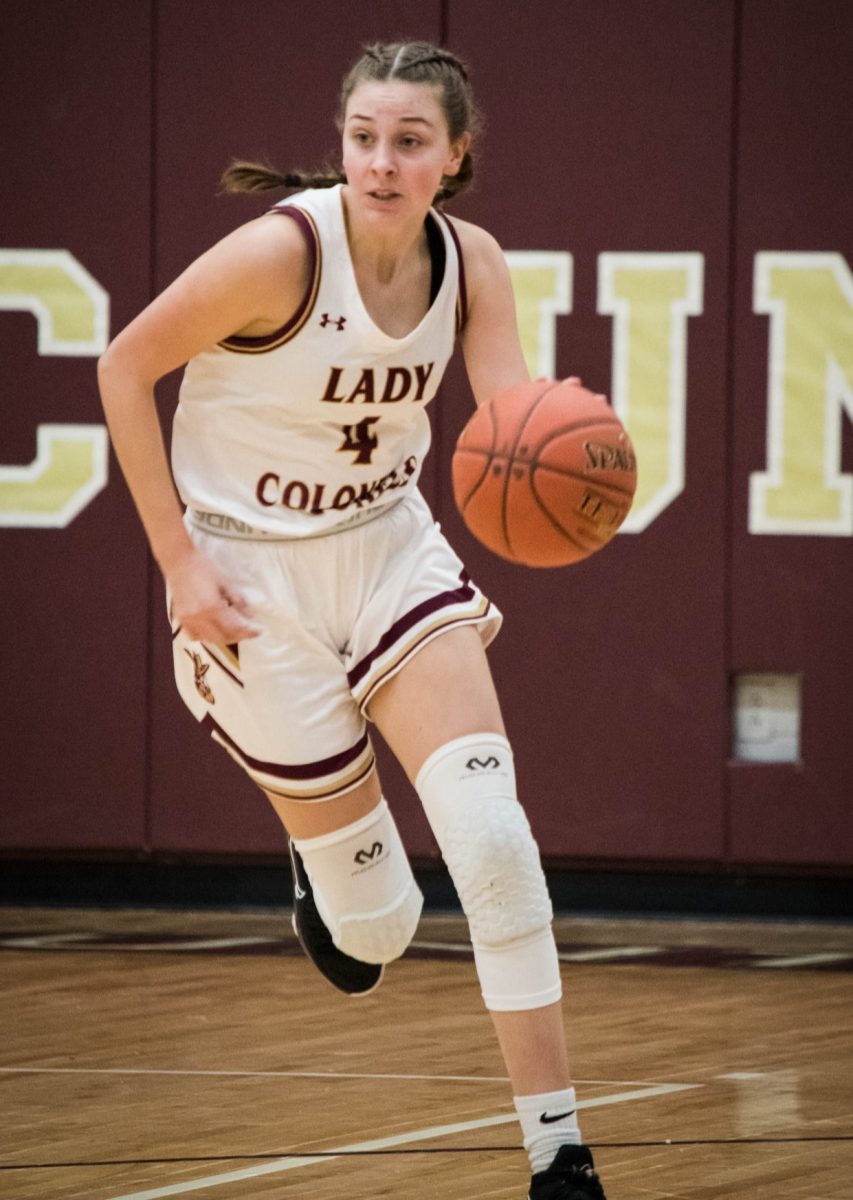 Coach Watson’s squad was clicking on all cylinders against one of the hottest teams in the 10th Region as they raced out to a stunning 20-5 lead over the host Lady Indians after one quarter of action.

The second period was pretty much like the first although MC played them closer, Bourbon, who saw their lead grow to as much as 19 (31-12) won the second period 13-11 to take a 33-16 lead at the halftime break.

Coach Dustin High’s team finally woke up in the third frame as they started the second half with an 11-0 run to close the gap to 33-27. A bucket from BC’s Johnson pushed it back to 35-27. MC would go on another run to cut it to 35-34. The Lady Colonels answered that run with their own 7-0 run to push their lead to 42-34 heading into the final eight minutes.

Over those final eight minutes, Watson’s team struggled to put the ball in the basket but they held a late three-point lead before Montgomery’s sophomore Ella Routt nailed a three at the buzzer to send the game into overtime.

With Bourbon battling foul trouble in the extra period, the Lady Indians, behind senior Savannah Parker and sophomore Shae Harris, took control of the game to pull away with the 61-54 victory, as they scored 45 points over the final 20 minutes of the game, while the Lady Colonels could manage only 21 points, after scoring 20 in the opening frame.

MC’s Harris led all scorers with 17 points and 12 rebounds. Parker, on 7 of 10 shooting from the field, scored 16 points and pulled down 10 boards. Other highlights saw Reaghan Oney with 9 points and 8 rebounds and Hayden Barrier 8 points and 6 rebounds. Rounding out their scoring were Routt with 6 and Allie Dillon 4. 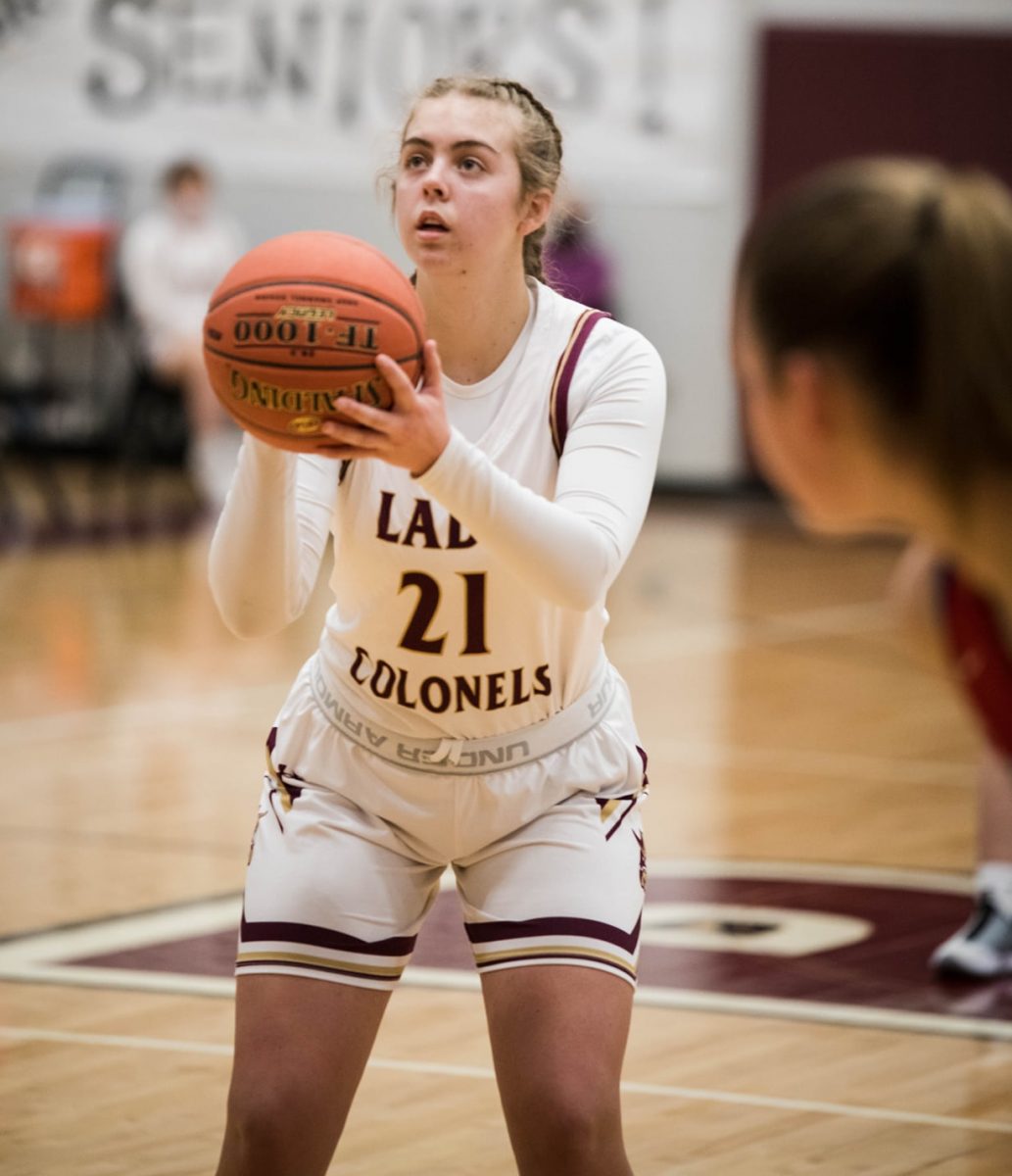 Coach Brandon Fisher’s Lady Patriots held the early lead by winning the first quarter 13-10 and tied the host team in the second frame 11-11 to grab a 24-21 lead at the break.

The Lady Colonels started blistering the nets in the third quarter and carried that over to the final eight minutes to outscore the Patriots 39-18 in the second half to pull away with the 18 point win.

Murphy led BC with 18 points, 10 rebounds and 3 steals. Hamelback had 15 points, 7 rebounds and 3 assists. Johnson followed with 15 points, 4 rebounds, 3 assists and 5 steals. Shorty Goodwin’s numbers saw her with 8 points, 6 rebounds and 4 assists. Rounding out the scoring had Hardin and Jaylynn Goodwin with 2 points each. 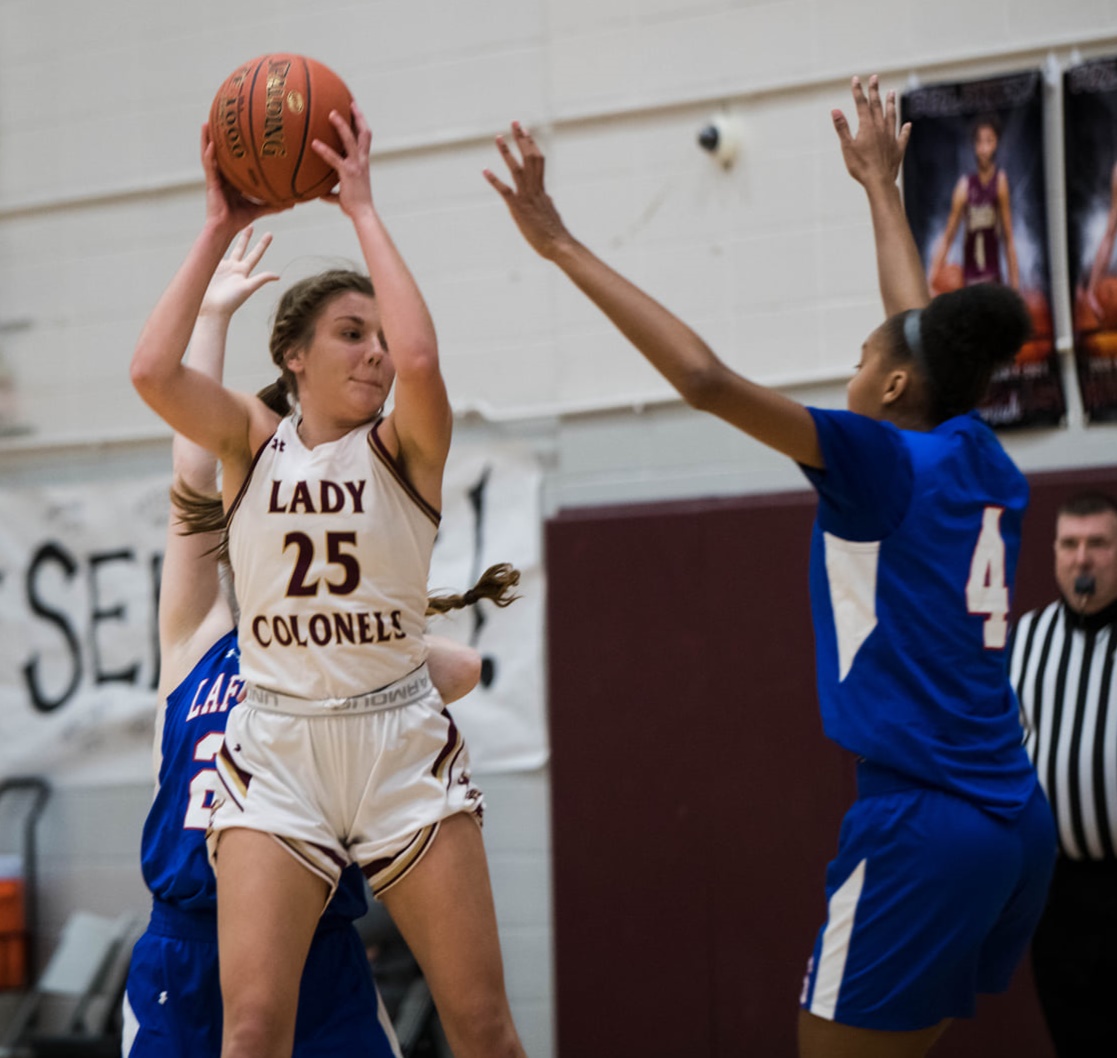 The next time Coach Watson’s Lady Colonels (9-12, 0-6) take the court, it’ll be in the 40th district tournament against Coach Robbie Graham’s seven-time defending district champions George Rogers Clark Cardinals (15-5, 5-1) in the semifinal round on March 16th at Paris High School. GRC won both regular season matchups by scores of 73-49 (it was a six point game early in the fourth quarter) and 64-24, as Bourbon played the second game without their leading scorer Lyndsay Johnson.

The district tournament will continue on Wednesday night March 17th when Coach Aaron Speaks’ second Paris Ladyhounds (14-4, 4-2) take on Coach Dustin High’s Montgomery County Lady Indians (12-4, 3-3) in the rubber match. Paris defeated Montgomery 57-49 inside Redwine Gym back on February 18, but only to see the Lady Indians, a week later in Mt. Sterling, avenge the loss by taking down the Ladyhounds 54-41.