Robbie Graham picks up win No. 200 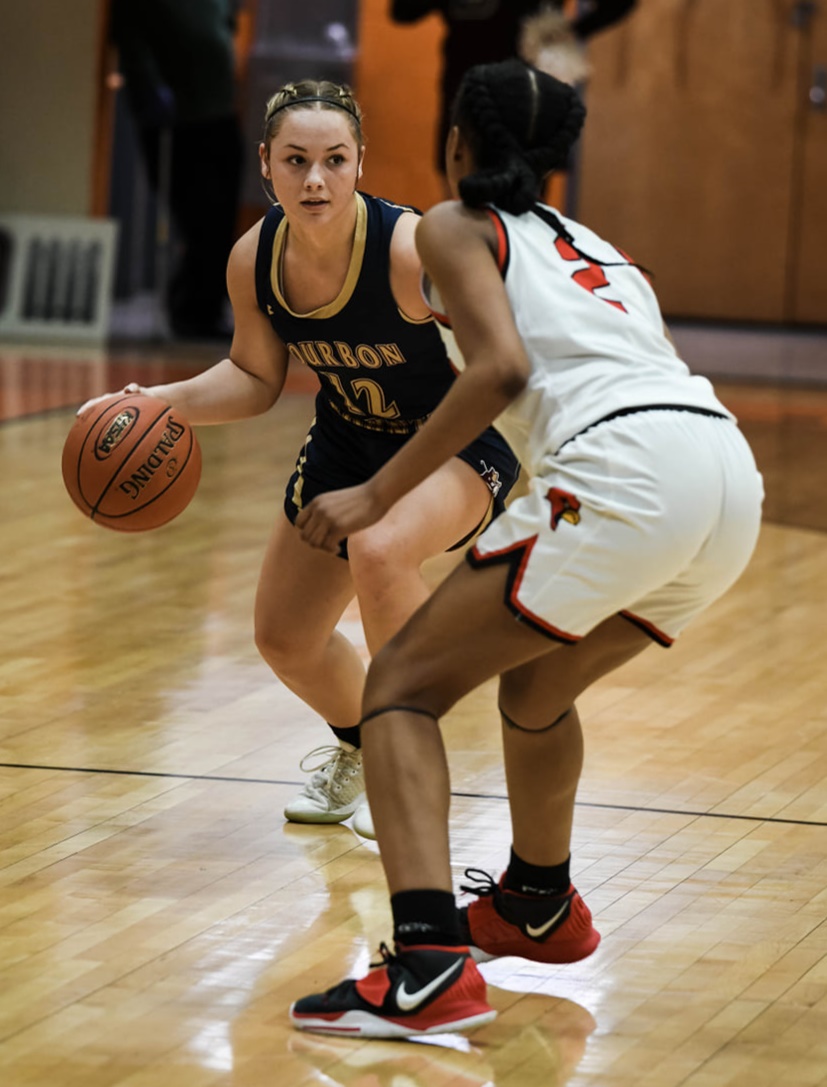 JUST GIVE ME A MINUTE – With Clark’s junior Trinity Gay guarding her tight, Lady Colonel junior guard Jaydyn “Shorty” Goodwin paused for a few seconds as she thought about her next move to get around the defense of Gay. Goodwin was named to the All-Tournament team after leading her team in scoring. KRISTA BARNETT I For BCHS Sports

PARIS, KY – Going into their district tournament semifinal game against top ranked and defending seven-time champion George Rogers Clark inside Earl Redwine Gym yesterday evening, Coach Bill Watson knew that his team had to follow their game plan if they stood a chance against the district heavyweight, who defeated the Lady Colonels by 24 and 40 points respectively during the regular season. 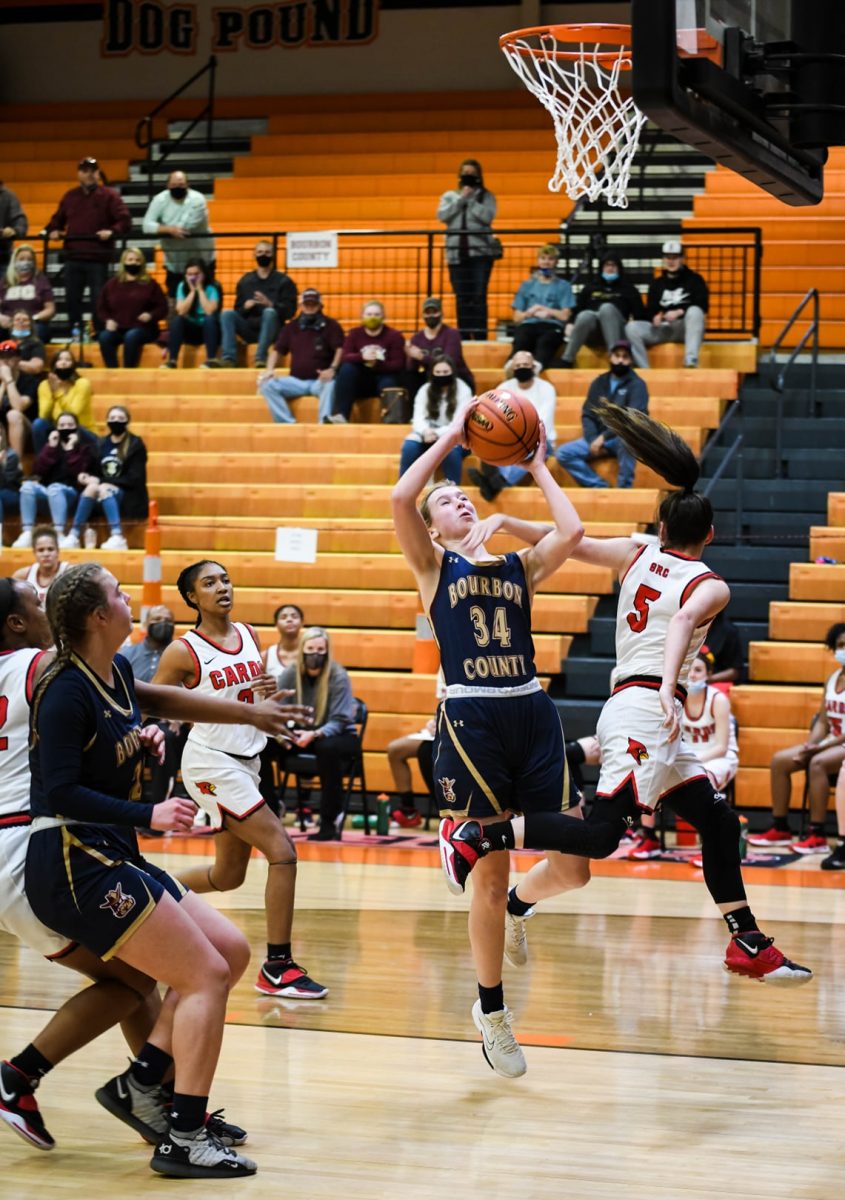 HEADED TO THE FREE THROW LINE – While making her way to the basket, Lady Colonel senior guard Lyndsay Johnson was fouled by Lady Cardinal senior Erica Berry during this first half field goal attempt.
KRISTA BARNETT I For BCHS Sports

For the most part, Watson’s team did follow their game plan but unfortunately, not making shots wasn’t included in that plan as they had to battle through a tough shooting night and never found a rhythm, allowing Coach Robbie Graham’s Cardinals (16-5) to pull away for the 53-27 blowout victory to advance to their 14th straight 40th District Championship game, where they will face the Paris/Montgomery County winner on Friday night at Paris.

Senior forward Hannah Hamelback’s runner just a minute into the contest gave Bourbon the early 2-0 lead. Painfully for the Lady Colonels, that would be their final made field goal for the next 19 minutes of the game, as shot after shot, just wouldn’t fall.

In the meantime, the Cardinals led 8-5 after the first quarter as four different players scored for GRC, while Bourbon countered that with three made free throws from senior guard Lyndsay Johnson.

Despite having four starters with two fouls and one with three, the second quarter turned out to be the difference of the game for the team from Winchester.

With the Lady Colonels missing shots from all over the court, junior guards Trinity Gay and Asja-li Garrard, as well as sophomore forward Brianna Byars started heating up as GRC took full advantage of the cold-shooting Lady Colonels.

Two free throws from freshman Laiken Harden moved the score to 12-7. Clark responded with back to back buckets from Garrard and a made three by Gay to increase their lead to 20-7. Bourbon added two more free throws to get to within 11 but the Cardinals, behind the scoring of Gay and Byars, answered once again with a half closing 10-2 run to take a 30-11 lead into the locker room as they outscored Watson’s team 22-6 during the frame. 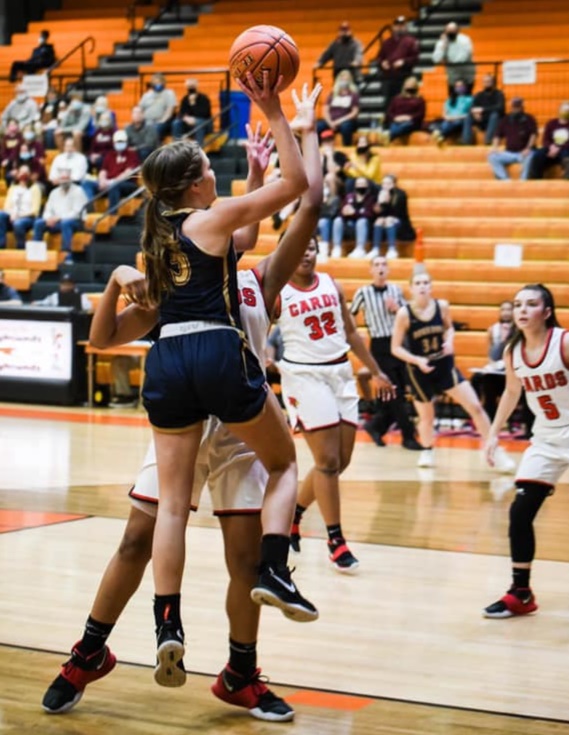 EARLY BUCKET – Lady Colonel senior forward Hannah Hamelback goes up for this shot attempt just in front of the GRC defender to give her team the early 2-0 lead. The made field goal by Hamelback would be Bourbon’s only made field goal in the first half. KRISTA BARNETT I For BCHS Sports

As a team, the Lady Colonels finished the frightful first half 1 of 21 from the field, missing their final 20 field goal attempts after Hamelback started the game with the made basket. The Lady Colonels stayed somewhat in the game after making 9 of their 13 free throw attempts over the first 16 minutes.

Bri Byars’ old fashion three and a made basket by junior forward Tyra Flowers, surrounded around a made free throw by Bourbon’s Johnson, Clark’s lead grew to 35-12 midway through the third.

The Colonels closed the gap to 35-16 when junior guard Jaydyn “Shorty” Goodwin ended her team’s streak of missed shots when she hit back-to-back lay-ups two minutes apart. Up to that point, Watson’s team had missed 26 straight field goal attempts. GRC, thanks to Byars and Flowers, would go on to outscore Bourbon the rest of the quarter 7-2 to take a 42-18 lead into the final eight minutes.

A lay-up from Flowers, a nice spin move from Byars and a put back by eighth grader Ciara Byars helped GRC race out to their biggest lead of the evening at 30 (48-18) with 6:25 left in the contest. From there, both teams would clear their bench midway through the quarter to put the finishing touches on this district tournament game as GRC pulled away for the 26 point victory, outscoring Bourbon 11-9 in the final frame.

For the game, the Lady Colonels finished 7 of 46 (15.2%) from the field and regardless of their game plan that’s not going to get it done against a good team like Clark. Bourbon also missed 16 of their 18 three-point field goal attempts but did finish 11 of 17 from the line.

“We felt good about what we wanted to do offensively and defensively,” Coach Watson said. “We knew going in that we had to make shots … we just picked a bad game to struggle from the floor.”

GRC’s Bri Byars led all scorers with 13 points and Gay followed her with 11. Flowers totaled 7 points, Amber Miller had 5, and 4 points each came from Ciara Byars, Garrard, and Makili Tabor. Rounding out their scoring saw Annette Miller with 3 points and Erica Berry with 2.

With the win, George Rogers Clark’s Head Coach Robbie Graham picked up his 200th victory as the Lady Cardinals coach. He took over the team back in 2012-2013.

“I am very blessed to be able to do what I love. Coaching basketball and working with kids are my passion. I am proudest to see these young ladies grow into successful adults,” Coach Graham said through a text message. “200 is definitely not about me. It’s about the young ladies I have had the pleasure to coach. Truly been blessed to coach some outstanding young ladies on and off the court. I am thankful to have tremendous coaches that are great people working with me, a dedicated support staff along with administrators that support our program.”

The Coach conclude by adding, “Coach them hard but Love them HARDER” 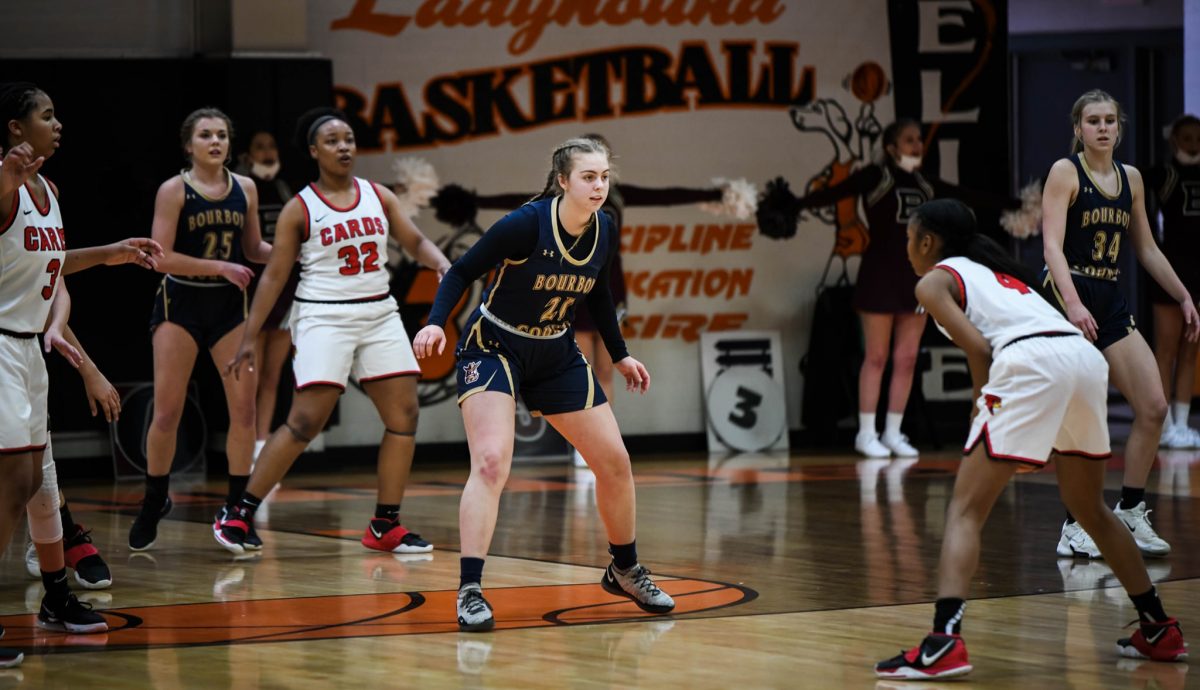 I GOT MY EYES ON YOU – Bourbon senior forward McLain Murphy kept a close eye on GRC’s junior guard Asja-li Garrard in hopes of keeping her from getting to the basket. KRISTA BARNETT I For BCHS Sports