PARIS, KY – The Montgomery County Lady Indians rolled into Earl Redwine Gymnasium Wednesday night to set the record straight and let everyone know that when they beat Paris in Mt. Sterling last month, it wasn’t a fluke.

Behind the sensational play of freshman all-region guard Hayden Barrier and sophomore forward Shaelynn Harris, who was snubbed from the all-region team, Coach Dustin High’s young Lady Indians took some of Paris’ best punches but never collapsed as they kept their balance and stayed on their feet to leave Redwine Gym with a well-earned 53-44 victory over an incredibly talented Paris team that was ranked among the elite in the 10th Region all season long.

Barrier, the daughter of former Miss Kentucky Basketball winner Beth (Vice) Barrier, was on a mission as she, as well as Harris, put their team on their back and told them to hold on tight for the ride. Although bumpy at times, the rest of the Montgomery team held tight and that allowed Coach High’s team to pull out the win.

“Hayden played like one of the top players in the region and Shaelynn got us off to a good start and stabilized us late,” Coach Dustin High shared over a text message. He went on to add that his lone senior Savannah Parker also controlled the paint and the glass on both ends of the court. 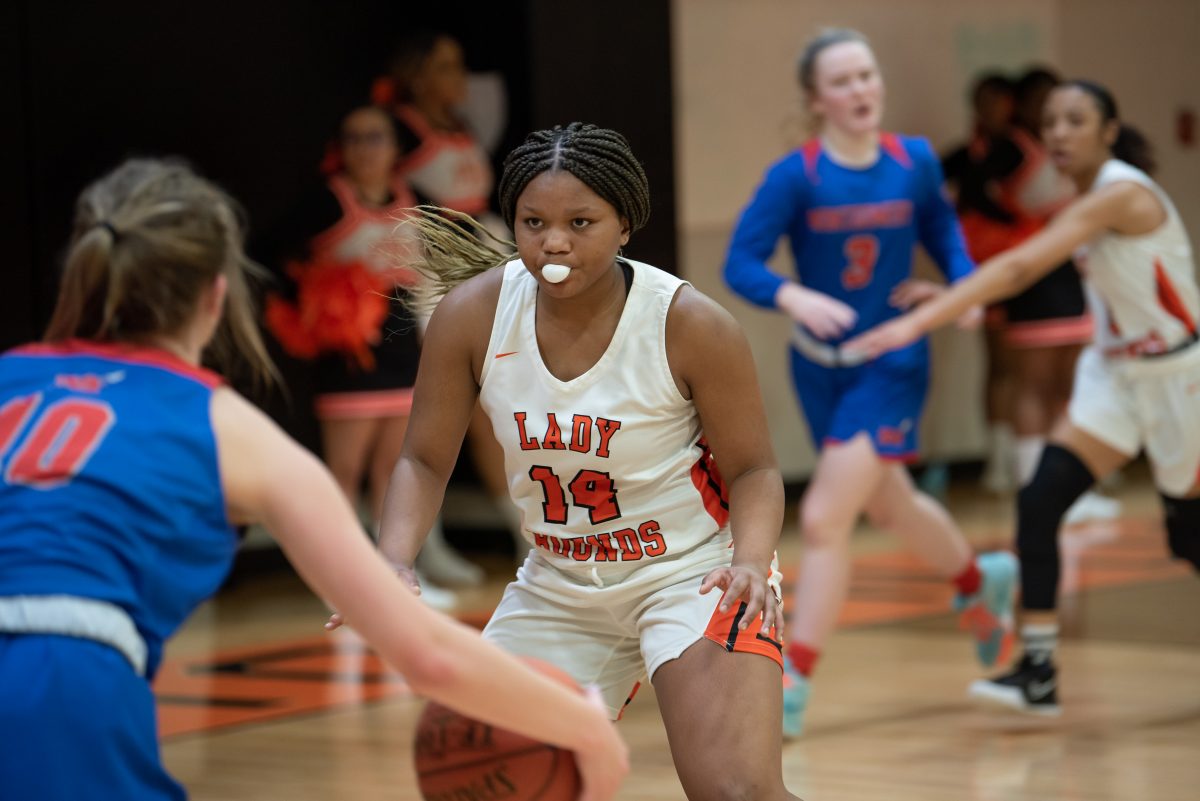 JACKSON IS FOCUSED – Ladyhound sophomore Sanaa Jackson, while having a moment to blow a bubble, was locked in on Montgomery County freshman Hayden Barrier during second half action of their game last night inside Redwine Gym. Jackson led Paris with 19 points that included five made three-point goals.  WHITNEY GRAY WIGGLESWORTH l Paris Schools Media Relations

The wire-to-wire victory by Montgomery (13-4) will now set up a showdown with rival George Rogers Clark (16-5) in the 40th District Championship game that will take place tomorrow night at 7:00 inside Redwine Gym. 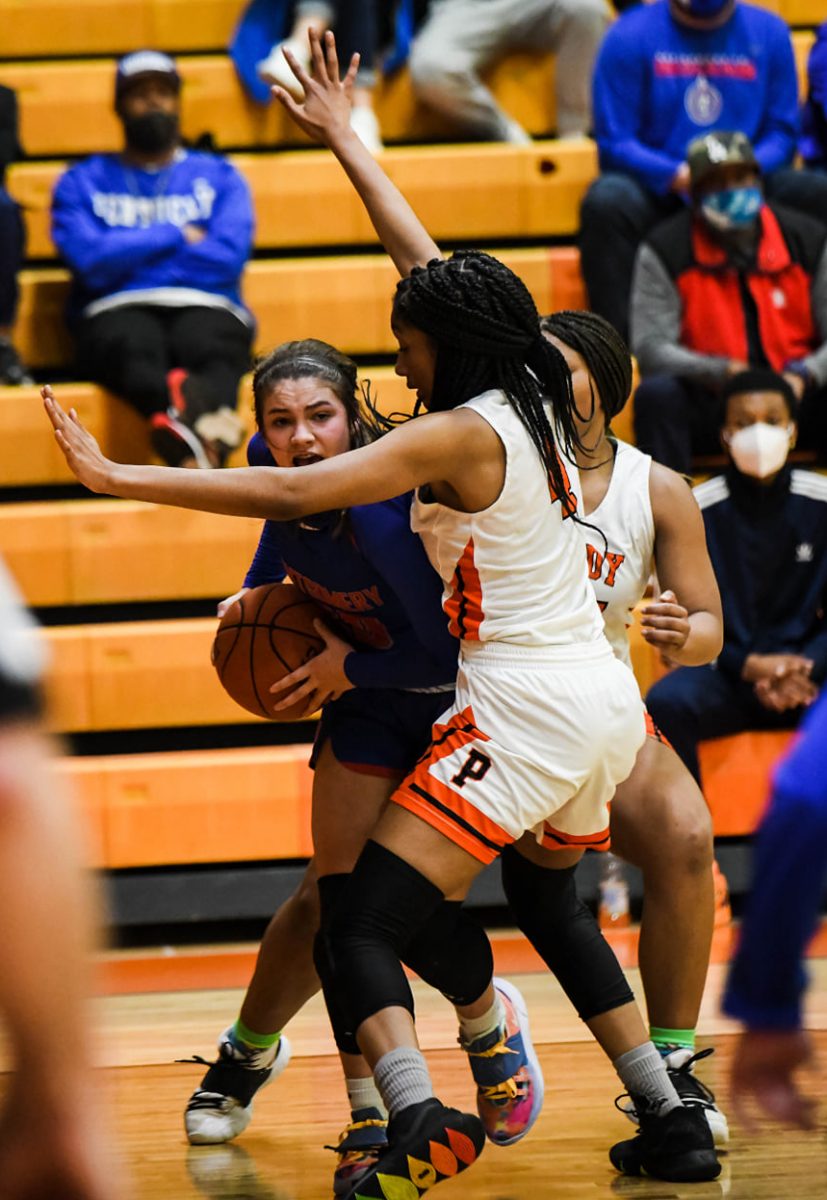 FIGHTING HER WAY TO THE BASKET – Despite being tightly guarded by Ladyhound Zoe Strings and Sanaa Jackson, Lay Indians freshman Hayden Barrier tried her best to break free of the two Paris defenders. Barrier led her team with 23 points that saw her hit key after key shot to lead her team to the district tournament win.
KRISTA BARNETT I For The Citizen

For Paris, the loss snapped their 28-game home win streak as they suffered their first defeat inside Redwine Gym for the first time since January 17, 2019, therefore concluding their season with a 14-5 record.

“We had a hard time putting the ball in the basket at the beginning of the game and that got us down early but I was proud of my kids effort to get back in the game,” the Paris Coach said afterwards. “You have to give Montgomery County credit because every time we got within one or two points they would hit a big shot on the other end. Every run that we made at them, they answered.”

Barrier, playing like a future Miss Basketball candidate, paced the Lady Indians with a game-high 23 points, while Harris followed with 12, with most of her damage coming in the opening quarter when Montgomery raced out to their big lead. Other scoring saw Parker with 8, while freshman Allie Dillon chipped in 5. Rounding out their scoring had freshman Reaghan Oney with 3 and sophomore Ella Routt 2.

Paris’ sophomore guard Sanaa Jackson, who caught fire late in the game, nailed a three with seconds left in the third quarter that helped her team close a once ten point Montgomery third quarter lead down to one at 32-31. However, just seconds later, instead of accepting Jackson’s huge basket, Barrier, playing with all types of poise, nailed a game changing three just inside the midcourt line to rip the momentum away from the Ladyhounds as she put her team up 35-31 heading into the final frame.

An uncontested three from Harris to start the fourth and another made three by Dillon, pushed Montgomery’s advantage to 41-32 in a matter of minutes after Paris, behind the scoring of Jackson and senior sensation Zoe Strings, used a lot of their energy fighting just to get back in the game.

Montgomery didn’t stop there as they kept pouring it on against a Ladyhound team that never quit. Back to back baskets by Barrier, and a put back basket from Parker, increased the Indians margin to 47-34 with just 2:00 left in the contest.

Consecutive made threes from Jackson, a driving layup by Tye and a steal and lay-up from Strings saw the Ladyhounds close the gap to seven at 51-44. Time, however, was not on Paris’ side as MC held on from there to pull out the nine point win following two made finishing free throws from Barrier. 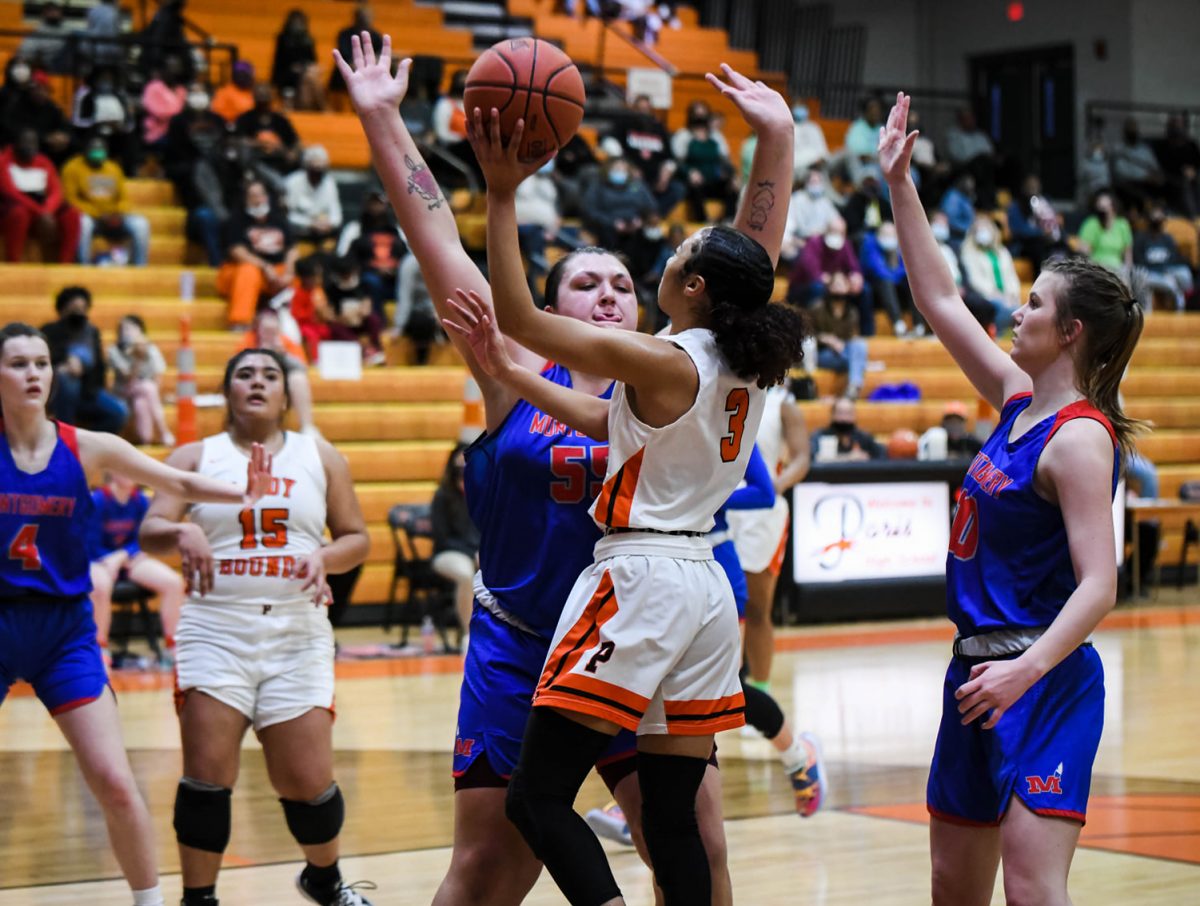 HIT US WITH YOUR BEST SHOT – Ladyhound senior Chez Tye put up this shot attempt just over the outstretched arms of Lady Indians senior Savannah Parker and freshman Allie Dillon. KRISTA BARNETT I For The Citizen

“Going in we knew it was going to be a war for 32 minutes and that both teams were going to make runs,” said High. “I’ve got a ton of respect for Coach Speaks and his program. Every time we got a lead they answered and got it tight again. We were fortunate to make the last run of the game.”

MC’s Harris scored the first two points of the game and from there her team never looked back as they opened the contest on fire by racing out to a 15-4 first quarter lead that saw Paris brick 12 of their 13 field goal attempts during the opening eight minutes.

Obviously, the Ladyhounds weren’t going away easy as they charged back behind the scoring of Strings and Tye.

Down 18-7 midway through the second, Strings and Tye accounted for Paris’ next 10 points as they closed the margin to 18-17 with under two minutes left in the half.

But just as they did the entire night, whenever Speaks’ team made a run, Montgomery answered.

A made three by Barrier, followed by a made free throw from Routt that was capped off by a lay-up from Barrier, helped Coach High’s squad end the half by scoring the final six points to push their lead to 25-17 at the break.

Paris, who did make all six of their free throw attempts, finished the first half making just 5 of their 27 field goal attempts with four of those coming during their mini run.

An off-balanced bucket from Harris to start the third pushed MC’s lead to 27-17.

Behind the blistering shooting of Jackson and the nice floor play of Strings, the Ladyhounds went on an 11-2 run to close the margin down to one at 29-28 before Montgomery, who wasn’t about to let Paris overtake them, upped their lead back to four (32-28) on Parker’s lay-up and a free throw from Barrier.

Seconds later, Jackson nailed her three to get her team back to within one at 32-31 but soon to follow was Barrier’s heroic near half court heave that turned out to be the dagger.

Jackson, who made five three-point goals in the second half, led the Ladyhounds with 19 points and 4 rebounds. Strings finished her final night in a Ladyhound uniform with 13 points, 5 rebounds, 5 assists, 4 steals and she blocked 4 shots. Tye, another senior, totaled 7 points and 3 steals, while sophomore Jamie Cowan, who suffered an injury earlier into the game before returning, contributed 4 points and a team-high 10 rebounds. Junior center Nia Kenney added one point and 5 rebounds to close out Paris’ stat sheet and season. LET’S KEEP UP THE INTENSITY – Coach Aaron Speaks talks things over with his team during a timeout that saw Paris close a once 11-point Montgomery lead to one before the Lady Indians closed the first half on a 6-0 run.
WHITNEY GRAY WIGGLESWORTH l Paris Schools Media Relations

The Lady Indians coach concluded by saying that he would like to wish Zoe and Chez nothing but the best in their future endeavors. “It has been a pleasure coaching in the same district with them the past two seasons.”

Coach High knows that his team must come ready to play because up next for Montgomery County is top ranked and seven-time defending district and four-time region champion George Rogers Clark.

“GRC is the team to beat every year in this region until someone proves differently in the post season. Coach (Robbie) Graham does a great job getting his team prepared and they will be a tough matchup for anyone this time of year. We need to limit our live ball turnovers and rebound well to give ourselves the best opportunity on Friday.”

Coach Graham’s Cardinals beat MC, who will be making their first appearance in the finals since 2014, twice during the regular season by scores of 60-37 and 64-36. Regardless of this outcome, both teams will move on to play in next week’s 10th Region Tournament that will be played in Winchester.

The last time Montgomery beat Clark was back on January 29, 2016. Since then, it’s been 13 in a row for the Lady Cardinals over their rival.

For their fine play during the regular season, Zoe Strings, Chez Tye and Jamie Cowan were named to the All 40th District Team, while Sanaa Jackson was named the 40th District All-Tournament Team.

You can view more action photos of the game on photographer Krista Barnett’s Facebook page https://www.facebook.com/media/set/?set=a.4461805987181559&type=3 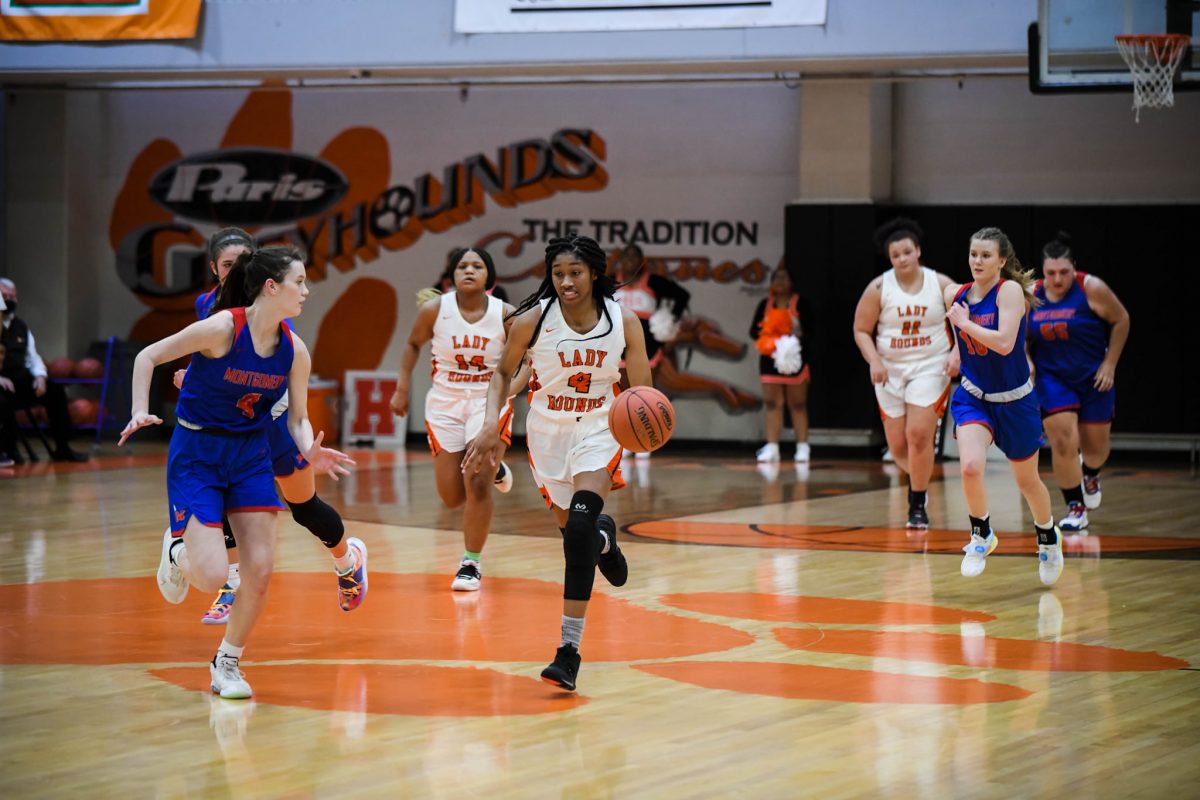 ON THE MOVE – After grabbing the rebound, Ladyhound senior Zoe Strings took out in a dead sprint to outrace Montgomery’s Emily Williams down the floor to score two of her 13 points on the evening. Strings also added 5 rebounds, 5 assists, 4 steals and blocked 4 shots. KRISTA BARNETT I For The Citizen