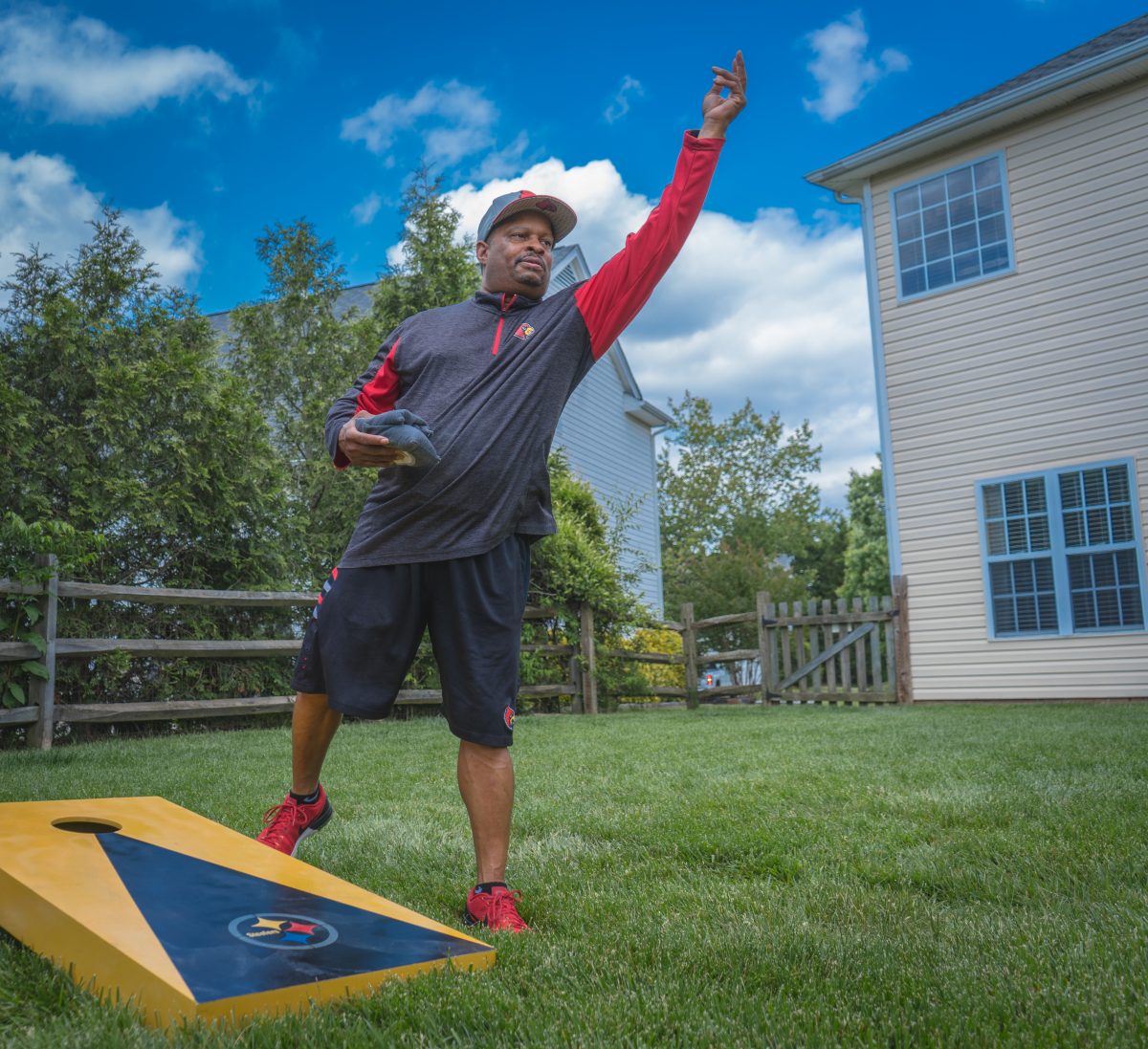 Editor’s note: The Citizen over the past few weeks has received countless inquiries concerning the health and wellness of our beloved sports editor, Ivan “The Doctor of Sports” Rice. Staff writer Pat Conley’s piece, approved by “The Doctor,” attempts to reassure all those who’ve expressed concern and compassion.

“The news of my demise is premature.” –Mark Twain

Ivan Rice’s mailman thought maybe Rice had won the lottery. Because nobody else on Rice’s route was receiving 5-10 personal cards and letters a day. Apparently only politicians and celebrities typically get such a sustained volume of correspondence.

Turns out the postman was partly correct. Because Rice, also known as “The Doctor of Sports”, is indeed a celebrity of sorts to his countless fans throughout Bourbon County and Central Kentucky. But all those notes were “Get Well Quick” encouragement for the 57 year-old sportswriter, involved in the competition of his life, “Rice vs Cancer”.

Rice absolutely remembers the day this past January when his primary care physician (“Dr. Todd Martin—outstanding guy and a Mt. Sterling native, like me”) told him he had an elevated PSA, a possible indicator of prostate cancer. “But I was feeling fine, still very active, playing tennis, softball, kickball and flag football,” Rice recalls. “I knew I had diabetes, but I’m in shape, with no (prostate cancer) symptoms,” he recalls. 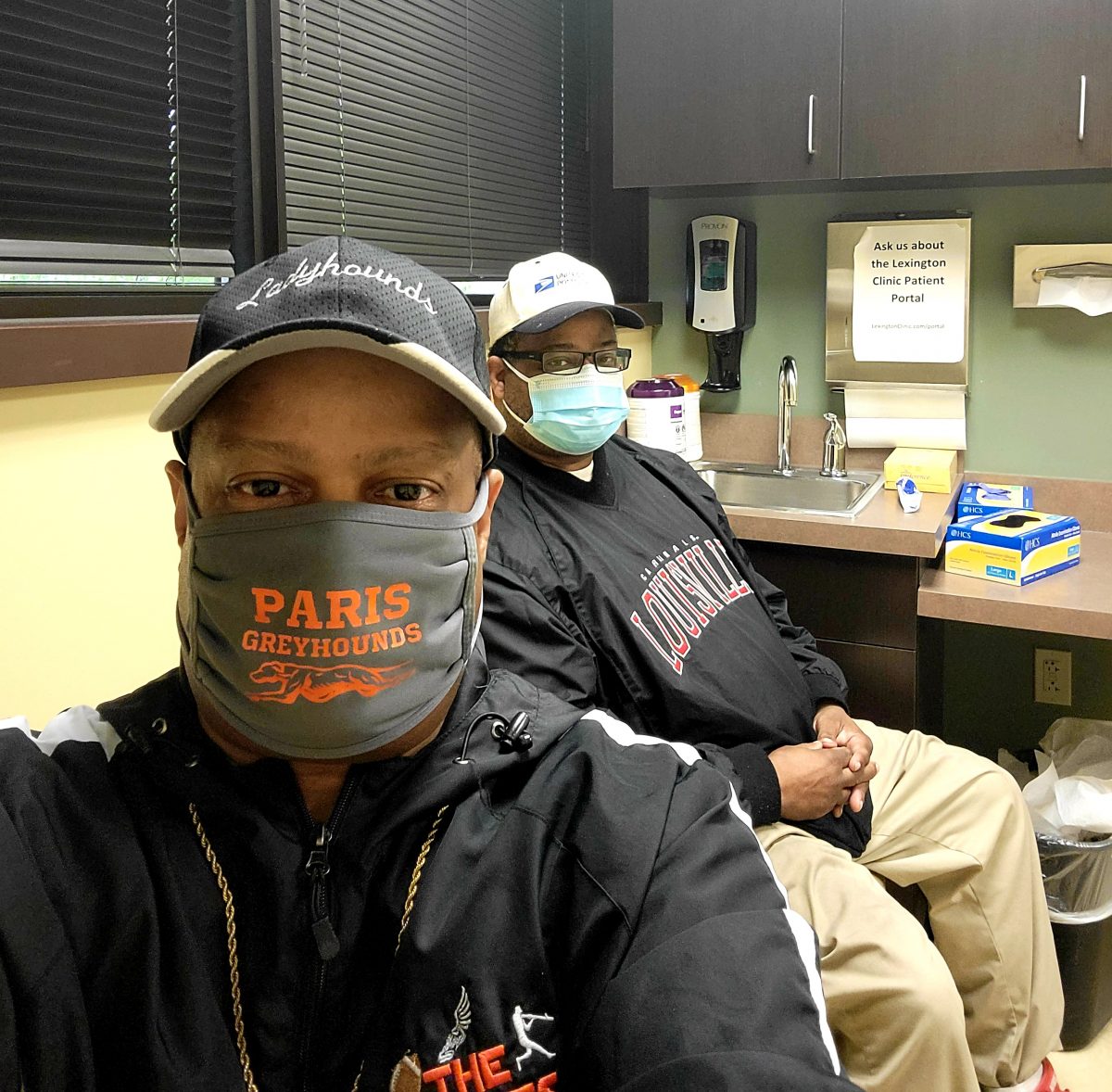 Follow-up tests and a biopsy led Rice to one of the most difficult decisions of his life: surgery vs. radiation or chemotherapy. He remembers sitting outside the urologist’s office at The Lexington Clinic, crying. His dad and hero, Robert, had died of prostate cancer at age 66, in 2006. A stoic and very private man, his dad gave Ivan and his siblings very little warning that his final days were coming. So Ivan wasn’t sure how to tell his mom Seleste, that her son was now involved in the same fight, against the same dreaded disease.

“I felt like I was in the state championship at Rupp Arena, with one second left, and I missed the game-winning free throws,” Rice shared in a recent interview. “I felt like I let down the whole community.” So, after much prayer and reflection, Ivan made the courageous decision to forego radiation or chemotherapy and go straight to surgery. On May 19 he had a prostate gland. On May 20 it was gone. With several weeks of rest ongoing, his long-term medical prognosis is now excellent. And so is his attitude, thanks in large part to tremendous support from local sports fans, young and old, male and female, Greyhounds and Colonels alike. Additionally, coaches and sportswriters from throughout the region reached out to The Doctor, some even making home visits.

All of Ivan’s doctors agree: his incredibly active lifestyle—including football, softball, kickball, tennis, and even running track events in the Bluegrass State Games–directly contributed to his ability to defeat cancer. Remarkably, he’s on track to return to work July 7. And continue playing the sports he loves on Aug. 1!

HOW YOU GONNA KEEP THE DOCTOR OF SPORTS OFF THE SIDELINE?

It’s no secret these days: sports sells the newspaper. And many faithful Citizen readers have probably wondered how Ivan’s byline keeps showing up in the paper, when his doctors won’t permit him to physically attend the various games and track meets. “There’s no secret to it,” Ivan laughs. “I’ve got a lot of sources, who feed me the information I need to write my stories.” 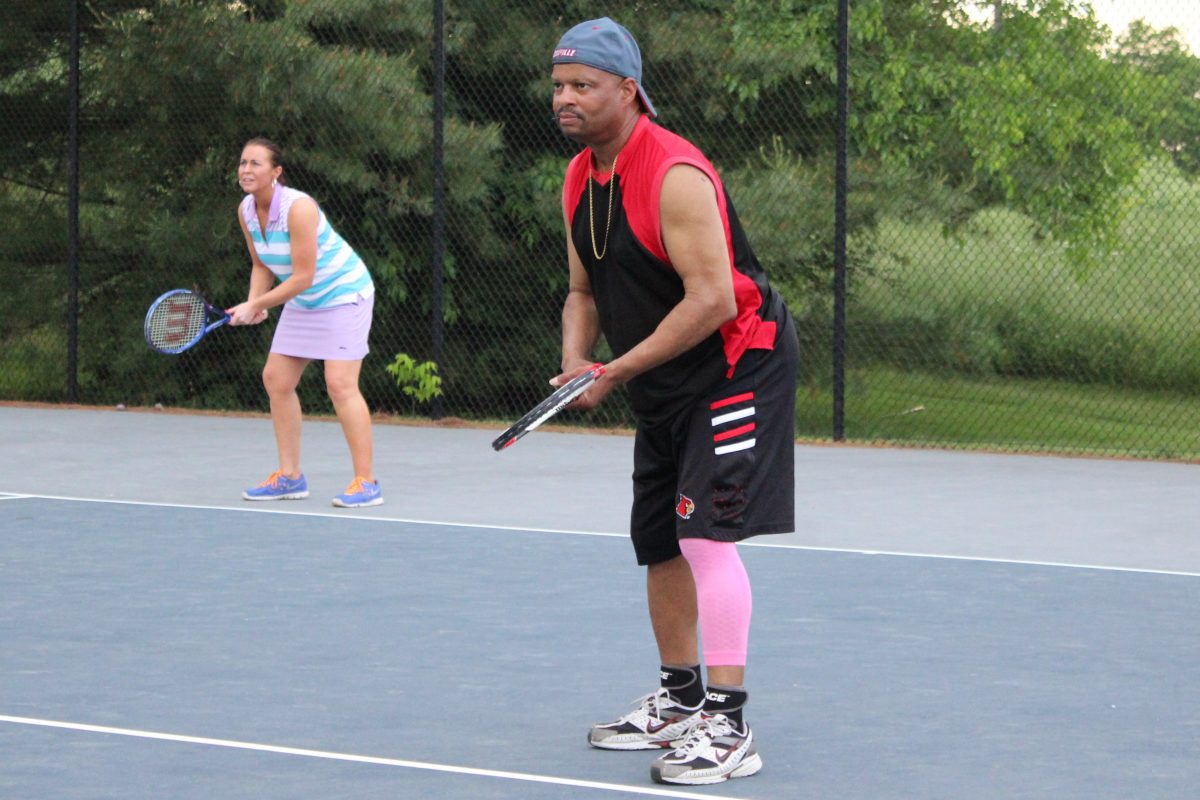 Toward the top of his list of “thank yous” are Gino Guarnieri and his son Matt, owners of “Geno’s Formal Affair” in Lexington,” Ivan’s “day job” since 1996. “They’ve been absolute champs to me,” Rice explains. “They treat me like family, just like when I used to work for (the late) Jim Hunt (of Hunt Bros. Pizza).” 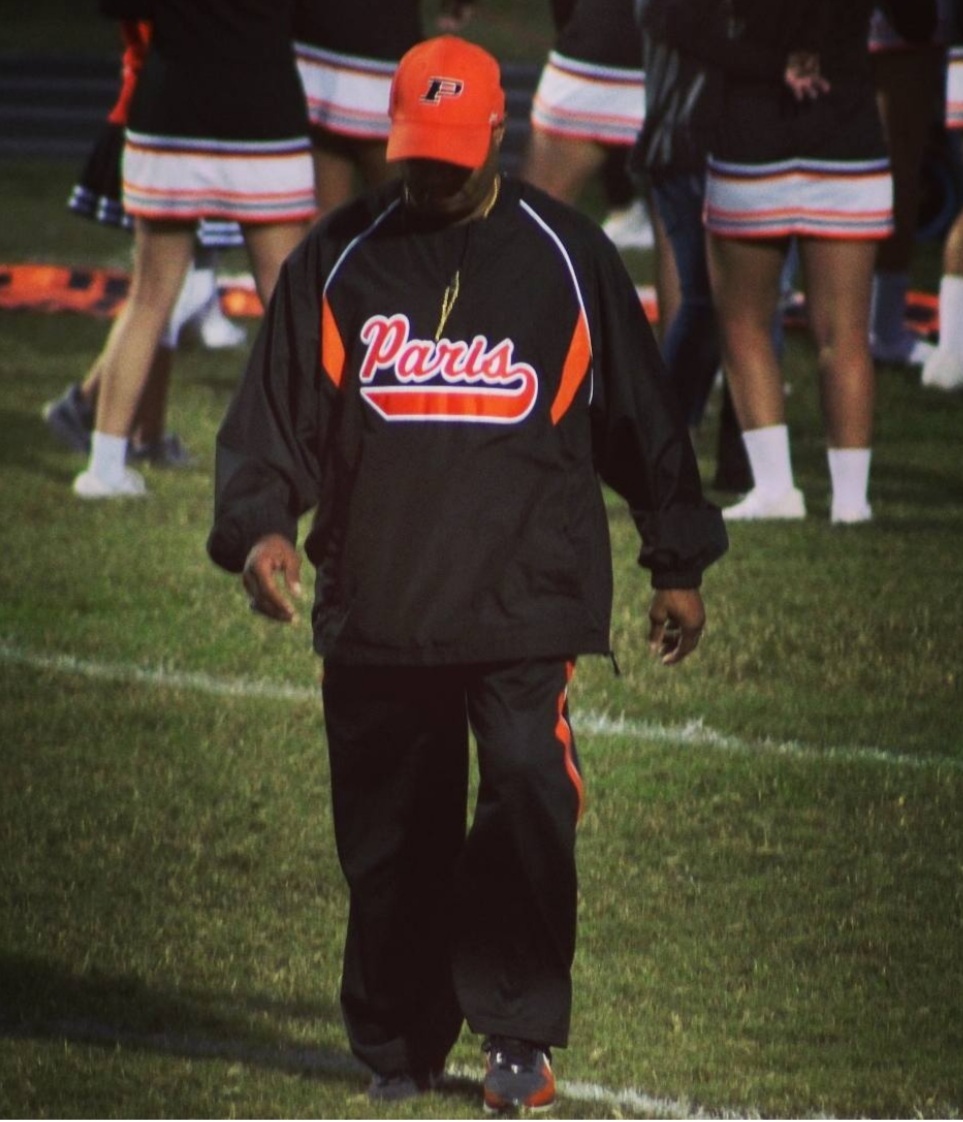 Ivan knows Coach Tyquan will have his work cut out for him. “He’s never coached at the high school level,” Ivan acknowledges. “But he’s young, energetic, with a lot of spirit, just a lot of upside,” Ivan explains. The Doctor actually sees Coach Tyquan’s youth as his main strength. “He’ll go out and work. He’ll get the kids out,” Ivan predicts. “People can take any negativity somewhere else—they need to give the man a chance. I’ll support him 1,000 percent. Besides, he’s family, and you always back your family.”

The Doctor of Sports agreed to this interview, primarily as a vehicle for giving thanks to the many people who continue to support him with texts, emails, calls and cards. And most of all, with prayer. He says his faith has been a big constant throughout his life, and certainly as he has tackled his battle with cancer. An active member of St. Paul United Methodist Church here in Paris, Rice gave an inspirational talk there last Sunday as part of “Men’s Day.”

And though he playfully admits to a serious pro-Paris bias at the beginning of his journalism career, he’s proud to say he’s aggressively covered all the local schools over the years. “The nurse who prepped me (for surgery) at St. Joe’s told me I coached her son in little league football in Lexington,” he recalls. “And two more nurses told me they played softball for Bourbon—so I’m sure glad I treated Bourbon County sports so well all these years,” he laughs. 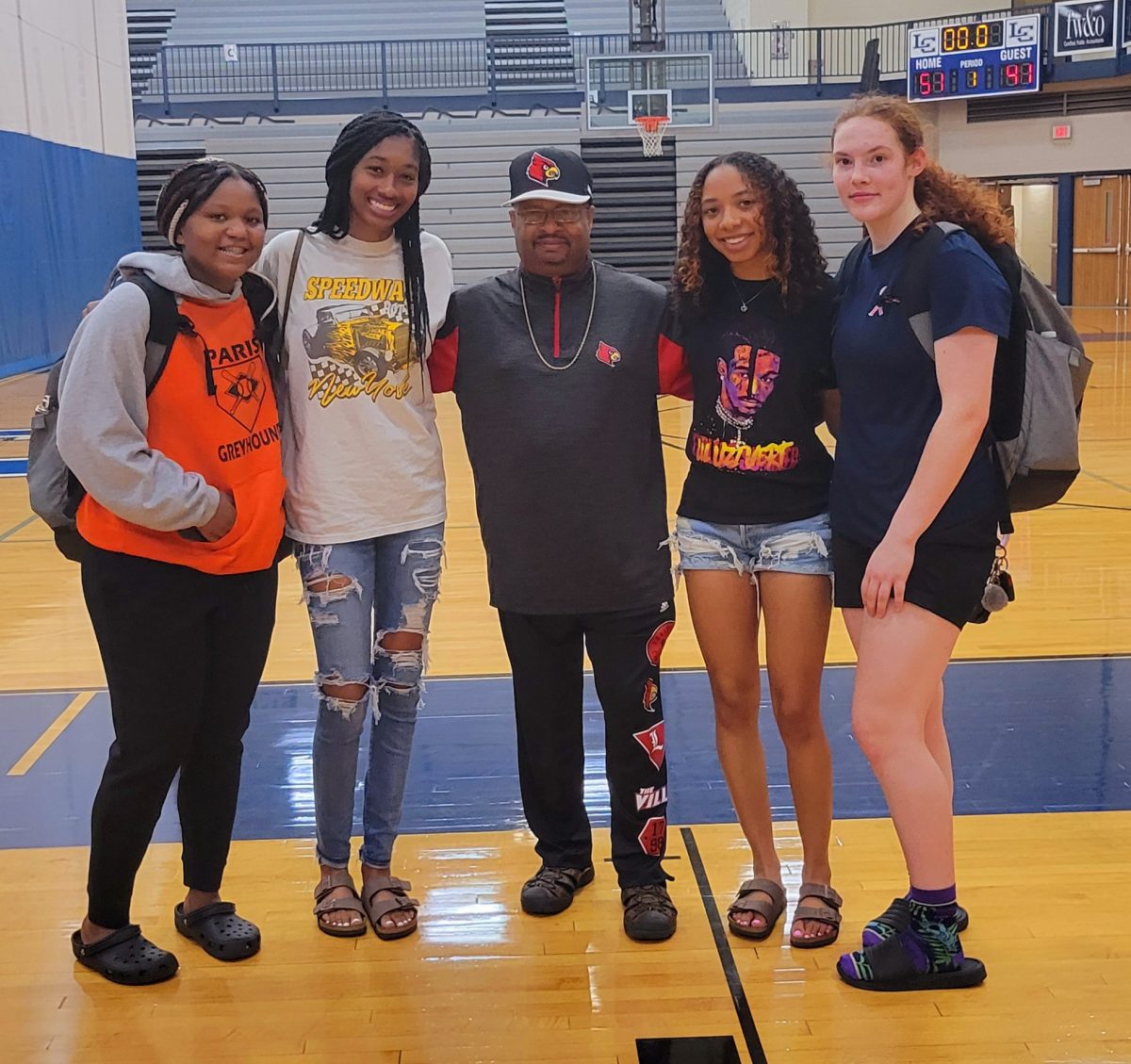 Former BCHS baseball coach Larry Conrad will attest to The Doctor of Sport’s well-earned reputation for unbiased reporting. “If there were a Mount Rushmore of Bourbon County sports, they need to put him (Rice) up there,” Conrad said in a recent phone interview. “Ivan Rice is a friggin’ legend. He keeps everyone in town informed on every sport,” Conrad added. Rice both played against Conrad’s BCHS baseball teams, and later ended up covering Conrad’s teams as a sportswriter. With regard to Rice’s own athletic prowess, Conrad said “He’s the fastest thing I ever saw on two feet in my entire life. If the ball bounced more than twice in the infield, he was safe at first base. From home to first, his legs turned so fast, he looked like an eggbeater–he could run like a deer.” Conrad remembers when Rice stole six bases in one game, a 1980 victory over Nicholas County, enroute to PHS’s last district baseball championship.

Here’s hoping the Doctor of Sports is still running like a deer—or a Greyhound–for years to come.

THE MAKING OF “THE DOCTOR OF SPORTS”

Born “Irvy Keith Rice”, Rice rebranded himself “Ivan” in the third grade. He’s honestly not sure where he came up with that name. But somewhere over the years, he thinks maybe he made the change official.

Somebody else named him “The Doctor of Sports”. 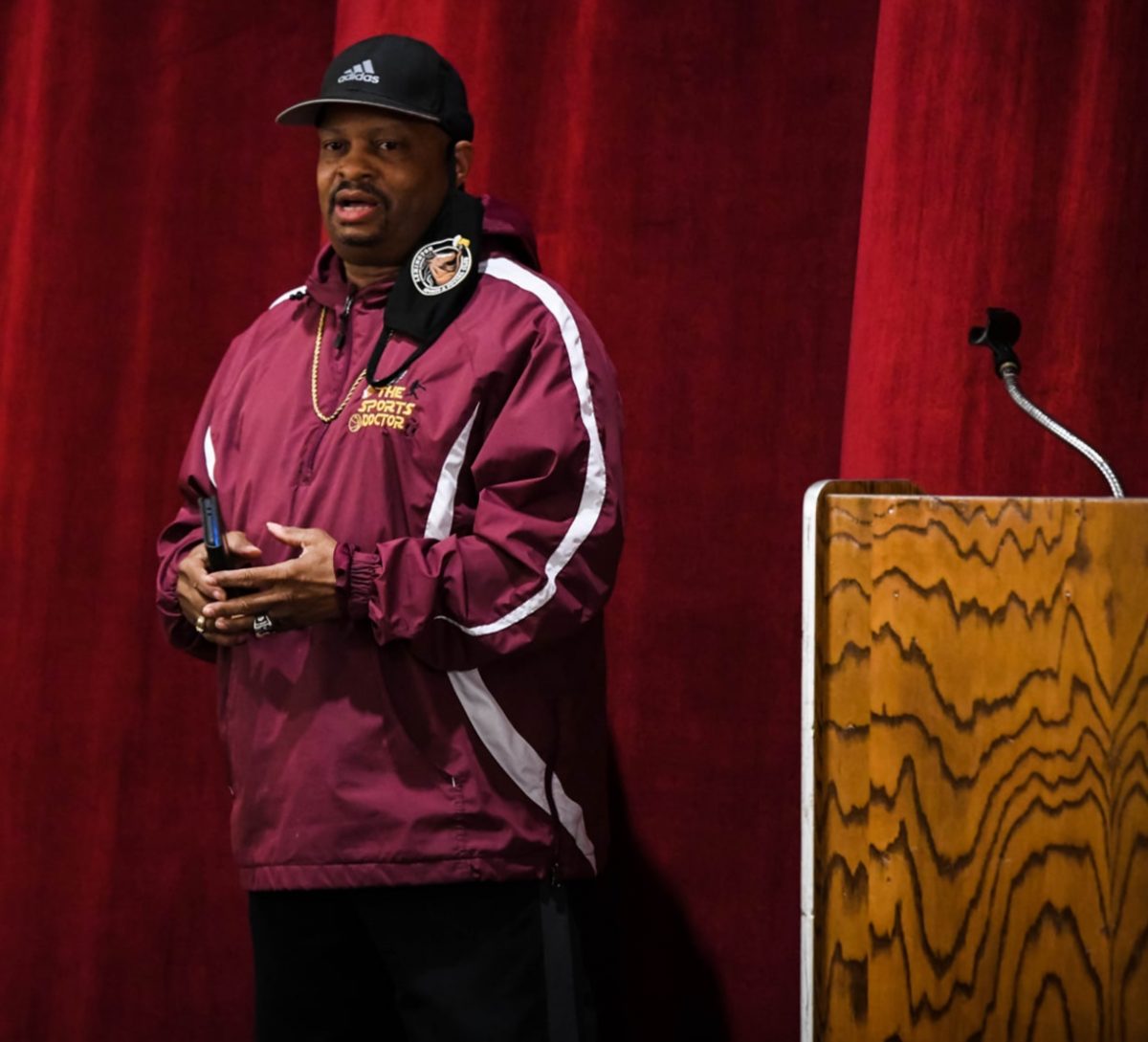 It was his Paris Middle School classmate and teammate Gary Brooks, who first dubbed Ivan “The Doctor of Sports”. I was always really good at math”, Rice recalls. “So I always had extra class time to do sports score predictions. Gary Brooks said, Ivan, all you do is sports—we should call you “The Doctor of Sports.” And so the nickname stuck.

Rice recalls Mr. Wilder’s shop class, when everyone else was making furniture, he was building a tote board for recording the records of “every high school football team in the state.”

Rice was a multi-sports star at PHS himself, playing football, baseball and basketball. He was also a track phenom, holding the school record in the 100 meters, until Lanie Fomas broke it in 1987. He played football for both Homer Goins and Randy Reese, two legendary PHS coaches. He remembers there were 70 players—including 18 seniors– under Coach Reese. His entire family is athletic; little sister Yvette was part of school records—which still stand–in the 880 and mile relays, big brother Dwayne is PHS softball coach and brother Terry was part of the unforgettable Greyhounds state championship (1981 and 1982) backfields which also featured Robert Maggard, James “All Time” Clark, Sr. and (the late) Kevin Ayers. Terry later was a PHS middle school football coach.

When still in high school, Ivan remembers local newspaper publisher (the late) Larry Brannon banning him from the weekly college football game contests, “…because I kept winning them all!” But in 1984 Brannon approached the then 21 year-old Rice “to write ‘Paris’ sports.” Rice finds it funny that today he’s the guy who designs those same weekly college football contests for that same newspaper. 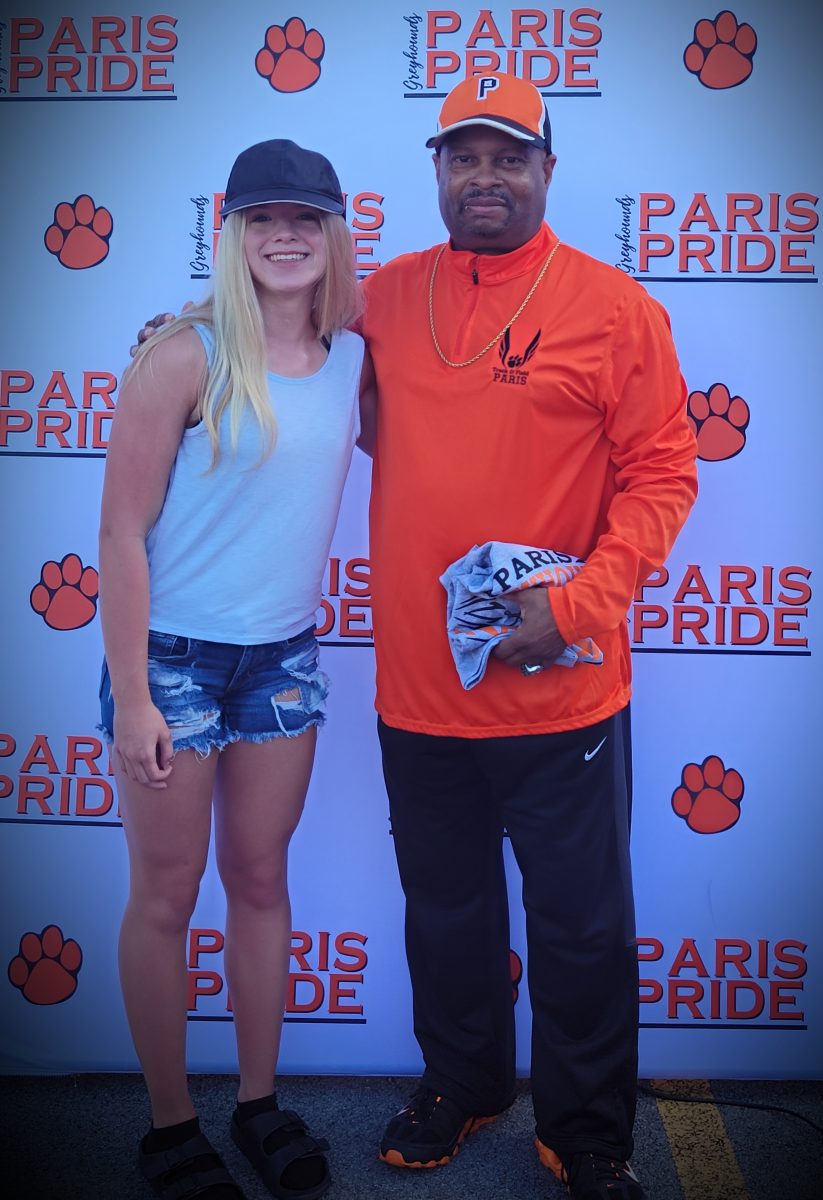 Over the years The Doctor has earned a reputation for unbiased sports coverage of all local schools. “I love that guy (Rice), says Bourbon County Middle School Principal Travis Earlywine, a PHS grad who went on to star in both basketball and tennis at Berea College. ”He doesn’t just cover football and basketball, he covers all sports, girls and boys—and he’s one of the funniest guys I’ve ever met. Seriously, except for being a Louisville fan, I love everything about that guy!”

“I’m there to support all the student athletes, in all the sports,” Rice agrees. “Even Nicholas County, because I’ve got a lot of friends down there, including several subscribers.” Actually, Rice the sportswriter has friends all over this part of Kentucky. He’s a member of the “10th Region Hall of Fame”. His writing also got him named to the PHS Softball Hall of Fame, and he’s won numerous Kentucky Press Association awards for journalistic excellence. As an athlete, he’s part of the Greyhound All-Sports Hall of Fame.

So it’s fair to say over the past 35+ years, “The Doctor of Sports” has essentially become a household name in and around Bourbon County. “Somebody even tried to get my Twitter handle recently,” The Doctor laughs. 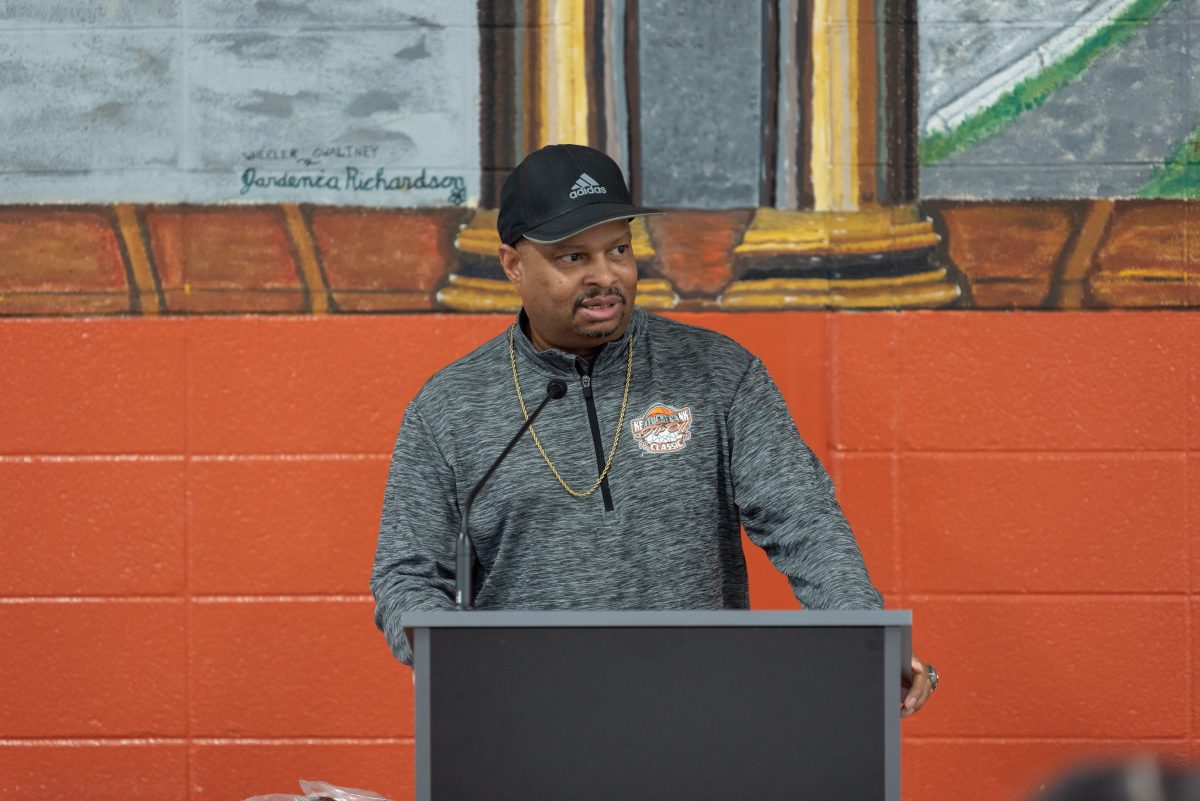