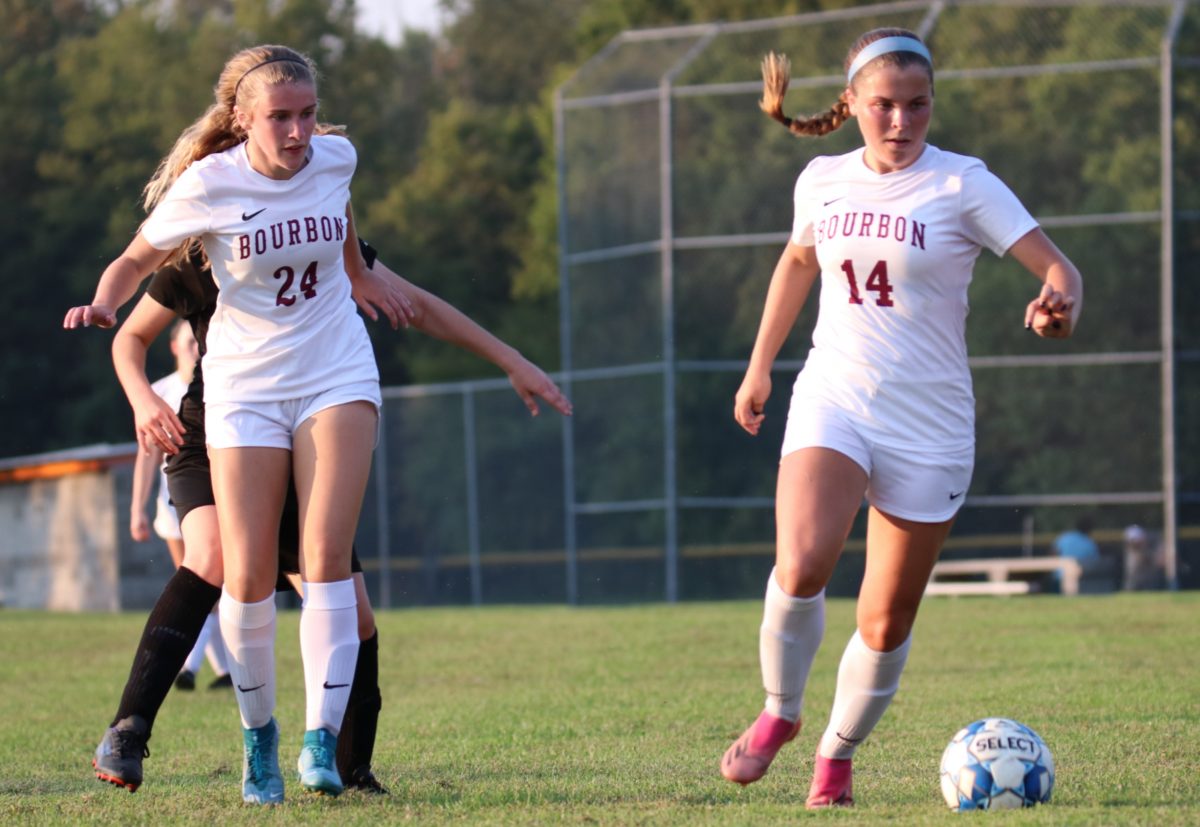 The score was tied early into the second half 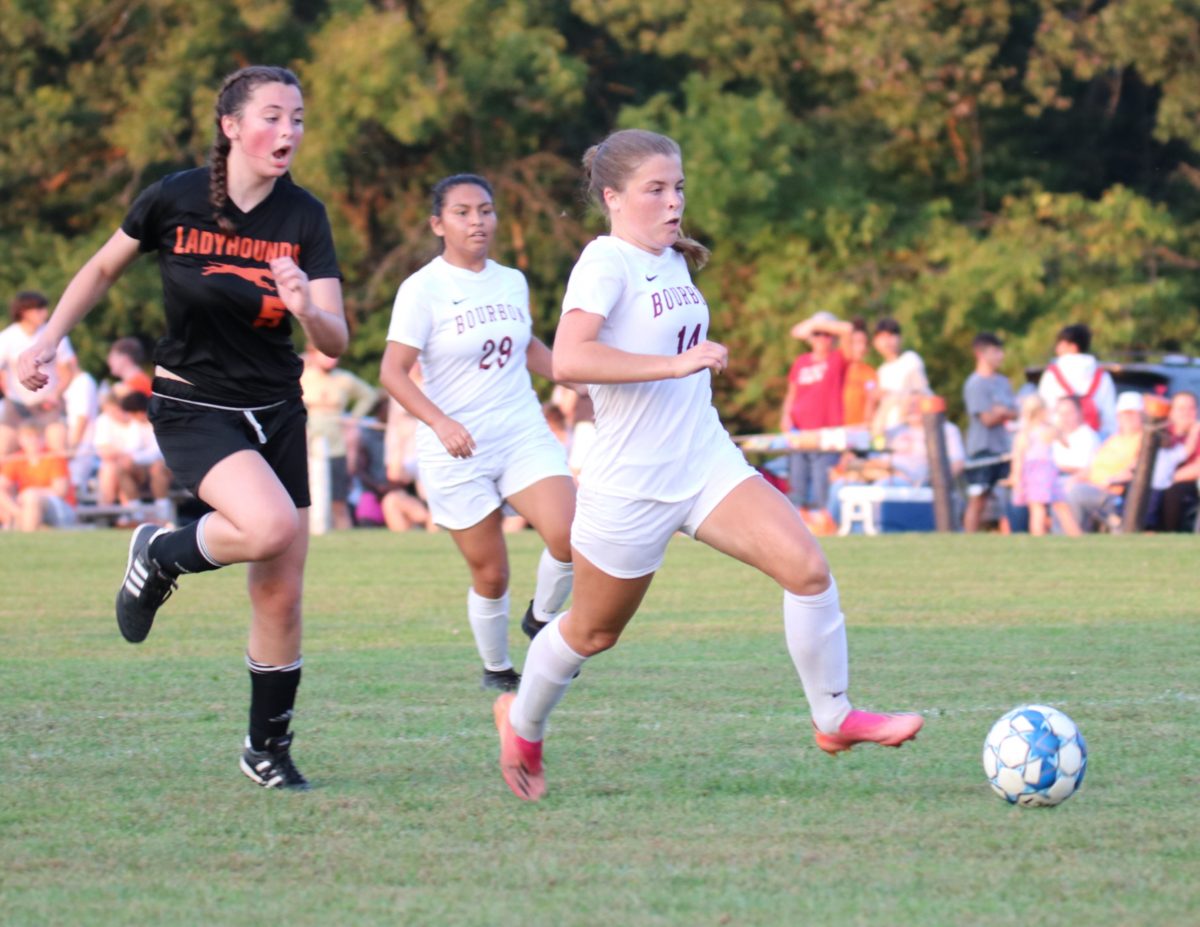 PARIS, KY – The Bourbon County Lady Colonels made the short journey over to the Paris Athletic Complex on Monday evening to take on the Paris Ladyhounds in a 40th district crosstown rival soccer showdown.

With Coach Braden Powell’s Ladyhounds playing the entire game with 11 players and zero subs, Bourbon’s Coach Reagan Crossfield had the luxury of sending in fresh players throughout the game, which turned out to be pivotal as Bourbon used those fresh legs to wear down the Ladyhounds in the second half to pull out a 5-2 victory.

Bourbon grabbed the early 1-0 lead when junior Lilia Steen fought her way through two Paris defenders to slip the ball past Ladyhound junior goalie Jamie Cowan at the 28:00 mark of the half.

The score remained that way for the rest of the opening 40 minutes, as Cowan hauled in 13 saves as the Colonels attempted 16 shots. Paris finished the half with just three shots at goal, with one coming from junior Chloe Kemper, who saw her shot attempt at the 5:16 mark bounce over BC’s senior goalie Molly Bishop outstretched arms but the ball grazed the top of the bar and that allowed Bishop to secure it and take away a sure goal by Kemper.

After the near miss to end the first half, the second half started with a bang for Paris, as Kemper, just two minutes into the half, took the past from junior Sanaa Jackson and dribbled her way past two Bourbon defenders just before she nailed the ball past Bishop, who left the goal in hopes of slowing down the Ladyhounds’ top scorer.

Paris’ momentum, however, was short lived. 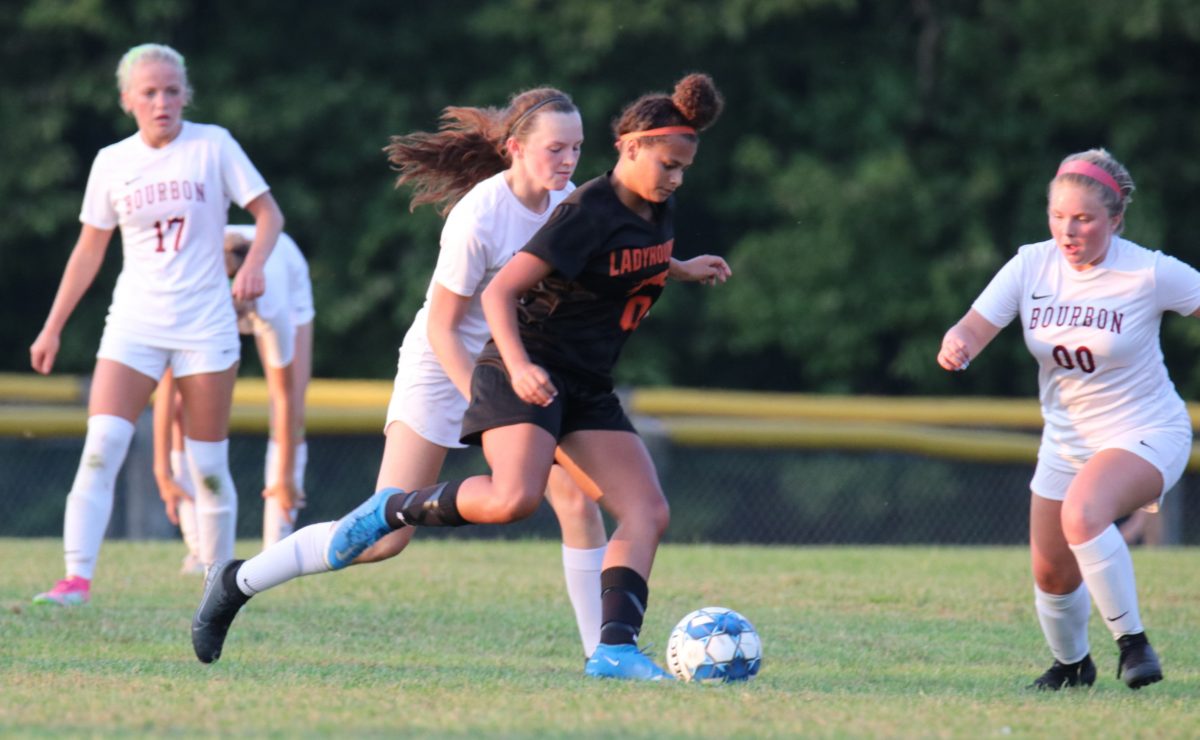 Senior Elizabeth Toohey started Bourbon’s scoring spree with a goal from about 25 yards that sailed over the head of Cowan to make the score 2-1.

Thanks to a handball by Paris, the Lady Colonels scored again on an indirect free kick that saw Erin Cain slide the ball in the net after taking a nice assist from Steen at the 30:00 minute mark, pushing the Lady Colonel margin to 3-1. Shortly after that goal, Steen found a gap in the Paris defense and fired a shot from the top of the box in the 27th minute to make it 4-1.

Following another handball by the Ladyhounds, senior Addison Hensley nailed a boomer in the back of the net on a direct kick to give Bourbon a 5-1 lead with 3:30 left in the contest. 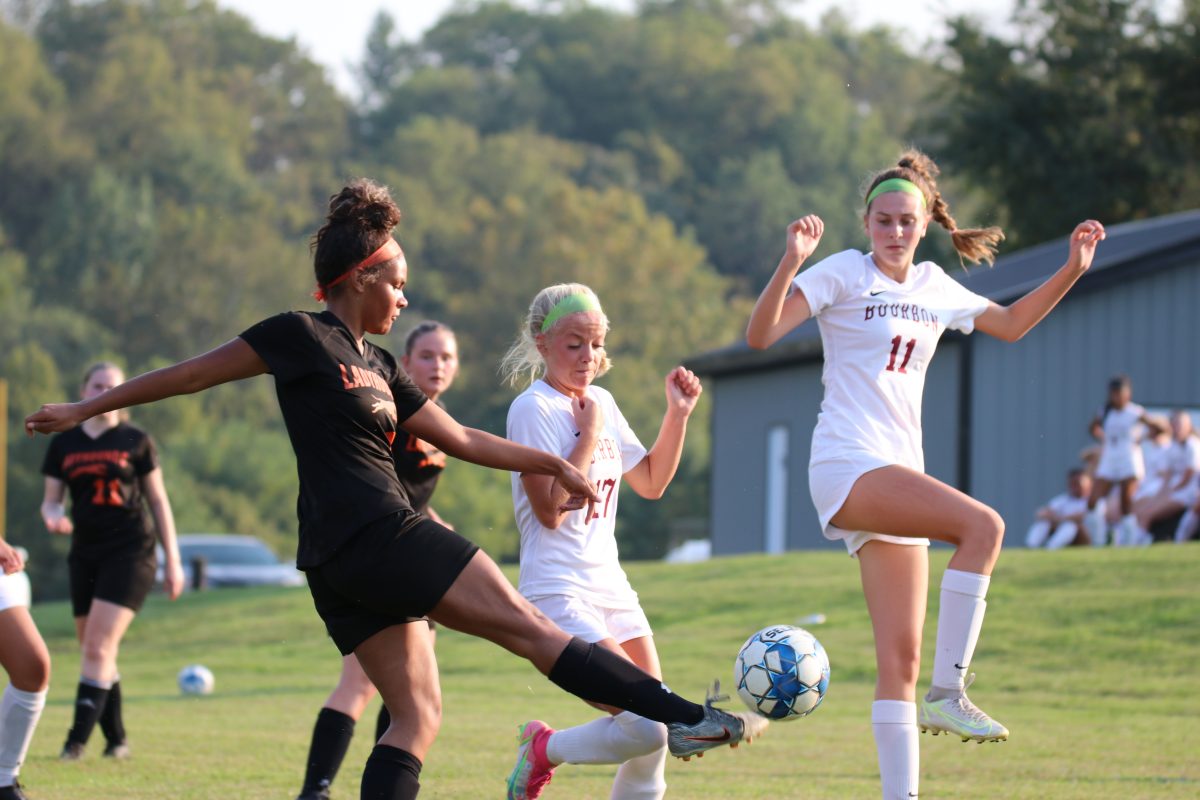 Paris’ final score of the evening came at the 2:45 mark when Kemper connected on the direct kick that sailed over the Bourbon defense into the goal.

Cowan finished her evening with 23 saves on 35 Lady Colonel shot attempts at goal. Bourbon goalies Bishop and sophomore Natalie Shelton teamed up to have three saves off seven Paris shot attempts to help their team pull out their 12th consecutive victory over their rival. 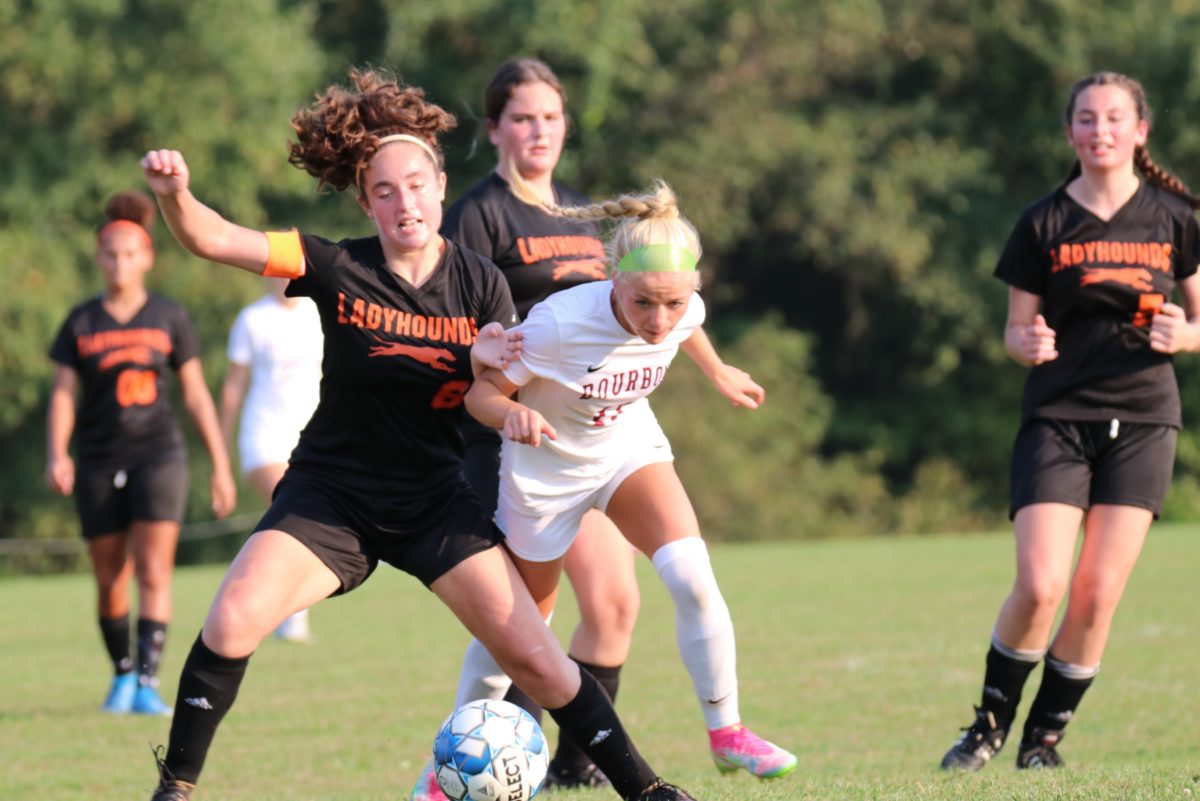 On a brighter note for Paris, it was the first time a Ladyhound soccer team has scored on a Lady Colonel team since October 13, 2014, after being outscored 45-0 prior to Monday’s meeting.

Paris (2-6-1, 0-2) will travel to George Rogers Clark tomorrow and will stay on the road Monday when they travel to Mason County. They will return home next Wednesday to host Powell County. 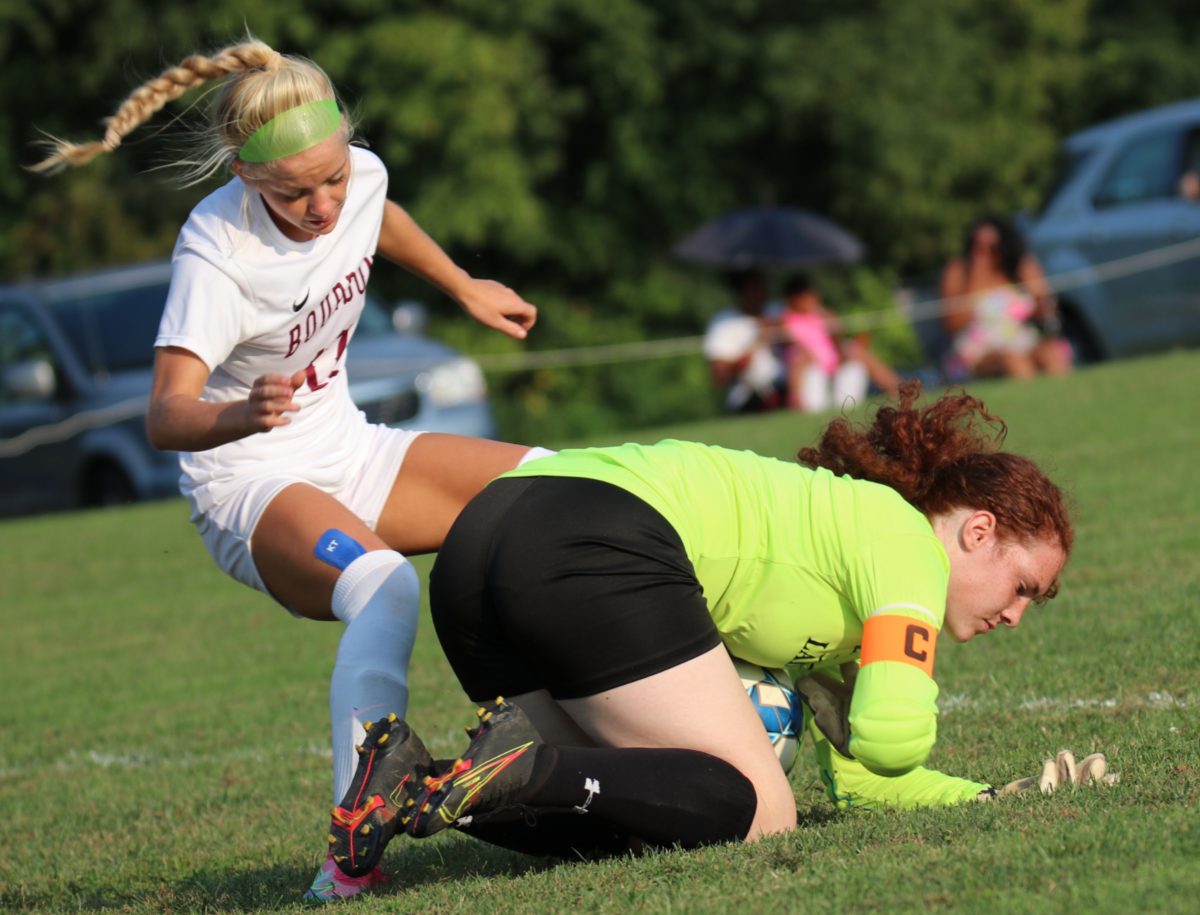 ALL PHOTOS TAKEN BY JENNIFER ARNETT … for PHS Athletics!