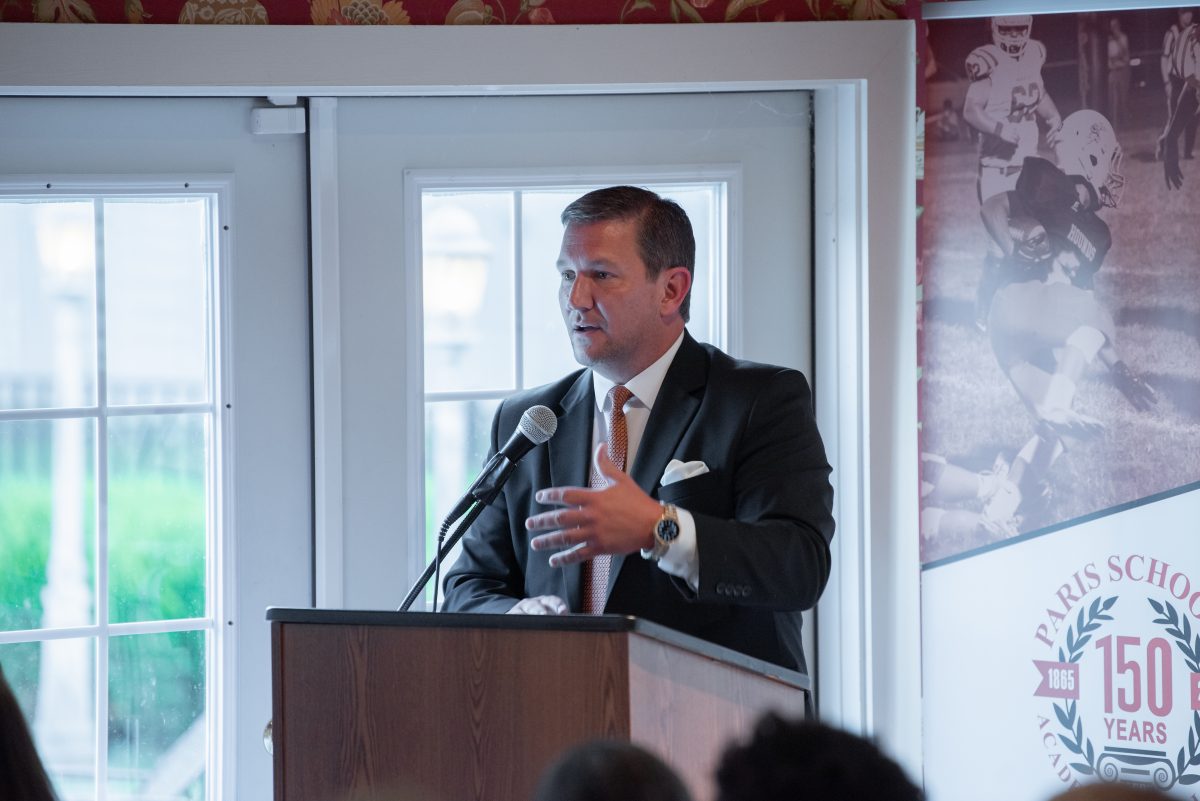 GUEST SPEAKER – Brian Milam, Sports Director at WKYT, was the guest speaker for this year’s Greyhound Hall of Fame banquet that was held at the Barr House Inn last month. Six new members were inducted into the Hall of Fame that evening.

They joined a slew of other former athletes, coaches and contributors

PARIS, KY – In a special ceremony that was held at halftime of the Paris Greyhounds versus Fleming County football game at Blanton Collier Stadium last Friday evening, six new members were inducted into the 28th Paris High School Greyhound Hall of Fame for their outstanding years on and off the field/court during their days of walking the halls at Paris High School.

The Paris Greyhound Hall of Fame honors as inductees, different people each year that have contributed to the athletic and academic tradition of Paris High School, in addition to having a positive effect on those around them. 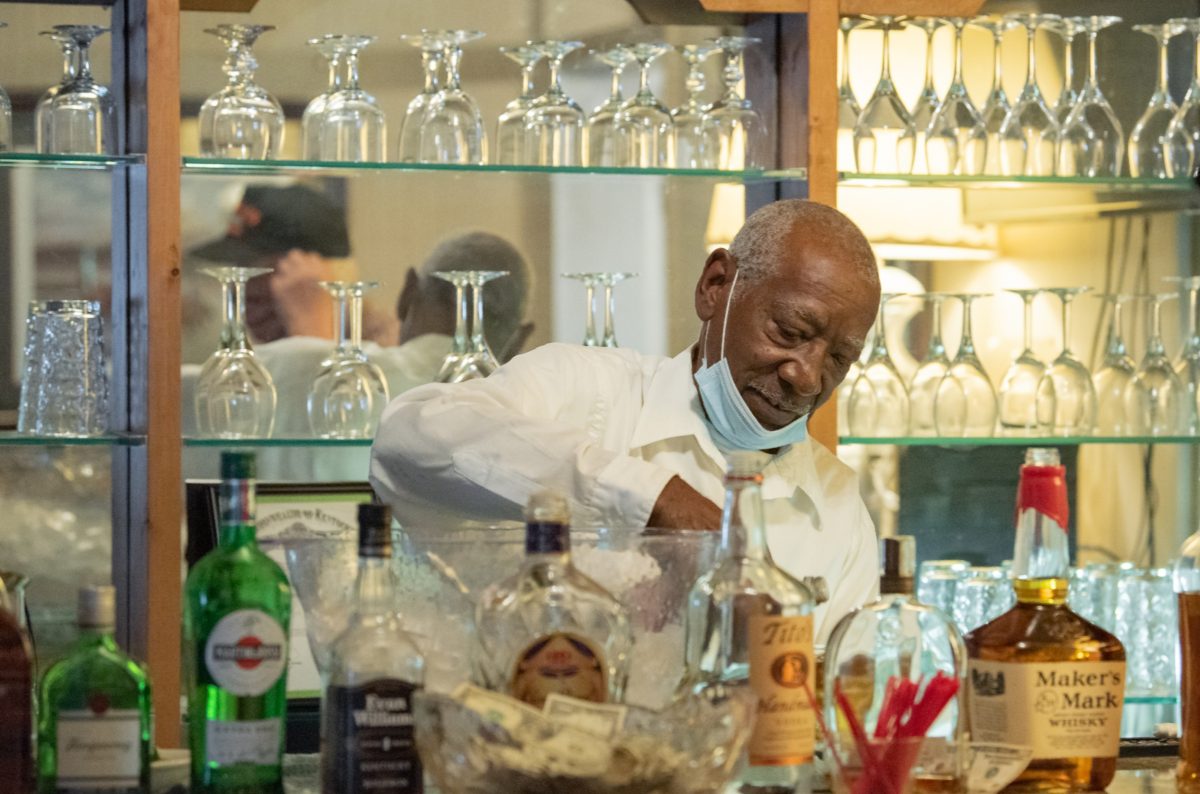 This year they have six outstanding individuals who they felt reflect and personify the sterling qualities that have been honored since the Greyhound Hall of Fame was set up in 1983. Inducted were Lindrell Blackwell, class of 1981; Chris Garrison, class of 1995; William Jacobs, class of 1978; Ashley Garrard, class of 2002; Rhonda Wilkerson Musser, class of 1977; Paul Sullivan, class of 1962. 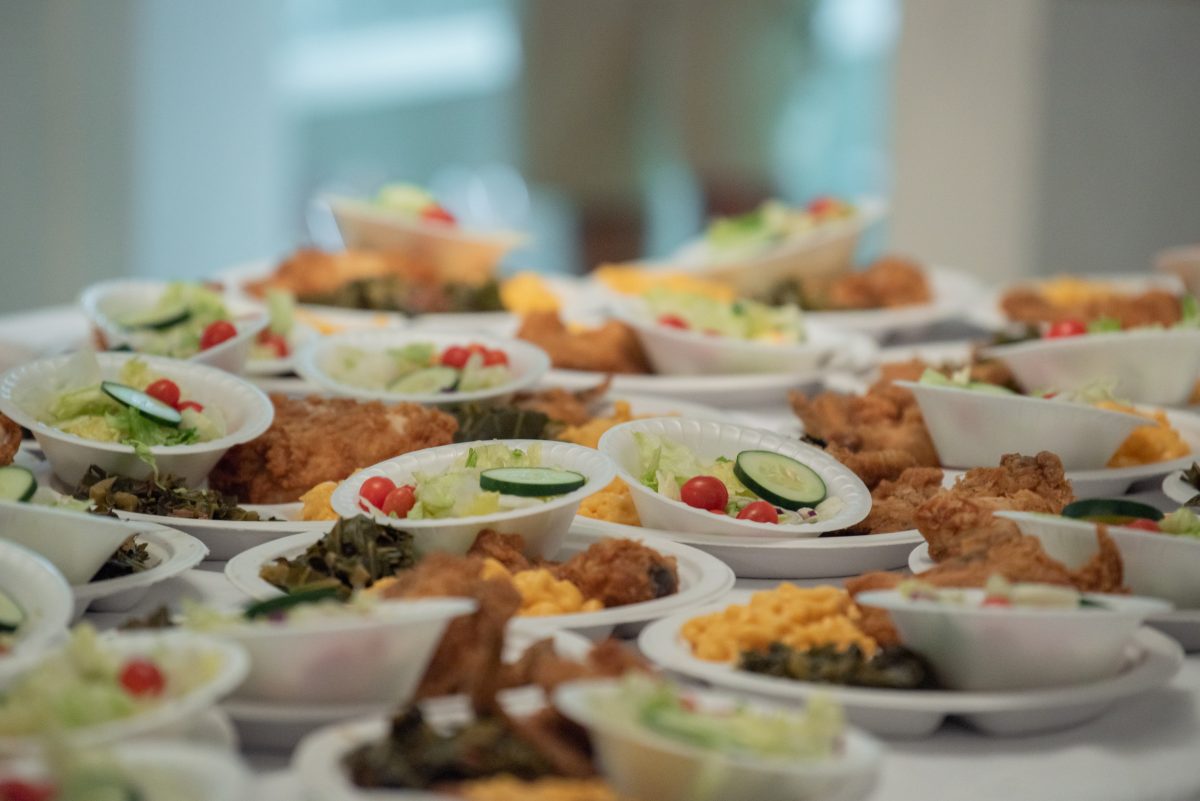 On this night (September 24, 2021), they honored these individuals for exhibiting qualities of fine athletic achievements and/or community support and valuable contributions to Paris High School. The efforts of the new inductees, along with those of earlier induction classes, are helping to perpetuate the strong tradition and pride associated with Paris High School.

While attending PHS, Lindrell represented the Greyhounds on the basketball court for four years and was a starter his senior year. He was also a star member of the Greyhound track team for five years, leading them to a 1981 region runner-up finish and 7th in the state. His junior season, Lindrell was state runner-up in the 300 meter hurdles and then returned his senior year to win the state title in the same event, setting a new state record in the event at the time. In addition, Lindrell was state runner-up his senior year in the 200 meter dash. In 1980, he set the school-record in the 300 hurdles with a time of 38.64, which still stands today. 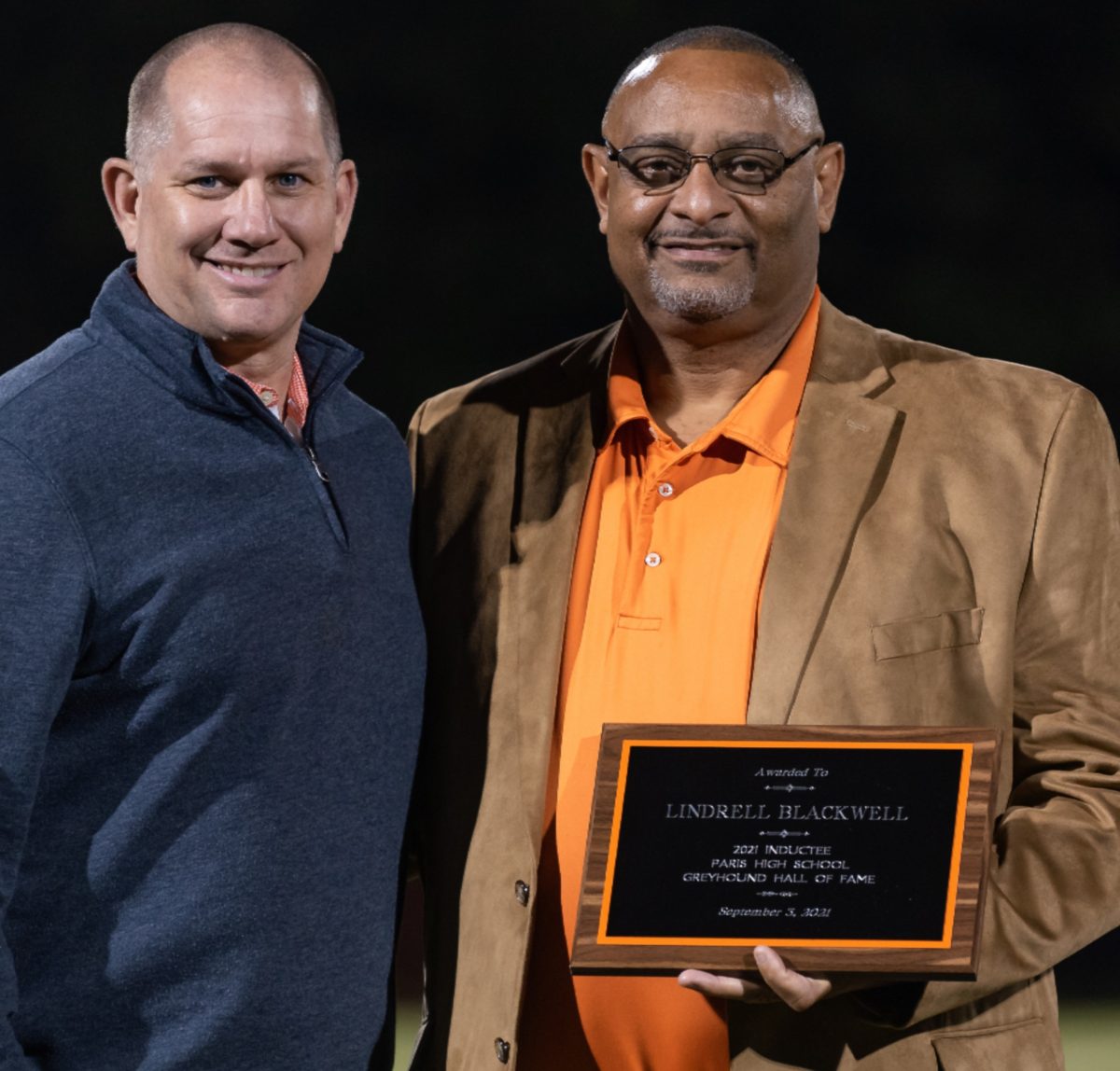 After graduating from Paris, Lindrell attended the University of Kentucky where he received his B.S. Degree in Family Studies. While at UK, he initially was a walk-on for the track and field team but by the end of his freshman year, he was awarded a track scholarship. Lindrell specialized in the 400 meter hurdles and also was the anchor on the mile relay team. He received enough points to be awarded a UK letterman’s jacket. He was part of the track team from 1981-1983. Due to an injury, he was unable to perform his senior year.

Lindrell enjoys genealogical research and writing stories. He also serves on the Board of Mary C. Brooks Place and is on the Board of Bluegrass Heritage Museum. He retired from the Commonwealth of Kentucky as a Supervisor for the Department of Juvenile Justice in 2018.

Lindrell is married to Sandra Blackwell and they have a son, Christian who is a junior at Paris High School.

While attending Paris, Chris represented the Greyhounds on the football field and the baseball diamond. He was a four-year letterman in football, where he earned All-State Honorable Mention honors his junior year and was the team captain his senior year. He was also a five-year letterman in baseball. 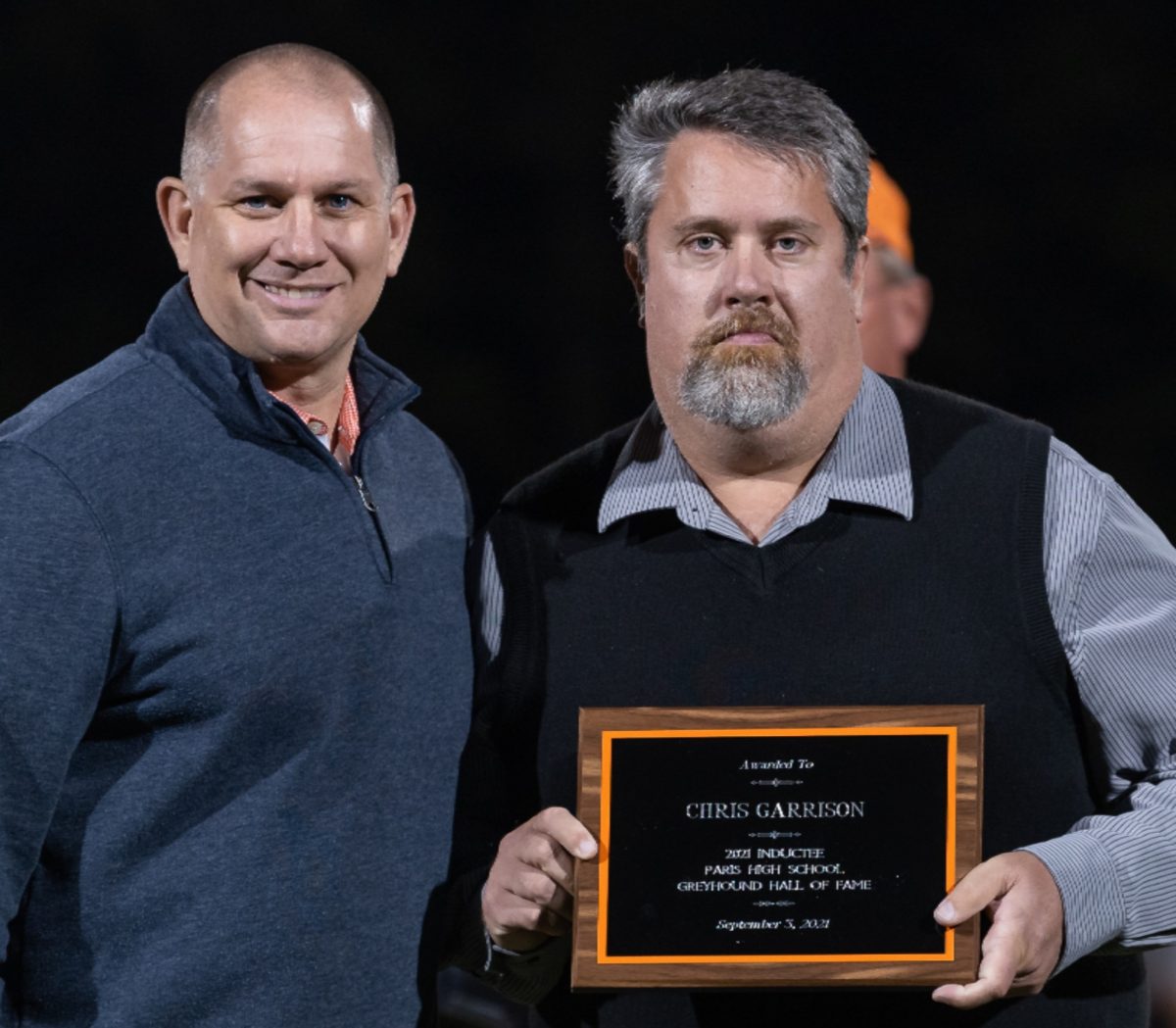 Chris has been married to his wife Bree for 21 years and they have three sons (Grant 18, Samuel 15, and Jack 10). They all attend the Woodford County school system.

Chis has worked at Orbis Corporation for 25 years and is currently Plant Scheduler.

William represented the Greyhounds on the football field his freshman year, basketball court for four years and was a varsity starter his junior and senior years. He also ran track for two years as a member of the mile relay team. 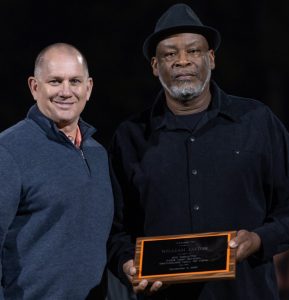 At Paris High School, William received the following honors in basketball: Most Improved, Most Rebounds, Leading Scorer, MVP, and selected to the All District, All Region and All State Honorable Mention teams.

After graduating from Paris, William received a basketball scholarship to Georgetown College, where he played for four years, becoming a starter his senior year. He won the 100% Award and was a Co-Captain.

William would go on to be an assistant basketball coach at Morristown College from 1983-1986 and just recently retired from the United States Postal Service in 2019.

Ashley represented the Ladyhounds on the basketball court for six years.

While playing basketball at Paris, the girls basketball team won the All “A” 10th Region Tournament in 2002, where she was named to the All-Tournament and the All-Academic team. Ashley, the 14th leading scorer in Ladyhound history, was Co-MVP of the 37th District and was awarded the District Player of the Year her senior season.

After completing a successful high school career, Ashley went on to the University of Illinois at Chicago on a full basketball athletic scholarship, and still today, she’s the last Ladyhound basketball player to sign at a Division I School. 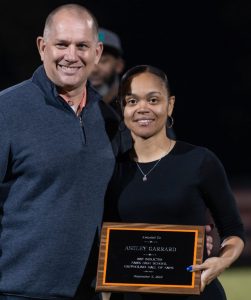 Following college, Ashley, who was inducted into the 10th Region Basketball Hall of Fame in 2014, started her coaching career under her father, Maurice Garrard in his summer AAU Program, one that has aided placing numerous girls and boys into college since 1993.

Currently, Ashley is the head girls basketball coach at Paris Middle School, which she has held for the past three seasons. And just recently, she was named the new head women’s basketball coach at Henry Clay High School. She is also Director of Basketball Operations and Head Girls Basketball Coach of the Central Kentucky Storm AAU Program. In addition, she was an assistant coach, head junior varsity coach and head freshman coach for the Ladyhounds. During this time, her freshman team was able to capture the freshman girls district and region championship titles.

During her time at Paris, Ashley has been privileged and honored to help develop mentally, physically, and academically, several individuals into 10th Region All Tournament and All State Candidates.

Ashley is the mother of Asja-li Garrard, 17 and Bryant Dumphord, 6 and engaged to William Wells.

After graduating from Paris, Rhonda attended Eastern Kentucky University, graduating in 1981 with a B.A. Degree in English and an Art minor. While at EKU, she furthered her gymnastics career, competing for the Colonels and qualified for the National Championship three out of the four years there. 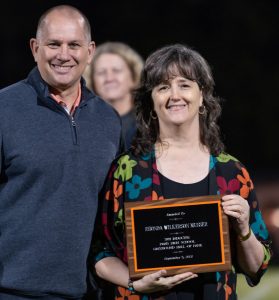 Following her graduation from EKU, Rhonda worked as a layout artist, before returning to Eastern to earned an M.A. in English. She taught ESL and directed a summer children’s gymnastics program and in  1986 she joined the EKU English Department faculty, full time.

Later after teaching in The Peoples Republic of China, Rhonda moved to Cincinnati to marry her loving husband, H.A. They have four children and enjoyed homeschooling the two youngest from Kindergarten through 12th Grade. They’re blessed with ten grandchildren. In her spare time, Rhonda enjoys watercolor painting and worshipping with their local church body.

Rhonda wants to thank her parents, Bob and Juanita Wilkerson for all of their support and love and she is grateful to God for the gift of eternal life through Jesus Christ His Son and the grace He gives to live each day.

While attending PHS, Paul represented the Greyhounds on the football field for four years, basketball court and track. He also played in the West Virginia-Kentucky Football All Star Game his senior year and would go on to receive a football scholarship from Morehead State University. 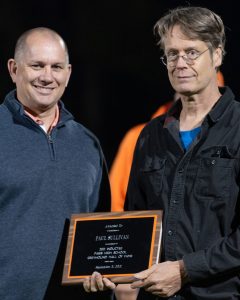 Paul graduated from the University of Kentucky with a Bachelor Degree and Juris Doctorate Degree.

Paul is a Partner and member of the Executive Committee of Frost Brown Todd Law Firm, which has offices in nine states and Washington D. C. He also served his country in The United States Air Force, where he was stationed in the Far East and is on the Board of Directors of Central Bank and Trust Company.

Paul is married to Melissa Sullivan and they have two sons and two grandchildren.

Paul’s son Jere (pictured in the photo) accepted his plaque on his Dad’s behave!

To see more photos of the Hall of Fame Banquet and the awards presentation, visit the links below:

(while there, hit browse to see the Hall of Fame banquet photos!)