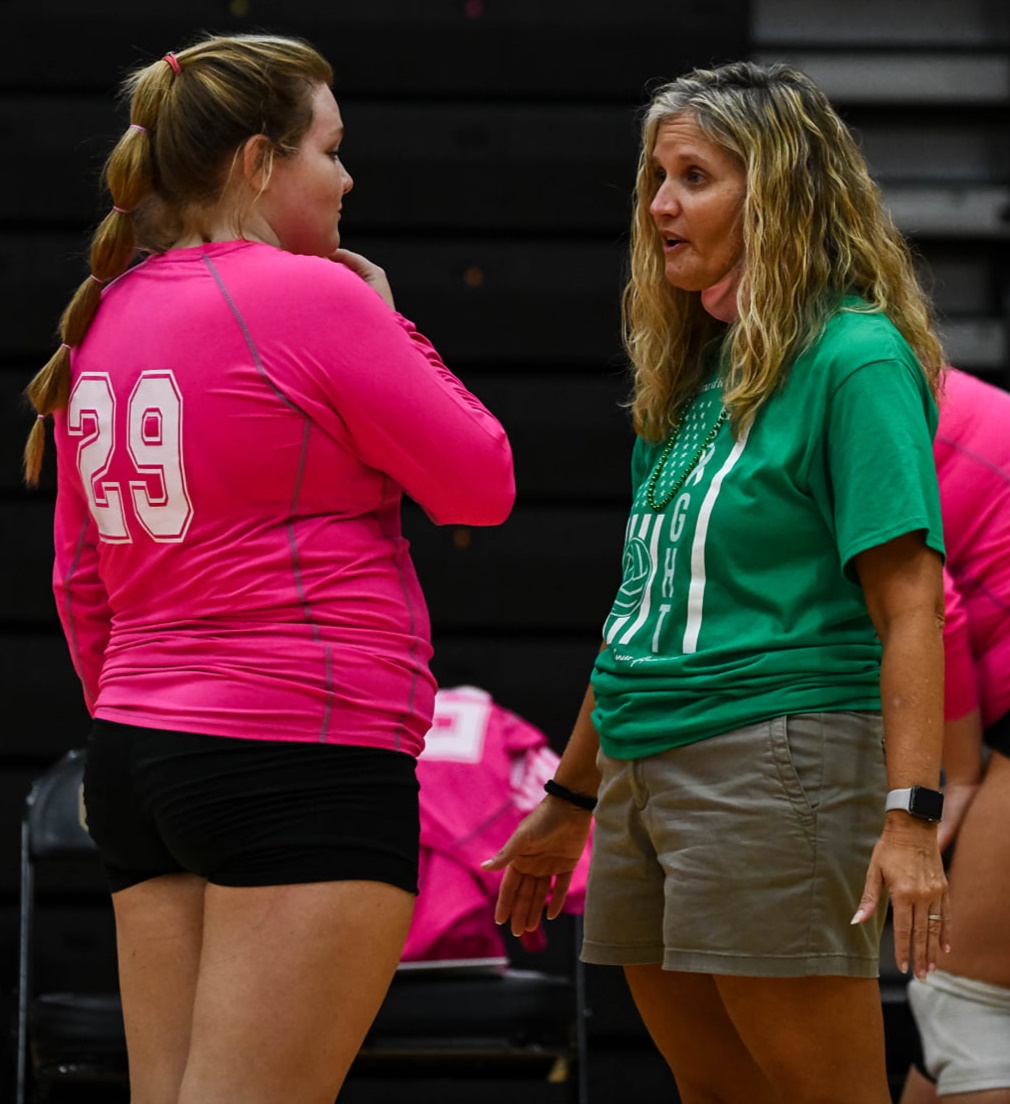 Following their epic come from behind win over Harrison County, their first over the Fillies in 18 years 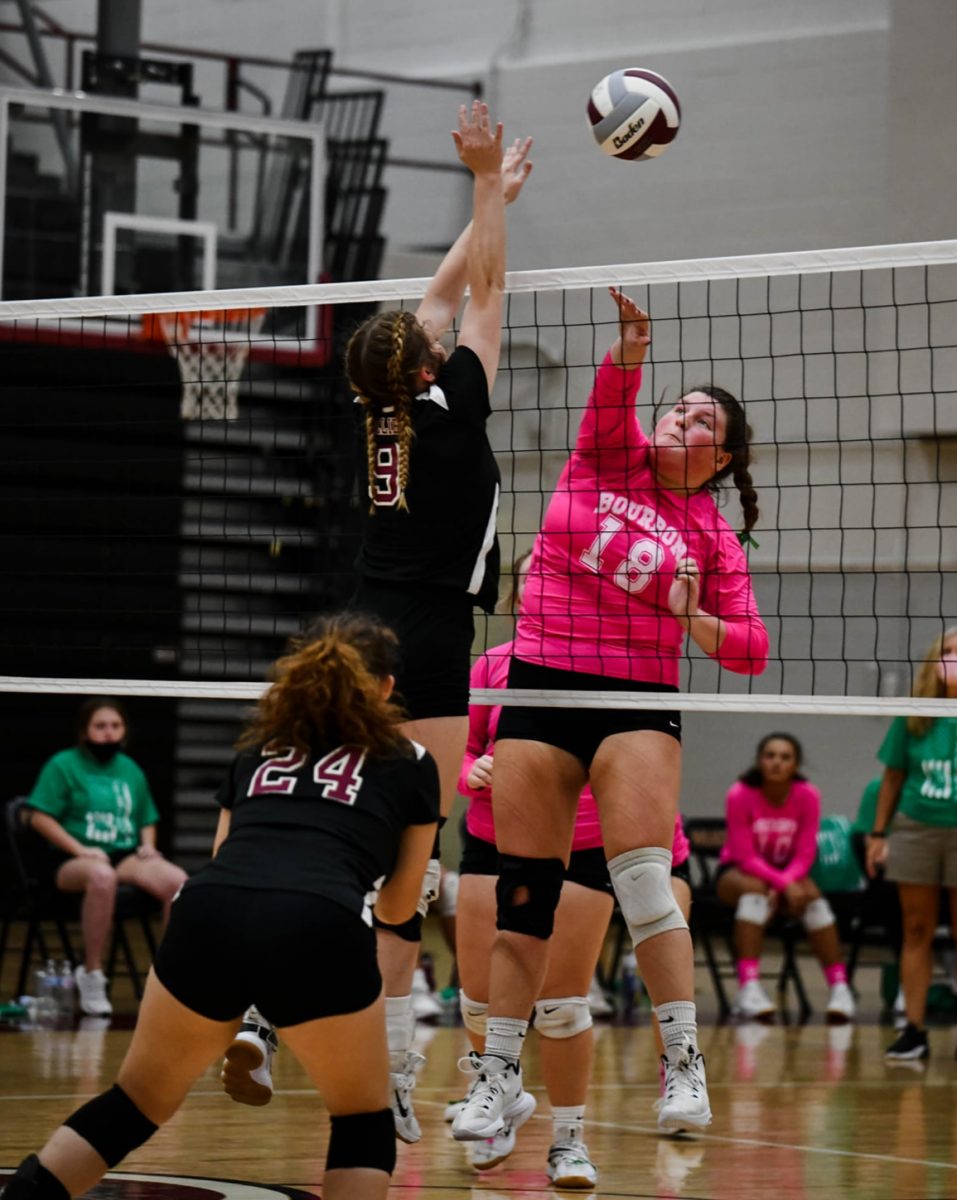 PARIS, KY – On a night that saw the team honor the late Betty Watson with a “Green Out” Coach Janet Thacker’s Lady Colonel Volleyball team celebrated their first victory over rival Harrison County in 18 years (September 9, 2003) to close out their 2021 regular season last Thursday evening inside Russ Day Gymnasium.

The win, Bourbon’s 19th of the year, has now given this year’s senior class (Allie Hill, McKenna Denney, Rylee Brown) a chance to make this a very historic season by becoming the winningest senior class in the history of the program if they can pull off a victory tonight against George Rogers Clark in the semifinal round of the 40th District Tournament.

The 2021 Lady Colonel senior class has tied the 2019 class with 63 wins over their four-year career. A 20th win will also mark just the second senior class to win at least 20 games in a season, which will equal the 2019 senior class. Had it not been for a shortened 2020 season because of Covid, this year’s seniors would’ve already eclipsed the record, while gazing at their third 20 win season but they do have the luxury of knowing they’re the first senior class to achieve three consecutive winning seasons.

Regardless, they still have a chance to break the record but to do so, they need to knock off GRC for a third time. 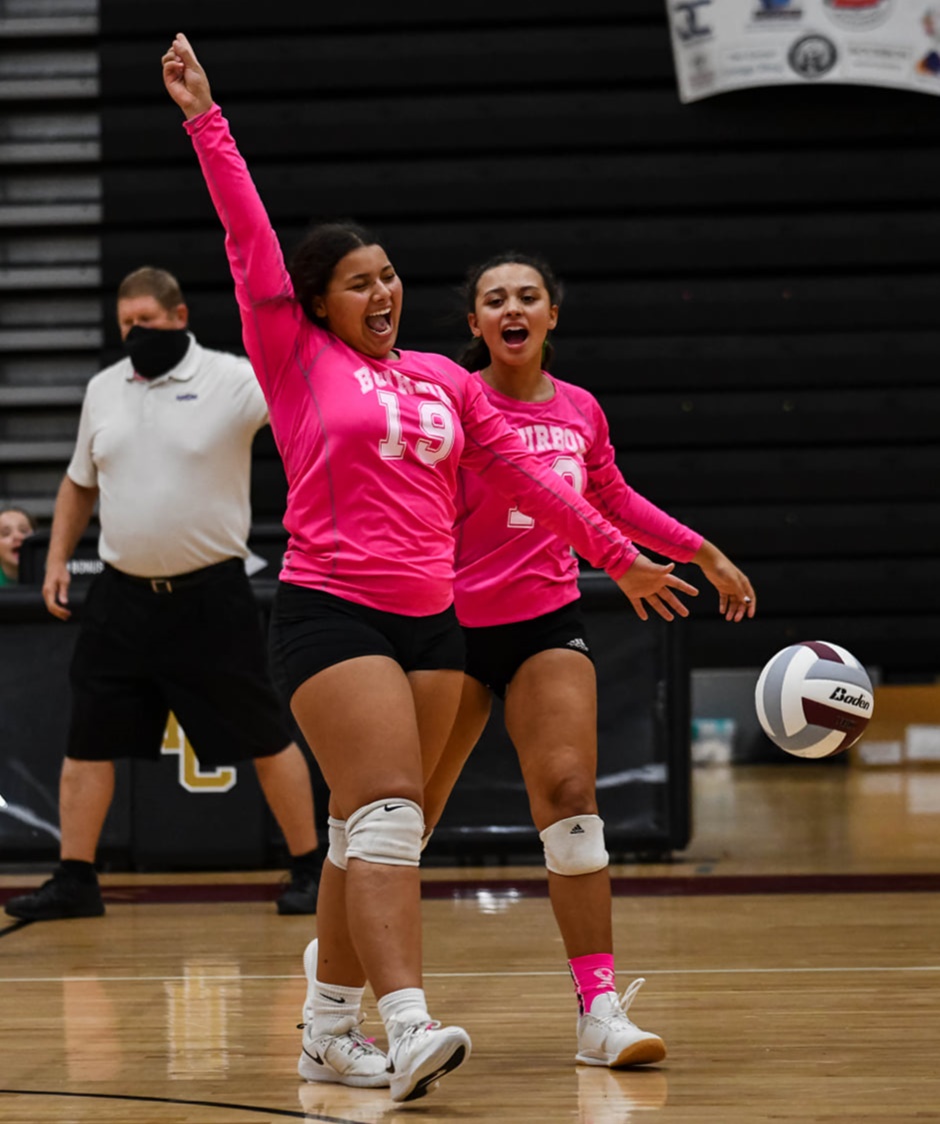 Leading the way for the Lady Colonels over those two games was sophomore Bethany Simpson, who recorded 18 kills, 6 service aces, 23 digs and 13 assists. Also contributing was Denney with 13 kills, 5 aces and 23 digs. Freshman Maci Brown had 52 assists and 14 digs over the six games. Freshman Rylee Barnes totaled 5 kills, 21 digs and served 3 aces. Hill had 8 kills, 2 blocks and 2 digs, while freshman Taylor Bentley stat line saw her with 17 digs, 5 assists and she served 2 aces.

The district tournament game will start at 6:00 this evening at Montgomery County High School. The winner of the BCHS/GRC match will play in the championship game tomorrow night against top seed Montgomery County (23-11, 4-0), which is also scheduled for 6:00.

Despite having late leads, Bourbon County dropped the first two sets against Coach Bill Faulkner’s Fillies but instead of hanging their heads and quitting, Thacker’s Colonels roared back behind senior leaders Allie Hill and McKenna Denney to win the next three games to pull out the miraculous come from behind stunning victory last week in Paris

“Allie and McKenna were our leaders,” said a very happy Coach Thacker afterward. “However, it was a total team effort and we couldn’t have won without all girls, even Kendall (Fowler) that never left the bench!”

Harrison, who came into the contest ranked No.2 in the region, has pretty much owned the Lady Colonels in volleyball and the numbers don’t lie. During their 23-game losing streak against the Fillies, Bourbon had won only 6 of the 49 sets played over the past 18 years, just showing one how dominate Harrison has been during this series and how big the win was for Bourbon County. 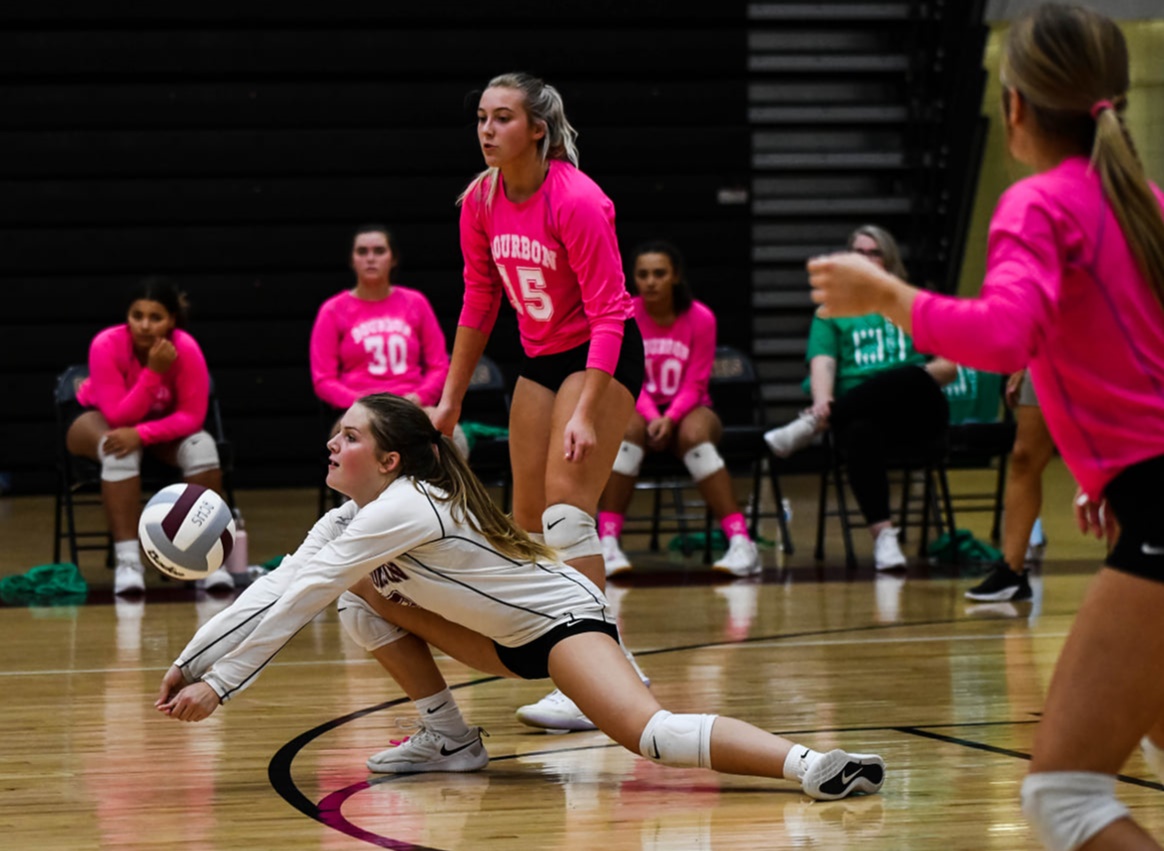 Bourbon led 24-19 in the first set and all they needed was one point to go up 1-0 in the match. Harrison, who beat the Lady Colonels 3-1 just two weeks ago, didn’t let that happen after they put together a ferocious rally to win the next five points to tie the score at 24-24, before eventually pulling out the 28-26 victory. They carried that momentum into the second set where they nearly led from start to finish to pull away from Bourbon to go up 2-0 following the 25-18 win.

With their backs against the wall and really nothing to lose, the Colonels started playing relaxed.

A block here and there by Hill, along with several kills by Denney and sophomore Bethany Simpson helped the Lady Colonels win games three (25-20) and four (27-25) to pull even with the Fillies at 2-2. Thacker’s team, thanks to a key block by Hill, some nice digs from Taylor Bentley and Rylee Barnes, as well as some great assists by freshman Maci Brown, actually rallied from five points down in game four to secure the win.

Game five saw both teams go back and forth before Bourbon (19-14) pushed ahead 14-12 on kills from Denney and Barnes. The Fillies (24-12) responded by scoring the next two points to tie the game at 14-all. Bourbon regained the lead on Harrison’s serve and then won the instant classic on Hill’s serve when she delivered a serve that wasn’t returned by the Fillies. Game over … streak over! 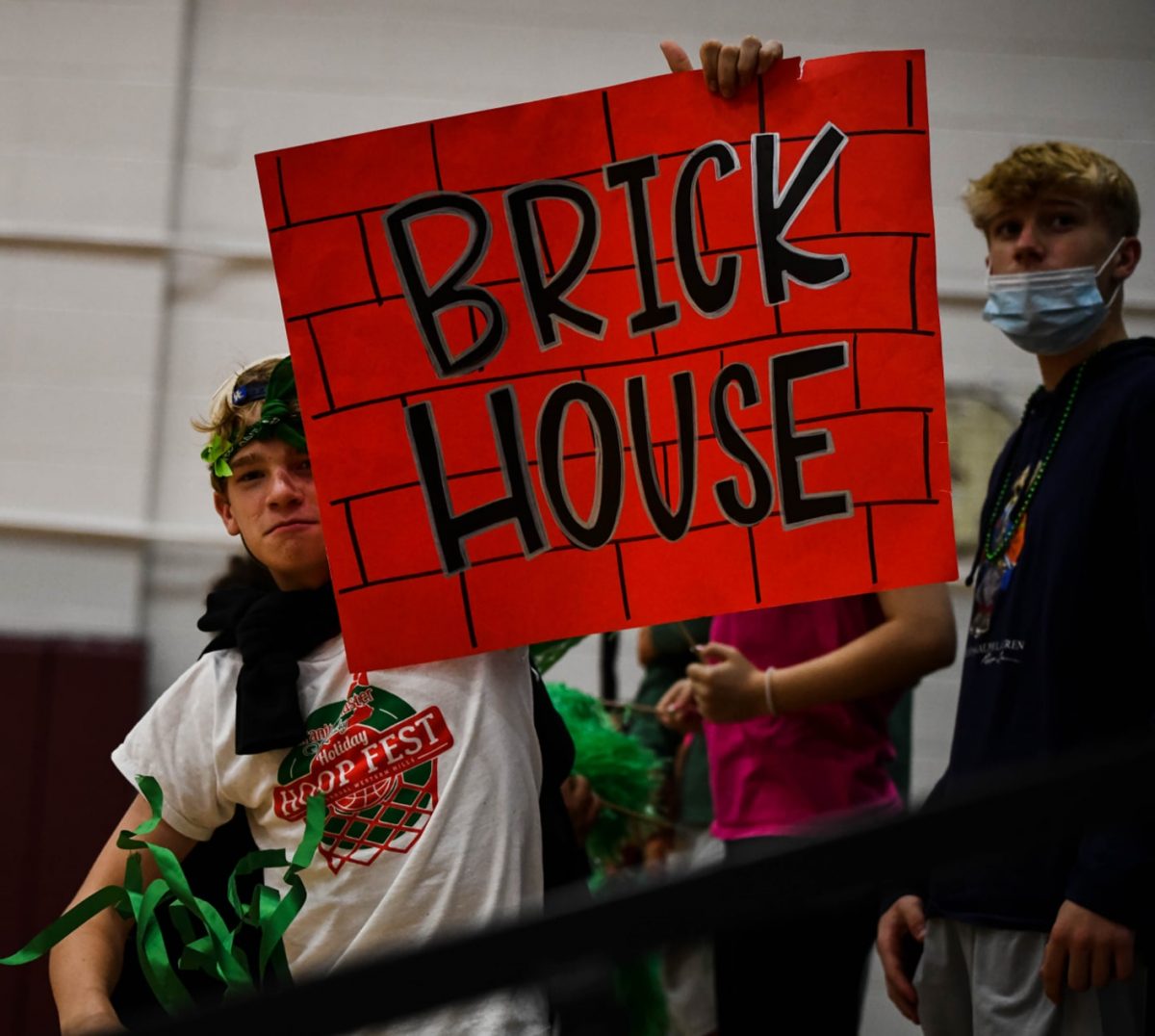 In Thursday’s (October 21) Bourbon County Citizen sports section, you can read the entire story and see more photos against Harrison County. In addition, you can also read about other Volleyball games played last week by Thacker’s team.

All photos taken by Krista Barnett, for BCHS Sports and the Citizen Sports Department 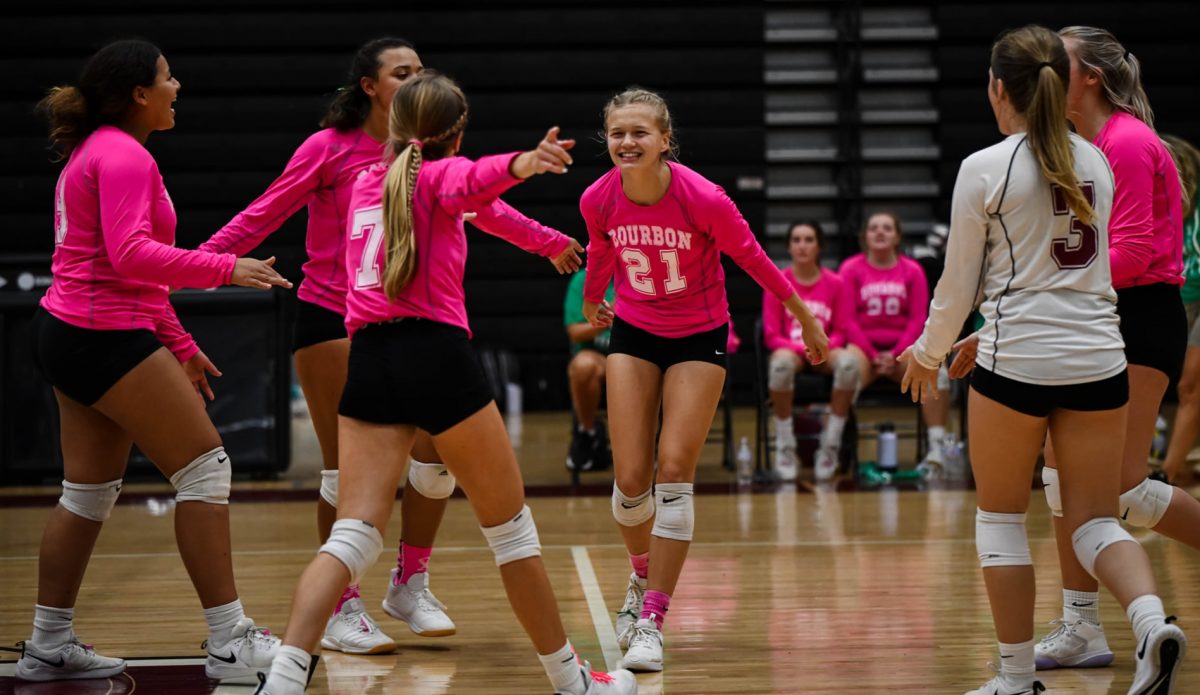