26 YEARS OF DEDICATION – The Bourbon County Softball program honored long-time coach Tony Sosby last week prior to their game against cross-town rival Paris. Sosby coached for 26 seasons before stepping away from the job last spring. His jersey will be hung at the field that is named after his Dad (John Sosby Field) to recognized his dedication to the program that he started 26 years ago. Pictured in the photo from left to right are members of the Sosby family. They are Walt Martin, Logan Martin, Miranda Martin, Nick Sosby, Courtlyn Sosby, Hudson Sosby, Lydia Sosby, former Lady Colonel Softball Coach Tony Sosby, Barrett Martin, Andrea Sosby, John Henry Sosby, Janice Sosby, Louie Sosby and Andrew Sosby.

took the Bourbon program from nothing to something

PARIS, KY – Coach Tony Sosby’s name will always be remembered when it comes to softball at Bourbon County High School, after the program honored the long-time coach last week in front of his family, friends and former players, by hanging a jersey with his name on the back of it to celebrate his 26 seasons coaching the team before he officially stepped down from that position last spring.

Sosby’s jersey will be on display at the field that is named after his Dad, John Sosby, a long-time supporter of the program who did wonders turning the Bourbon softball diamond into an elite field. One will be able to view the jersey on the centerfield fence. 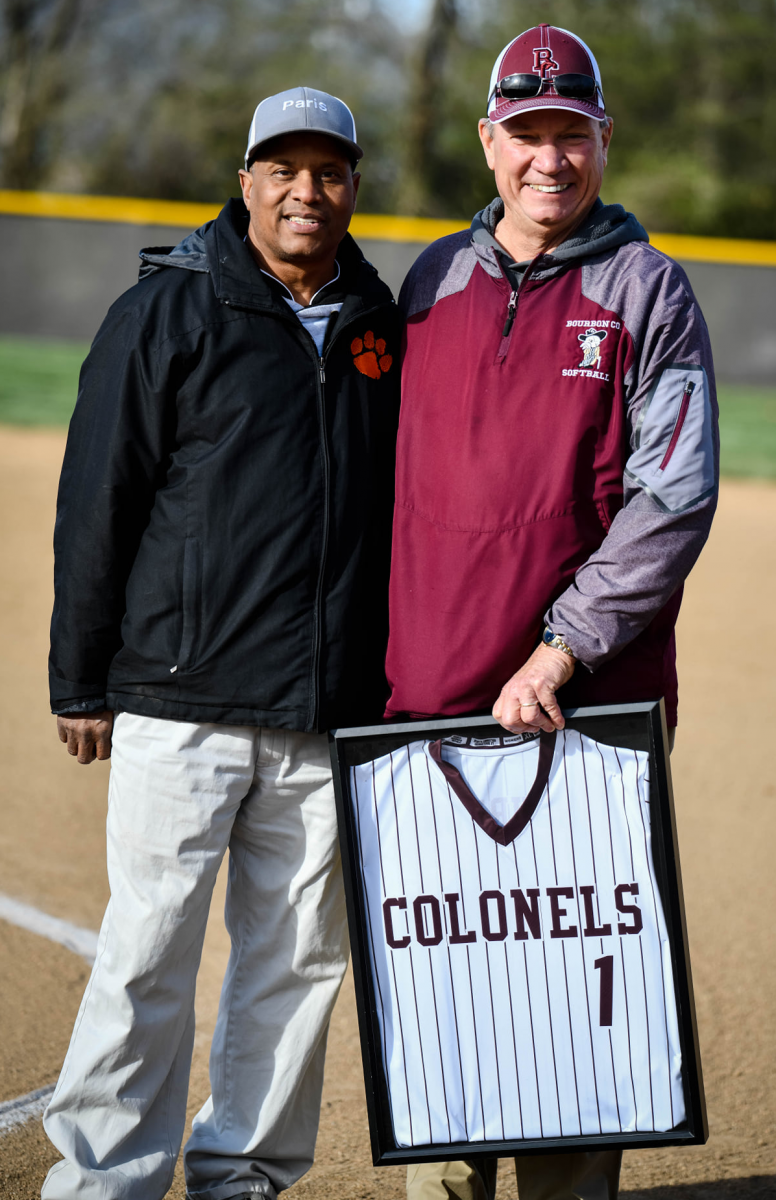 THEY MET FOR A REGION TITLE – Coach Tony Sosby is pictured here with Paris High School Coach Dwayne Rice during last week’s softball game between the Ladyhounds and Lady Colonels where the Bourbon Softball program honored their long time coach, who saw his 2018 team beat Rice’s team for the program’s first and only region softball title.

Sosby, who started the softball program at Bourbon, led the team to six district titles, six district runners-up, three region runner-up finishes and their only region title, when they defeated cross-town rival Paris back in 2018. Ironically, it was Coach Dewayne Rice’s Ladyhounds on hand to play Sosby’s former team on the day he was honored. In addition, the Coach was named 10th Region Coach of the Year three times and coached in the Kentucky East/West All-star game. His teams won an astonishing 415 games over his tenure and that ranks him as the 11th all-time winningest coach in the history of Kentucky High School Softball. Sosby would go on to be inducted into the Kentucky High School Softball Hall of Fame back in 2018.

Looking back, Sosby’s best team that actually had a shot at competing for a state title, never got the chance to take the field because of the Covid Pandemic that saw the KHSAA cancel the entire 2020 spring sports season.

Bourbon entered that year ranked No. 1 in the 10th Region, had arguably the best player in the region and they were also ranked as high as No. 10 in the preseason state rankings.

When asked about the team that never got the chance to compete and fulfill their dream, Sosby calmly said, “They would’ve set many school-records!” 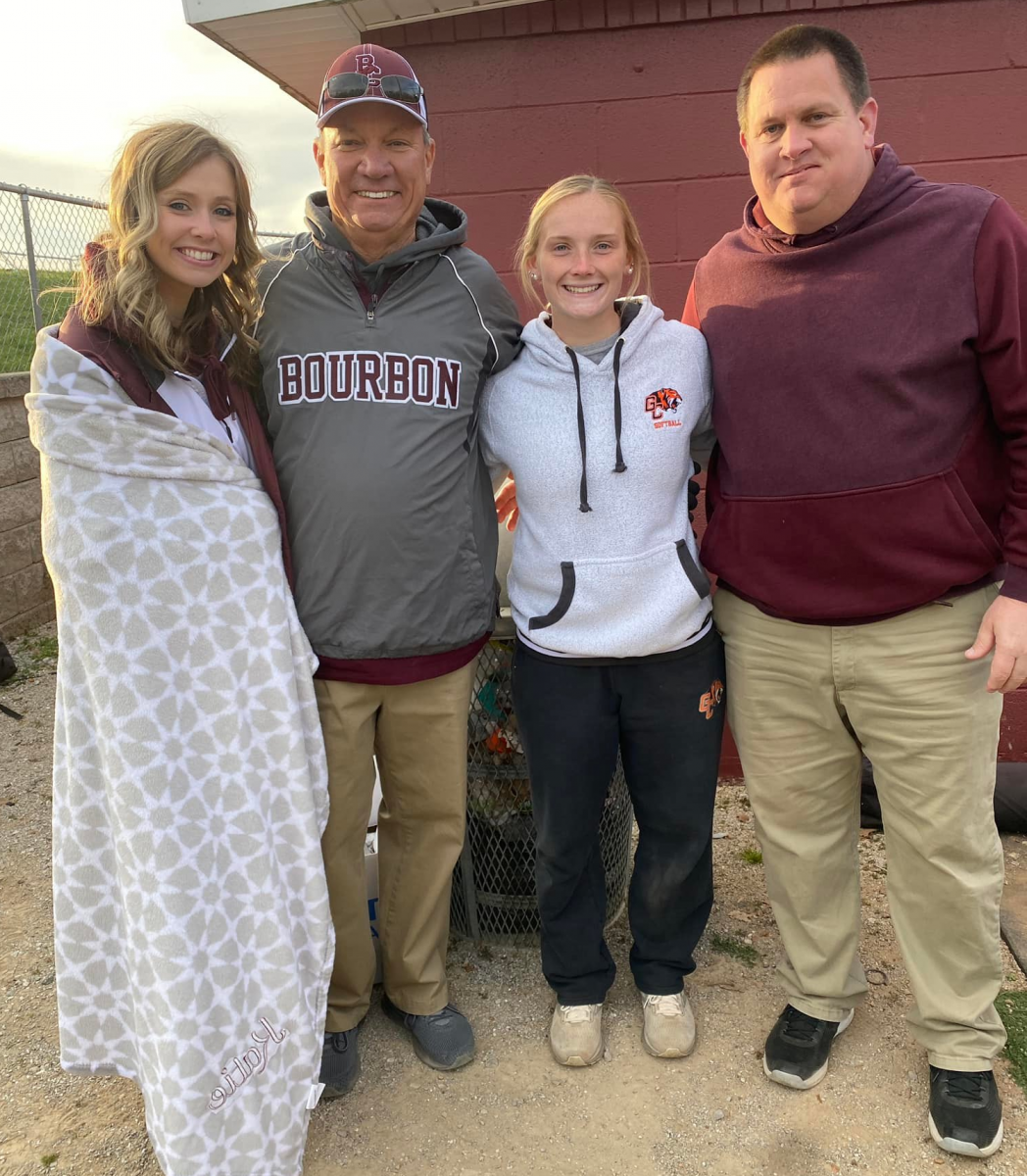 SHOWING SUPPORT – Coach Tony Sosby is shown in this photo with his long-time Assistant Coach Dan Donovan and two of his former players, Katie Ritchie and Kaylyn Barnett.

Over Sosby’s last nine years, the Lady Colonels won at least 23 games seven times, including the 2012 team, who recorded the most wins of 31. That team would go on to lose to Nicholas County, who Bourbon handled easily late in the regular season, in the region final. Another one of Sosby’s teams that had a shot at a region title was his 2016 team that lost to Montgomery County 6-5 in the opening round of the 40th District Tournament. Bourbon beat the Lady Indians (7-1 and 14-0) during their regular season meetings. Continuing on, the Lady Colonels from 2016-2019, lost only five games against region opponents, with four of those losses coming in post season play … two in the region finals, before they got over the hump in 2018, where they avenged a district final loss to Paris to win the region title and advance to Owensboro.

“I was fortunate enough to have some great parents over the years and a very supportive family,” Sosby said during a phone conversation. “I missed dance recitals, baseball games and much more because of coaching but now that I have five grandsons, I can see me one day end up coaching again with my sons and son-in-law in whatever sport the grandchildren decide to play.”

When asked if he missed coaching the high school team, Coach Sosby replied by saying, “Some days!”

“You meet many friends because of athletics and I do miss talking with the other coaches, players, teams and umpires. But what I miss most, is the back and forth in-game strategizing.” 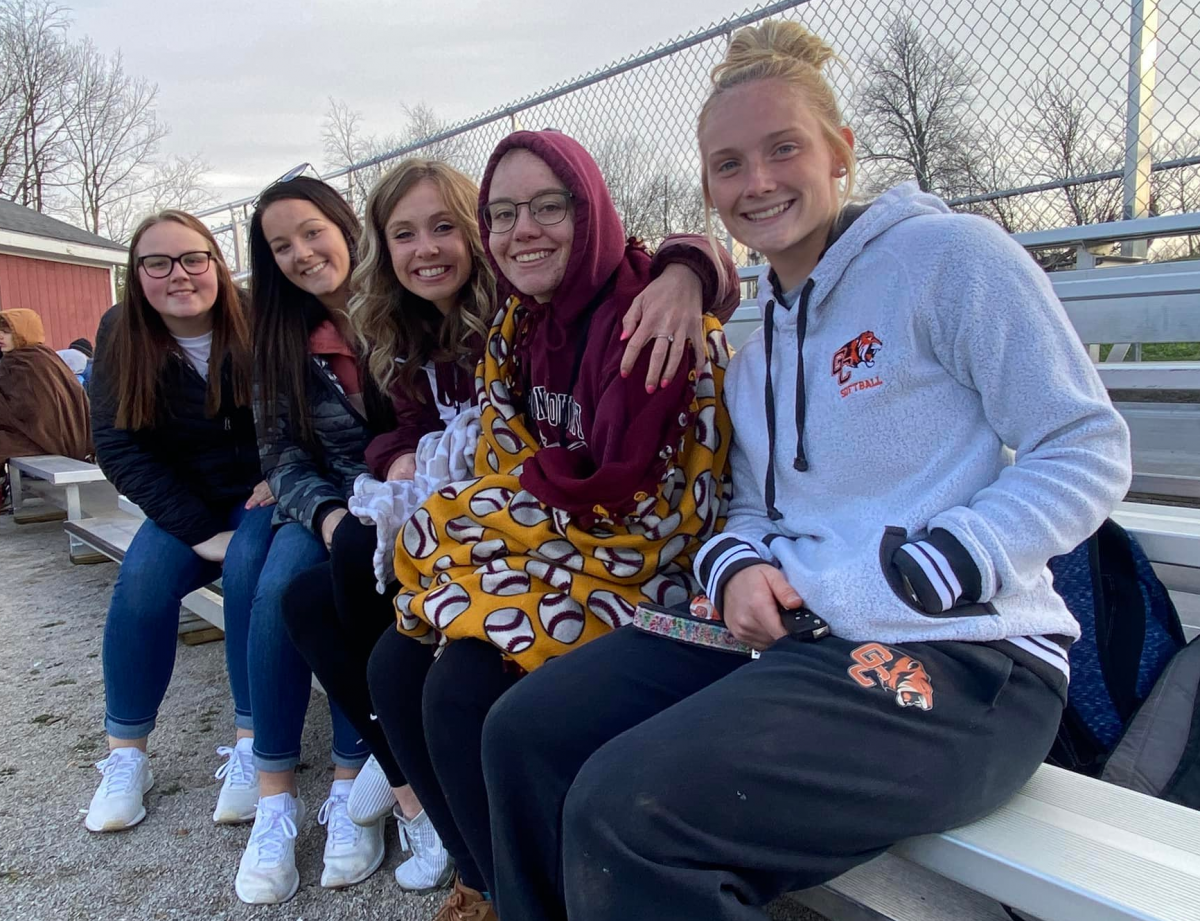 FORMER PLAYERS IN ATTENDANCE – These former Lady Colonel softball players made it out on a very un-spring like cold day to watch their former coach get honored. Pictured in the photo from left to right are Sara Dishman, Bree Dishman, Katie Ritchie, Alyssa Nicholls, and Kaylyn Barnett.

Following the pregame ceremony, Coach Alex Hardy (the new coach) would then lead his Lady Colonels over Paris 16-1 to make it a great day for their former Coach, who certainly had many victories during the rivalry. Junior Miranda Sexton led the way with a 3-run homerun. Sophomore Katie Witt had a single, double and RBI. Fellow sophomore Micah Olson laced a double to plate a runner, while seventh grader Kenley Herrington had two singles and knocked in two runs.

Paris’ lone run came on a first inning homerun off the bat of senior Nia Kenney.

For now, the former Lady Colonel coach can relax and reminisce about his last 26 years of coaching before he starts his next journey with the grandchildren.

Although he was with the softball program for 26 years, Sosby was part of the school system for 28 years before his retirement. While at Bourbon, Sosby served as head boys and girls basketball coach, served as the school’s Athletic Director for several years, was a teacher and coached golf, while serving as President of the 10th Region Girls Basketball Coaches Association.

All Photos taken by Krista Barnett 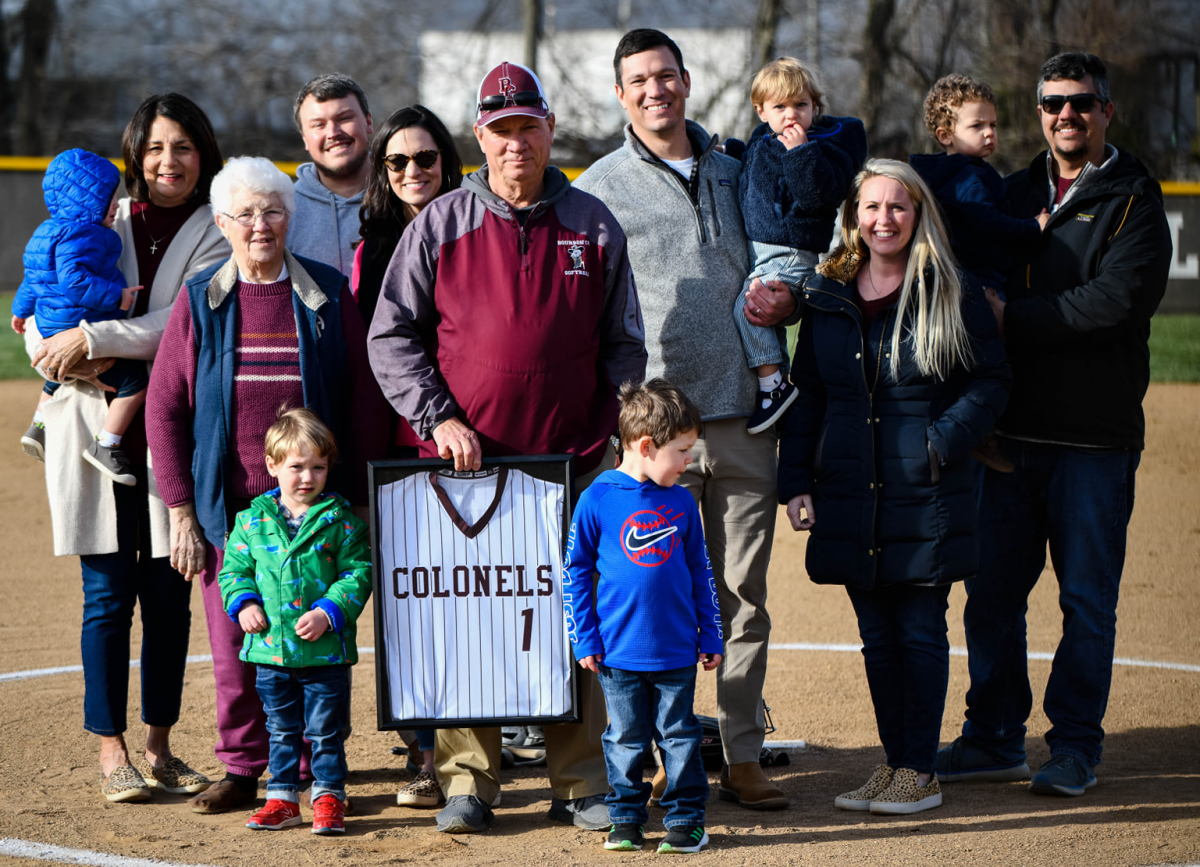