will represent the Lady Colonels at state as individuals 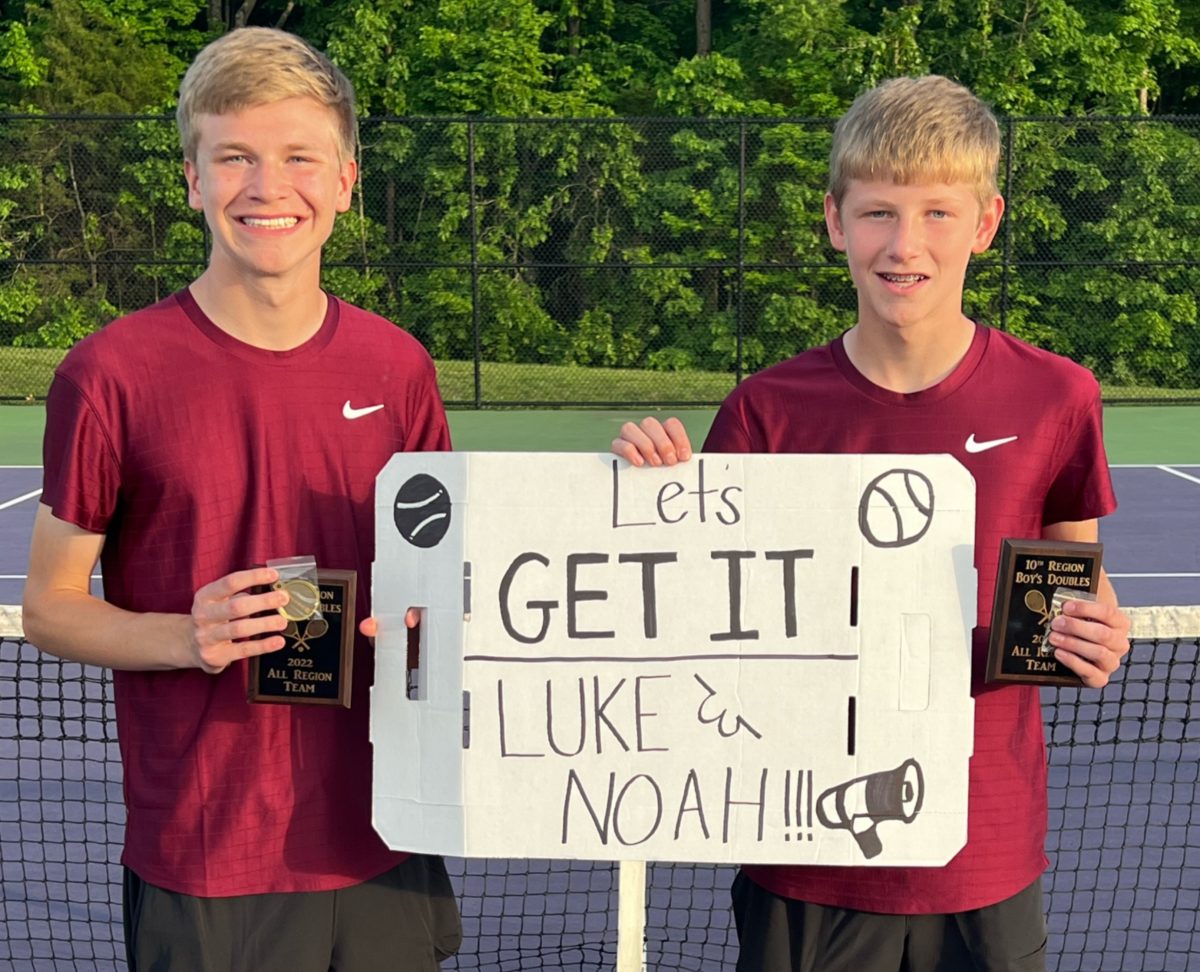 STORY SUBMITTED I For The Citizen

While there, the boys tennis team was looking to repeat as champions as they brought home the title in 2021, as well as Luke and Noah Earlywine, who were runners-up in doubles last spring. Another player that was also looking to make a return trip back to state was  Lady Colonel Katie Mulcahy.

The BC girls team showed up at the 10th Region Tourney expecting to have some success and they lived up to those expectations. The doubles team of Destin Turner and Taylor Koch advanced to the round of 16 by defeating Fields/Appelman from Augusta 6-1, 6-0. The duo then defeated Parker/Crowe from Mason County 7-5, 6-4 to advance to the quarter finals. In the quarters, Taylor and Destin met the 2 seed Tapp/Strode from Montgomery County, where they fell 6-3, 6-0, ending a tremendous season for the two.

In singles, eighth grader Aysha Garza came in as the 3 seed. After receiving a bye in the first round, Garza defeated Morgan Hart from Pendleton County 6-0, 6-0. Garza then took on Lakyn Griffith from GRC and took her down 6-3, 6-0. This placed Aysha in the semifinals where she faced eventual champion Isabella McDowell from Campbell County. McDowell defeated Garza 6-0, 6-1. As a semifinalist, Garza, who will have a bright future, qualified for the state tournament. 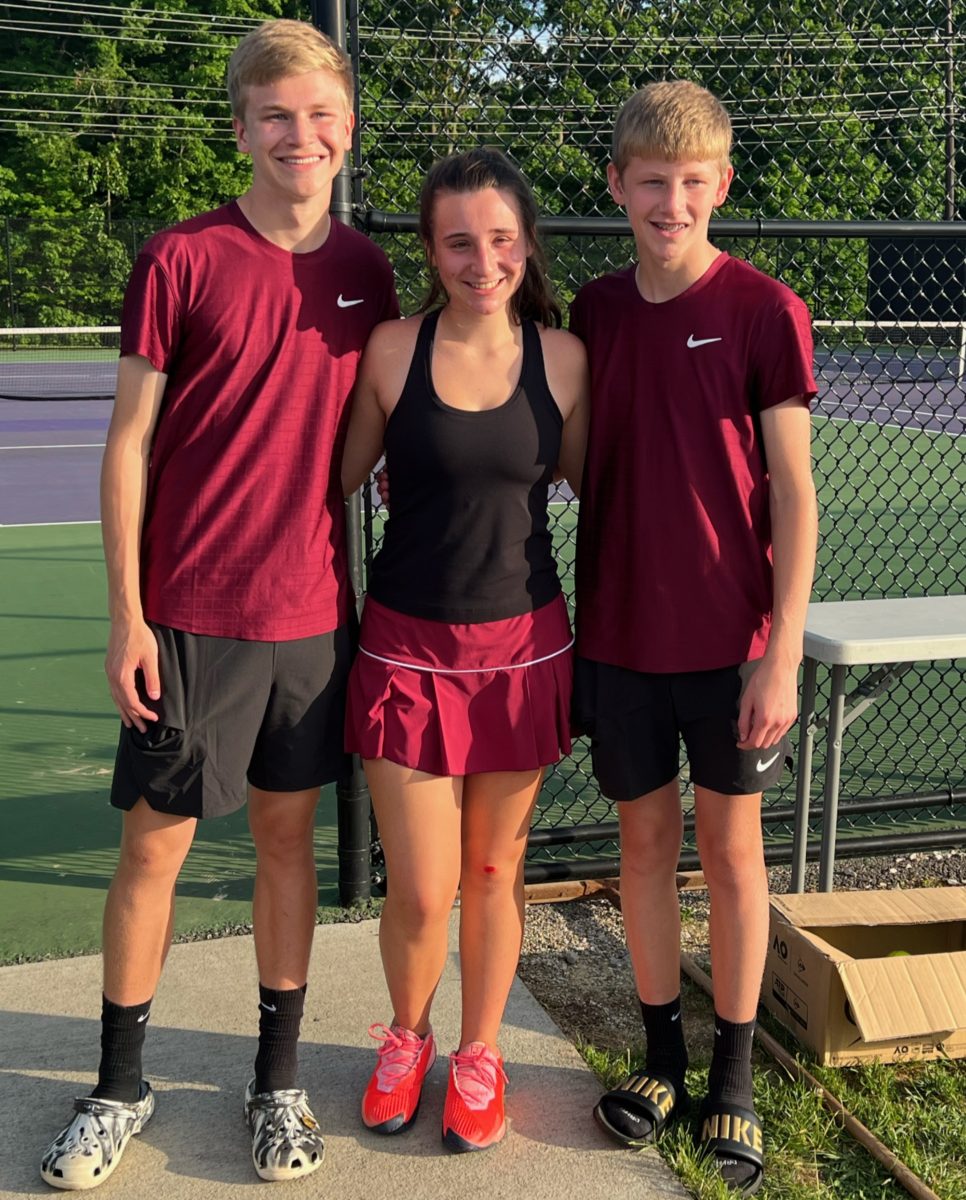 Katie Mulcahy entered the tournament as the number 1 seed, as she was undefeated in regional play on the year, as well as the defending region runner-up. 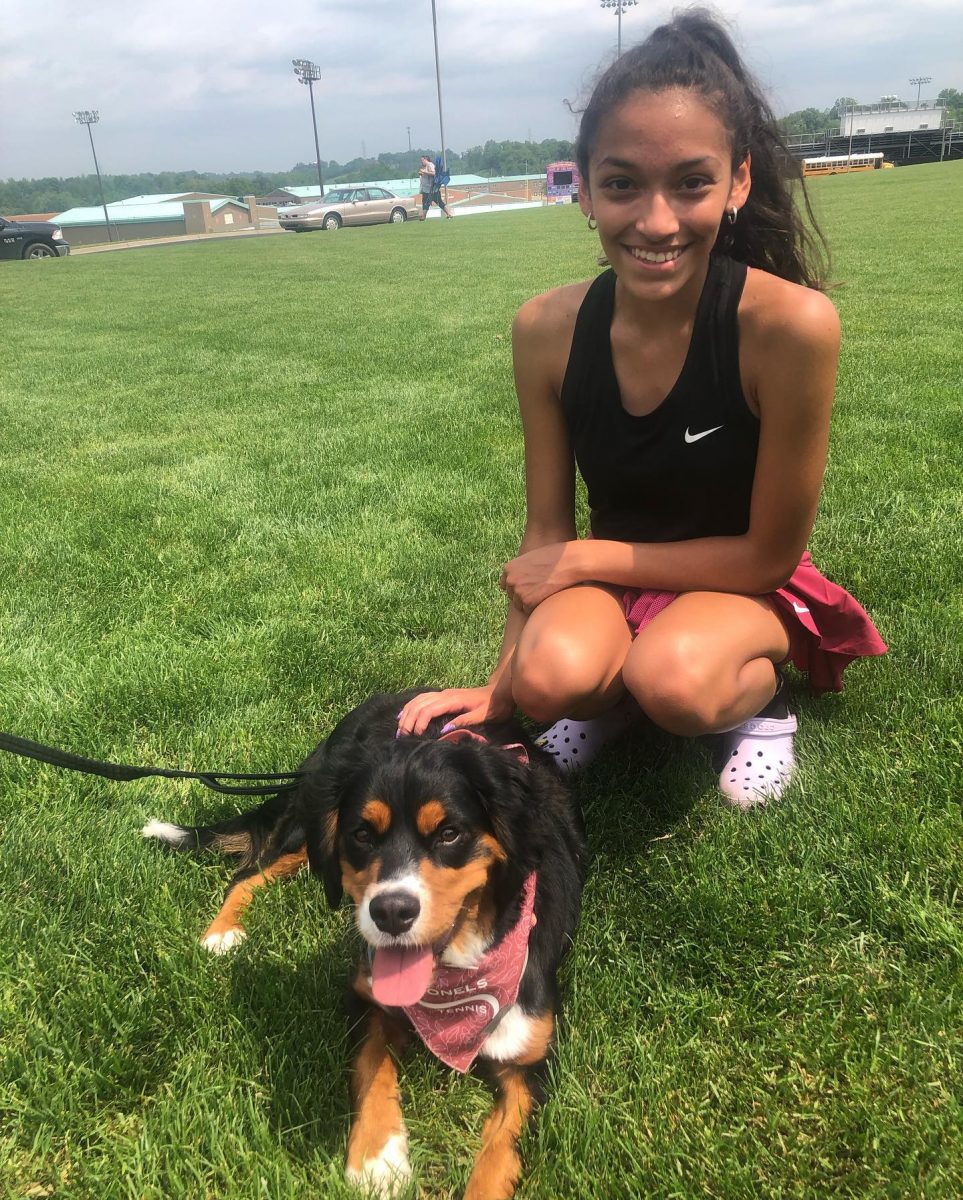 Mulcahy made quick work of her first opponent Sarah Quitter from Bracken County. Katie was up 5-0 when Quitter retired. In the semifinals, Mulcahy beat Katie Switzer from Nicholas County 6-1, 6-1. This would pit the senior against Rylee Ritter from Campbell County who she defeated 6-1, 6-1. In the finals, Katie faced another Campbell County opponent, the 2 seed Izzy McDowell. The two had recently had a three set battle during the last part of the regular season in which Mulcahy ended up winning. This one would be an instant classic going three sets again. McDowell got the best of Mulcahy this time, however, as she defeated the BC standout 6-1, 5-7, 1-0 (10-7.) Mulcahy will still advance to the state tournament that starts May 31 in Lexington.

The Colonel boys team was looking to repeat at regional champions after bringing home the hardware in 2021. Taylor Osborne’s team had some tough luck in the tournament draw which made the repeat a very difficult task.

Sophomore James Mulcahy came in as the 8 seed. James dispatched Dakota Brown from Harrison County 6-2, 6-2 in the round of 16. Mulcahy then had to play the 2 seed Tennyson Prater from GRC. Prater defeated Mulcahy 6-3, 6-2.

Freshman Case Davis was seeded 6th for the tournament. Davis met up with Paris’ Aiden Jones in the round of 16. Jones won the long first set 7-6 (7-1) to take the lead. Davis fought back to win the second set 6-0. In the “super tie-break” to decide the 3rd set, Davis won 10-1. This would move Case on to play the 1 seed and eventual singles champion Dason Herrington from Harrison County. Herrington, who went on to win the finals easily over GRC’s Prater, ousted Davis 6-1, 6-0.

The doubles team of Luke and Noah Earlywine came into the regional tournament undefeated in regional play. The brothers had lost one match all season to a team from South Warren in a big tournament held in Laurel County. The brothers were the regional runner-up in 2021 and were looking to bring home the crown this season.

The Earlywine’s got things started by beating Jenkins and Covington from Montgomery County 6-0, 6-0. Luke (11th grade) and Noah (8th grade) then faced Wells/Wells from Campbell County. The Colonels handled them 6-0, 6-2. In the semifinals, the brother duo stayed hot, defeating Hurst/Hardy 6-0, 6-1 to advance to the finals. In the finals Luke and Noah faced the 2 seed from Campbell County, Combs/Combs. The week prior, the BC duo had defeated the Combs’ 6-4, 6-1 to end the regular season. 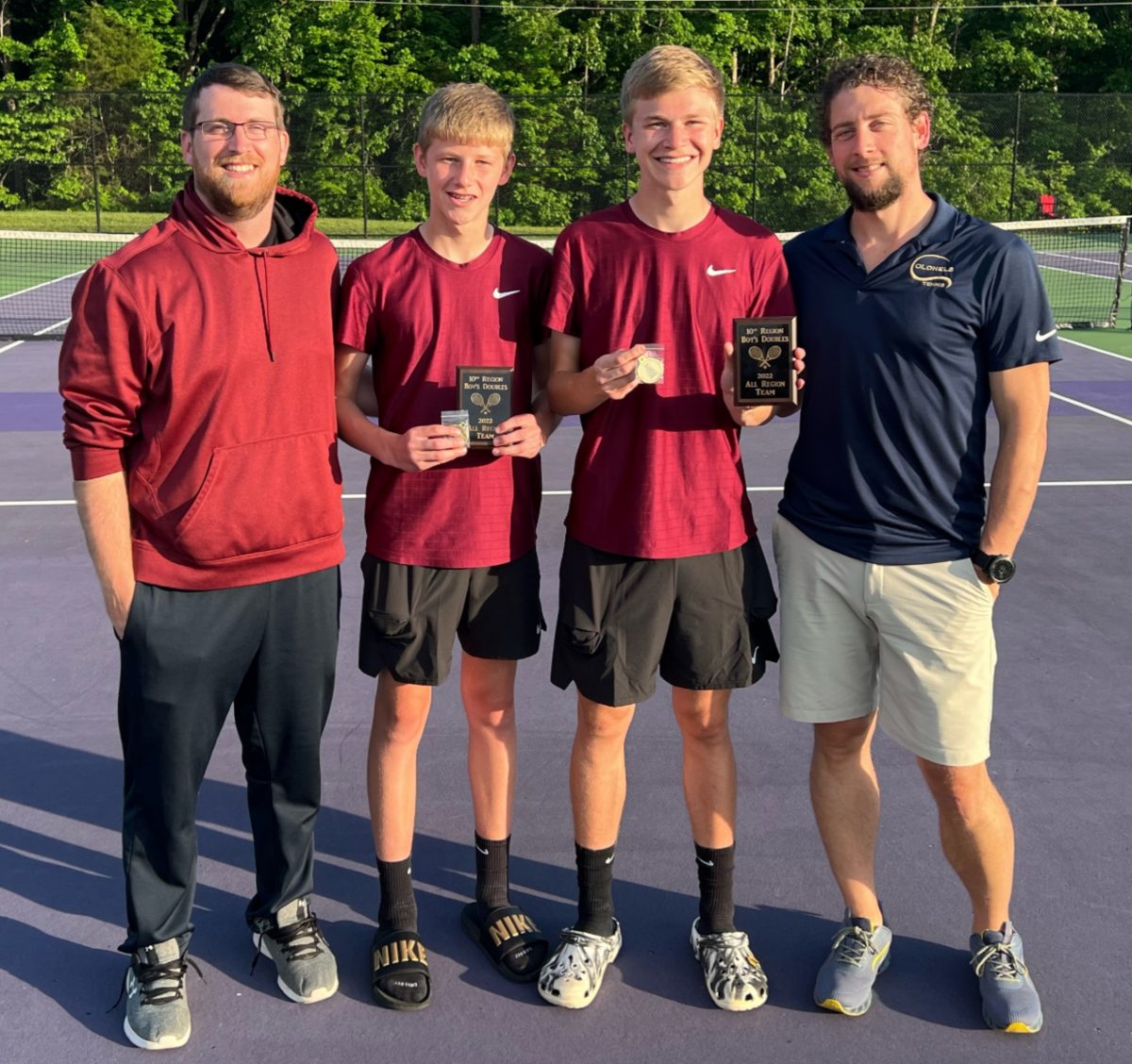 In the regional finals, the Camels took an early lead, going up 2-0 to start the contest. After holding serve and cutting it to 2-1, the Earlywine’s were looking for a break of serve. With Campbell leading 4-3, the Colonels did just that. They broke serve to make it 4-4 and never looked back. They took the first set 6-4 then routed the Camels 6-1 in the second set to earn the title of Regional Champions.

The “big brother” Luke stated, “I knew if we could get that break of serve back we could put some pressure on them. Once we did that, it was over.” Luke and Noah will play in the state tournament starting May 31 that will be played at Top Seed and UK.

Coach Taylor Osborne had this to say about Luke and Noah and about the future of the boys tennis team.

“Luke and Noah winning was another huge step for our program. The future is bright with every player returning. Next year we hope to add to the growing list of accolades these boys have already achieved.” 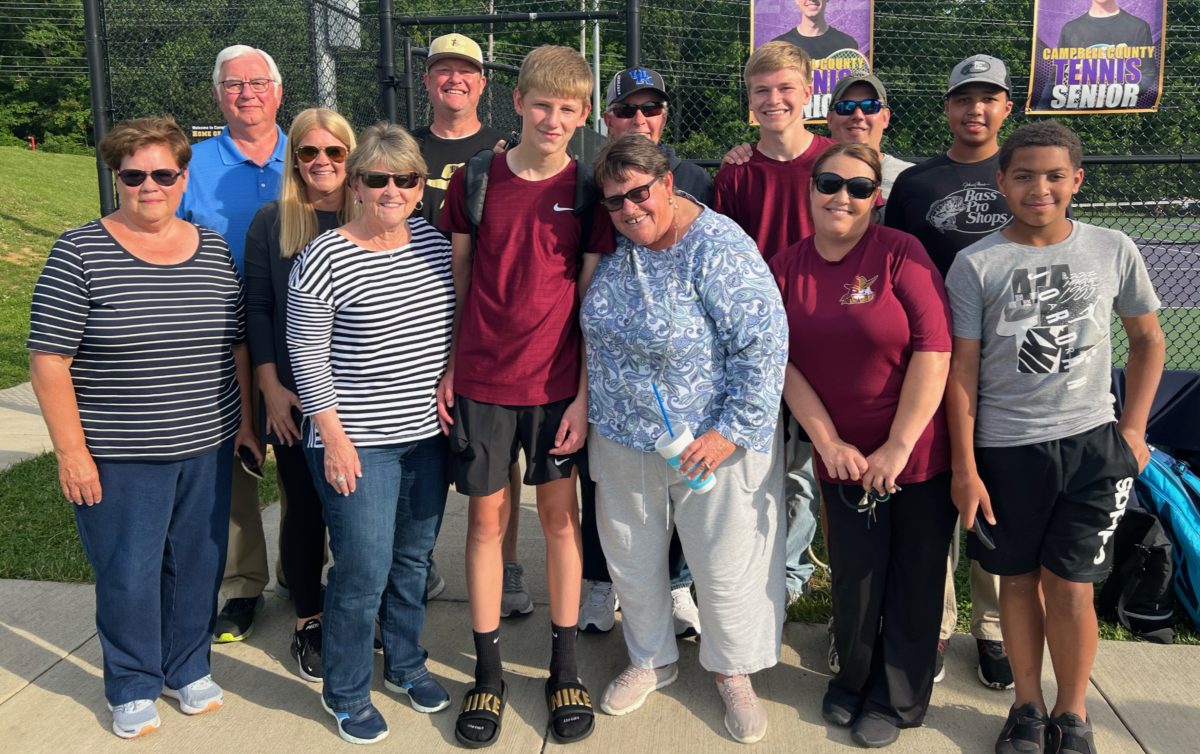 The 2022 KHSAA State Tennis Championships presented by UK HealthCare. Play on Tuesday, May 31 will be split between Top Seed Tennis Club and the UK Hilary J. Boone/Downing Tennis Complex.

All matches on Wednesday, June 1 and Thursday, June 2 will be played at Top Seed Tennis Club.