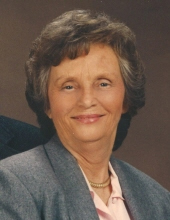 Helen R. Pate Cassity, 91, of Paris, widow of James A. Cassity died Thursday, February 04, 2021 at the Bourbon County Community Hospital, in Paris Ky.
A native of Bourbon County, she was the youngest daughter of Wallace C. Pate and Thelma Vice Pate. She was a retired employee of the Bourbon County School system having served for 19 years as secretary of Millersburg Elementary School. She also acted as an impromptu school nurse giving first aid to many school children during her tenure as secretary. Prior to this she previously worked at Lermans, Hansley Mills, and Houston and Doyle in Paris Ky. She was a member of the Joy Riders at Ruddles Mills Christian Church and loved traveling, sightseeing, and eating at various restaurants. She loved to play the piano and served as pianist and organist for many years at Millersburg Christian church. She also substituted as a pianist at Ruddles Mills Christian Church when called upon to do so. Her piano playing at Bourbon Heights Apartments will be sorely missed by its residents. She attended Ruddles Mills Christian Church for the last ten years, although she was a member of Millersburg Christian Church. She was also a Kentucky Colonel and a former Millersburg City Council Woman.
A big time fan of the UK Wildcats basketball program, she even loved watching the Louisville Cardinals when she could catch them on TV. She served as a former President of the American Legion Auxiliary Post 257 in Millersburg KY in the fifties and was committee chairman of the Old Bourbon County High School Reunion held each year in Millersburg.
She is survived by two sons and daughters-in-law, Terry and Linda Cassity of Paris, Mike and Cathy Cassity of Paris; three grandsons Brian(Heather)Cassity of Lake Shore, MD., Kyle Cassity of Cynthiana Ky., and Todd Cassity of Lexington Ky.; two great granddaughters Norah and Rachel Cassity. She is also survived by two sister-in-laws; Ellen Cassity of Paris Ky. and Anna Cassity of Millersburg Ky. along with many nieces, nephews, and cousins.
In addition to her parents she was preceded in death by her sister Majorie Pate Clough, and three brother-in-laws; George Clough, Paul Cassity, and William Cassity.
Funeral services will be conducted at 11:00 AM Tuesday February 9, 2021 at the Lusk-McFarland Funeral Home, 1120 Main St., Paris, KY by Bro. John McGuire. Burial will be in the Millersburg Cemetery.
Visitation will be from 5-8 PM Monday February, 8, 2021 at the funeral home.
Pallbearers will be Steve Staniford, Rudy DeWitt, Bradley Toadvine, Billy Purcell, Bob Eads and Todd Earlywine.
The funeral arrangements were entrusted to Lusk-McFarland Funeral Home, 1120 Main Street., Paris, KY 40361.
The online guestbook is at www.Lusk-McFarland.com and a 24 hour funeral information line can be reached by calling 859-987-43