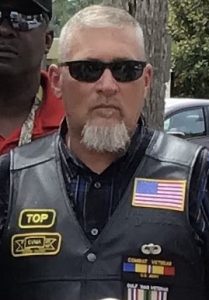 red Warren Liggett, Jr. passed away suddenly and unexpectedly on March 6, 2021. He was just 59 years old.
Fred was born and raised in Paris, KY, to the late Fred Sr. and Lydia, he later enlisted in the US Army in 1985. Who knew then that he’d spend north of 20 years as an enlisted soldier, finally retiring in 2005 as a First Sergeant, E8. His final discharge documents and retirement orders list a tremendous amount of decorations and awards, which include among others The Legion Of Merit award, Global War On Terrorism Service Medal, Kuwait Liberation Medal, Army Superior Unit Award and Parachutist Badge. 1SG Liggett had also completed the Sergeants Major Course and was promotable to E9 at the time he retired.
After military retirement he began working with the VA at Bay Pines and landed a very important job as a Transitional Patient Advocate and Social Worker. The work he did in helping patients on the inside and other veterans on the outside made a tremendous impact on so many lives. Fred also was an active member of the VFW and the Combat Veterans Motorcycle Association (CVMA) who gave him his road name, “TOP”. That roasted-orange colored trike he drove….. you couldn’t miss him! Along with all the love and support he gave to veterans organizations over the years, his other love was fishing. He would/could be out on the boat all day and still not be tired of it. Fred was a long time member of Bay Area Bass Masters fishing club. What a full day everyday with hobbies like fishing, motorcycles and a big family to love on.
Several family members predeceased Fred including his parents Fred Sr. and Lydia, along with his sister Nora Day. Survivors include his loving wife of 40 years, Anita (nee Yarnell); sons Jeremy (Holly) and Jason (Lauren); daughter Jessica Alderman (Thomas, III); grandchildren Dylan Peyton, Charliegh, JP, Savannah and JJ Liggett along with Tristyn, TJ and Taryn Alderman; and many nieces and nephews.
Services and Ceremonies have been entrusted to Veterans Funeral Care in Clearwater, FL. Face coverings/masks will be required when indoors at the funeral home and when on-property at any VA facility or National Cemetery.
To celebrate this amazing man and career solider there were services on Sunday, March 14, and Monday, March 15. Sunday the 14, viewing/visitation began at 5:00 p.m., at Veterans Funeral Care, which is open to the public, friends and family. Chapel Service began at 6:00 p.m., officiated by Pastor Branson Rogers. On Monday March 15, there was a final farewell gathering at Bay Pines VA Complex near the south dock (waterside) from 10:30 a.m., to 11:30 a.m. Funeral procession departed at 11:45 a.m., up to Florida National Cemetery where First Sergeant Liggett was laid to rest with full military honors at 1:30 p.m.
Condolences can be shared on the VeteransFuneralCare.com obituaries tribute page.