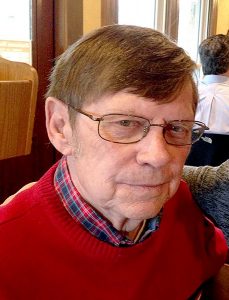 M. Ron Parker, Aug. 30, 1940-March 30, 2021, Business Manager for the Paris-Bourbon County YMCA and 16 year resident of Paris, died March 30, at Central Baptist Hospital in Lexington after a brief battle with cancer. Born in Tulsa, Oklahoma to Frank and Rita Parker, Ron was an Army veteran who spent three years in Germany after graduating high school, then took up his lifelong career(s) of corporate accounting and professional writing.
Ron spent the majority of his adult life in the San Francisco Bay area where he met his wife of 39 years, Ellen who survives him. The pair became acquainted at Golden Gate Fields where Ellen was working as an assistant in the Publicity Department and where Ron was covering horse racing, one of his two writing passions.
Ron’s first writing love was in ‘fandom’ – or as a fan of EC Comic books, his interest in which allowed him to meet such outstanding writers of science fiction and horror as Robert Block, author of Alfred Hitchcock’s classic, Psycho. But horse racing turned out to be his real love and it became a family joke that Ron and Ellen met when she wrote him a fan letter. Thirty-nine years of marriage later, she was and remains his biggest fan.
Known for his sly sense of humor, often found in his “View From the Rail” column found in Turf and Sport Digest as well as such turf publications as Horseman’s Journal, The Thoroughbred Record, The Thoroughbred of California and more recently The Thoroughbred Times, Ron also covered Bay area racing and did more serious pieces.
A great lover of animals, Ron could never say no to a cat and thus he and Ellen’s ‘family’ consisted of four such creatures, all strays or shelter cats. Ron arrived in this world on a Friday and never was the saying ‘Friday’s child is loving and giving’ more evident than in his gentle touch with animals. It is one of his greatest legacies.