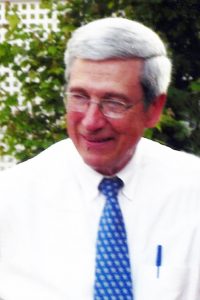 Edwin (Ed) Clark Thomas, 82, of Paris, KY, died peacefully on Friday, June 18. Ed was married to his high school sweetheart, Kay Kuster Thomas, for 60 years and 1 day. He is survived by his daughter Jennifer Clark Thomas Freeland (Mark) of Nashville, TN, and son Edwin (Ted) Kuster Thomas (Kristin) of Rome, GA, and cousins, nieces and nephews. Ed was known as ET to his grandchildren, Tempest Margaret Thomas, Andrew Fisher Freeland, Edwin (Ned) Robertson Freeland, Elinor Kay Thomas and William Kuster Thomas. Ed was preceded in death by his parents Frances Mark Thomas and Erasmus Clark Thomas as well as his brother William Mark Thomas and long time friends Jim Hill, Kenneth Scott and Ed Houlihan. Long time friends surviving Ed include Ted Kuster, Waller Hewlett and Fred Wilbur. James Cowan was a devoted friend to Ed near the end.
Ed was born in Paris, but grew up in Little Rock, where he attended elementary school. At Bourbon County High School, he was valedictorian of his class. He played sports, basketball being his favorite, and he was a Boy Scout, earning the rank of Eagle at a young age. At the University of Kentucky, Ed studied electrical engineering. He was a member of Delta Tau Delta Fraternity.
Upon graduation, Ed and Kay married, and moved to Wayne, PA, a suburb of Philadelphia, where Ed began his career with General Electric and started graduate studies at the University of Pennsylvania. Ed worked in the Space Division located in Valley Forge. During his 44 year career, he was a program manager for numerous geospatial systems integration projects, most of which were top secret. He commuted between Building “A” Space Division in VF and Washington D.C. for several decades. For Christmas one year, his family gave him deer whistles to install on his car so he wouldn’t have an accident in the country. Eventually he got a car phone and was able to do work in stopped traffic.
Relief came when Ed and Kay purchased their summer home, an old canal house in Chesapeake City, MD. It was almost half way between Wayne and Washington. The family restored the 1840 townhouse on weekends and in the summers. Ed did most of the work himself. There is a favorite family photo of Ed sporting cut off shorts, a tool belt, ball cap, face shield and an electric grinder. The Thomases entertained family and friends for many years in the little yellow house on George Street.
Although Ed’s office stayed in the same building in VF for 44 years, his employer changed. At some point, GE’s space division was purchased by Martin Marietta, and then later MM merged with Lockheed to become Lockheed Martin. Ed finished his career with Lockheed Martin in a spectacular way. In 2003, LM offered Ed the opportunity to work with the Royal Air Force at Menwith Hill in North Yorkshire, England. Ed and Kay sold their homes and moved to Harrogate. For over two years, Ed worked with the Brits doing something we’re not sure about. The couple traveled all over England going to car boot sales, antique fairs, and visiting country manor homes. They visited many European countries and took several cruises. They even took a workshop to learn about dry stone walling.
Ed and Kay returned to the US and Ed retired. They moved back to Bourbon County to live in a house that has been in Kay’s family since it was built in 1792. Ed had an active and busy retirement restoring and renovating their farm house as well as the family home. In addition to carpentry, Ed was an accomplished wood worker. He made furniture for all his homes as well as his children’s.
In Wayne, Ed was an elder of Wayne Presbyterian Church and a member and former president of the Upper Merion Park and Historic Foundation. He was instrumental in the acquisition and development of McKaig Nature Education Center, a 90 acre natural preserve in the heart of Wayne. In Paris, Ed was an elder of the First Presbyterian Church and member and former president of Historic Paris – Bourbon County. He was a member of Spindletop Hall, The Lexington Club, First Families of Kentucky, the Lafayette Chapter of Sons of the American Revolution, and a UK Fellow.
The family thanks all of Ed’s caregivers especially Dr. Nathan Moore and Beverly’s Angels of Paris.
Ed was a gentleman and a scholar and lived the Scout Oath and Law daily.
A visitation will be held at Historic Pleasant Green, Ed’s last great project, on Wednesday, June 23, from 3:00 to 7:00 p.m., at 405 McNease Road, Paris, KY.
A memorial service was held at the First Presbyterian Church, 517 Pleasant St, Paris, KY, at 11:00 a.m., on Thursday, June 24.
A private burial will be held at North Middletown Cemetery. In lieu of flowers, donations may be made to Hopewell Museum of Historic Paris – Bourbon County.