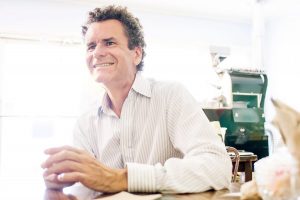 Raymond Mark Newberry, 70, of Paris, KY, died Tuesday, June 29, at St. Joseph Hospital in Lexington after a six-month battle with cancer.
Newberry owned and operated Caffe Marco on Main Street from 2006, until his retirement early this year. Born in Cincinnati and raised in OH, he attended Bowling Green University then spent time in Michigan and Toronto, Canada, before heading west. Over three-plus decades in San Francisco and later Northern California, he was a successful furniture merchant, bookseller and wine marketer. In the early 2000s, he was drawn to Lexington by its rolling hills, Keeneland ponies and affordable real estate – then to Paris for its small-town welcome for his last profession, coffee roasting. He found success in CaffeMarco, with Lexington’s Whole Foods, Fresh Markets and Good Foods Co-op among his largest customers.
Known for his style and taste, Newberry favored good red wine and dark roast coffee; felt fedoras and custom-made suits; German cars, Italian shoes, handmade tables, classic literature, lively conversation and the music of Van Morrison and Django Reinhardt. He designed his two Shaker-style cottages for country living outside of Paris. Confident, creative, quirky, opinionated and exacting, his zeal for living was matched by his determination to live on his own terms. He truly saw the world in color, with a condition that co-mingled his senses and heightened his perceptions. Standard poodles were his constant companions, with his last girl, Penny Lane, 5, now at home with family.
Newberry was the second son of Raymond Donovan and Lorraine (Leisgang) Newberry, both deceased. His first wife, Anna Feraco, died in 1996. He was married to Teresa Simon of Mendocino County in California from 2001 to 2012.
Newberry is survived by six siblings and their families, Matt Newberry, Minneapolis; Jeff Newberry (Jane), Cincinnati; Jon Newberry (Betsy), Cincinnati; Peter Newberry (Kim), Berry, KY; Mary Newberry Olson (Ted), Wisconsin Rapids, WI; and Doug Newberry (Patti), Cincinnati; one uncle, Joseph (Rosemary) Newberry of Cos Cob, Connecticut; nine nieces and nephews; and many other family members and friends. Among them are Arthur Newberry, a nephew who now operates CaffeMarco; and very special longtime friend Journey McAndrews of Lexington.
A celebration of life event will be scheduled at a date to be announced. Burial will be private.