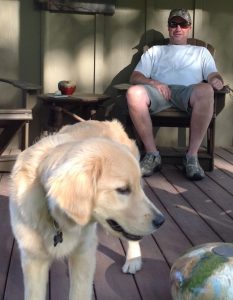 Frank Steven Slade (Steve), 62, died unexpectedly in an accident at our farm on the Cumberland River on Wednesday, August 11, 2021.

Steve was born in Bourbon County on May 4, 1959, to Ruby Scott Slade and Paul Vordon Slade and enjoyed an early life of devotion as an only child by his Mom and Dad to his wellbeing and development of his character, work ethic, and academic and athletic abilities. He had a deep love for his father who predeceased him in 2004, and was a devoted son to his mom for whom he has been the center of the universe.

Steve played all seasons on the football, basketball and baseball teams at Bourbon County High School, eventually focusing on his passion for football and was chosen for the Courier Journal All-state football team as a kicker and defensive tackle. Steve always liked to balance it all out with fun and mischief which he carried with him to UK where he declined an offer to walk on as a kicker and majored in Civil Engineering with an unofficial minor in Keeneland and recreational activities. He and his wife Susan met in engineering school, fell in love and married shortly thereafter and were blessed with a life of nearly 40 years together riding the ups and downs that all that entails including the birth of their beloved daughter, Jess… understanding and loving one another in a way and to a depth no one else could know.

Steve had the Slade temperament, an engineer’s eye for detail and perfection which he demanded of himself and others, and an incredibly kind and sensitive soul within. He moved from one passion in life to the next. Excelling in sports he picked up during his early adult years… billiards, golf, bowling and volleyball, then in later years flyfishing, archery and target shooting. When a subject caught his attention, he went all in, reading every book on the topic that he could find and seeking out the highest quality equipment which he collected with gusto.

Our daughter Jessica was his greatest passion of all and he read and learned everything he could about soccer so he could coach her LYSA teams when she was young and was proud beyond measure of their shared curiosity for the natural world and her development into a smart, brave, creative, kind, loyal and accomplished young woman who determinedly pursued her own passions in life.

Steve developed his engineering skills through his passion for highway transportation design and he excelled in this as well with an exceptional ability to envision the big picture, manage a complex project, as well as having a quick eye for the tiniest detail. He was blessed to have made many dear and great friends in his work world and loved mentoring younger engineers and designers who he held to his own high standards, but also loved and was very loyal toward.

Steve had no greater love and compassion than for animals, from his childhood beagles, Sport and Joe to our goldens, Kelsey and Abby who he’s no doubt reunited with. He doted on his beloved companions Ellie and Bee. He carried a love of thoroughbred horses from his high school and college days working on Runnymede Farm and others in Bourbon County and hoped to volunteer and get to work with them again when he was able to retire.

Our farm on the Cumberland River was the happiest place in the world for Steve and he threw his passion into developing it with native grasses, wildlife crops (not to shoot but to nurture) and to keeping it exquisitely maintained as the paradise it became for him. It offered the peace and solitude he craved, but also the adventure and risk that he sought in life. He could walk out the back door in the morning, put on his waders, and head down to the river to see how the fishing was that day. He delighted in sharing the farm with guests, especially those who shared his passion for flyfishing and who enriched his life with their visits. The pandemic offered him the opportunity to stay hunkered down at the river over the past year and a half and our plan was to live out our lives at the river, we just weren’t able to make it there in time.

We are so thankful for all the friends who have reached out from near and far to offer support and have helped us more than you can know. Steve’s expressed wish was for cremation and to spread his ashes at the farm. We are planning a private and personal celebration of his life in the coming weeks.

To share a remembrance of Steve or to offer condolences to his family, please visit milwardfuneral.com.