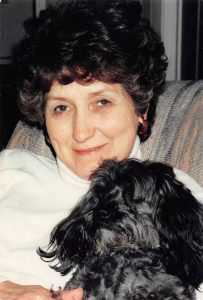 Beula Dean Adkins Fraley, age 79, wife of DeCorsey “Dee” Fraley, departed this life on Thursday, September 23, 2021, at Bourbon Heights when God needed a children’s librarian, and he got the very best.
Beula was born in Swannanoa, NC, on February 26, 1942, the daughter of the late Rex and Pearl Allen Adkins, attended Warren Wilson College, and was a graduate of Berea College where she was honored as the May Queen and presided over the historic May Day festivities. She retired from the Paris-Bourbon County Library where she worked as the Children’s Librarian and was a leader in the summer reading program.
Through this program she brought stories to life in young minds and created countless avid readers. She was a faithful member of First Baptist Church where she taught Sunday School and served as the church librarian for many years. She helped found the Hill House Pre-school in 1984. She was a dedicated member of the Dulcimer Dames and brought smiles to many faces as she made her folk toy “the dancin’ man” come to life with the music.
Over the past six years Alzheimer’s whittled away at the things that made Beula who she was, but it never took away her love for children or her devoted husband Dee. Her kind, genuine demeanor, southern charm and grace and her evening dinners and Sunday suppers will always be missed. Besides her parents she was preceded in death by a stepson, John D. Fraley, a brother, Harry Adkins, and a sister, Bea Wells.
In addition to her husband Dee, she is survived by a son, Mark Diamond; grandchildren, Tucker Diamond, Eliza Pearl Diamond; stepsons, Steven and David Fraley of NC, Bryan (Peden) Fraley, Clint Fraley; a stepdaughter, Sheila (Scott) Hayes; and six step grandchildren.
The memorial service for Beula Dean Adkins Fraley will be at 2:00 p.m., on October 2, 2021, at First Baptist Church, with Rev. Don Reed and Mark Adler officiating.
Inurnment will follow in Paris Cemetery with honorary bearers being Mark Diamond, Jerry and Bonnie Brady, Kenney Roseberry, Dorothy Osborne, Anne Rogers, Carol Merringer, Susan Eades, and Helen Link. Visitation will begin at 1:00 p.m., until time for the service.
In lieu of flowers, the family suggests memorials to the Paris-Bourbon County Library Summer Reading Program. www.hintonturner.com