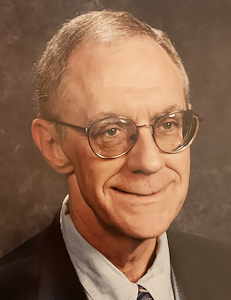 Robert Gannon Gorey passed away on Tuesday, December 14th, 2021 after a two year battle with cancer. He was born in Lexington, Kentucky on Wednesday, August 18th, 1943 to the late James L. and Margaret (O’Hearn) Gorey. Named for his relative the Rev. Robert Ignatius Gannon, S.J., Robert grew up in Paris, Kentucky. He graduated from Paris High and went to the University of Dayton for his B.S. In the summer of 1966, Robert and the love of his life Susan started dating. They married on September 16th, 1967. After graduation, he went on to serve his country in the Air Force. Robert later received Master’s degrees from both the University of Cincinnati and Xavier University.

He had three loves in his life: his Catholic Faith, his family, and his teaching vocation. Robert taught science for forty-two years; for three years at Our Lady of Angels, and for thirty-nine years at The Summit Country Day School. He had a passion for teaching and cared about his students and their well-being. With his positive personality and engaging teaching style, he endeared himself to his students and fellow teachers. Many students and fellow teachers became lifelong friends. He often said he taught life through science. He was awarded the Schilderink Chair for Distinguished Teaching at The Summit in 2001. Robert loved his colleagues and fellow teachers at The Summit. Many a day, Robert could be seen giving tours of The Summit and showing off the school. While at The Summit, he organized and ran The Adventure Club for the better part of three decades. With the Adventure Club, he took high school and middle school students on many adventures – skiing, caving, gem mining, snorkeling coral reefs in Hawaii, and more.

In his retirement Robert enjoyed attending the traditional Latin Mass, praying the rosary, reading – especially westerns, listening to symphonies, spending time with family, traveling, cheering on FC Cincinnati, and volunteering. Robert’s favorite pastime was socializing. He was a people person and loved talking to people and learning about them and hearing their stories. He especially enjoyed visiting his relatives, catching up with his former students, talking to friends, and making new friends.

Robert will be sorely missed by his family and his many friends, and former students.

Robert is survived by his wife of fifty-four years Susan (Hukill) Gorey, and his two sons, Christopher and Joseph Gorey; sisters, Helen Lyons and Alice Taylor, and many beloved nieces and nephews. He was preceded in death by brothers, James, Owen, and Edward; sister Ann Gorey Northam; nephew Bob Taylor, and great niece Addison Koch.