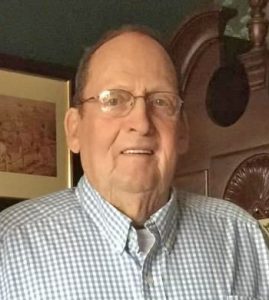 If you had the pleasure of meeting William Ray McDonald, affectionately known as Mac, you certainly would not have forgotten him. He had an infectious laughter that accompanied jovial facial expressions and a clever sense of humor that brought enjoyment to all who knew him. If laughs are a measure of a life well lived, Mac’s was off the charts. His many encounters of people who loved him began with his family and friends from his hometown in Barbourville where he was born in 1942.

He was a student of the Barbourville Independent School System where he played high school sports and was a local standout in football. His mother and father, the late Lewis McDonald and Sylvia Buttery McDonald, raised five children with immeasurable love while instilling a work ethic and devotion to family that continues through the generations of each family member.

After high school, he joined the US army where he was a drill sergeant for 5 years. His Drill Sergeant skills were engrained and practiced through the remainder of his life. This created lots of laughter for some along with anger from his wife who didn’t want to be bossed! In 1963 and at the age of 23, Mac began a career in construction starting with bridge construction landing him in Silver Springs, West Virginia. It was 1968 he met and married Carolyn Harmon from Oregon who was working at the Greenbrier in West Virginia.

A construction opportunity arose in Oregon and the two left for a new adventure. It was in Oregon Mac began an education in housing construction. The family moved back to Paris, KY after receiving a call from R.A. Williams, an old friend from Barbourville and a person needing a construction Superintendent for housing development in Paris which included Rucker Village, Williamsburg Terrace, and Thoroughbred Acres. It was during this time Mac and Carolyn also started their family. Mac then co-formed the corporation, Long and McDonald Builders. The building of houses and subdivisions expanded to North Middletown, Southern Hills, Winchester, Mt. Sterling, Nicholasville, Cynthiana, and Williamstown along with developing the mini ware houses, Heritage Plaza, and adjacent property off the Paris By-pass. Starting in 1990, Mac started his own remodeling business, Mac McDonald Builders. He also married Susan Harris. They became inseparable best friends and were gifted 31 years together. This union fostered many friendships so appreciated during Mac’s illnesses and at this time of loss. Mac had endured many serious health setbacks included surviving a ruptured brain Aneurysm and Stage One Colon Cancer. Throughout all 23 medical procedures on his body, his sense of humor was always present. “My name, and my place, and my tomb, all forgotten. The brief race of time well and patiently run. So let me pass away, peacefully, silently. Only remembered by what I have done.” -Bonar