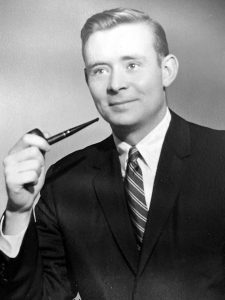 George T. Doyle, age 92, of Dunwoody, GA, passed away peacefully on January 25, 2022, with his family by his bedside. Born January 5, 1930, in Paris, KY, he was the son of the late George Lawrence (1930-1954), former mayor of Paris, KY, and Margaret Scully Doyle. He attended Paris High School in Paris, KY, and the United States Coast Guard Academy in New London, CT, graduating in 1951, with a BS in Mechanical Engineering. Upon graduation, George was commissioned in the US Coast Guard with the Rank of Ensign. His first assignment was weather patrol on ABSECON out of Norfolk followed by an assignment as XO on CGC Juniper. In December 1953 he was assigned to the Philippines working on deployment of LORAN. Retiring from active service in 1956, George served in the USGC reserves until 1990, retiring with the rank Commander.
Moving to NYC, George continued his education getting his MS in Industrial Engineering from Columbia University in 1959 and his MBA from NYU in 1964. During this time, he also started his professional career first as a Marine Engineer for Mobile Oil Co. then working at IBM where he worked in a variety of roles until his retirement in 1989 as a member of the Quarter Century Club.
It was in NYC where George met the love of his life, JoAnn Heidenreich, whom he married in 1960 and immediately started a family with three daughters, Lynn, Ellen and Susan, and their “prince”, Christopher. Living first in Queens, followed by two homes in New Jersey, George and JoAnn made lifelong friends and provided their family with a home filled with love. In 1974, George was transferred to Atlanta and settled in Dunwoody where he fulfilled his boyhood dream of coaching youth football and baseball at Murphy Candler Park and basketball at St. Jude Catholic Church. After retiring from IBM, he worked for a small computer company and taught computer classes at a local community college before fully retiring in 2000. He was a founding member of All Saints Catholic Church, a member of the Knights of Columbus and an active parishioner at St. Jude Catholic Church.
George and JoAnn were married 56 glorious years. His later years were spent with JoAnn traveling the world and spending time his family. He and JoAnn travelled frequently to Europe, including many trips to his ancestral homeland, Ireland. They visited exotic locales like Israel and Egypt, and traveled the United States extensively.
He is preceded in death by his parents and his beloved JoAnn. He is survived by his children, Lynn Hicks, Ellen Whitley (Chris), Susan Summers (George), Chris Doyle (Mary), his grandchildren Carrie Hicks, Jeanne & Jack Whitley, Taylor & Ryan Pahl, Riley, Ben & Aidan Doyle, his sister Ann Marie Gilvin and numerous cousins, nieces & nephews.
The family would like to extend their sincerest gratitude to his care givers Nellie, Carole, Elza, and Hannah and to Long Leaf Hospice. A celebration mass will be held at St. Jude Catholic Church, Sandy Springs on March 11, 2022 at 10:00am. In lieu of flowers the family requests donations to St. Vincent de Paul Society, St. Jude Chapter, 7171 Glenridge Drive, Sandy Springs GA 30328. Funeral arrangements are entrusted to Fischer Funeral Care and Cremation Services, Chamblee GA.