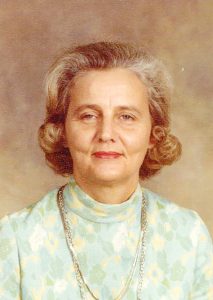 Alma was a civic leader as co-founder of the Paris-Bourbon County League of Women Voters where her roles included President, Vice President, and Secretary. She also cam corded many civic meetings to keep the people updated on Paris and Bourbon County news. She was a charter member of the Bardwell Homemakers being secretary many years. She was co-founder of the Operation Food Basket with Sarah Frances Swinford back in the 80’s, and served as the board secretary, as well as working as a volunteer handing out food to the needy. Alma served several terms on the Blue Grass Community Action Board, being appointed by Judge Donnie Foley. During that time, she was presented the H.H. Greene award for being a board member and being civic and community minded. She loved her church – First Christian Church (Disciples of Christ) in Paris, serving many capacities from Chairman of the Board for two terms, Sunday School teacher, Secretary and President of the Agape circle, Deacon, Elder, Elder Emeritus.

Services for Alma Boardman are entrusted to Hinton-Turner Funeral Home and will be held at First Christian Church in Paris on Monday, February 28, 2022. Visitation will be from 11:30 a.m. until the time of the service at 1:00 p.m.

Services for Alma will be at the First Christian Church, 911 High Street, Paris, Ky. Burial will follow at the Paris Cemetery beside her beloved Tommy.

Services will be led by Rev. Jeff Bell and Dr. Henry Hanna.

If you wish to give a memorial, it is suggested to: First Christian Church Living Memorial, the V.F.W., St. Jude’s Children Hospital, or League of Women Voters U.S. www.hintonturner.com